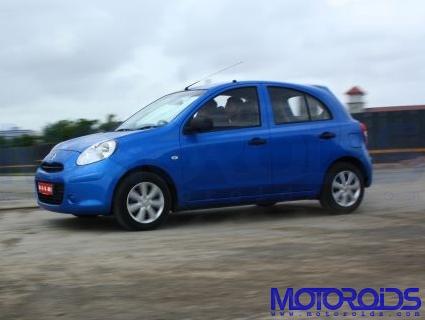 The 2010 Nissan Micra has undoubtedly been one of the most awaited small cars this year, not just in India but throughout the world. From shutting down the Micra production line in Sunderland, UK, to developing an all new platform for the new car, the Micra has been continuously in the news. So after months of waiting and the Japanese small car’s public unveiling at the Geneva Motor Show, we have finally got our hands on one these bubbly Nissans. So is the Micra worth the wait? Let’s find out… 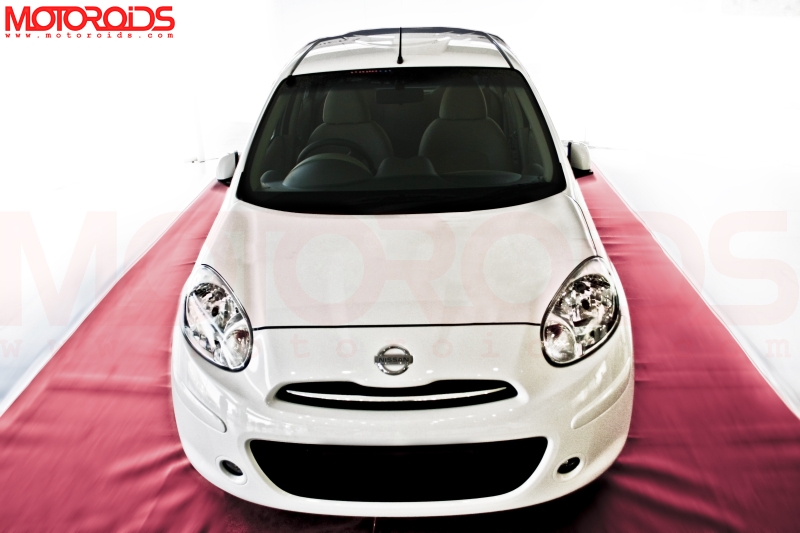 The 2010 Nissan Micra for India

To some the Micra looks like an evolution of the Volkswagen Beetle; while on the other hand some feel the car looks like a scaled down Porsche Cayenne; some even tell me that the Micra looks like an obese Maruti Suzuki A-star! You have to agree that all of them are right from their own perspective. The Micra has a bubbly design theme to it – the headlights, the windows, the overall shape of the car – it all looks like a bunch of soap bubbles stuck together. The K13 however looks much better than its predecessors and as Nissan wants it, the Micra WILL cater to the male as well as female customers. The unisex design then isn’t only about form but also about function (more on that later).

Fortunately for India, the Pista Green colour that was shown in the ‘Press Images’ sent out during the Geneva unveiling, won’t make it to the showrooms. Especially in the bunch of Figo and Spark greens, the Micra’s shade looks absolutely hideous! The car we sampled was white in colour, which looks decent – however if I were to buy one, I would prefer the copper. 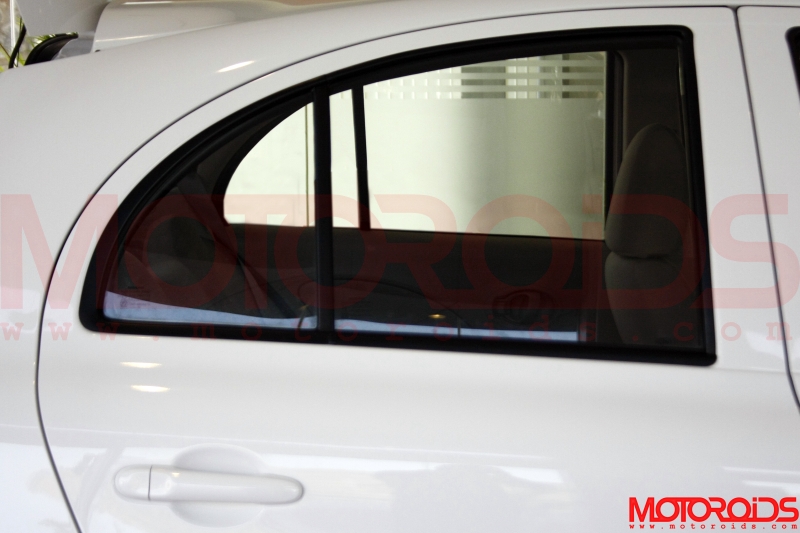 The rear window is large, giving a sense of increased roominess to the cabin

The headlight isn’t some radical design, but contributes to the unisex design of the car

To the untrained eye, the Micra’s taillights look like that of the Alto

The interiors of the car follow a similar bubbly theme as is evident from the photos. Thanks to the fairly tall roofline of the car, the interiors feel roomy. The large rear windows are welcome again after being exposed to the claustrophobic windows of the Hyundai i10 and the Maruti Suzuki A-star. The V-platform, with its compact suspension components and wheels-at-the-corners design, has allowed the Nissan engineers to pack in a lot more cabin space than what the exteriors of the car suggest. The rear seat hence, has enough padding on it to accommodate two adults and an early-teenager without poking into each other’s shoulders. While the interior design is innovative and comfortable for the occupants, the quality of plastics isn’t something you would expect from a car that is going to be exported to over 160 countries. We are however told that the car we sampled was hand built as a preview vehicle and the production model will be a lot better – and we would like to believe Nissan on that. 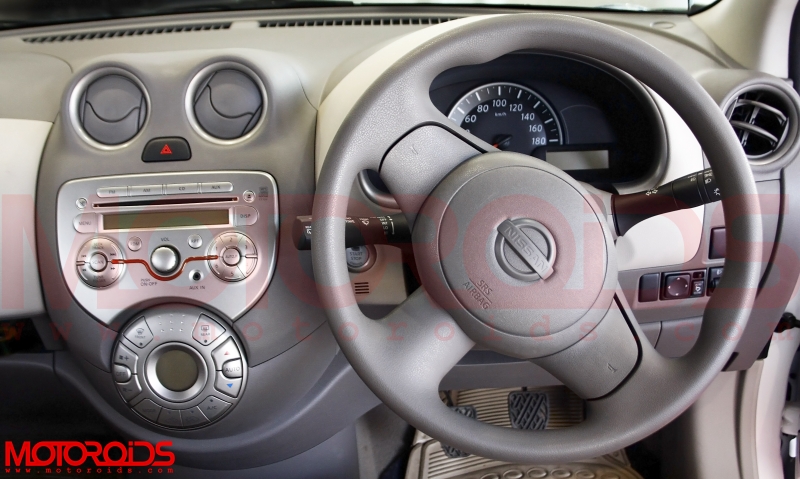 The bubbly theme is carried over to the interiors as well 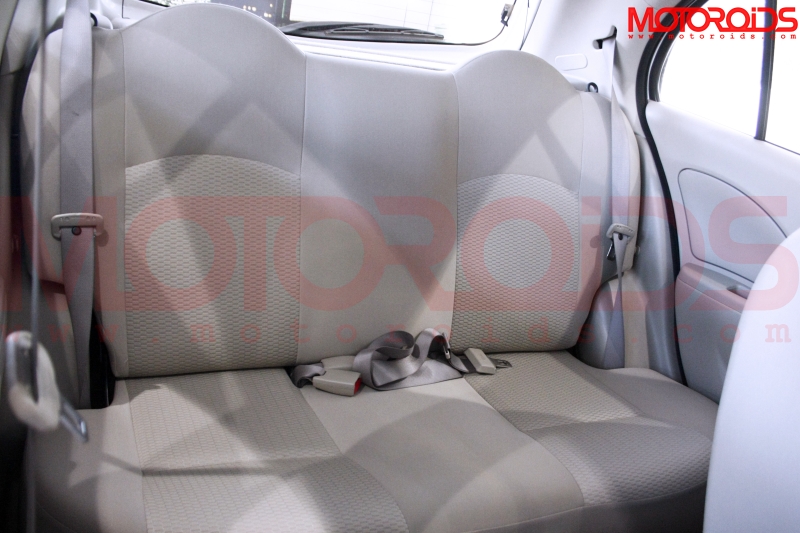 The Micra offers a few ‘firsts’ for this segment of cars. The most prominent being the keyless ignition (and entry of course!) – with the next car being the 13-lakh rupee Chevy Cruze to boast of such a functionality. The other unique feature that we like and would applaud Nissan for, is the inclusion of a driver side airbag even in the base variant. The base variant also gets some useful goodies like a trip computer, keyless entry with central locking, power steering, power windows with anti-pinch functionality, engine immobiliser etc. The top end variant gets some more sophisticated stuff like electric adjustment and auto-fold mechanism on the ORVMs, push button ignition, integrated audio system, ABS, EBD, passenger-side airbag etc. Nissan has packaged all the three variants viz. XE, XL, XV very wisely and has made sure that even the customer buying the base variant won’t feel cheated or under-privileged as he or she would in most of the competing ‘base-models’ around…

Electric windows are standard on all variants. The roundish door handles look fresh

Ample legroom and headroom. Backseat headrests could have been a tad higher 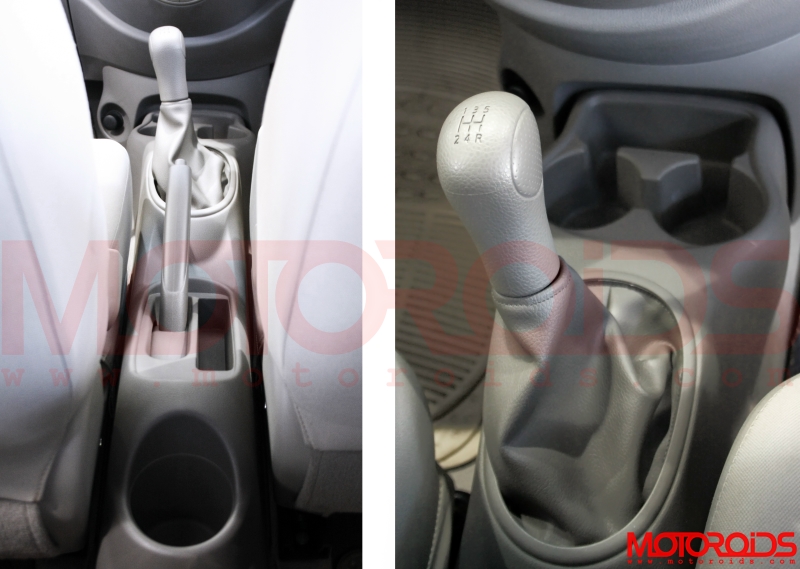 Gear shifter not as fresh as the rest of the design

The Micra is powered by a 1.2-litre (Engine Code: HR12) 3-cylinder petrol engine that churns 76 PS. Though this engine is a three-pot mill like the A-star or the Wagon R’s K-series engine, it is a lot more silent than the Suzuki – not only inside the car, but outside as well. However, just like the Suzukis I mentioned, this car too is plagued by the peaky nature of the engine. With the 75 odds horses dialled in at a whooping 6,000 rpm, the Micra suffers from a sluggish low end – and it is quite evident in the roll on times that we got (refer to the end of this page). But this isn’t a sporty car mind you, like the supercharged model that will be exported to the UK. 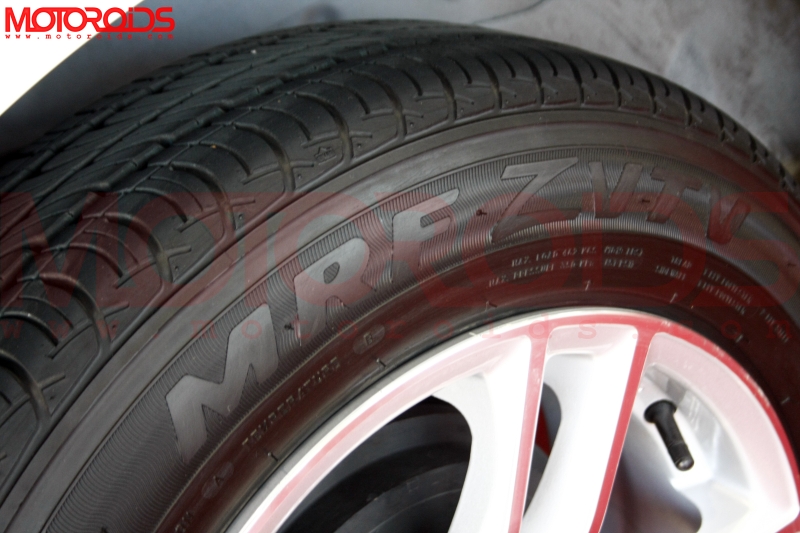 The MRF Zapper ZVTV offers decent grip for city use

The Indian version is tuned for optimum fuel efficiency, lesser emissions and being a reliable city car than a being a hot hatch that will send your eyeballs to the back of your head. The results are clear – an ARAI backed figure of 18 kmpl! We expect it to drop by 2-3 kmpl when the average Joe (or even ‘Joan’ in this case) is driving it in congested urban environs. Should you decide to go pedal to the metal, the figure may come down to 11-12 kmpl and at the same time, give you a 0-100 km/h sprint in 16-odd seconds. 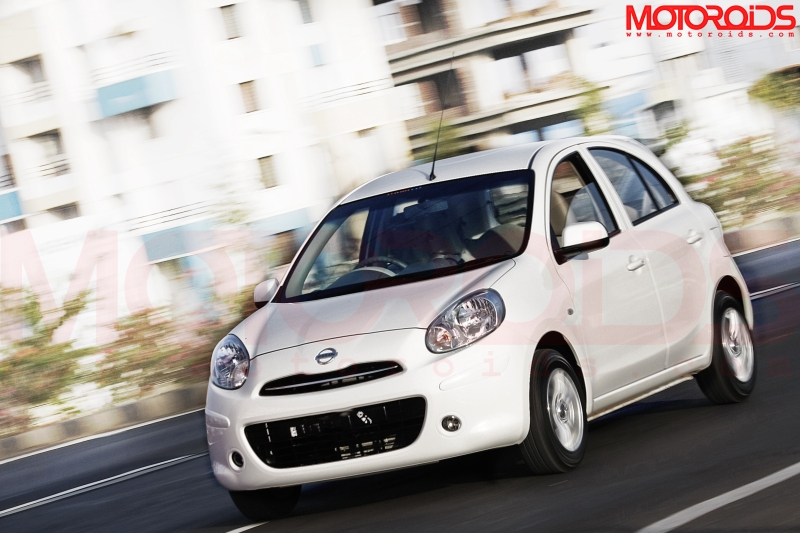 The lengthened wheelbase of the Micra has given the car good stability when driving at high speeds. It could have also imparted better dynamics around corners, but then the suspension plays spoil sport. In a bid to provide better comfort on Indian roads, the Micra’s suspension runs on a soft setup. This tends to give a squishy feedback when driving the car hard around corners. The MRF ZVTV rubber does save the day to and extent, but our enthusiastic nature would have liked the handling to be better, stiffer. But on the other hand this compact suspension specifically built for the V-platform is a potent bugger and seems to understand the Indian road conditions very well. Even on potholed roads, there is no hint of thudding.

Roll-on figures for the Micra: 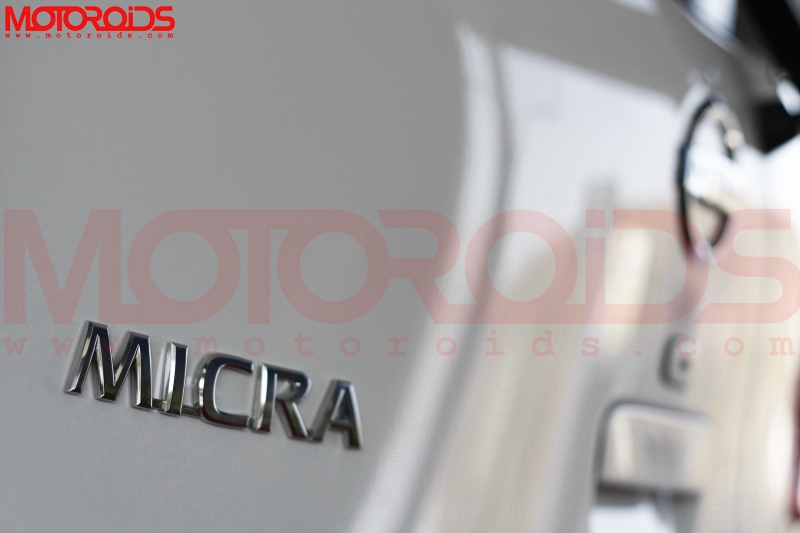 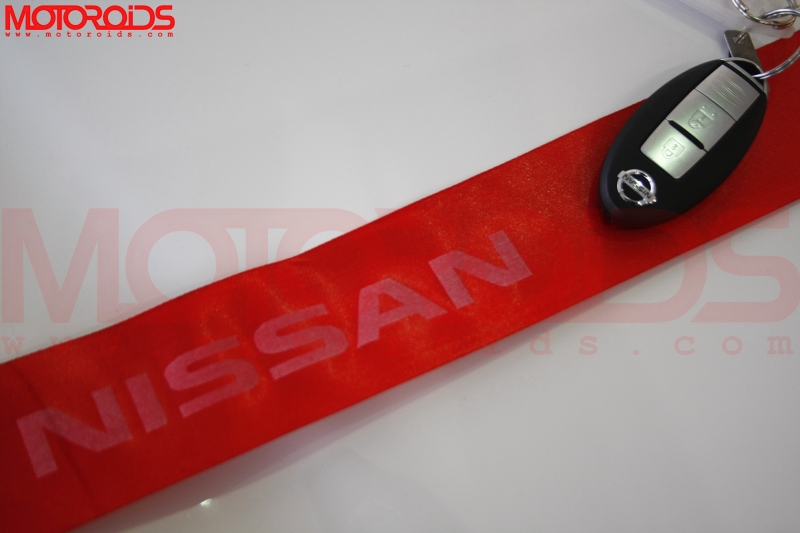 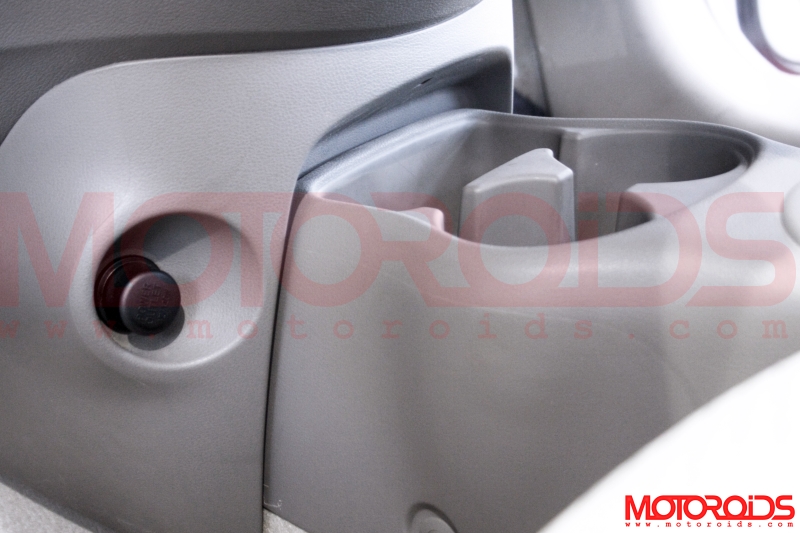 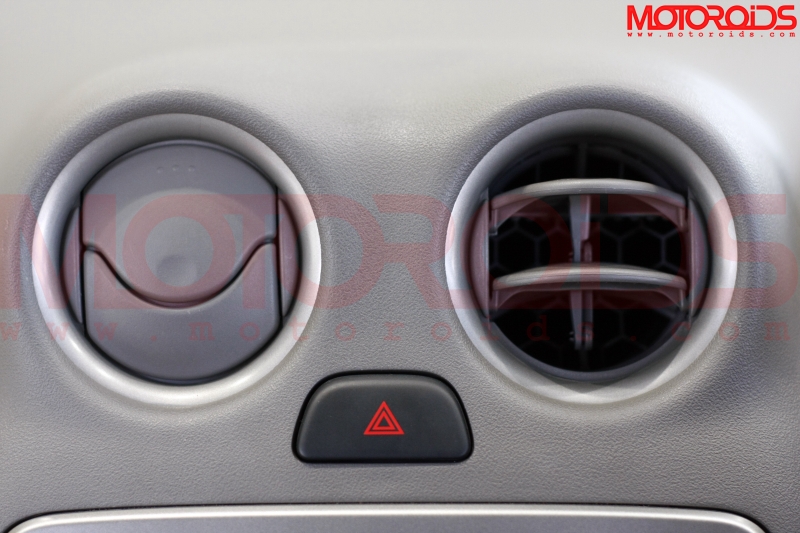 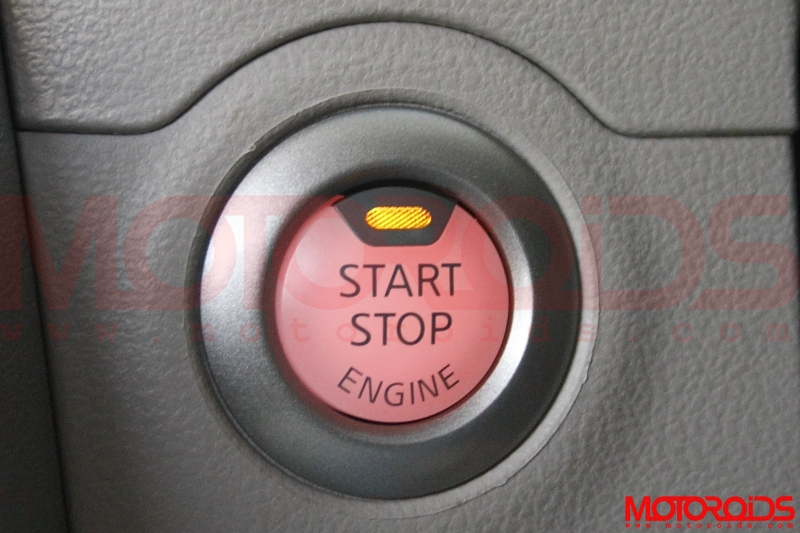 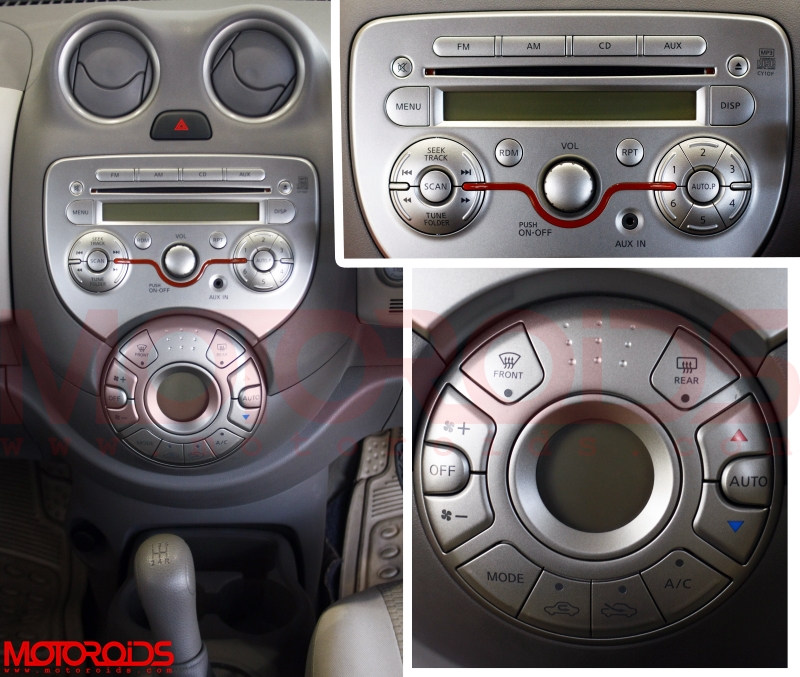 With an on-road price that will range between Rs. 4 lakh to Rs. 6-lakh (Pune), the Micra seems to be a worthy competitor in the bunch of heavyweights that are dominating the evergreen small car segment in India. It is pretty evident with the 1,500 pre-launch booking of the car! However, the tax bracket has once again taken a toll on what could have been an enthusiast’s car, and what we are left with is yet another small car with a puny 1.2-litre engine. However, the Micra holds its ground (and rather strongly) with a fresh unisex design, a lot of functionality and features cleverly packed throughout its variants and more importantly – the trademark Japanese reliability that you can expect form a brand like Nissan. And since it’s the Japanese giant’s first (and most awaited) mass-production offering for India, all of us can rest assured that the Micra could be a serious game changer in the times to come. Or will it? Stay tuned to Motoroids.com as we soon announce the Micra’s battle with its cheapest nemesis – the Ford Figo!