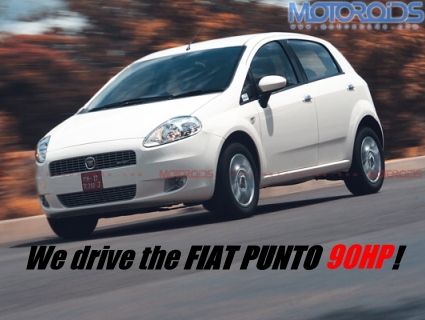 While Maruti Suzuki still continues to reign the hatchback market in India, the premium hatchbacks from other European (and Korean) carmakers are slowly and steadily setting up a firm base in India. One of the front runners of this league is the FIAT Grande Punto – a hatchback that was solely developed with the intention of driving FIAT out of its recent global downturn; and at the same time, maintain the emotion that one relates to a FIAT product. In India, the Punto has completed an year of existence and though it hasn’t exactly been a high roller for the company, it has established itself as a niche product in India’s hatchback circus. The Punto is available in the country with three engine options – 1.2 / 1.4-litre petrol and 1.3-litre diesel. However, with the competition around the Punto increasing by the day, and players like the VW Polo and the Hyundai i20 making life harder than ever, FIAT has decided to launch another variant – the much talked about, gruntier, torqueier, more powerful ‘Punto 90hp’. And guess what, we have driven that car already! Read on to know what our impressions are about the new Punto variant…

Scroll to the next page to know more about the Engine, drive and handling

Simply put, the new ’90HP’ variant of the Punto is the output of smart platform sharing. The engine block on the 90hp variant and the regular 1.3-litre Multijet variant currently sold is the same; the ‘new’ engine however gets a variable geometry turbine (VGT) and different state of tune for the ECU, essentially meaning that this is the same mill that propels the Linea diesel. So has this transplant translated into a better performance? You bet! It is a no-brainer that the Punto being a hatchback derivative of the Linea sedan, is a lighter vehicle (100 kg at least). So what this translates into, is a better power to weight ratio (almost 12bhp-per-tonne more) which not only aids in better acceleration but better fuel economy as well.

We drove our sample car for approximately 70-odd kilometers. These included open highways with the occasional congested stretches and even more congested urban roads near Ranjangoan. Even the new Punto is reminiscent of the diesel burble that all the Multijets emit. However, the cabin on this version is quieter than the 75hp, thanks to its better noise, vibration and harshness insulation. Like any other FIAT, this car’s clutch pedal too needs getting used to, but once there, it definitely feels lighter than the other brand’s cars selling in the same showrooms. To be frank, it is very hard to tell the difference between the 90hp and the 75hp versions when crawling through the city traffic. The 90hp engine is definitely smoother off the line than its 75hp variant, and the variable geometry on the turbocharger eases the initial turbo-lag as compared to the fixed geometry turbocharger (FGT) on the 75hp. Expect your overtaking manoeuvres in the cityscape to get a tiny bit quicker.

The Punto offers phenomenal ride and handling characteristics for a hatchback

On the highway however, the 90hp outshines its smaller variant by a significant margin. Hit the pedal to the metal and the Punto will make you feel the new turbocharger kicking-in with a lot more punch. It doesn’t have the acceleration to send your eyeballs down your throat, but its 1.5-seconds quicker 0-100 km/h acceleration over the 75hp model, is enough to bang your head on the headrest every time you shift gears. What is a tad irritating though is that your head repeats the same action in opposite direction when you are down-shifting. Our shorty photographer would have surely banged his head against the steering wheel if he wasn’t wearing the seat belts. So probably that’s FIAT’s way of ensuring that you wear your seat belts every time you decide to drive the Punto 90hp.

The unsettling done by the acceleration and deceleration forces is only restricted to your head position though. Thankfully they don’t initiate any kind of body roll on the car. Even around bends, the car holds its line very well and the 195-section tyres offer optimum grip. Speaking of which, the 90hp engine will only be available on the ‘Emotion Pk’ variant as of now, which means that your car WILL come with the 195-section rubber as opposed to the 185-section tyres on the lower variants. The braking system by Galfer is top notch too and thanks to the rainy season around, we even had a chance to test the ABS quite a number of times on wet, greasy and gravely surfaces during our test stint. After all the thrashing around, the car returned a fuel efficiency figure in the range of 16-17 kmpl. Expect it to be even better with the kind of ethical driving you would do with your own car.

Whether you are a hardcore motoring enthusiast or a mere commuter from whom a car is just a convenient means of transport – the Punto will look outstanding to you, no matter which angle you look at it from. Unless of course, you are a self-proclaimed critic who loves to criticise everything that come along. The typical Italian styling holds its ground very well even though the initiated crowd thinks that this car looks a lot like the Tata Indica. The new variant carries forward all the external design elements that you find on the regular Punto without any modifications. The only addition to the exterior being the ’90 HP’ monogram on the tailgate and the chrome garnish on the door handles.

The 90hp is available only in Emotion Pk, meaning you get the acclaimed Microsoft Blue-and-Me as well

The interior get minor tweaks which may go unnoticed to the untrained eye. Since most consumers and critics complained about the poor quality of plastics on the dashboard, the new Punto gets a better, smoother, finish on the plastics and the grain size on the texture has been made finer to make them feel upmarket. The upholstery gets red stitching on the seams and the infamous ‘dot man’ (the stylistic ‘P’ in the Punto Logo which appears like human figure in a driving position) embroidery uses a red thread too. The inclusion of the red thread on the black/grey fabric gives the interiors a sportier feel. This car however isn’t a true blue ‘Sports’ variant, neither does it claim to be one, so there aren’t any modifications to the seats or any other creature comforts available in the car.

The seats get red stitching (more on the next page)

Scroll to the next page for more Detailed Images

Unlike the earlier speculations, there are no changes to the headlights or taillights

No changes to any switches

The Punto 90hp is expected to go on sale in the second week of July, 2010. The expected ex-showroom price is in the range of Rs. 6.75-6.85 lakh. Being available only in the ‘Emotion Pk’ variant, the 90hp model will come with the acclaimed Blue-and-Me ready audio system, ABS, Dual Airbags, alloy wheels, 195-section rubber, fog lights etc. Furthermore, the new car now gives better power and improved quality on the plastics – the lack of which were the two main factors that the consumers complained about. So essentially, this car is the complete package that you expected out of the Punto. If decent power, good fuel economy, cheap cost of spares, great drivability, Italian styling and an improved after sales service is what you are looking for in a diesel hatchback, then this is the car you should put your money on. Would I buy it? Probably I would wait for a more rev-happy Punto 1.4 T-jet to come along!