Abarth, born in 1949, was a popular, Italian sports-car manufacturer, taken over by Fiat in 1971. Today, Abarth is a fully owned subsidiary of Fiat Chrysler Automobiles, and puts its old sports-car making expertise into hotting up everyday Fiats. We take a quick spin in Fiat’s cheeky little Abarth Punto, developed specifically for the Indian market, to gets a taste of India’s fastest (and most powerful) mainstream hatchback. Samar Narayan reports from New Delhi – 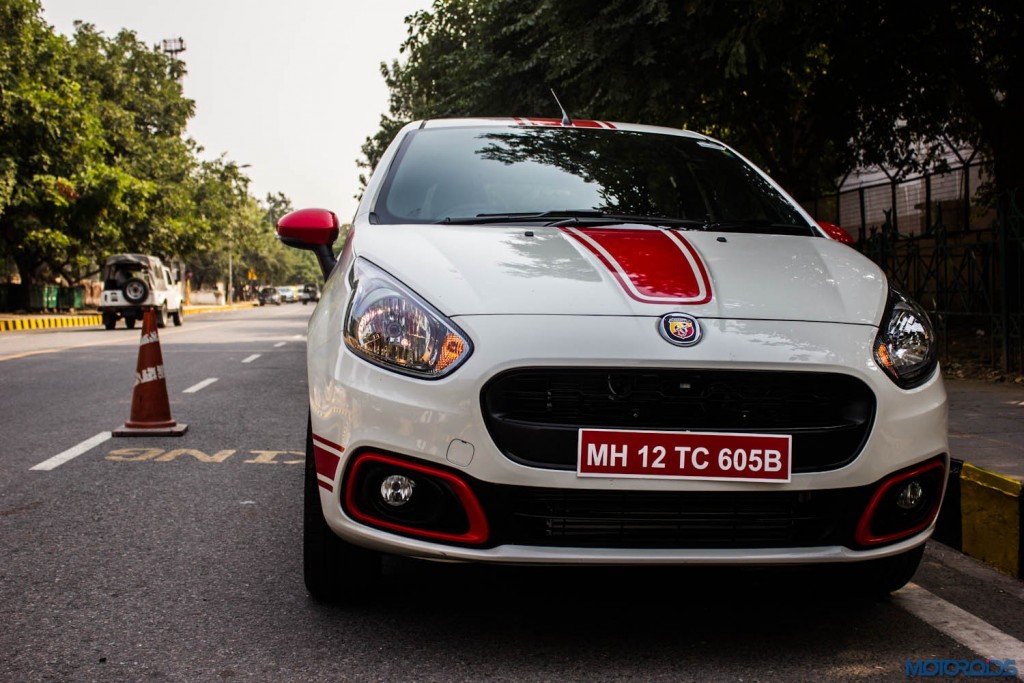 The advertisement for the new Abarth Punto reads “The steering wheel isn’t just for steering. It’s for holding on.”

The new Abarth Punto has been launched with the 1.4-litre T-Jet engine pumping out 145 Italian stallions, and claiming that the car can hit the tonne from a standstill in about 8.8 seconds. These are proper hot hatch numbers and something which was long due for the eager Fiat enthusiast. There was a time when cars with great engines used to be launched for the petrol head on a budget. The first generation Honda City VTEC and the Fiat Palio 1.6 gtx are a couple of them that come to the top of the head. Off late, the river has run dry and there has hardly been any car appealing to the petrol head, as most have been centered on fuel economy, creature comforts and other mass pleasing stuff. Finally Fiat has broken the rather long monotony by bringing out the Abarth Punto. 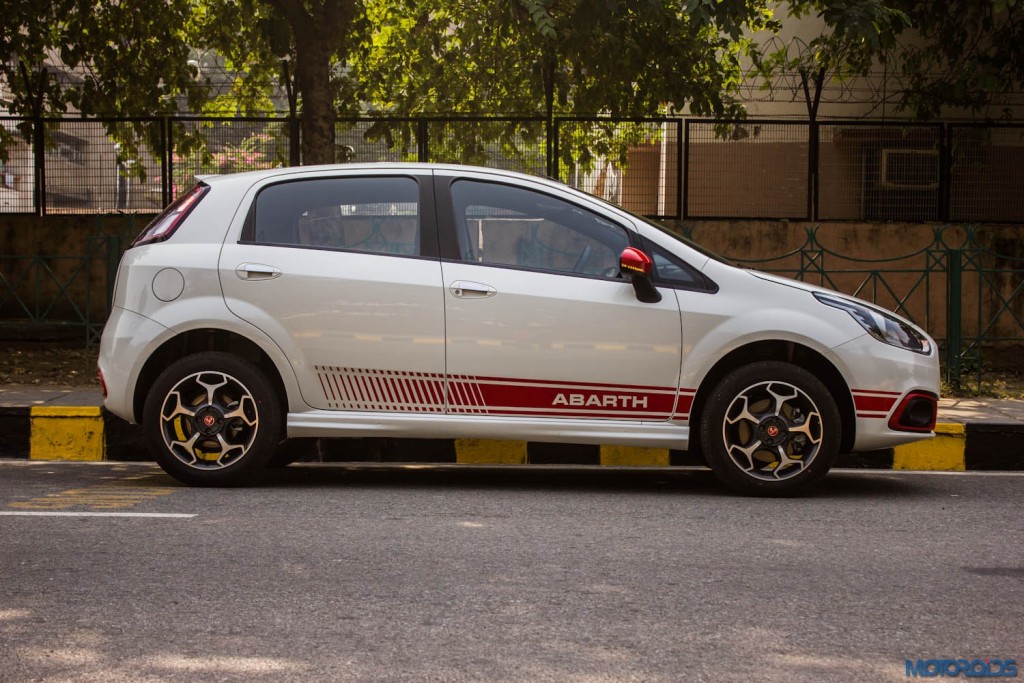 Step into the car and you’re greeted by Abarth’s scorpion themed logo sitting dead centre on the steering wheel, while the dials have a nice yellow red theme to it based on the Abarth logo. In fact you’ll find the Abarth logo in every nook and cranny of the car, from the tasty 16-inch wheels, to the metal pedals, to the stripes on the side and roof of the car, reminding fellow motorists that this is no ordinary Punto, but something which means business. 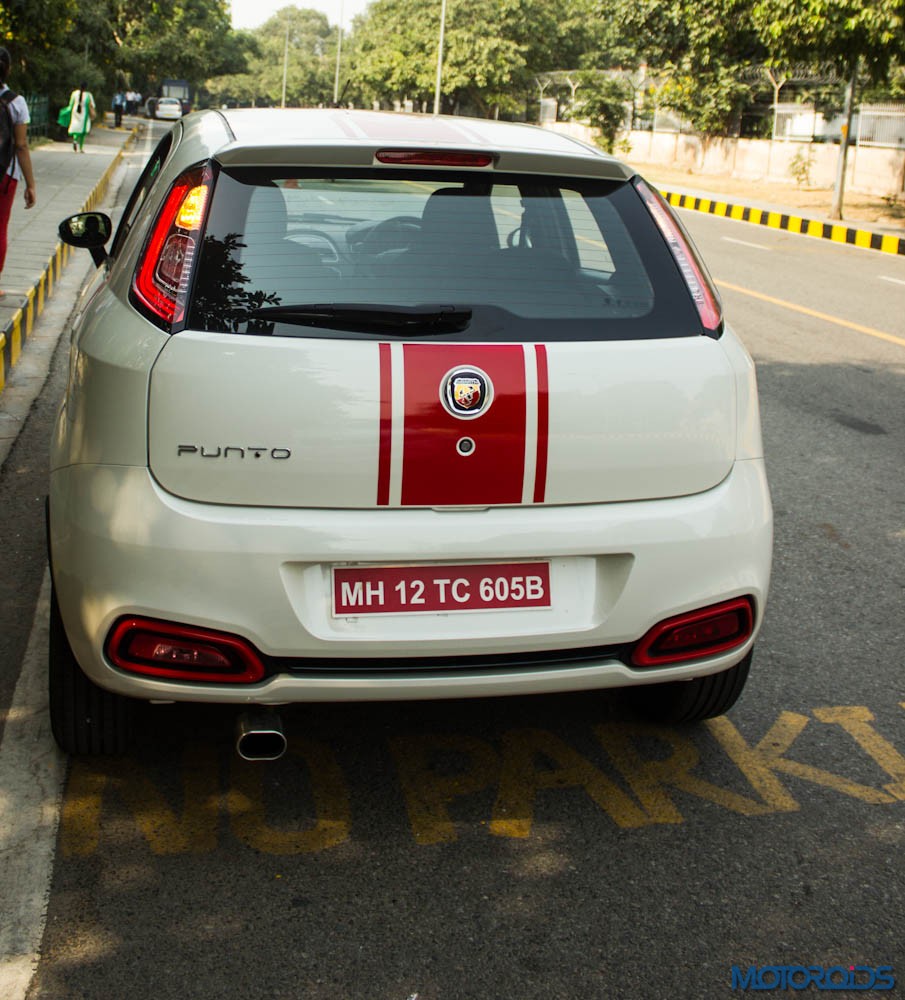 Start the car and the engine settles down to a nice throaty hum; no Japanese or Korean efficiency themed purr. The clutch is super light and once you start rolling, the car just makes you grin ear to ear. The acceleration is quite linear for a turbocharged petrol motor, although you do get a really nice, trademark “whoooooosh” as the tachometer needle works its way up! From around 2k rpm all the way until 6k rpm after which it again flats out. The advantage of having this is that in normal traffic all you need is just a slight tap of the throttle. Need to overtake that large truck up ahead? No sweat, just tap the throttle and away you go. There is no need to downshift at all; the torque spread is nice and even. 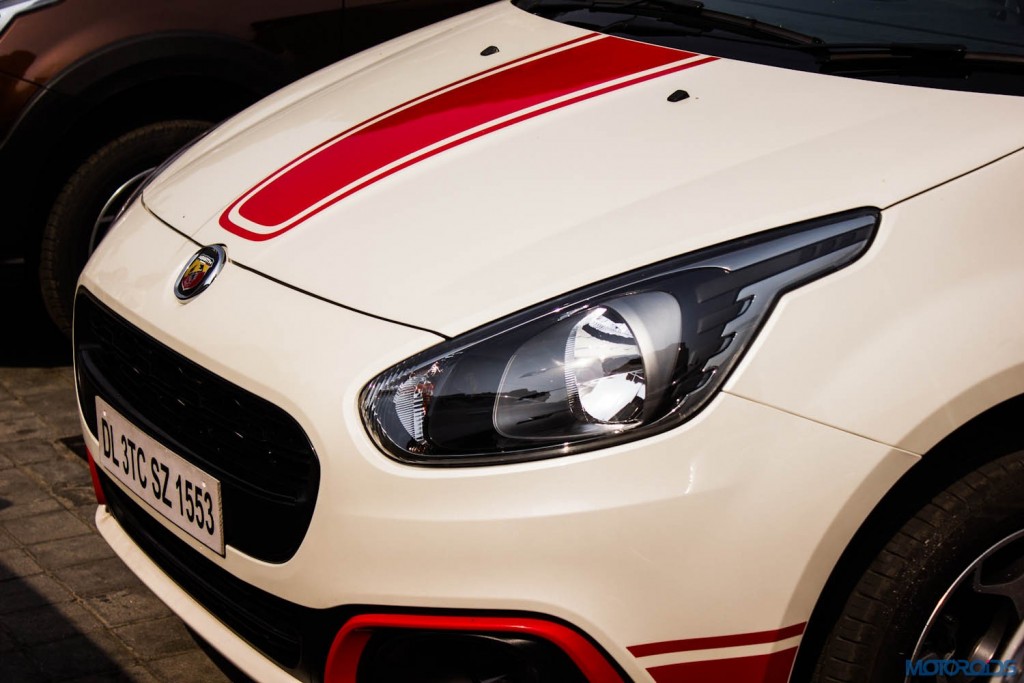 And that speaks a lot about the practical nature of the car – you have a five door hatchback with rear AC vents and all the niceties on offer including climate control, Bluetooth control from your phone, steering mounted controls. And a really nice ARAI mileage of 16.3 kmpl which is not bad at all considering it’s a performance hatch. The only area where you might notice that this car is not just an average Punto from the inside is the slightly stiffer suspension and a bit lowered ride height. Apart from that it’s an extremely practical daily runner which you can use to go the mall. But let us end the Jekyll side of the car over here and talk about the Hyde side. 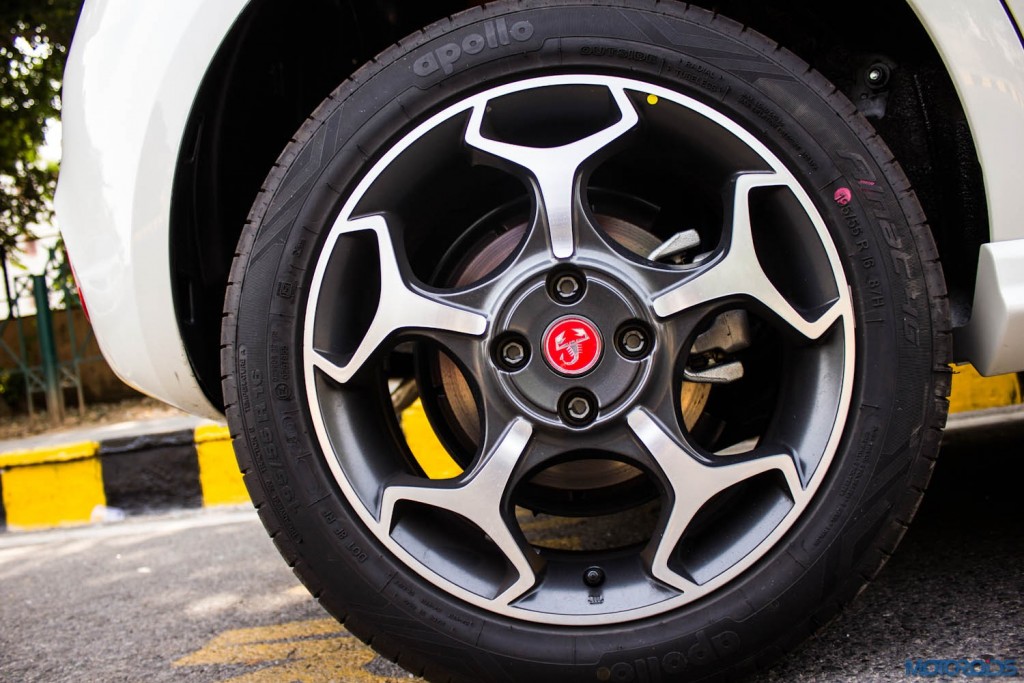 Launching from a standstill, if you floor the throttle, you really need to hold on to the steering wheel because there is a fair amount of torque steer turning the car to one side, switch to second and it’s still there although now it does taper off soon. Apart from holding on to the steering wheel you’ll notice that you’ve hit the tonne pretty soon. A couple of rough runs and I was hitting the tonne in 9.5 seconds, which is really remarkable and I am sure Fiats claim of an 8.8 0-100 should be true. However you really aren’t aware of the speeds you’re doing because of the solid planted ride of the Abarth. All you feel is a satisfying surge of power and away you go. The other thing which really shines out is the amazing braking power and feel of this car. The all wheel discs, coupled with ABS and EBD, make the car stop really soon and true. There is no drama once you brake, with the car following a straight line when the anchors are dropped, which gives a lot of confidence to the driver. With the retuned suspension being on the stiffer side, taking a corner is an absolute joy ride with the car hugging the road confidently and firmly. The hydraulic steering unit of the Punto also gives great feedback and you can feel exactly what the front wheels are doing. A ground clearance of 155mm also helps in the flat cornering abilities of the car. 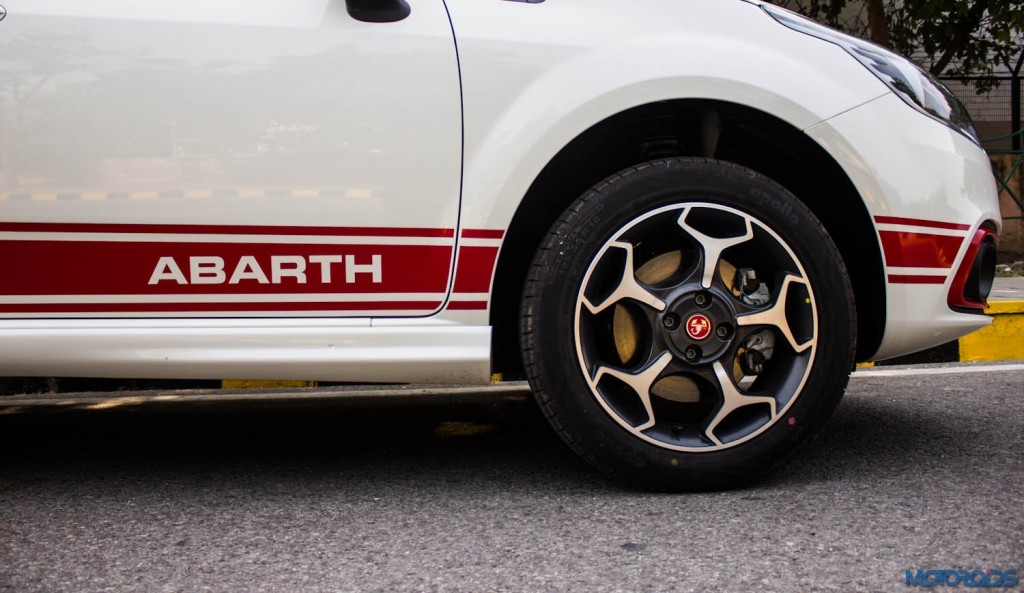 All this combined provides a really great driving experience for any petrolhead. Except for one really annoying fly in the ointment. It’s the rubbery feel of the gearbox. The same problem which has plagued all the Puntos, has been carried over to this. Not that the gears don’t slot in properly or the ratios aren’t good. It’s just the shifting feel which is missing from an otherwise soulful car. And that really gets my goat. Everything in this car is perfect, from the power to the brakes to the handling to the way it engages the driver. But the moment you shift a gear, you just feel like they’ve been a little lazy in ironing out the gearbox issues. 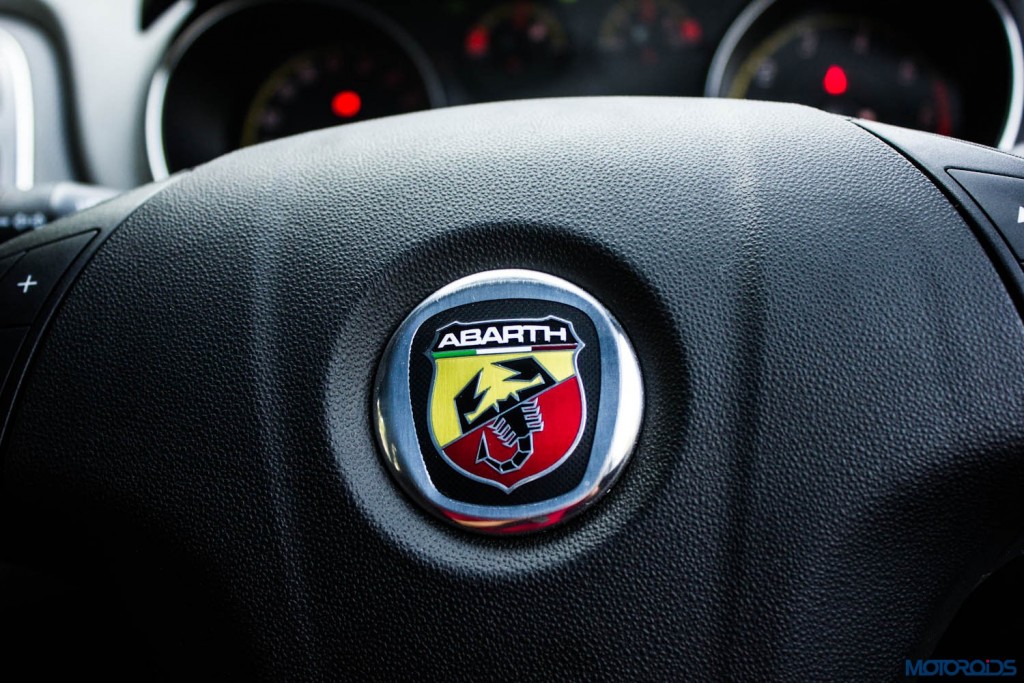 At a price point of INR 9.95 lakhs (ex showroom Delhi), Fiat has managed to keep it under the INR 10 lakh price tag that many were hoping for. The car is a great combination of having fun behind the wheel while also being a practical hatch for the city. For many diehard Fiat fans this is the true successor to the Palio 1.6 GTX, and rightly so, the car is blazingly fast and has opened up a new and much needed segment in our car market, and one which sums up the car in just two words. A Hot Hatch. Stay tuned for a detailed review soon!