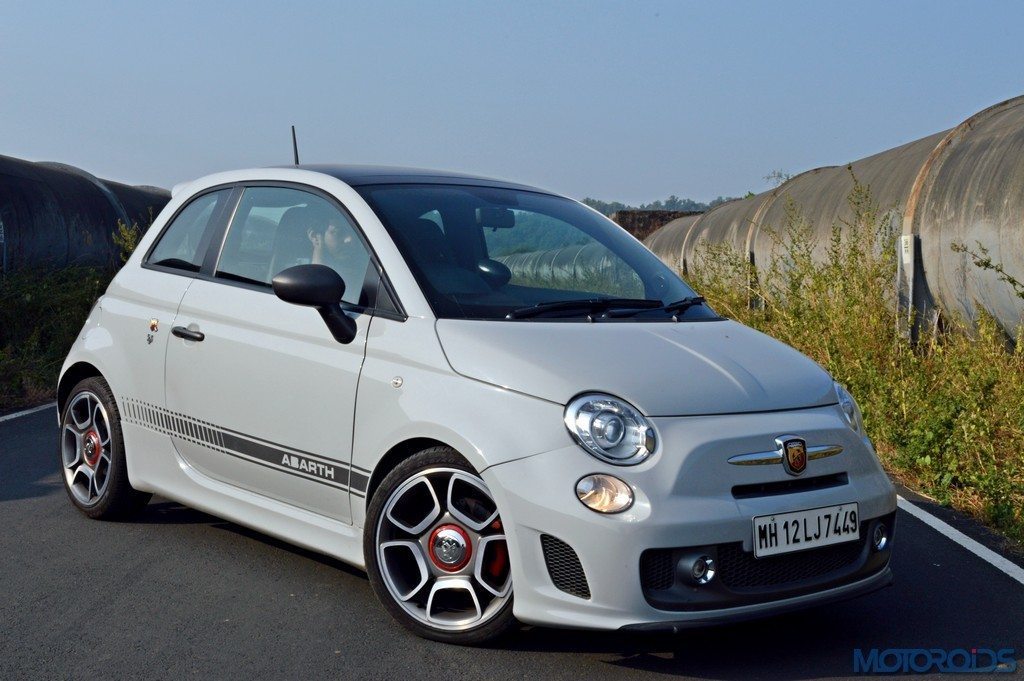 Late on Saturday night, I parked the new Abarth 595 Competizione on Marine Drive, and got out hoping to catch the smell of the sea. But all the thick, moisture laden breeze got me was the customary stench of the island city instead.  Disgusted, I looked back, only to find a small crowd had gathered around the car. It made me feel better, as its effect on India’s demographic had turned out to be quite positive so far. 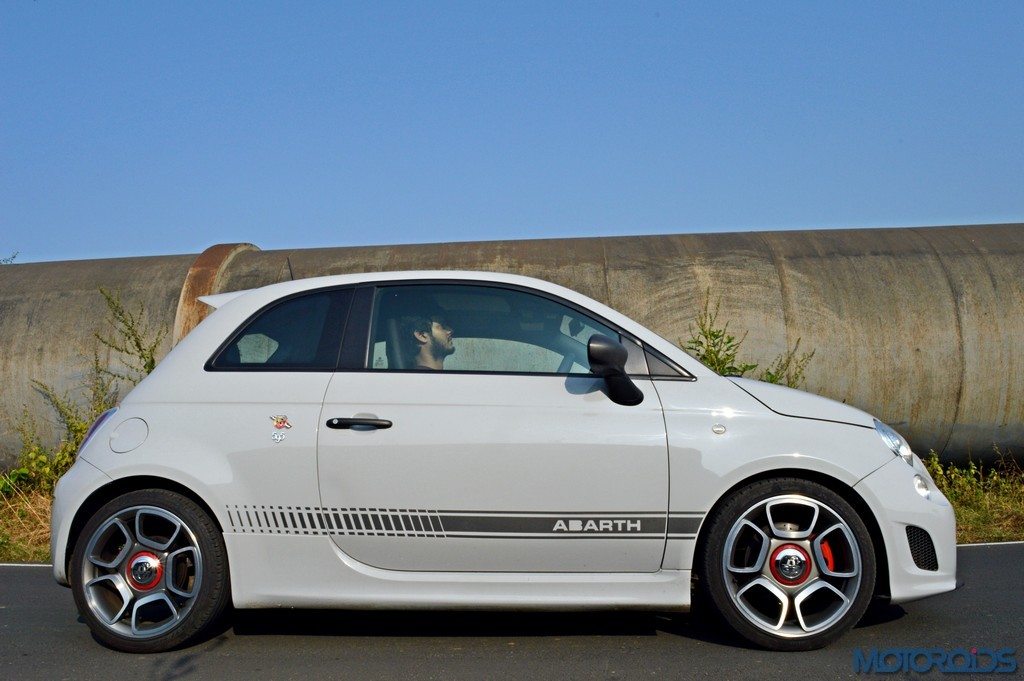 The Competizione badge is stuck on one of the three Abarth 595s available in international markets; the other two being the Touring and the top of the line 695 Biposto. Nobody spares a second look for a Mini Cooper these days, at least in a bustling metropolis like Mumbai, but get rolling in one of these, and out pop the inquisitive eyes or the odd question. That’s because the Abarth looks special; every inch of it. 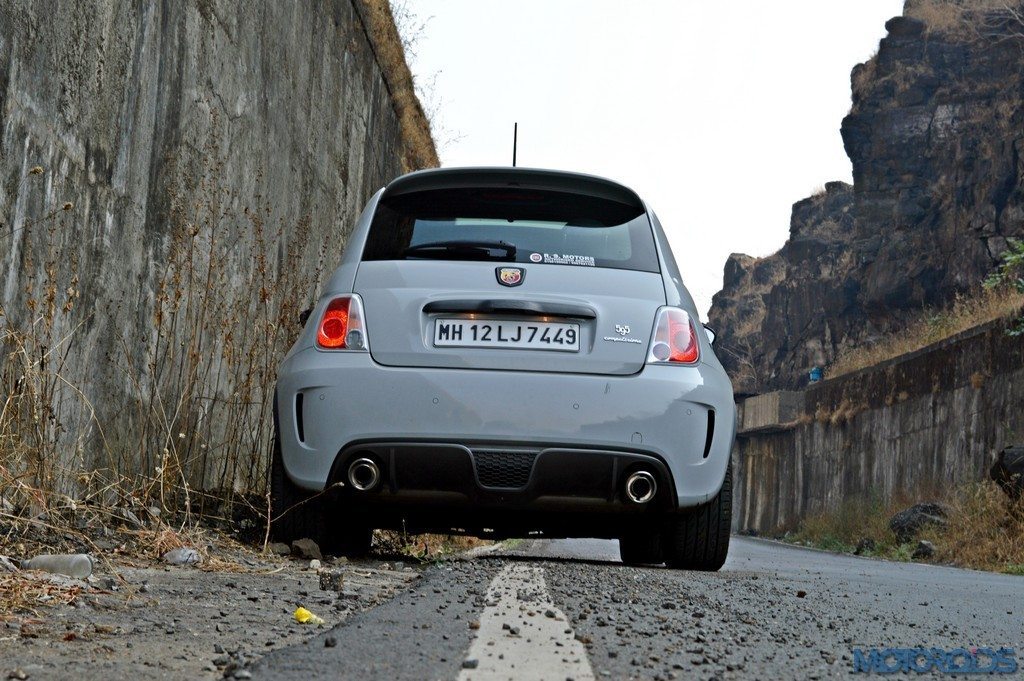 The Fiat 500 is like that giant panda stuffed toy that your girlfriend cuddles with when you aren’t around. Stylistically, it’s an ode to the good old 500, with every curve and crease in the body reminiscing the original’s appearance.  To the babe that the Fiat 500 is, Abarth fed small vials of testosterone. The resultant 595 Competizione has got the 500’s cutesy features all right, with aggressive detailing that hint at the underlying snarl. 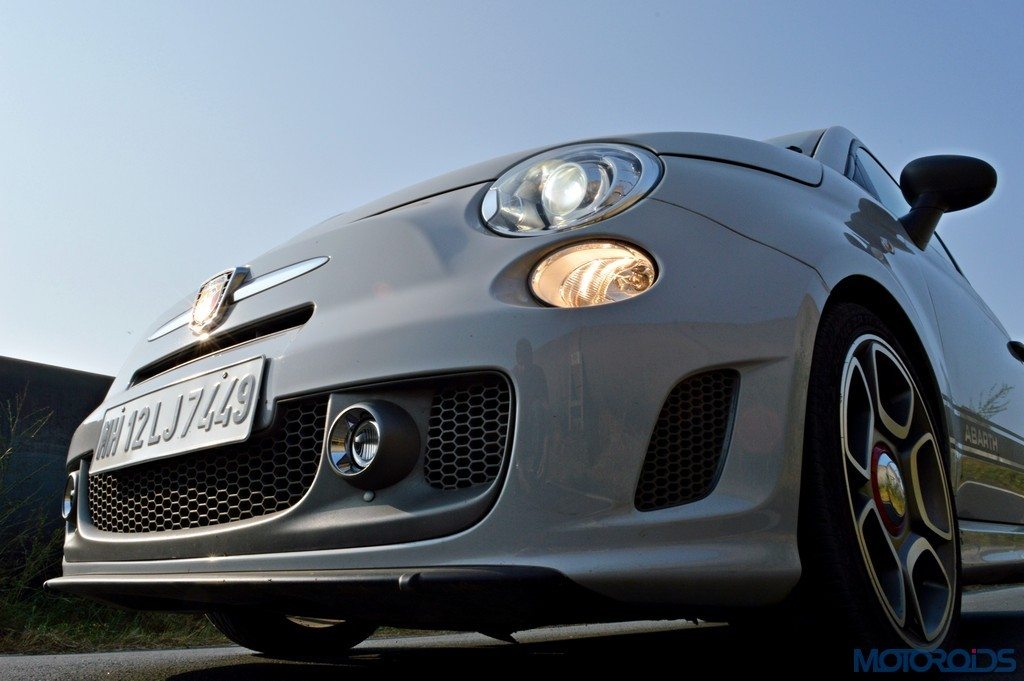 Compared to the standard 500, the Abarth 595’s front bumper gets bigger air inlets, while acres of mesh keep the flies out. The rear bumper is sportier too, with two slits at each end and a diffuser in the middle that hosts the twin exhaust tips. There are healthy side skirts as well, overwhelming the short wheelbase. 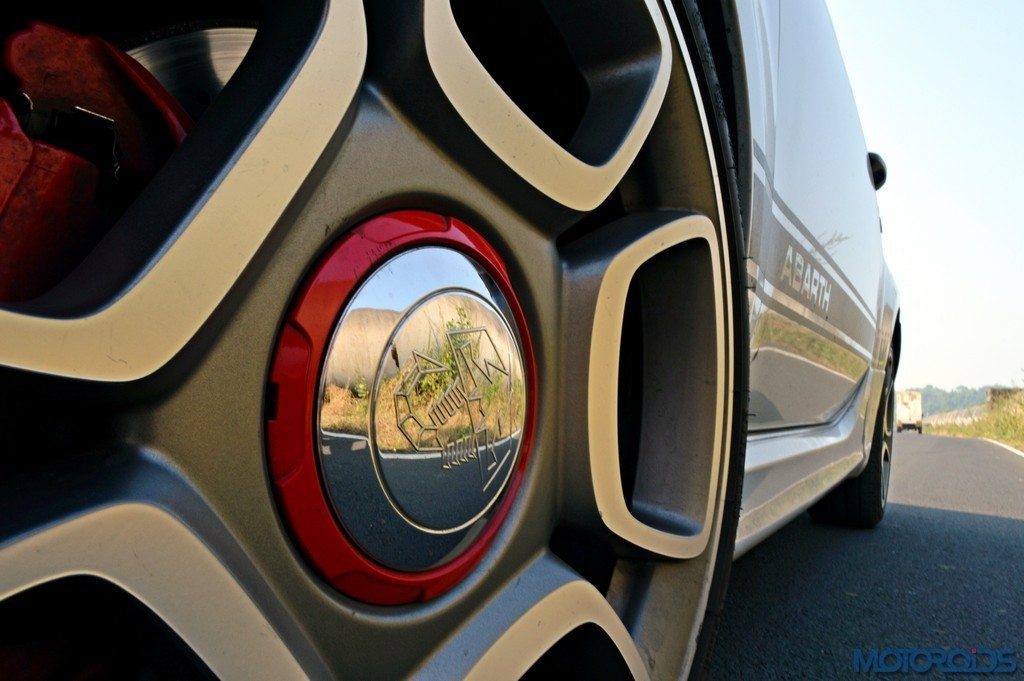 The 17-inch wheels deserve a special mention, as they look like shiny pieces of art rolling. The hubs are tasty quarter spheres of chrome etched with Abarth’s scorpion logo in the middle and bordered in red, while the spokes blend into each other to create some sort of a visual illusion that only an artist can achieve. The Abarth 595 comes with 205/40 R17 Pirelli P-Zero Nero tyres. 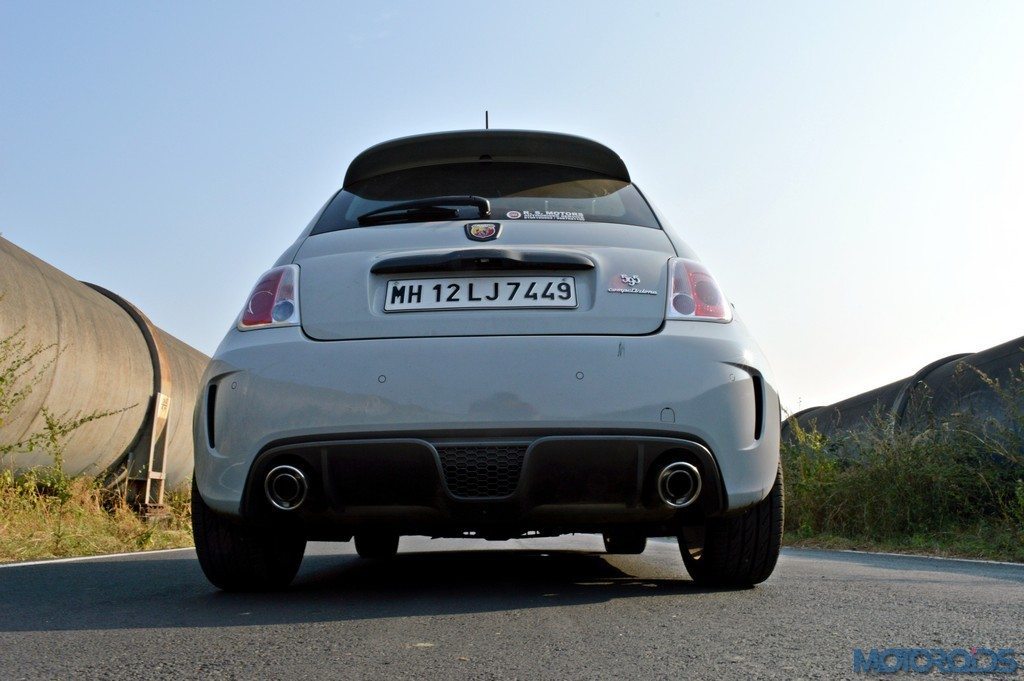 Just so you’re not reminded of Fiat, Abarth puts its logos all over the car. The pencil line moustache up front now grows around an Abarth logo, while the compact tail gate also brandishes the scorpion. The lower halves of the sides are embellished with subtle Abarth graphics that fit the bill perfectly. 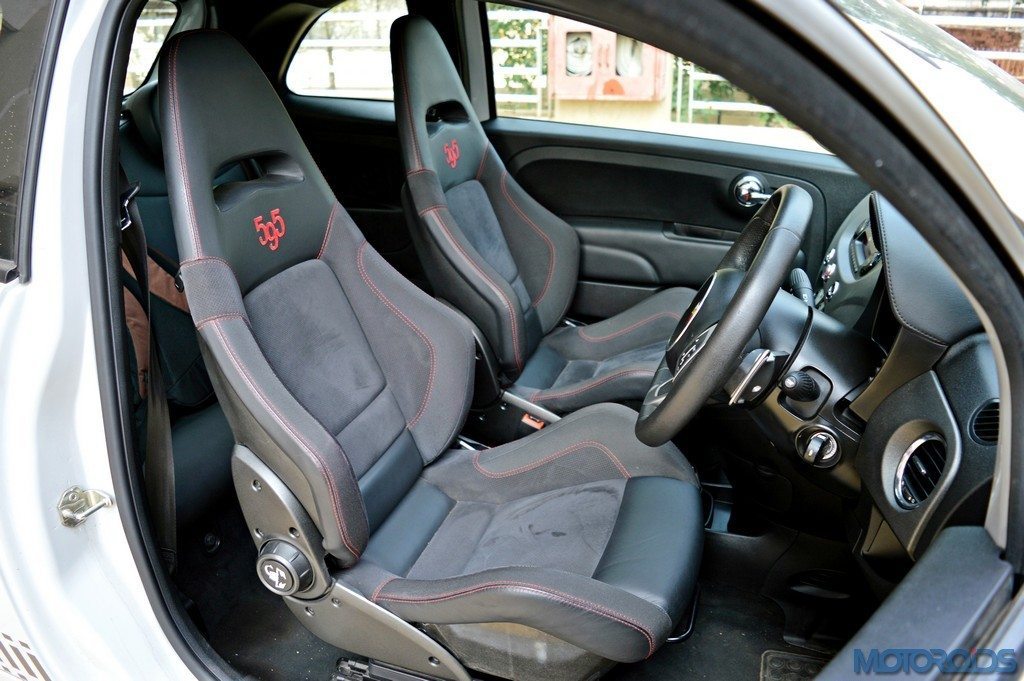 The wide doors open to reveal a couple of crazy things – the driver’s seat, and the passenger’s seat. Sourced from Sabelt, part of the Brembo group, whose brakes literally stop the world, the racing thrones are mega. There’s no electrical adjustability or height adjustment, and there’s next to no cushioning, but the support they offer is fantastic. The seats are deep, slim structured and heavily bolstered, so it doesn’t really accommodate horizontally challenged people too well.

Just like the exteriors look special, those seats look special too. The integrated headrests even have openings to slip on a racing harness, while the stitched 595 lettering is in liue with the contrast coloured stitching. Even the seat recliner knobs have Abarth’s scorpion etched on them. The rest of the interior’s story isn’t so special though. The dashboard is a sea of hard touch plastics and the center console is too busy. There isn’t even a touch screen equipped infotainment system, or navigation. But one does get a panoramic sunroof that not only adds contrast colour to the roof, but also makes the driving experience a bit more special. 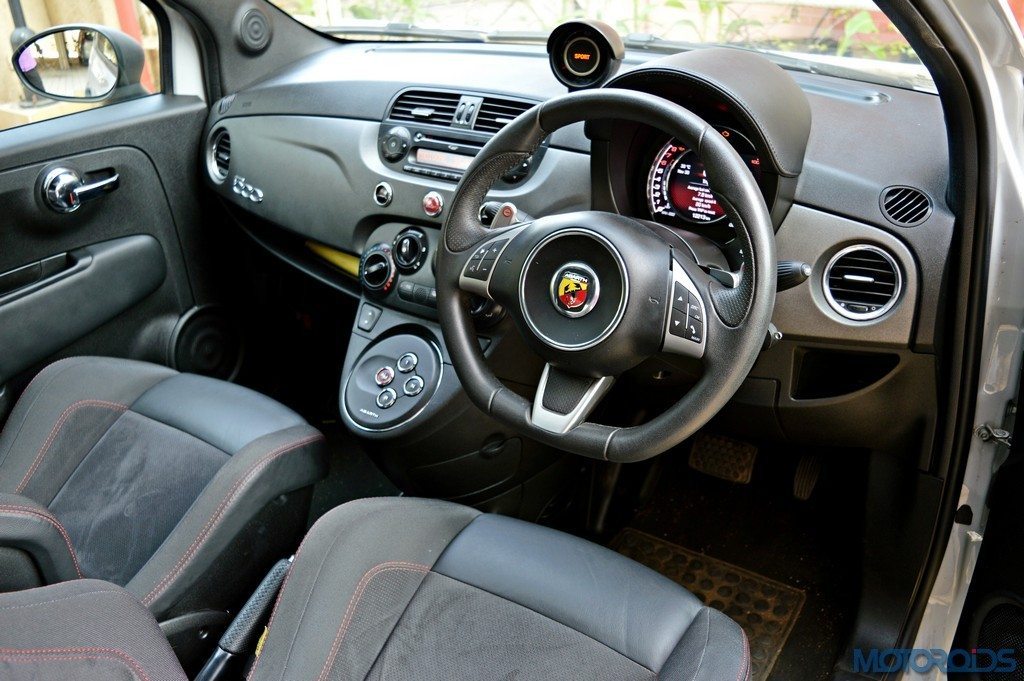 The fully digital instrument cluster is essentially a circular display area, with ripples of chrome to border out information. The mid-section of the display area reads out speed, date, time, outside temperature and other stuff.  A small pod that says ‘Sport’ comically sticks out from the top of the dashboard, and lights up when the go-faster mode is on. That pod also features a ‘turbo bar’, which reads out the levels of boost (in psi) the turbocharger is running at.

Entry to the rear seats (yes, there are a couple of them) is via pulling down the front seat backrests. While ingress is fairly simple, space at the back is cosy enough only if you’re into midget role playing. 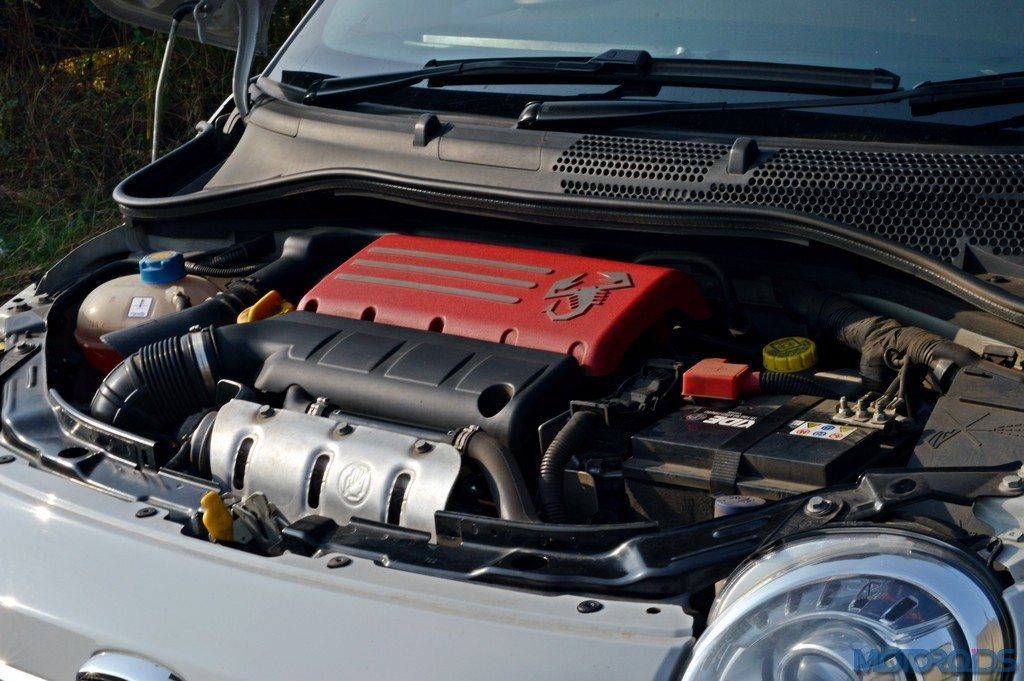 The front wheel driven Abarth 595 Competizione is powered by a turbocharged, T-JET, 4-cylinder in-line engine, displacing 1368 cc. Power is rated at 160 HP @ 5500 rpm, while maximum torque is rated at 230 Nm @ 3000 rpm (sport mode). Fiat claims a 0-100 km/h acceleration time of 7.4s and a top speed of 209 km/h. Then there’s something called TTC (Torque Transfer Control) that distributes drive torque to the front wheels of the car according to the drive conditions to optimize traction and control. 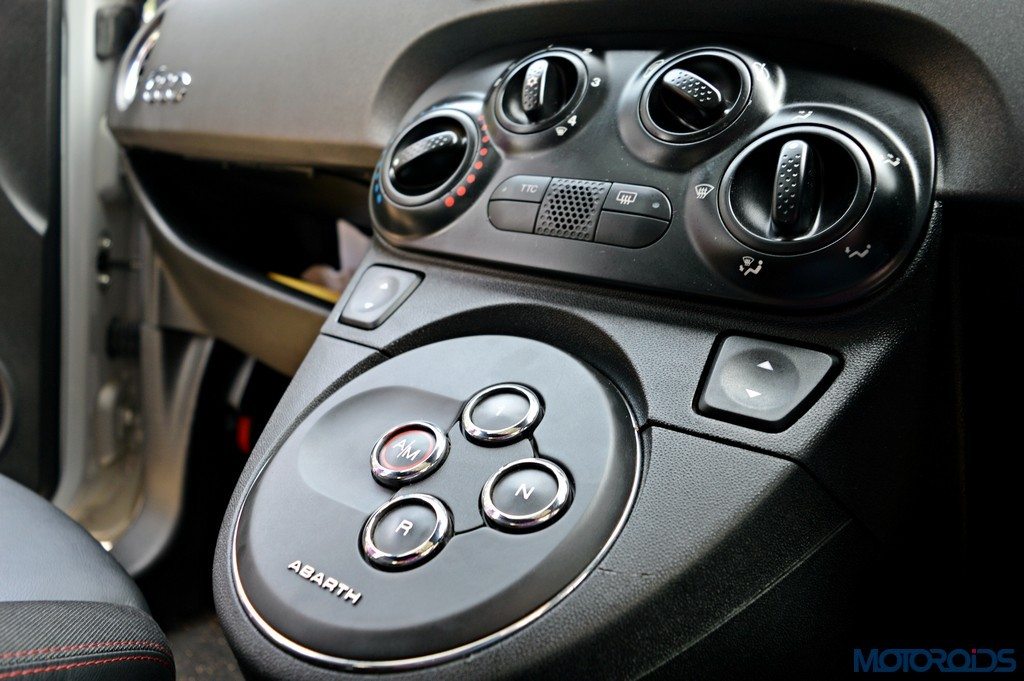 The little Abarth needs a twist of the key to get its feisty little heart to spurt into life. The twin exhaust tips at the back chime in with their presence with an idling note that’s on the subtle side of raucous. Cutesy this little Abarth may be, but the voice it emanates is decidedly throaty. We don’t get the manual transmission option in India, which is a bit of a shame, as stick shifters more often than not equate to a more involving driving experience. Instead, there’s a sequential automated gearbox with steering wheel shift paddles, which has left the lower half of the center console with a bunch of buttons. 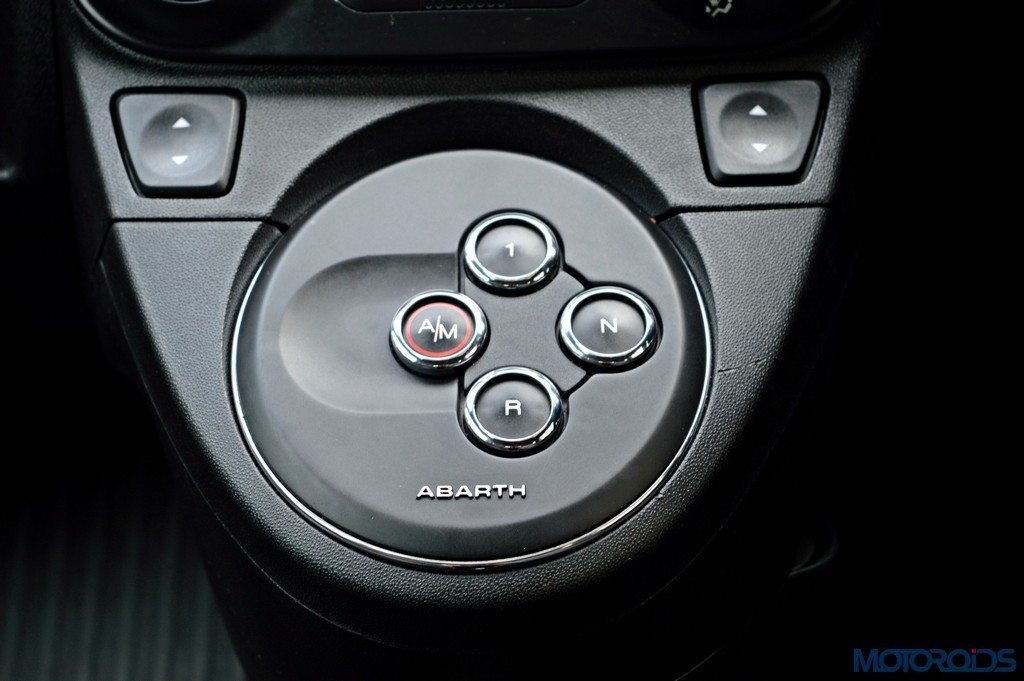 Unlike conventional auto shifters, the Competizione dos away with the ‘PRNDL’ control pattern and has a bunch of buttons controlling its direction. On pressing a button marked ‘1’, the 595 Competizione makes its move – it’s an equivalent of the traditional ‘D’. A heavy right foot sees one’s back get fairly intimate with those Sabelt seat backs, as peak torque surges in like the kick of a small mule. This enjoyable phenomenon occurs with a dab of torque steer in the whereabouts of 3,000 rpm or so, as the specification sheet promises. The twin exhaust pipes at the back respond with a snarl that signals the advent of a grin induced by all things fast . All’s well then, as the little Abarth charges forward with impeccable gusto. Until it’s time to shift gears. Momentum stops for a long while that almost becomes tangible in its presence, and one wonders if things have conked out. As the grin starts to fade out, the little Abarth shifts. 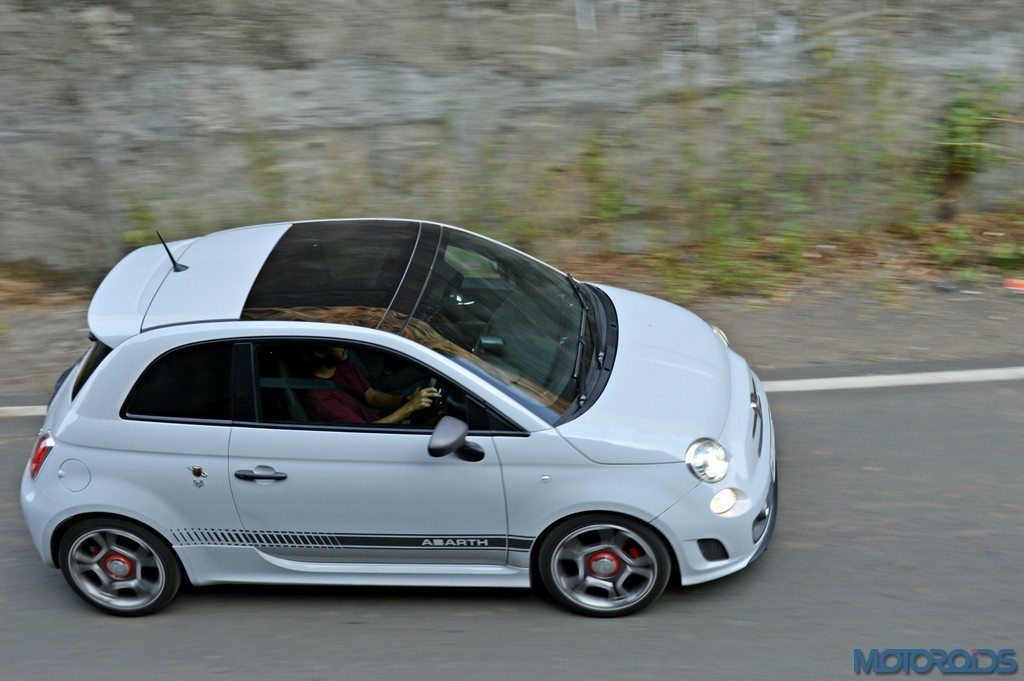 As you would have guessed by now, the automated manual transmission is painfully slow to respond, especially when you started off after reading your girlfriend texts that she’s home alone and horny. The silly, confused Auto mode is shooed off with a press of another button which reads “A/M”. Now you’re on your own – just you and the paddles. And that darned gearbox. In manual mode, the engine screams away till you actually intervene with your fingers.  As far as shift response goes, things hardly improve. With a flick of the paddle, one has to wait for an eternity for Carlo Abarth to personally descend from heaven and shift gears. In a performance car, this kind of a shift response is a buzz kill, as future moves are made difficult. 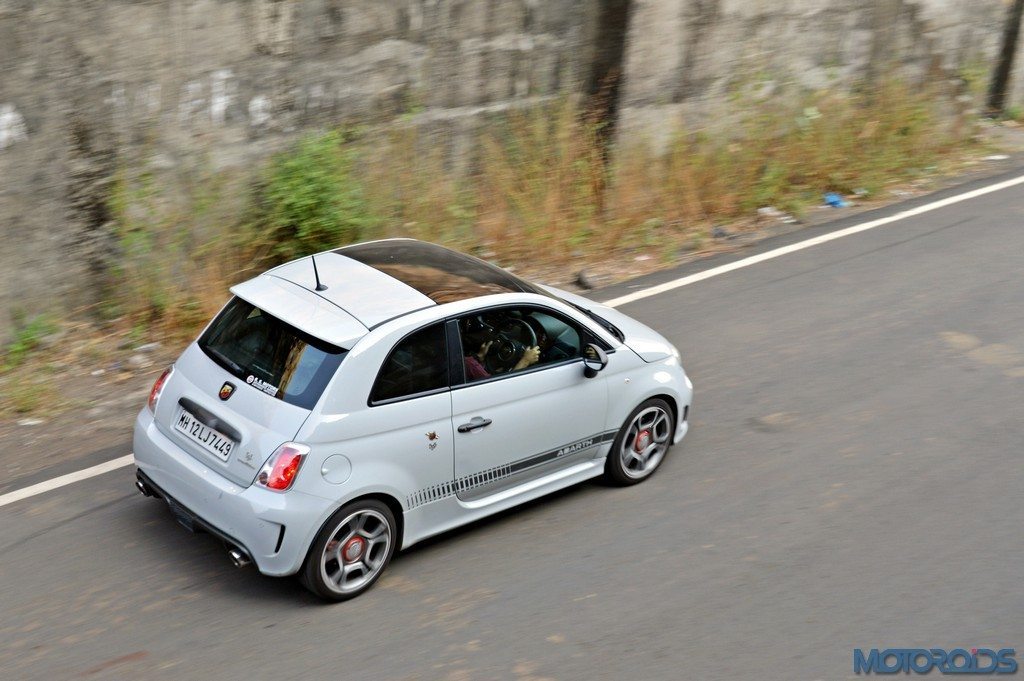 Once you’re used to the transmission, however, the little Abarth is a very enjoyable car, especially when another button marked ‘Sport’ is pressed. Hardware requisite for speedy performance are called into service, which means that TTC (Torque Transfer Control) sign lights up, throttle inputs are dealt with more alacrity, the steering response becomes more attentive and the exhaust notes become raspier.  Oh, and the instrument console also lights up in shades of red, and the little pod’s SPORT lettering lights up. That pod actually shows how much boost the turbocharger is running at. 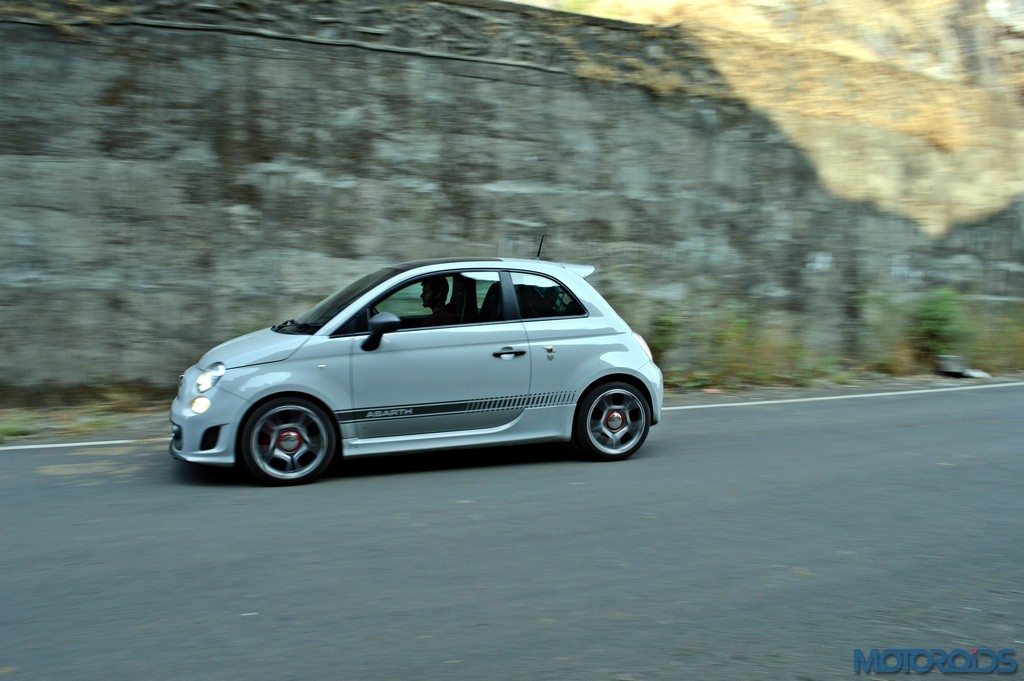 In Sport mode, the little Abarth is gracefully quick, and tons of fun to rip, especially on narrower stretches of tarmac or lanes. Its diminutive size means that it can be pointed and shot at most gaps in traffic. One can imagine it being hustled through cobblestoned Italian streets and by lanes, drawing inquisitive glances and fending clothes strewn out to dry in the backyards. Even with the Sport mode in sleep, the hot hatchback is enjoyably responsive to all the inputs. 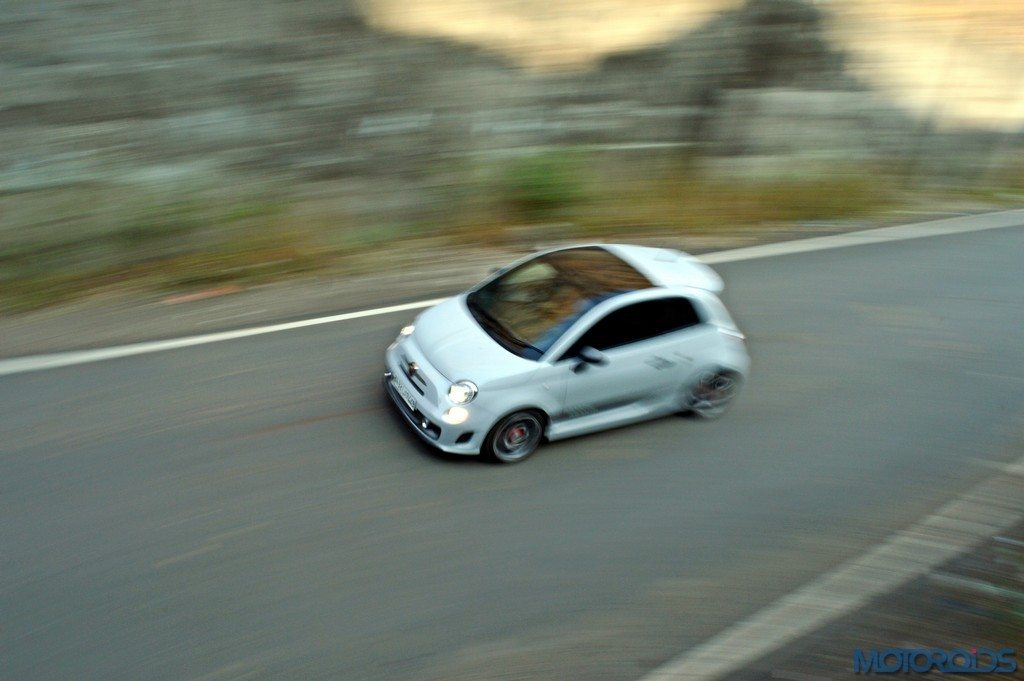 The cobblestones would hit pretty hard though, as the Abarth 595 Competizione doesn’t really transfer road topology information inside with a particularly soft hand. Ride quality is extremely stiff, especially to Indian bottoms, which are more suited to cushy, magic carpet rides even in hatchbacks. The little Abarth viciously crashes through potholes and over expansion joints, with the hard-edged Copaf front and Koni rear suspensions; both with FSD (Frequency Selective Damping) technology, delivering every inch of the road right up your spine. However, the ground clearance and damping are fantastic, and the car never scraped its belly or bottomed out even once, even with four adults on board, over Mumbai’s scariest speed breakers. 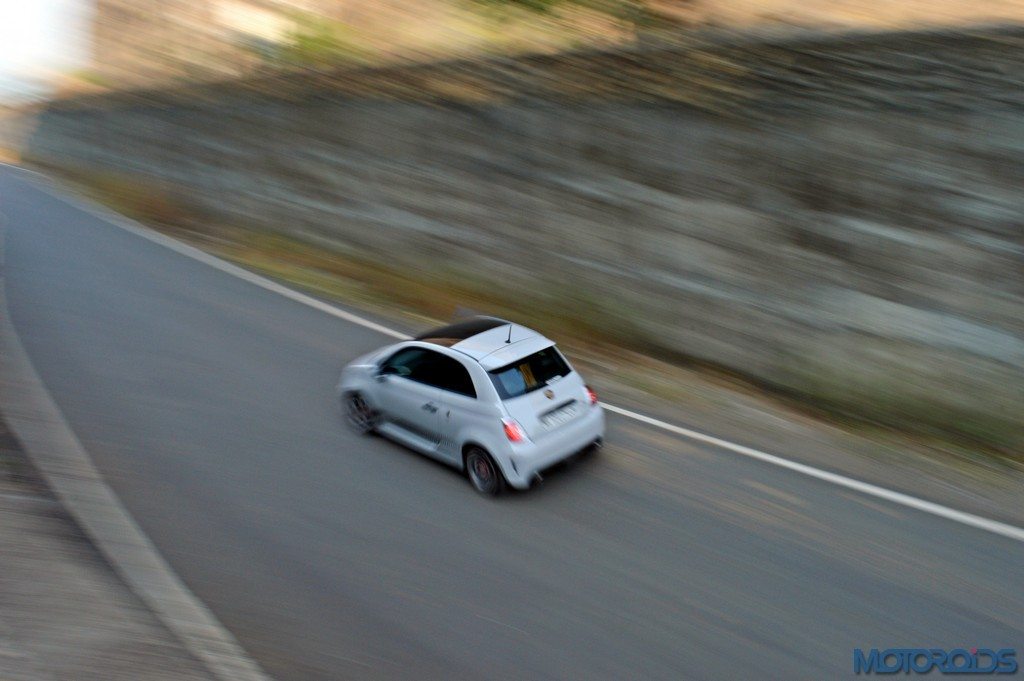 What that stiff ride does is bring in sublime handling characteristics to the table. Steering feedback is commendable, though leaves some more to be desired, considering it’s the hottest of the hatches. Grip is fantastic, and the little Abarth changes directions at mediocre speeds with the agility of a leopard. Aid, in a big way comes from the sports tuned suspension setup, the small wheelbase and the sticky 205 section Pirelli rubber. In everyday driving, there’s nothing this side of a Mini Cooper S that comes even close to the levels of grip or agility that the Abarth 595 Competizione delivers. 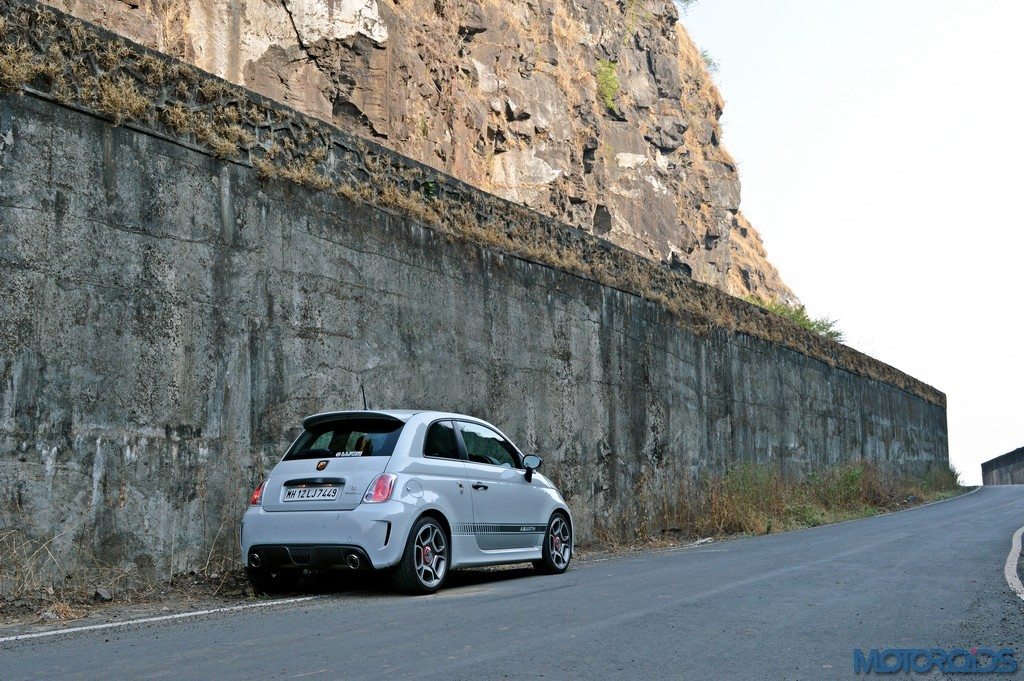 The brakes are amazing too. The little Abarth stops on a dime, courtesy the self-ventilated, oversized 305×28 mm perforated front brake disks and the self-ventilated 194 x 11 mm perforated rear discs, all four clenched tight by four-piston aluminium fixed brake calipers. In fact, the potent stopping power needs some time to get used to, as you tend to stop well in advance. 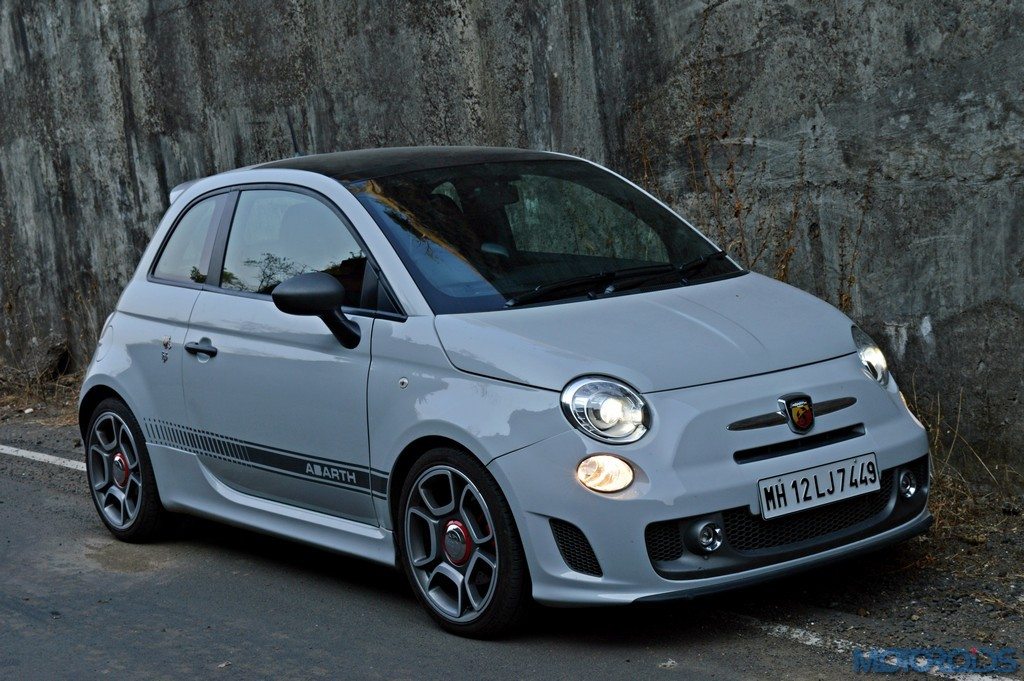 The Abarth 595 Competizione is a very special car. It’s reasonably quick, intensely agile and does look like a million bucks. It sounds the part too. We have excused the ordinary interiors, but we simply cannot come to terms with lag ridden automated manual transmission.  A car like this deserves a proper manual shifter to row, or a properly modern, quick shifting auto. As mentioned before, it’s a bit of a shame, and lets the rest of the setup down. Then there’s the price – at INR 29,85,000 (ex-showroom New Delhi), the Abarth 595 does sound quite steep. Personally, I prefer the Abarth’s style over the Mini’s, and I like the fact that the 595 will be the more unique car to roll in of the two. But I still can’t forgive that transmission. If you have the money and love it, just buy it, or gift one to your girl – her friends’ jealousy would know no bounds.