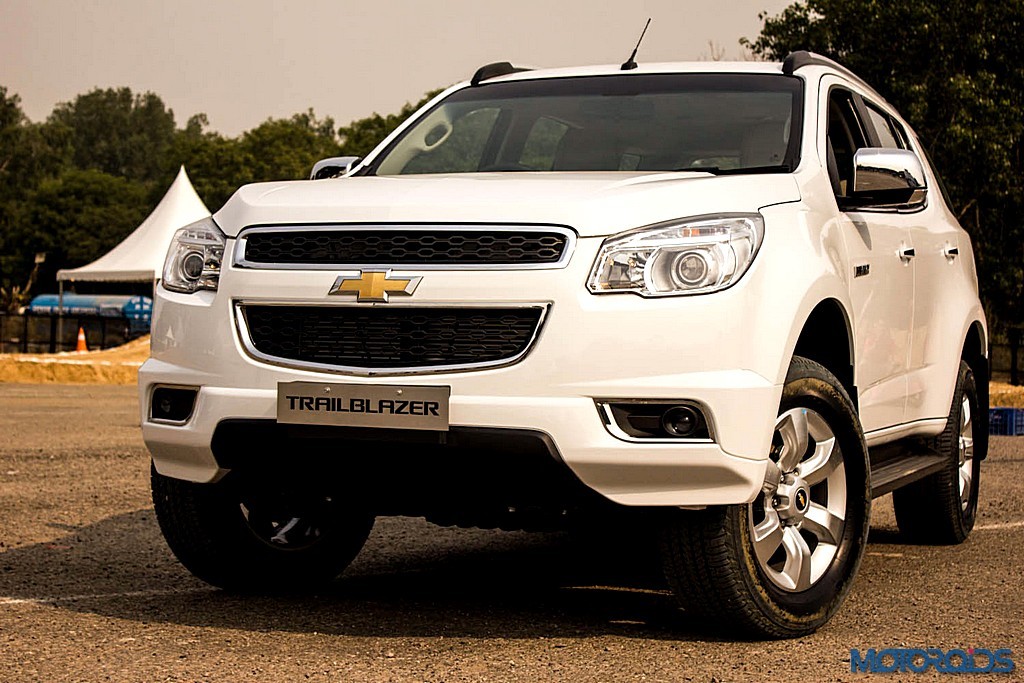 Chevrolet hasn’t been ENJOYing smooth SAILing in the Indian waters. Puns intended. After a few lacklustre launches which proved to be duds at the box-office, it has decided to bring in the Trailblazer SUV here in India. Available in only one LTZ AT trim, and one diesel engine exclusively strapped to an automatic transmission,  the full-sized, premium SUV will be a CBU from Thailand, which makes the ex- showroom price of INR 26.4 lacs rather competitive. We put the large Chevy to its paces over a brief period of time, and find out how it stacks up.

From the outside the first thing you notice about the Trailblazer is that, well, you notice it! It’s a huge piece of machinery which sizes up almost as big as two small hatchbacks. Coupled with a ground clearance of 253mm the Trailblazer is a dominant figure from all angles and you can be sure that on the road, everyone will be looking up to you from their puny hatchbacks and sedans.

The swept back projector headlamps along, chunky 17-inch wheels, and the LED taillights succeed in making this behemoth look much less boxy than it actually is. The bulge on the hood, along with black roof rails, and black scuff plates on the bumpers give it a really aggressive look. Full points to Chevy for giving this beast Toyota Fortuner levels of commanding road presence. However, since it’ll be catering to Indian tastes, a few more lashings of chrome on the outside would have worked wonders. Here’s a small gallery of the car detailing its exterior highlights

You end up climbing inside the car rather than stepping in it. The sidestep does help in easy access but it might be difficult for the elderly. Once inside it’s a really nice place to be in with full leather seats cosseting your back and a welcoming beige-black interior with classy piano black inserts. The driver’s seat offers electrical adjustment so you can find your comfortable position pretty quickly.

You really do feel like the King of the road once you look at the authoritative view outside the windscreen. Everything on the road is below you, except, of course, the trucks and buses. The steering wheel, though lacking contours, feels nice to hold and has good grip. 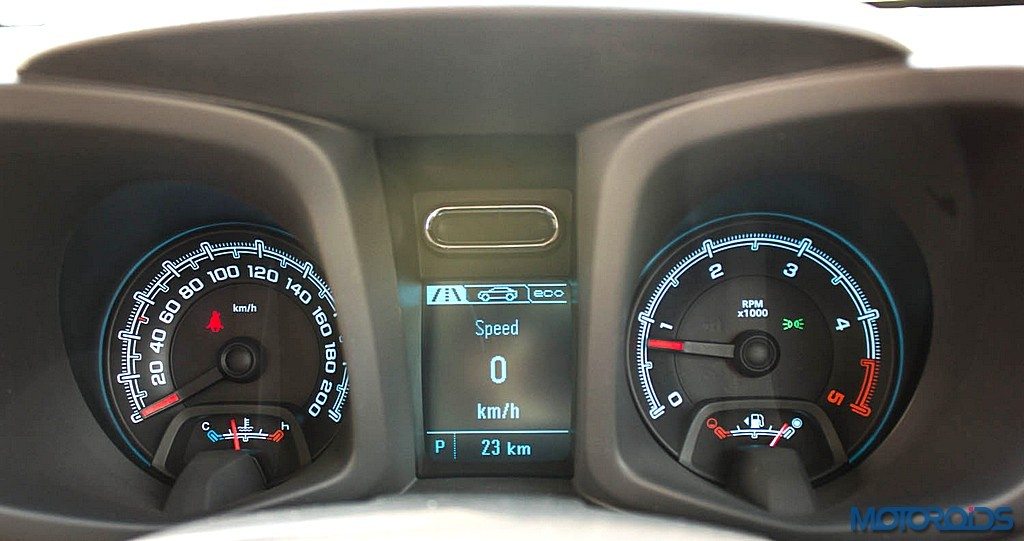 The Camaro inspired instrument cluster deserves a special mention, with the ice blue illumination coupled with the sharp fonts make it really pleasing to the eyes. The needles do the customary full sweep once you start the car. In between the two dials lies the MID (Multi Information Display), which displays litres used, expected range, digital speedometer, a trip meter with average FE along with speed and even a timer. 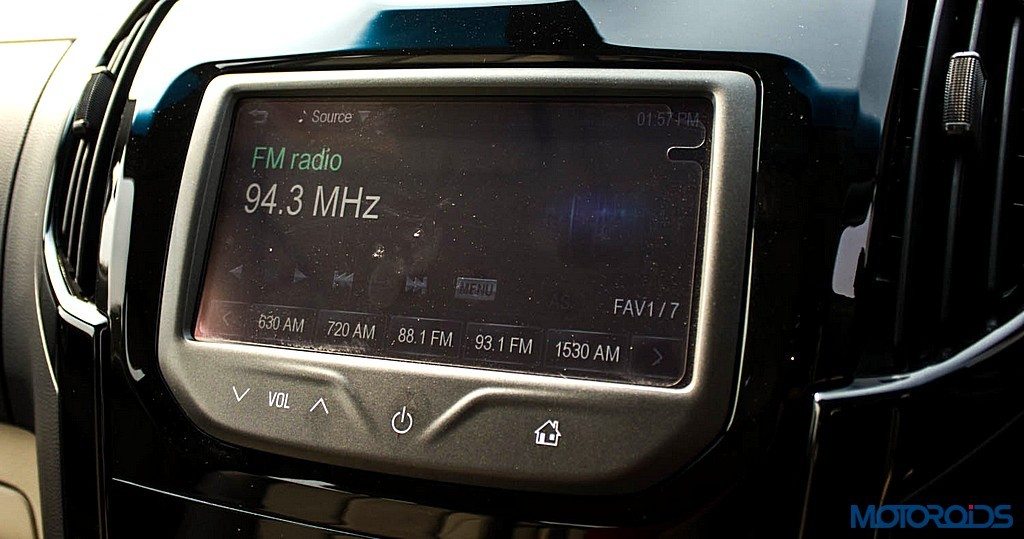 One gets Chevy’s touch-screen equipped MyLink infotainment system on the centre console, which allows smart-phone connectivity. Though touch sensitivity is nice, there is slight lag in the way it performs, right from scrolling, to pressing any button. But there is a much bigger problem than that here. There is no navigation, which is a glaring omission –  especially at a time when manufacturers use navigation as one of the cornerstones of their advertisement! (Remember the Renault Kwid? And remember its price?). 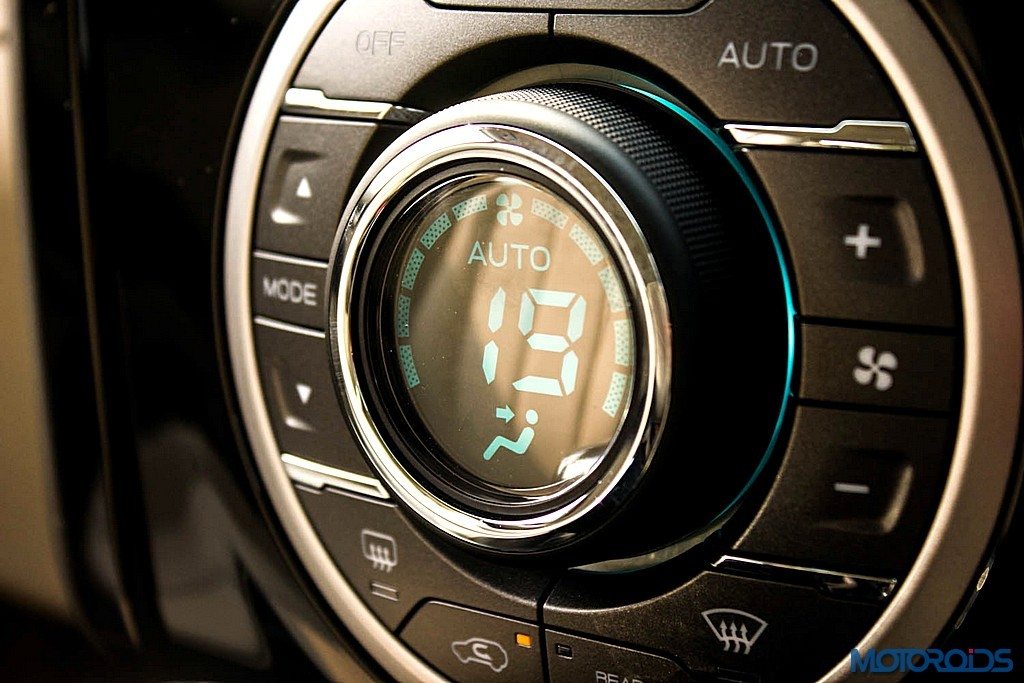 The automatic climate control has a nice chunky central dial with chrome surround, which feels really premium. With just a few twists the desired temperature can be set and the car will do the rest. The piano black finish along with chrome bits thrown here and there give a premium look to the interiors, but these surfaces will show every little speck of dust and will require frequent cleaning to look neat. 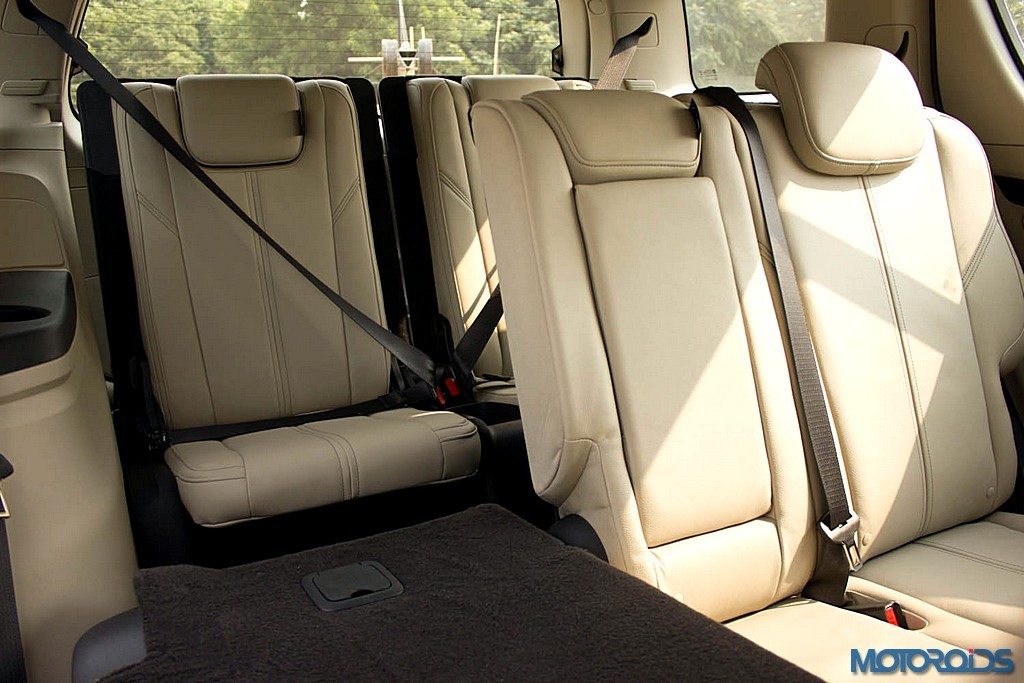 The second row seats are again really comfortable just like the front row, and have ample legroom. Three people can comfortably sit abreast. Look above and there’s a dial to control the air-conditioning in the second row along with two AC vents which can also be independently closed. The third row is fairly comfortable, but adults, especially large ones, can’t sit though a long journey. 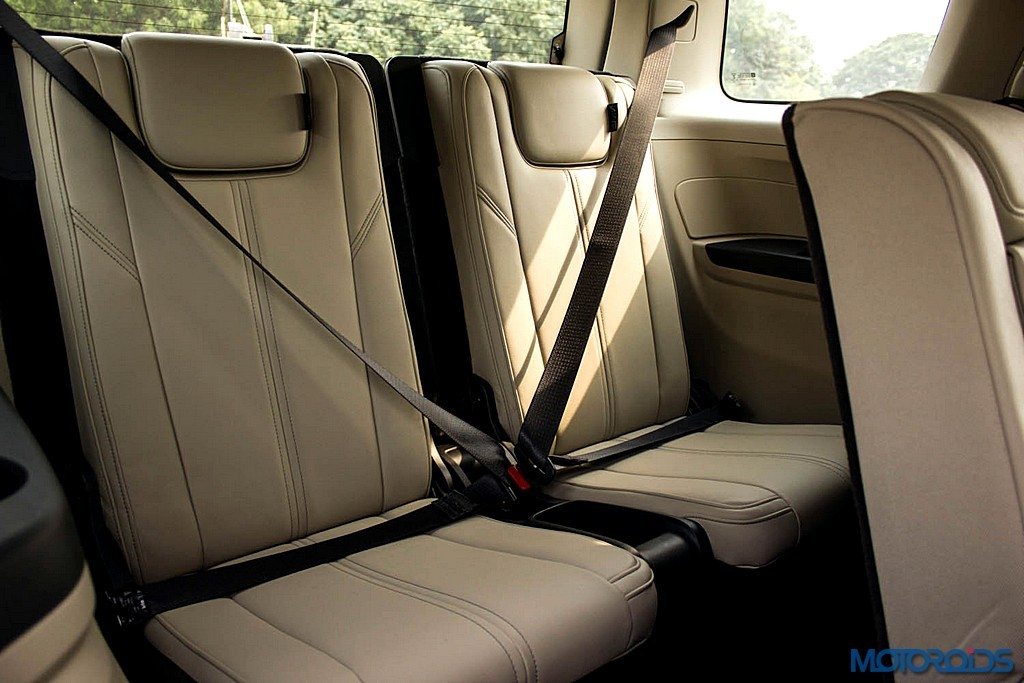 On the plus side one gets a proper headrest and retractable seatbelts even in the third row. With all the seats up, there is enough space in the boot for a couple of bags. But with 60:40 middle row split and a 50:50 last row split you get a lot of flexibility regarding space which ups the practicality quotient. With all the seats flat down, one can easily move an Indian wedding in it. Check out the details of the car’s interior in this mini image gallery 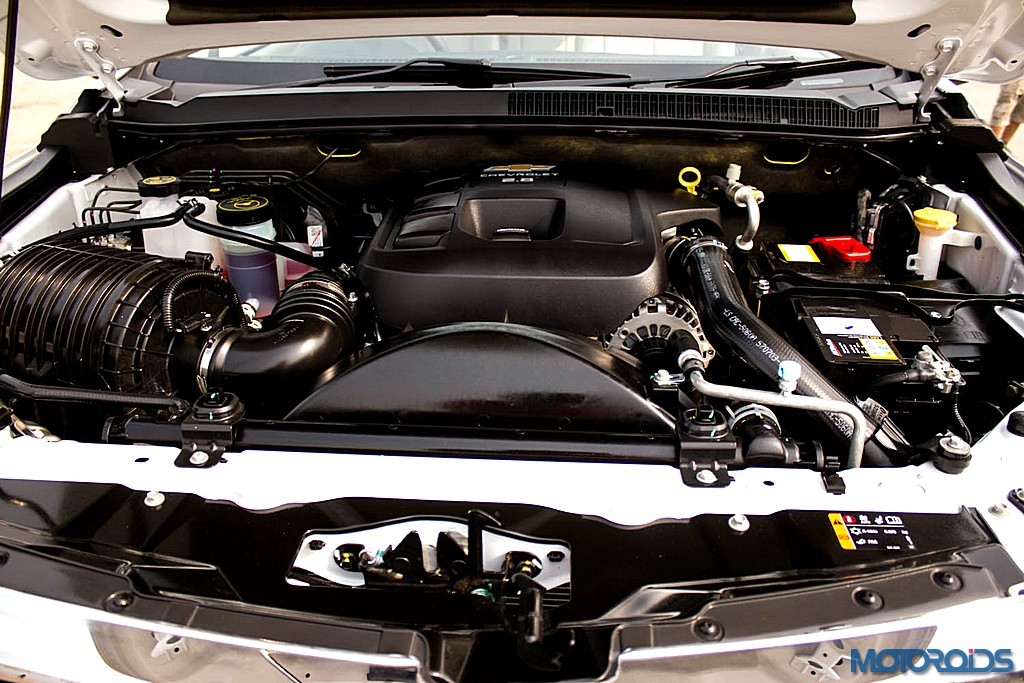 The engine is a 2.8L Duramax diesel made out of cast iron and gives the rear wheels class leading power of 200PS@3600rpm and an equally impressive torque of 500nm@2000rpm. Coupled with a six speed AT gearbox, the car is an absolute breeze to drive. But with a large engine and an AT box, fuel efficiency has taken a hit. ARAI says it’s 11.45kmpl, so in the real world you can expect somewhere around 7-8 km/l. 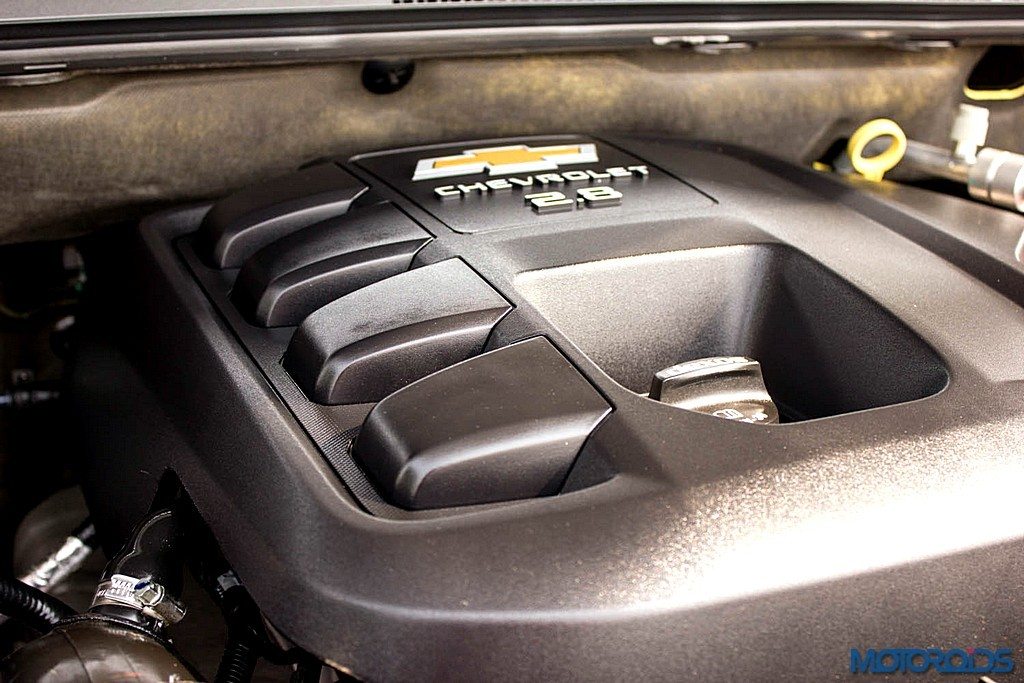 Start the engine and that is the time you are clearly reminded that it is a diesel engine. The whole car shakes us as the cylinder set into motion, but settles down as the engine gets to idling speed with the sound turning into a distant rumble soon after. At crawling to cruising speeds, the sound from the engine bay is relatively muted thanks for the heavy NVH deadening. The base of the hood has been covered with thick insulation which keeps the noise subdued. 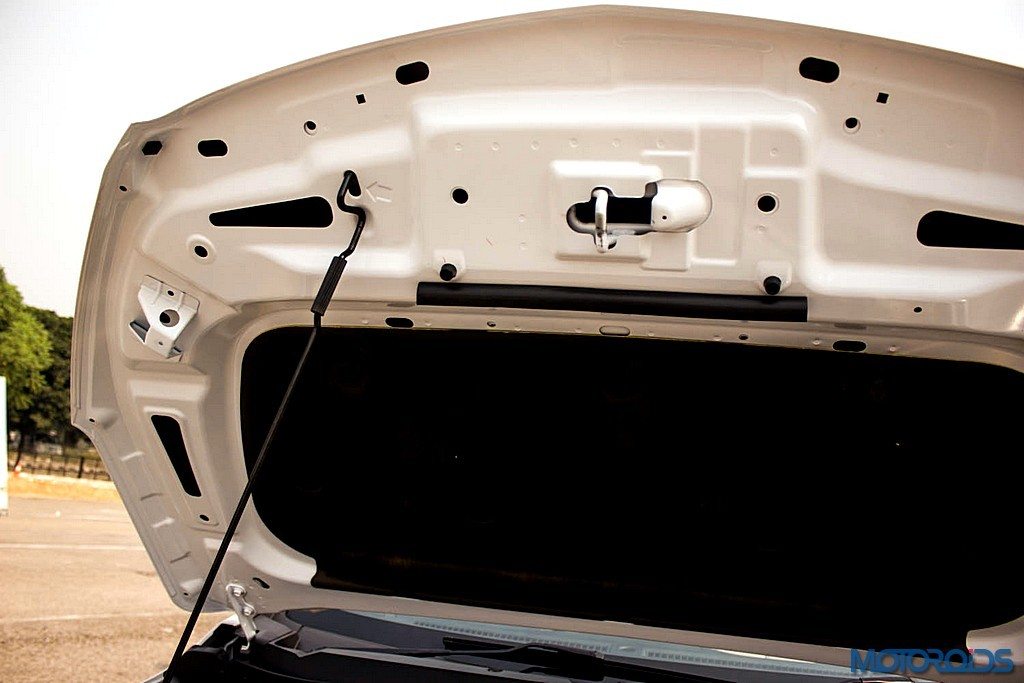 Speaking of the hood though, it comes with a free gym membership! How? Well there are no pneumatic struts, so one has to muscle the hood up and trust us, it weighs a lot. The engine bay is neatly packed though with a plastic shroud covering the top of the engine.

When it comes to on-road performance, the Trailblazer moves with serious thrust, even with its 2,068 Kg weight. Acceleration is impressive , and the class leading power and torque figures of that big Duramax motor start to makes sense. Fortuners, Endeavours and Captivas are soon specks in the big, chrome capped ORVMs, as the Trailblazer sprints to 100 km/h from a standstill in just 9.89 seconds, making it the king of the premium SUV drag strip. 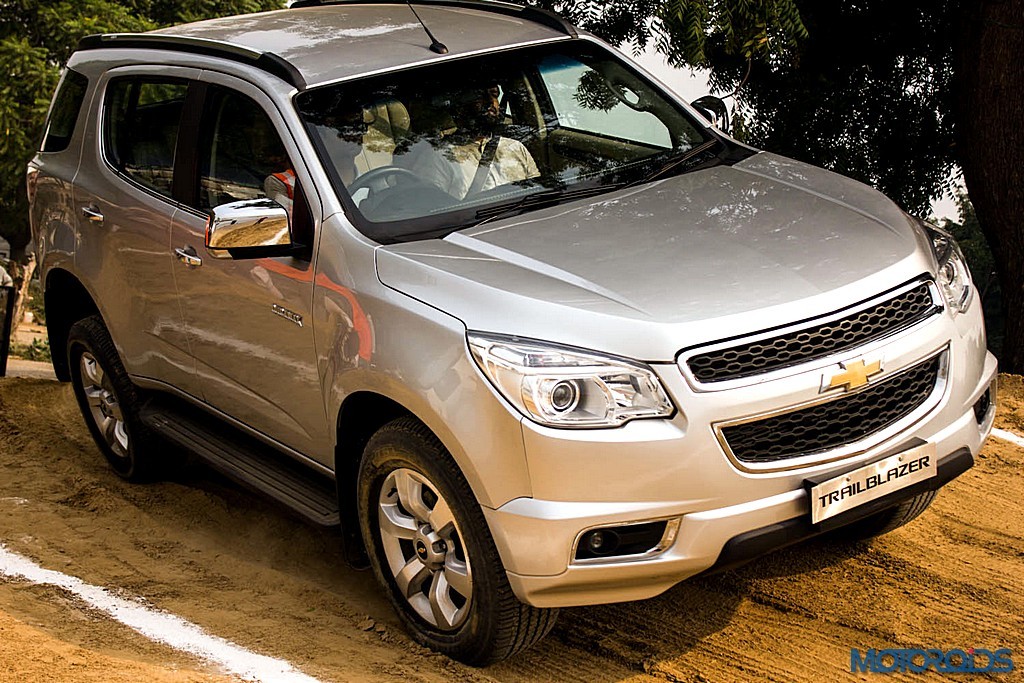 Power delivery is a well-balanced mix between linearity and outright punch, while the mild turbo lag is forgiven, given the excellent mid-range performance. Coupled with the six-speed torque converter automatic transmission, which harnesses all of the engine’s muscle, the Trailblazer is a potent tool for the highway. The transmission also offers a manual mode via the gear lever, which never up shifts unless commanded to, and lets one rev the engine all the way to the 4,800 rpm. In automatic mode, up-shifts happen at 3,800rpm when given full beans.

That said, the big Chevy can get a little noisy when pushed hard, and it’s better to up shift sooner than closing in on the red-line, because top-end performance is a bit weak. Driving with a light foot sees the transmission keep the revs low and shift early, and our brief drive didn’t throw up any perplexing moments for what can be termed as a pretty smart transmission.

The ride quality is acceptable and fairly comfortable, but things inside get a little too jiggly when the road surface disappears, putting forth its truck like, old-school construction.  Regarding the size, things are perfectly fine as long as the roads are wide, but when ventured into a small alleyway, one immediately realizes the behemoth like proportions. Driving in the city becomes a bit of a task, as the short turning circle and the vehicle’s girth act against it. The drive-train is perfectly at home though, when negotiating bumper to bumper traffic, as all the torque comes in at 2,000 rpm. Reversing is also not that bad as you do get a reversing camera.

Visibility through the rear windscreen is pathetic if all the headrests are kept up; you’re at the mercy of the reversing camera. With all round disc brakes and ABS+EBD the Trailblazer stops really well and in a straight line. But there is a lot of body roll and it tends to lurch forward if you brake hard. Speaking of the body roll, this is no corner carver, and is as huge as an elephant. The result of both these things is that taking corners in this SUV isn’t quite as confidence inspiring as one may desire. One has to pre-decide the path and then proceed. Don’t expect physics defying athleticism here, though the dynamics for the class are  safe and predictable. 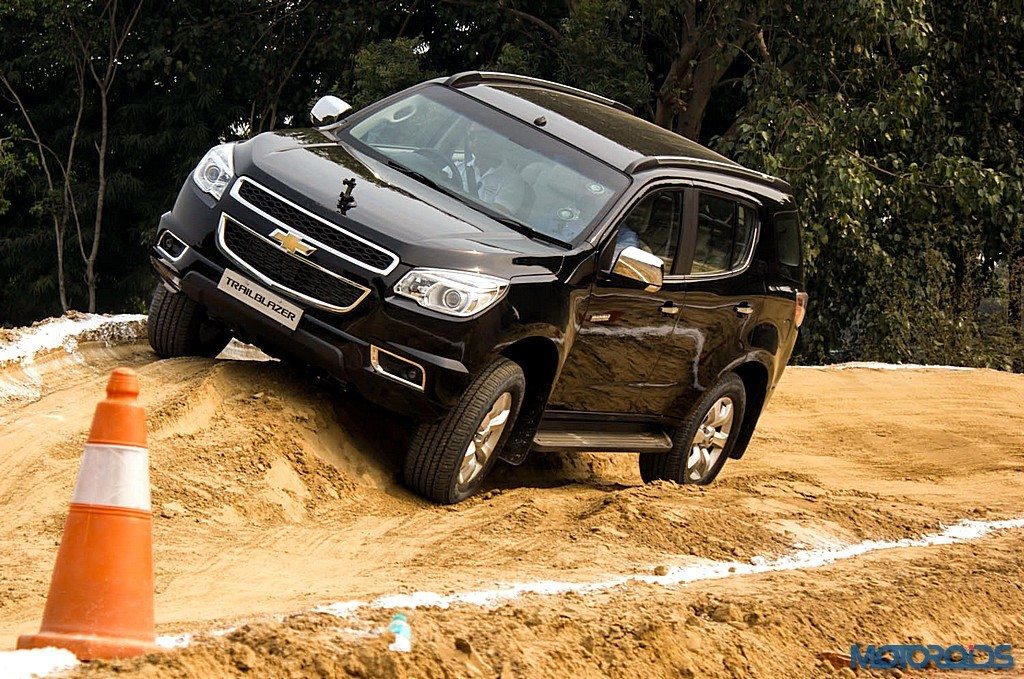 Even before we talk about how this car behaves off-road, one major thing which goes against this is that there is no 4×4 available for the Indian version! The power is sent only to the rear wheels. However Chevy had built a closed pseudo off-roading track to showcase how the truck behaves in these conditions. For all the inclines that you might encounter, the Hill Start Assist (HAS) along with Hill Descent Control (HDC) are really useful.

The HAS helps tackle steep incline with ease, preventing the car from rolling back or the engine from stalling. On steep inclines, press on the brake, and once the foot is off the brake, the truck will stay there stationary for 3 seconds giving one ample of time to press the accelerator and move on. Similarly while going down on an incline if one leaves both the pedals alone, this Chevy will brake itself and not exceed 5kmph. But the best bit of kit on the machine is the Traction Control System (TCS). 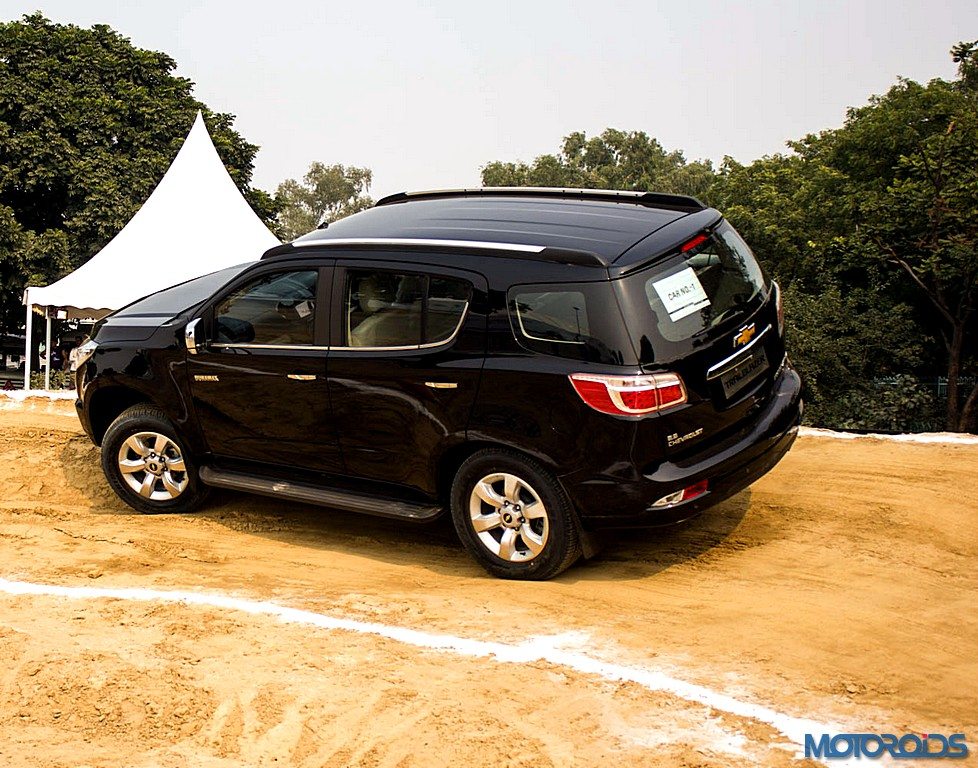 To give you an example of how it may thwart a pseudo 4×4 we’ll set this hypothetical situation. Suppose one manages to drive the Trailblazer on a sandy track and stops the vehicle. lets also assume that the driver doesn’t have a proper understanding of how to drive a vehicle in such a scenario. A novice will step on gas, which will make the wheels spin, kick dirt, dig themselves a ditch and before you know it you would find the vehicle beached.

Not with the Trailblazer, though. In a similar situation, even if you put the pedal to the metal, the wheels of the car slip only for an instant before the TCS acts and brakes the wheels individually and in repetition, trying its bit to not let the wheels spin, gather traction and get you rolling again. Will it be able to do match a proper 4×4? No it won’t. But with its ground clearance and Traction Control, it should be able to  make it through moderately challenging off-road without trails without breaking a sweat.

So is the new Chevy SUV any good? It surely impresses on many counts. The Chevy’s enthusiastic engine, nicely appointed interiors, decent off-road performance, handsome looks and sheer size do make a point, and a rather big one. For now, in the face of its current competition, we think it holds its own quite strongly, given its aggressive pricing. Though GM India has kept things pretty simple with one engine, one transmission and one trim, a little variety, and more importantly, the inclusion of a 4×4 option should certainly help the large American’s cause in the sensitive Indian market.

But is it enough to topple its rivals, who will be coming back at it with thorough updates next year and the year after that? We’ll have to wait and watch. Stay tuned for a more detailed review soon! The Chevrolet Trailblazer (2WD AT only) is priced at Rs 26.4 lakh (ex-showroom, Delhi). Its direct rivals, the Toyota Fortuner 3.0 2WD AT and the Mitsubishi Pajero Sport 2WD AT are priced at INR 25.17 lakh and INR 25.35 lakh respectively. 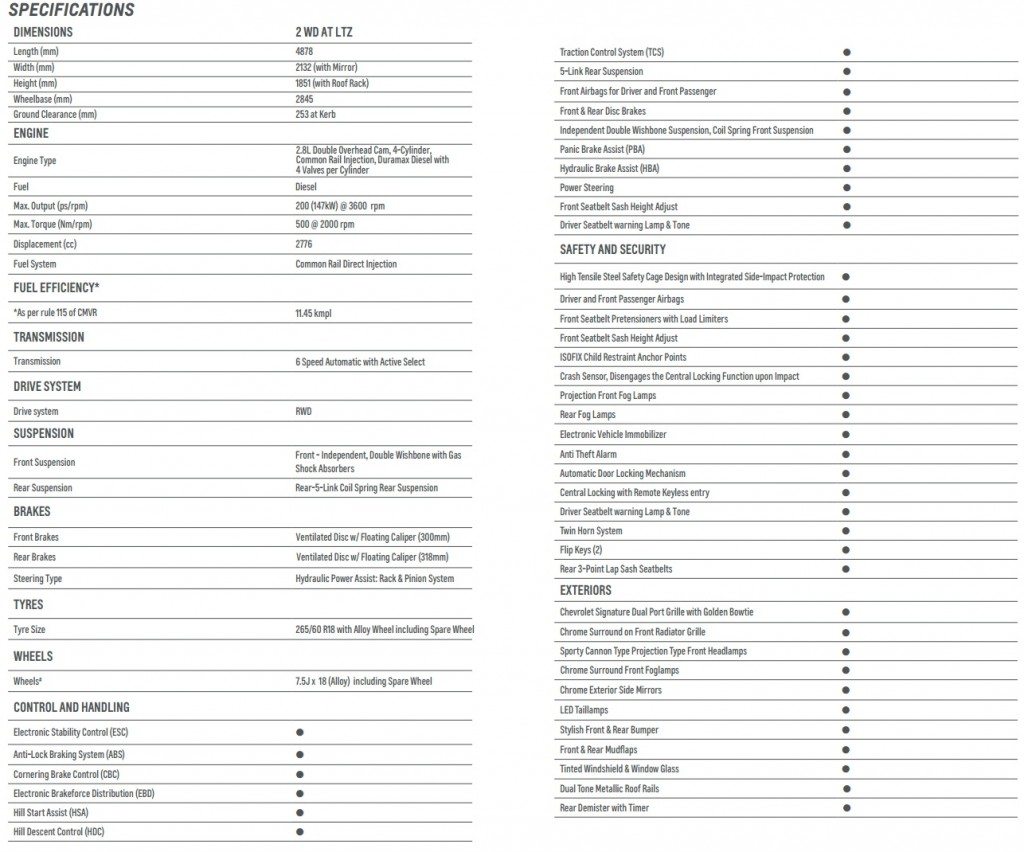 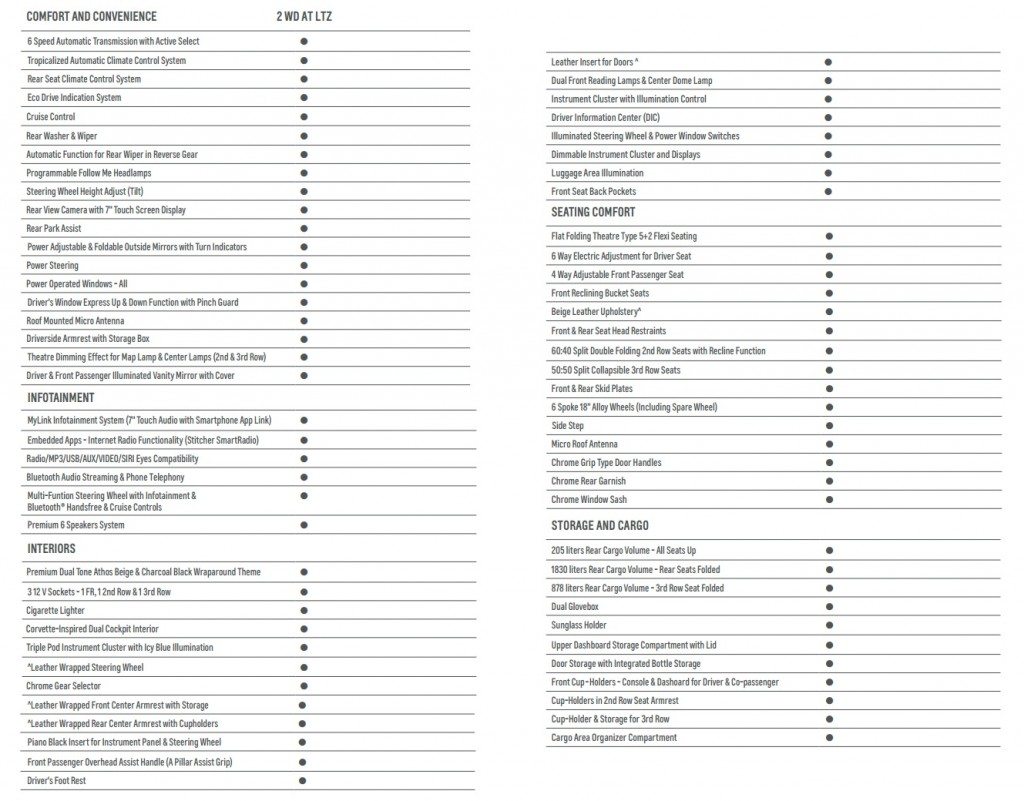