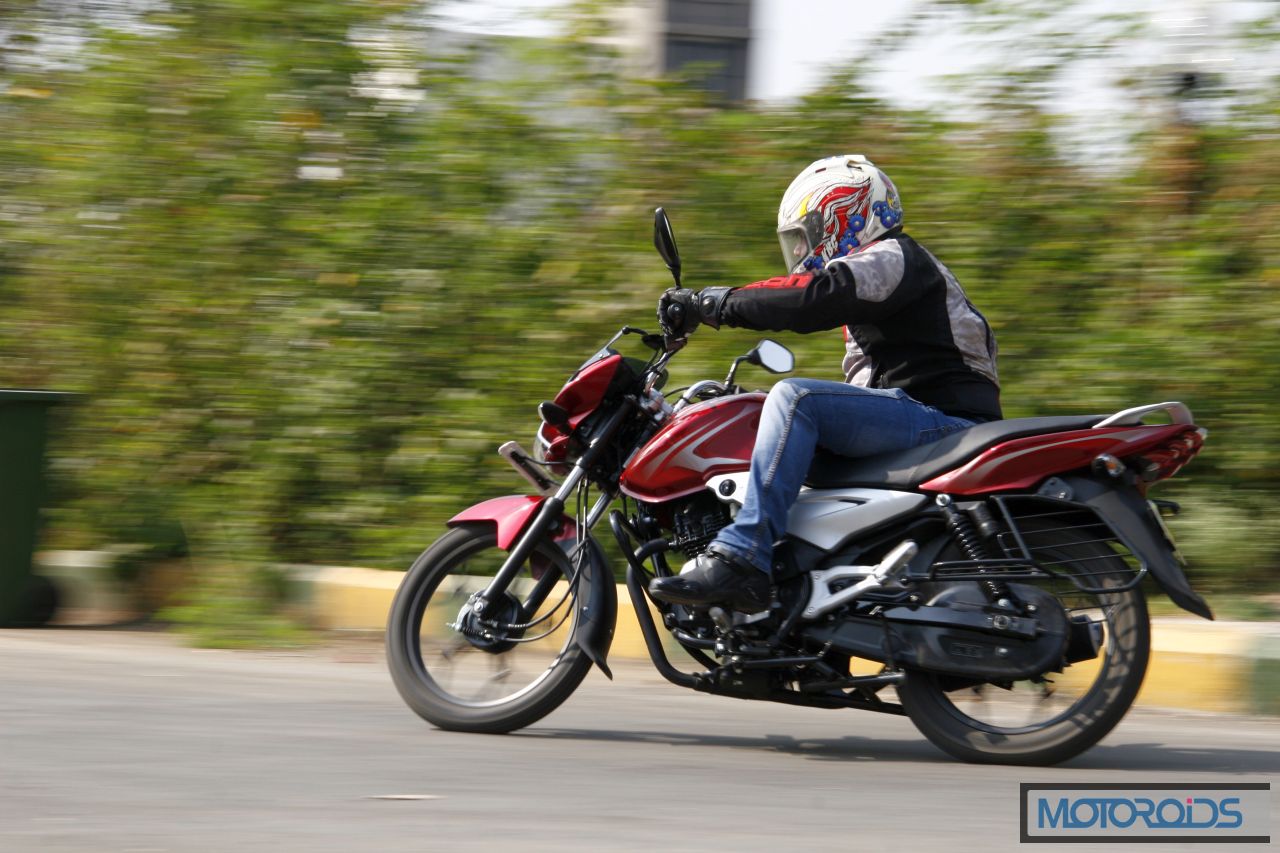 We were invited by Bajaj for the new Discover 100T review in Pune. Featuring the world’s first ever 4 valve 100cc engine on a motorcycle, the 100T aims at raising the bar in the 100cc segment. With 10.2 PS of peak power, and a platform shared with the bigger Discover 125T, this new 100cc machine from Bajaj aspires to scoop out the creamy layer in the entry level motorcycle segment in India. Here’s a detailed review of this interesting new product.

Another 100cc bike? Is there any space for it in a market cluttered with a thousand options? 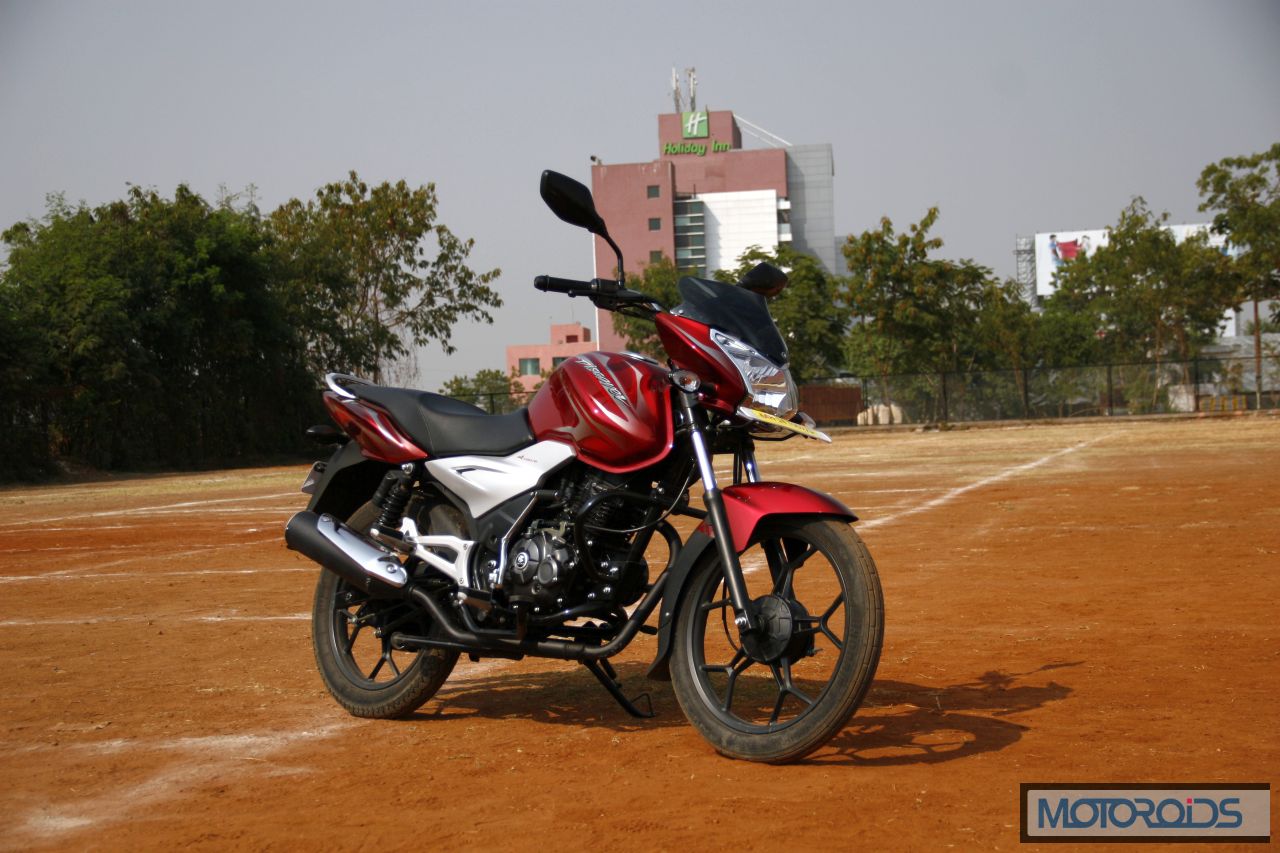 When the market is so huge, even a small share means a lot, and that’s why you see every bike maker taking its chance with the segment. Bajaj are well entrenched in this segment now with the success of the Discover 100, but they want to take another slice out of Hero’s big chunk. The marketing brains at Bajaj have divided the 100cc segment into three sub-segments, with the Platina sitting at the bottom and the Discover 100 catering to the middle sub-segment. The Discover 100T, in their opinion will slice out a sizeable piece from the upper layer of the all-important 100cc segment. 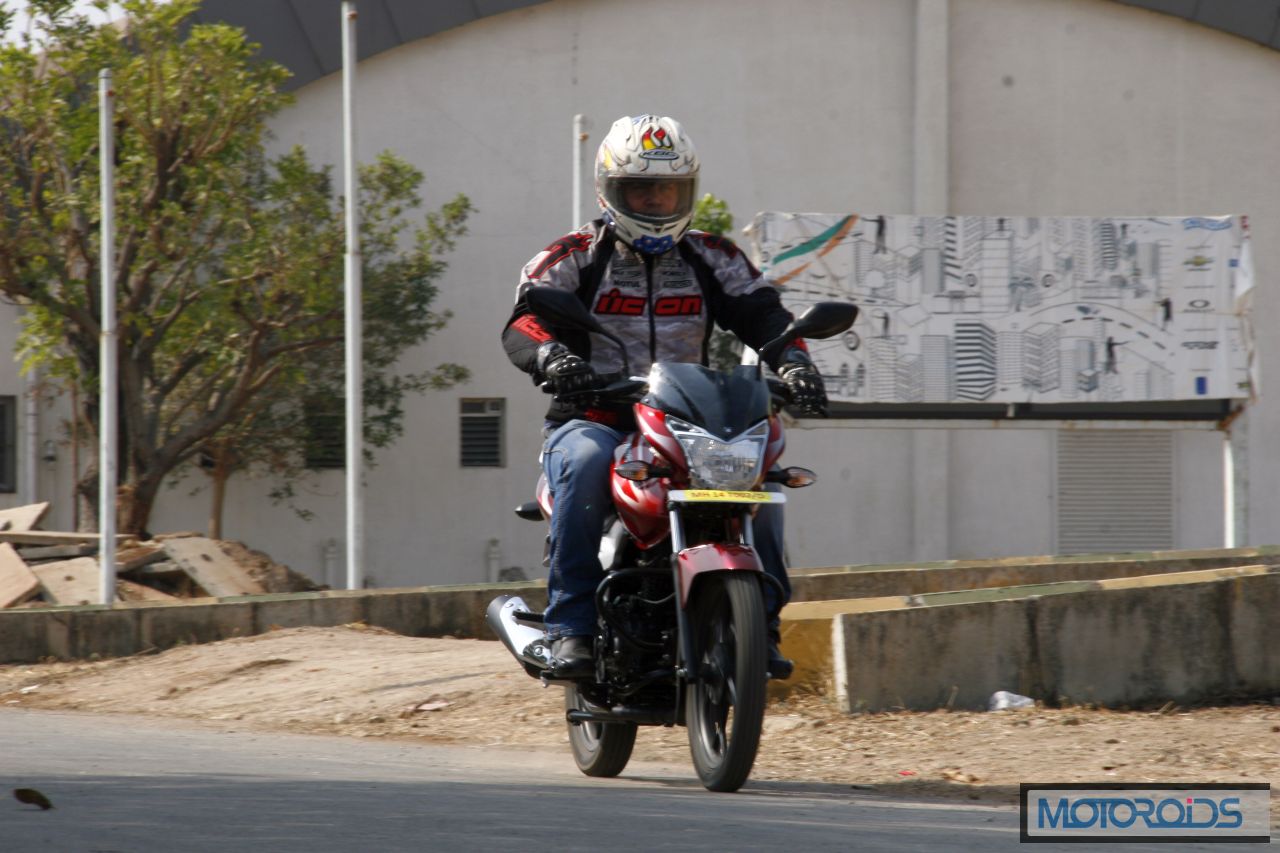 A class leading 100cc, 4-valve engine with 10.2 PS of peak power, snazzy alloy wheels, bigger, more premium feel and great fuel efficiency – those are the USP’s of the 100T according to Bajaj. The new Discover does indeed have an aura of excellence around it. So yes, looking at the product and its positioning, there may be some space for it. 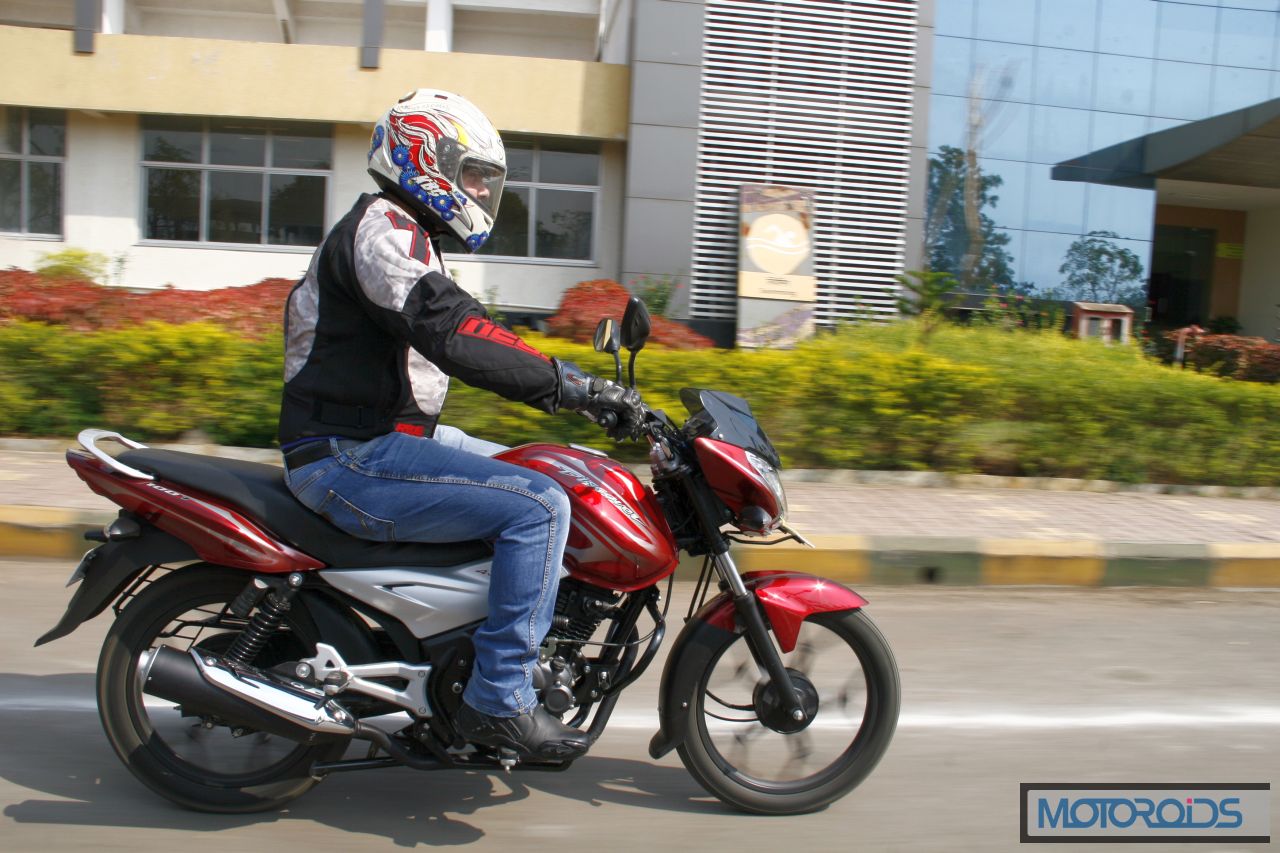 It’s almost identical to the bigger, more expensive Discover 125 ST. The Discover brand took its big leap forwards with the ST design wise, and Bajaj Auto have wisely let all the good work put into the 125cc bike flow down to this smaller capacity machine. The 100T looks like a sleek and modern machine, and even with that segment defining bikini fairing, manages to stand out from the crowd, thanks to its bigger size and trendy styling. A detailed review has been carried out for the new Discover’s design. You can read it here. 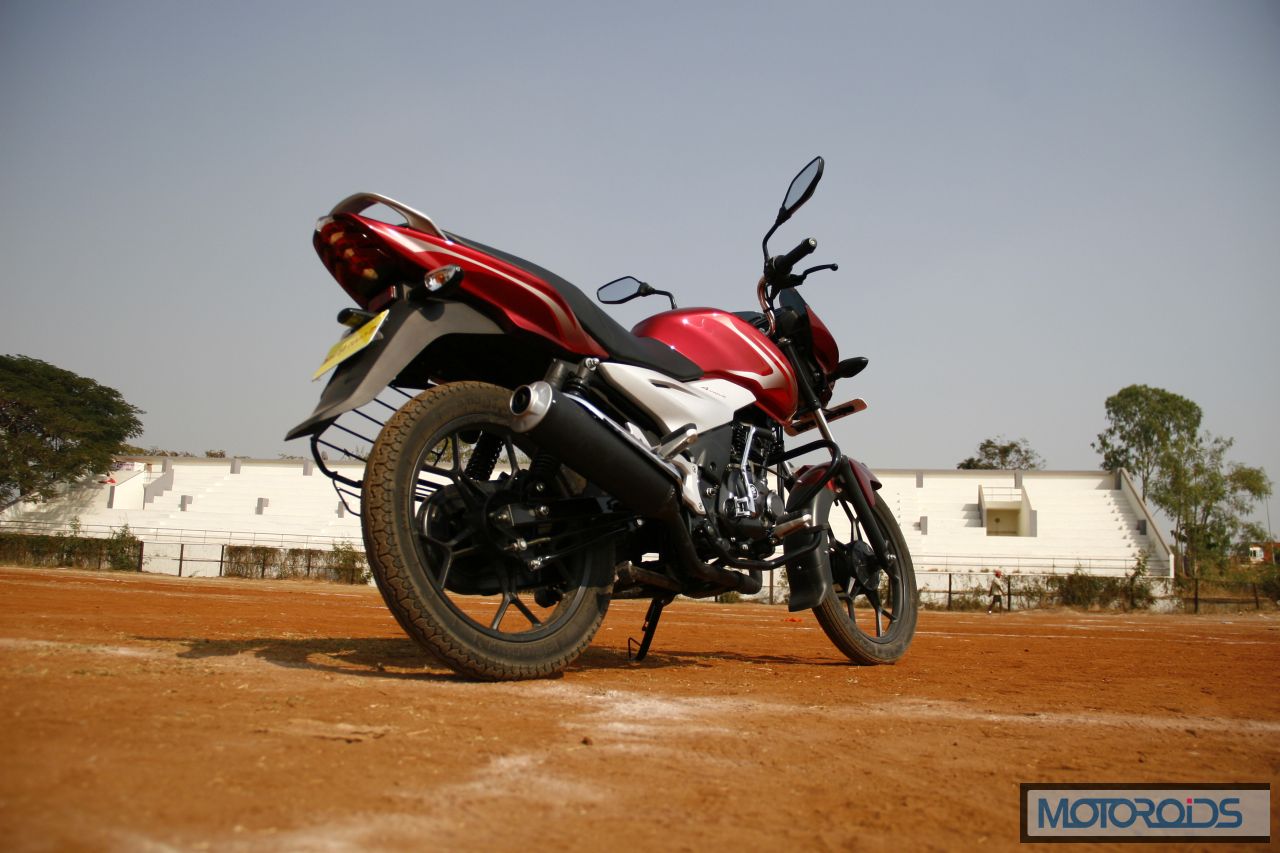 Visually, only a few things distinguish the 100T and the 125 ST. First, the mono-shock on the ST has been replaced by conventional dual shock absorbers at the rear. The hugger on the 125ST is absent here, there are no front discs, even as an option, and the open chain of the 125ST is now hidden completely under a cover. A brief discussion with Bajaj representatives also revealed that the seat for the Discover 100T is slightly longer and less elevated for the pillion as compared with the 125ST.

The discover 100T impresses with its styling and stature, making it one of the best lookings motorcycles in its segment.

Tell us more about the engine and transmission 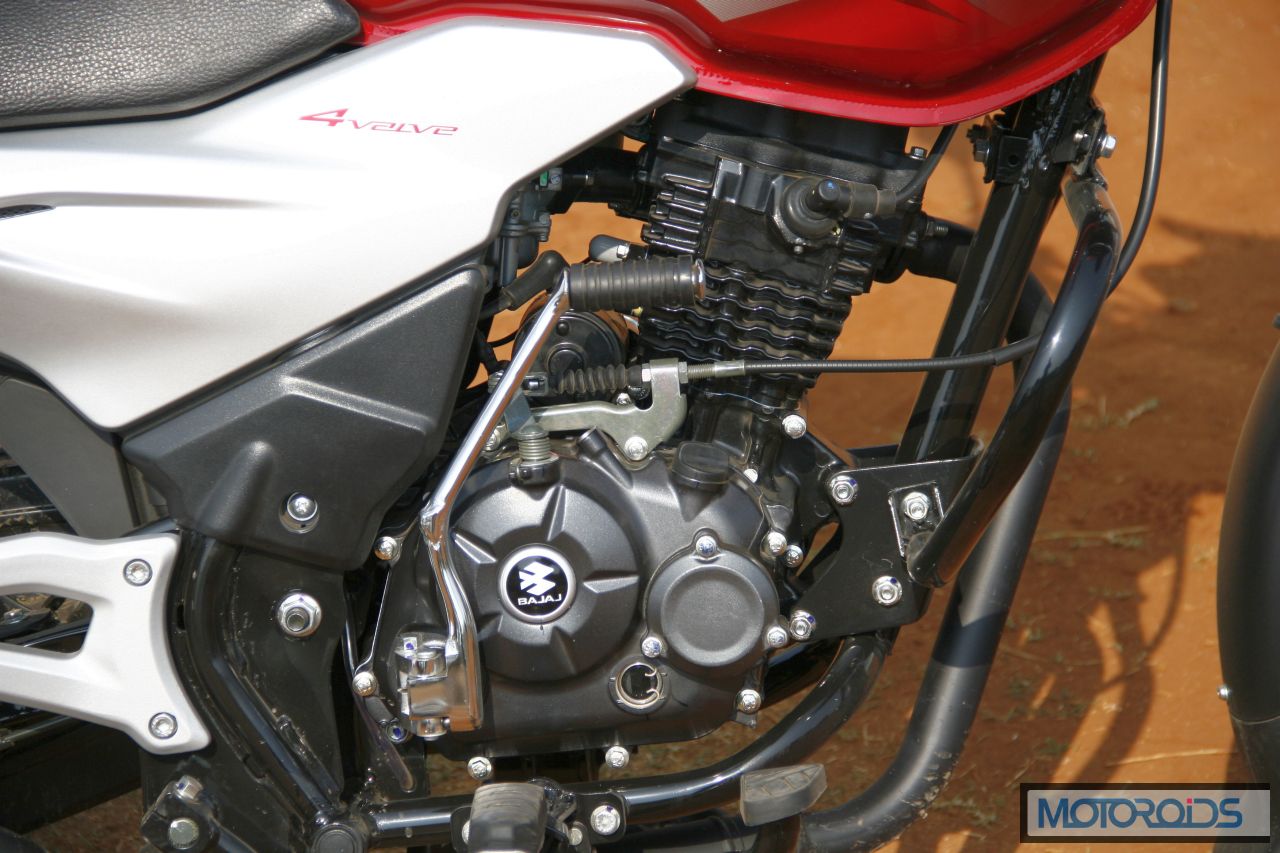 With its new 102cc 4-Valve twin spark engine, the Discover 100T boasts class leading power and torque figures. Peak power is rated at 10.2PS at a high 9000 rpm, while the peak torque output of 9.2Nm comes at 6500 rpm. The engine which features corrugated fins for better cooling is mated to a five speed constant mesh transmission with a wet multi-plate clutch

A 4-valve 100cc bike with more than 10PS of power and mated to a 5 speed transmission is headline news, surprisingly, for the world’s biggest market for this type of motorcycles. The new engine makes the 100T quite a unique bike for its category.

10.2 PS from 100cc? Sounds like a high revving engine – how good or bad is the tractability 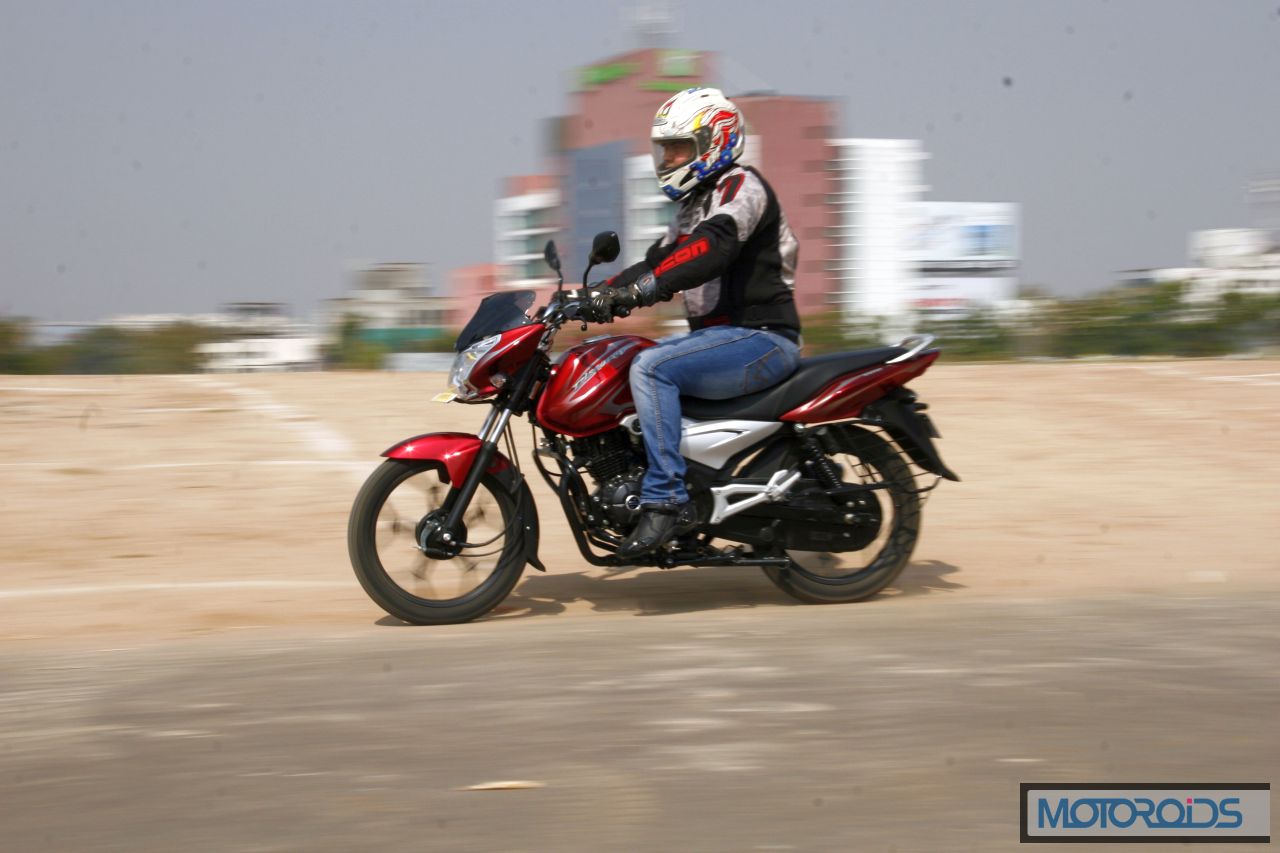 While the 4 valve engine is essentially peakier than other similar 2 valve units, it still manages to offer ample power and torque to trundle around at fairly low revs. There isn’t a tachometer on the 100T, so we weren’t able to pin point the engine behavior vis-a-vis the position of the rev needle. What we did, instead, was to notice the engine behavior at various speeds and in various gears.

The 100T engine is an undersquare, long stroke unit. This helps improve torque at lower revs, and negates the peaky character of the powerplant, to some extent helping the machine pull from lower revs in higher gears. 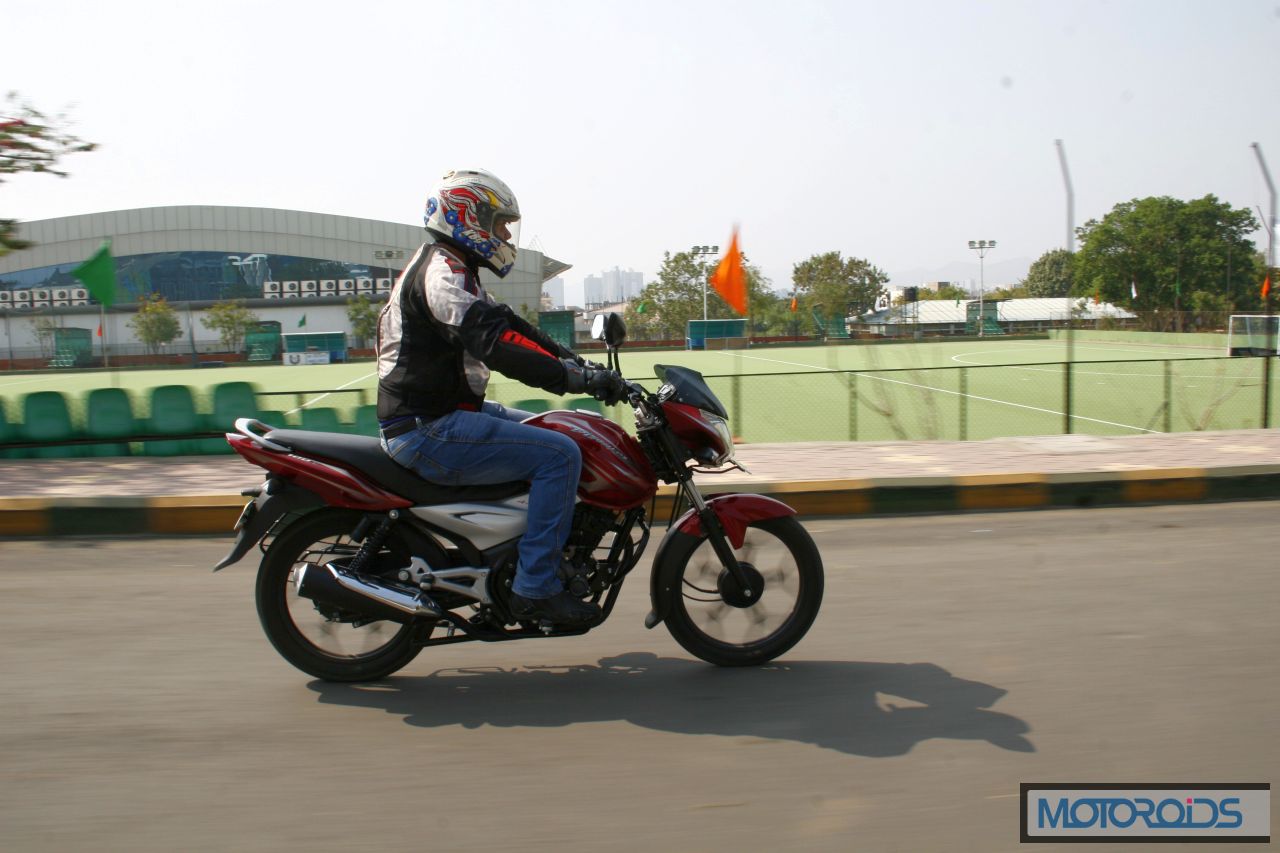 In third gear, the 100T didn’t whimper even as we summoned it to lug us from 20 km/h. Mild knocking up to 25-30km/h and the bike was pulling reassuringly. In 4th gear, the knocking turned into a splutter, with the bike breathing naturally after attaining 30km/h. Being the optimists that we are, we asked the 100T to manage the implausible task of pulling from 20kph in fifth gear. Needless to say it did cough to a halt. It did, however manage to manage a spluttering pull from a low 25km/h and moved convincingly post 35km/h

Now it will take a moron to try and pull a bike from 20 km/h in 4th or 5th gear in the real world, but we used the test as an indicator of the bike’s tractability. It exceeded our expectations, and shouldn’t pose any trouble negoatiating the slow city traffic in high gears. Our observation was further substantiated on our ride back through the Pune streets.
While we cannot be very specific, listening to the engine sound and looking at the speedo, it seems as though the 100Tpulls reassuringly after 3000 rpm, and starts delivering a good volume of power after crossing the 5000 mark.

Do those figures translate into perceptible difference in performance for the segment?

Most definitely! The new 100cc DTS-I unit may require the rev needle to be positioned a wee bit higher to make you feel its advantage, but when it gets in the zone, it stamps its superiority as regards performance.  Bajaj is claiming a genuine 100km/h top speed for this machine with a pint sized engine, and it’s not tough to believe them. A segment leading power to weight ratio figure of 84.3PS/tonne should only help the claim.

How good or bad are the NVH levels? 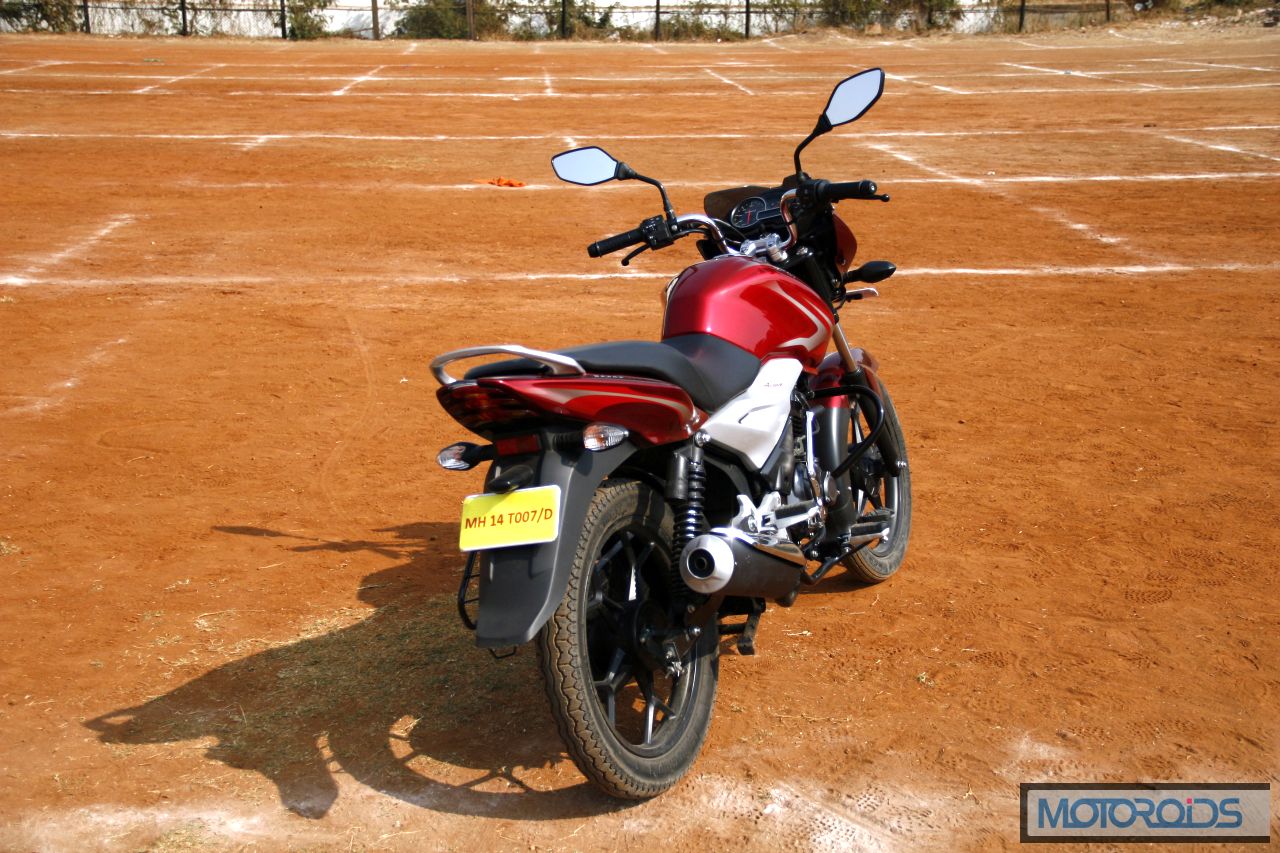 The sound from the new engine is typical of Bajaj. Unlike the soft, whirry sounds of Japanese machines, it’s a gruff, hoarse note that the new 100cc mill emanates – sounds masculine. The exhaust note too, is on the deeper side – something which has won Bajaj many fans over the years.

The engine, though a high revving motor isn’t one of the most refined units we have come across. Post 5000 rpm, some vibes start building up along with the revs. The engine doesn’t feel entirely at ease while functioning at the upper end of its rev range. There are vibes to be felt on the foot-pegs and the handlebar once you rev the engine into its power band, but thankfully these pulsations are well within the confines of tolerance. Never do these vibes get to a level where they border on to becoming an annoyance. Also, the vibes disappear dramatically while you’re riding in the city at moderate speeds – the rev-range where the bike will spend most of its lifetime.

There isn’t much to write home about the Discover 100Ts NVH levels. It scores averagely on that count.

How well does it handle? 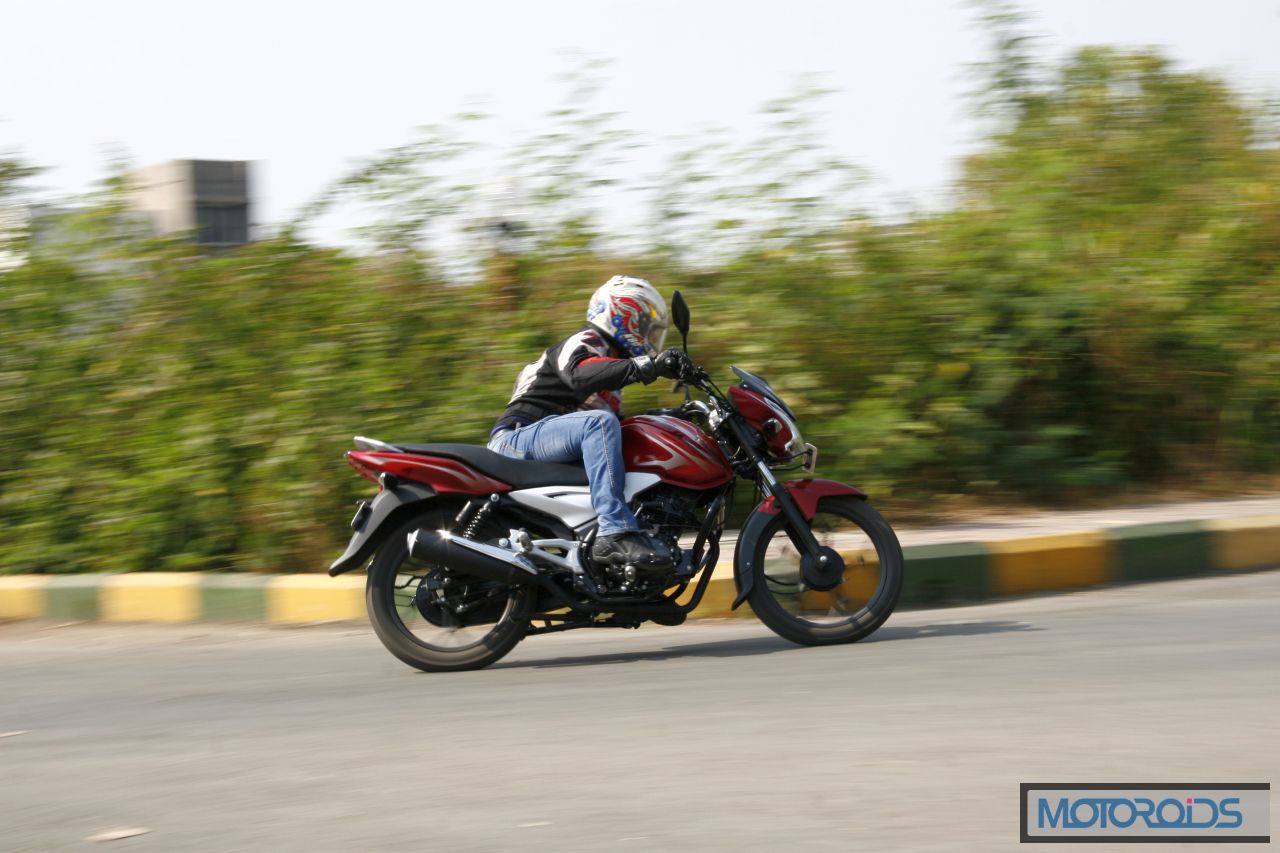 The Discover 100T has the longest wheelbase of all its competitors, and that observably aids its handling. Along with a well tuned suspension setup, with box type swing-arm, the 100T offers an above par handling package for the class. The baby ST made its handling prowess evident from the very first corner we threw it at. First, the longer wheelbase negates the tendency of the bike to tip mid-corner. You could feel the extension of the front wheel adding its bit of reassurance as you tilt the bike. The sizeable stature of the bike doesn’t make you feel awkward even as you lean off it. It’s pleasantly well balanced throughout its course on a corner.

Secondly, the suspension has been set up well. It’s neither too soft, nor too stiff. The dampers absorb the tension mid-corner rather adeptly, and there isn’t any wobbliness even as you transfer you weight from one side to another in situations, such as while negotiating a chicane. Tilting the bike mid corner feels more reassuring than most other 100cc bikes around. The Eurogrip rubber at both ends offered reasonably good grip on the dry and well laid out pieces of tar we rode the bike on.

The ride quality as we mentioned earlier, is somewhere between hard to squishy. The bike takes most of the road imperfections in its stride with only the more abrupt bumps managing to filter in to a perturbing level. The riding position aids comfort too – it’s not overly upright, nor sporty. It’s just that wee bit short of a typical commuter position which makes you feel at home no matter whether you are coming to her from a Splendor or a Pulsar. It helps you loosen or tighten your elbows at will, and transfer a bit of a shock to the wrists and shoulders whenever necessary.

The 100T manages to gain a good amount of brownie points as regards handling. The ride may not be the cushiest, but it’s tuned to attain a more balanced experience.

What features do I get? 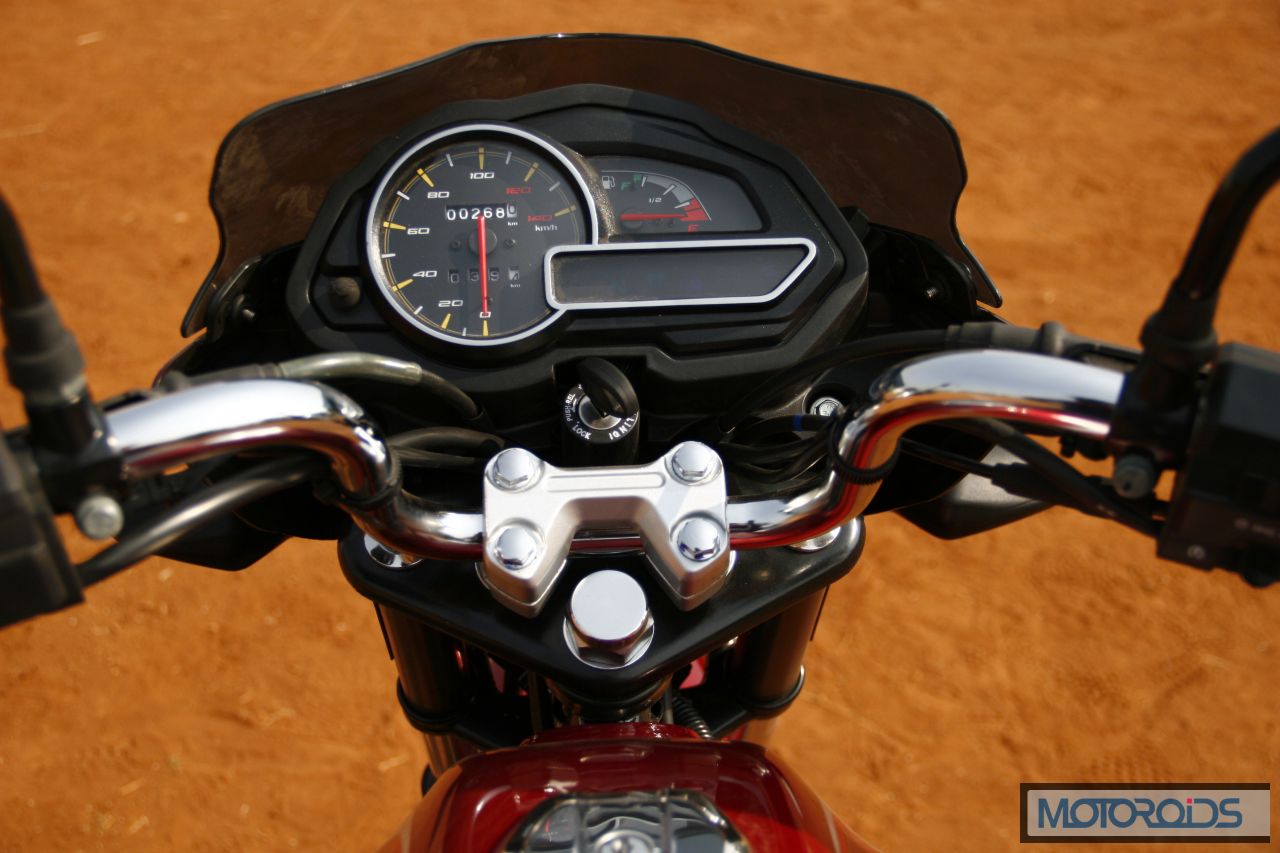 Apart from the powerful 4 valve engine and a five speeder tranny, you get an electric start, alloy wheels, maintenance free battery and a day flasher. Features like side stand, crash guard and saree guard have long been considered a part of standard equipment by the Indian customers, but the trend seems to be changing fast. Honda, of late, has been charging its customers separately for these items. We’re hearing murmurs that Hero Motocorp is gearing up to follow suit as well. The trick is to offer a bare basic bike, without any accessories, reduce the ex-showroom price, lure the customer in, and then charge him 2 to 2.5 k extra for the aforementioned fitments.

In that context, the feature list on the Discover 100T looks quite liberal, taking into account the fact there is only one variant of the bike available with an ex-showroom price tag of Rs 50,500 and has all the features mentioned above. 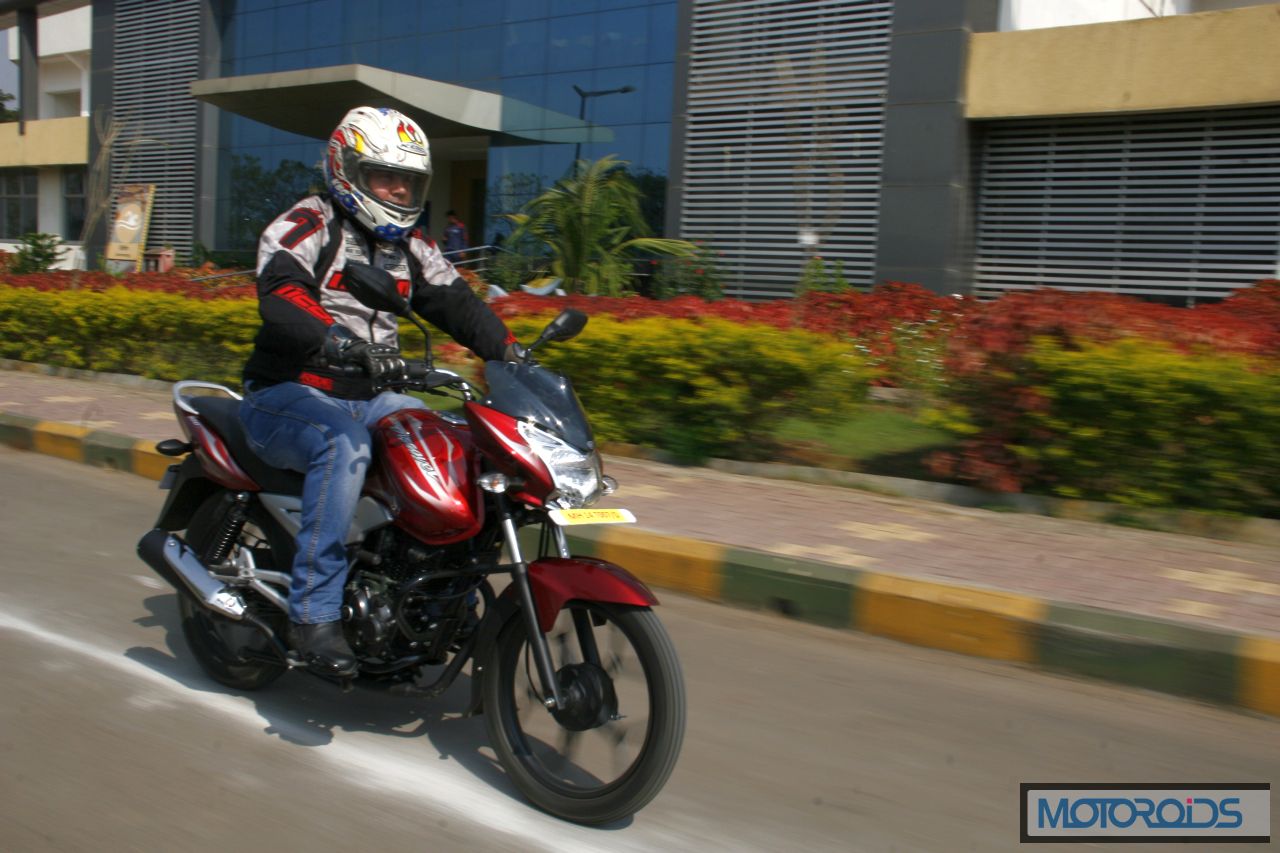 According to the field trials that the Bajaj’s marketing machinery conducted, the participants reported a real world fuel efficiency of 70 kmpl. We cannot corroborate that figure, since we did not have the bike for long enough. However, the heavy dose of tech on the engine, and its better specific output should ideally aid efficiency. The bike, even if we act as a devil’s advocate should be able to return a real world figure of 55-60 kmpl – still par with the segment.

So what’s your verdict 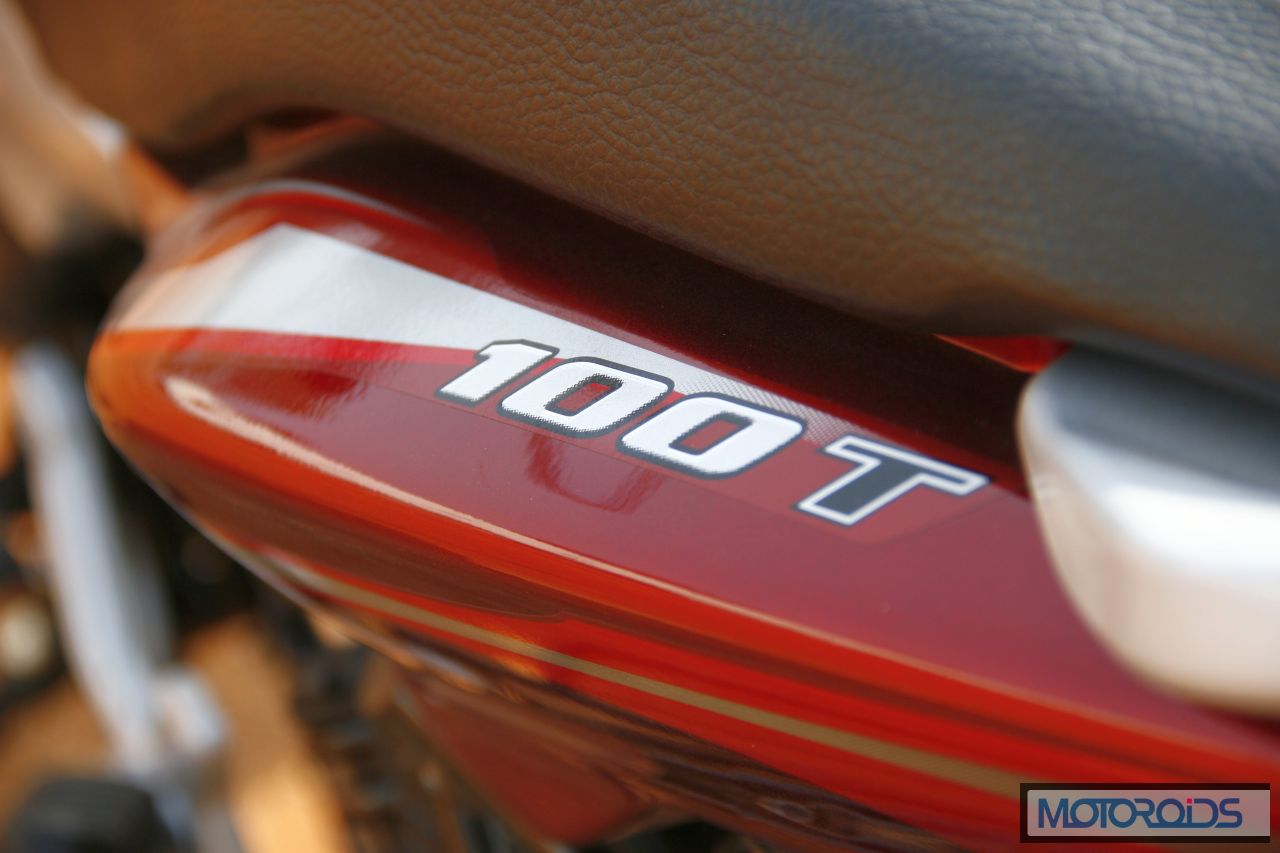 The 100T managed to impress us as a new product. It’s exceedingly well specced for the segment and aesthetically looks more appealing than most of its rivals. Engine, handling, features, performance, efficiency – the Discover 100T has quite a lot going for it. It’s priced well too for what it offers and should make many a customer in the upper 100cc segment stop and think before they make their decision.

The relative lack of refinement is a chink in its armor, but as mentioned earlier, it’s no deal breaker. Pound for pound, the 100T is recommendable as a new product. It will, however, have to pass the test of time to win over customers in this segment, who value longevity and reliability as much as any other quality in a motorcycle. We wish the new Disco all the very best in its endeavour!