Aprilia SR150 upped the game in the scooter segment with its potent 150cc engine, an appealing design and an aggressive price tag. We had a great time riding the scooter for the short First Ride Review and an exhaustive Real Life Test back in 2016. Fast forward to February 9, 2017, Aprilia launched an even peppier version of the SR150 and christened it as the SR150 Race. But is it just a sticker job, or is that flashier looking machine really quicker than the standard model? Let’s find out. 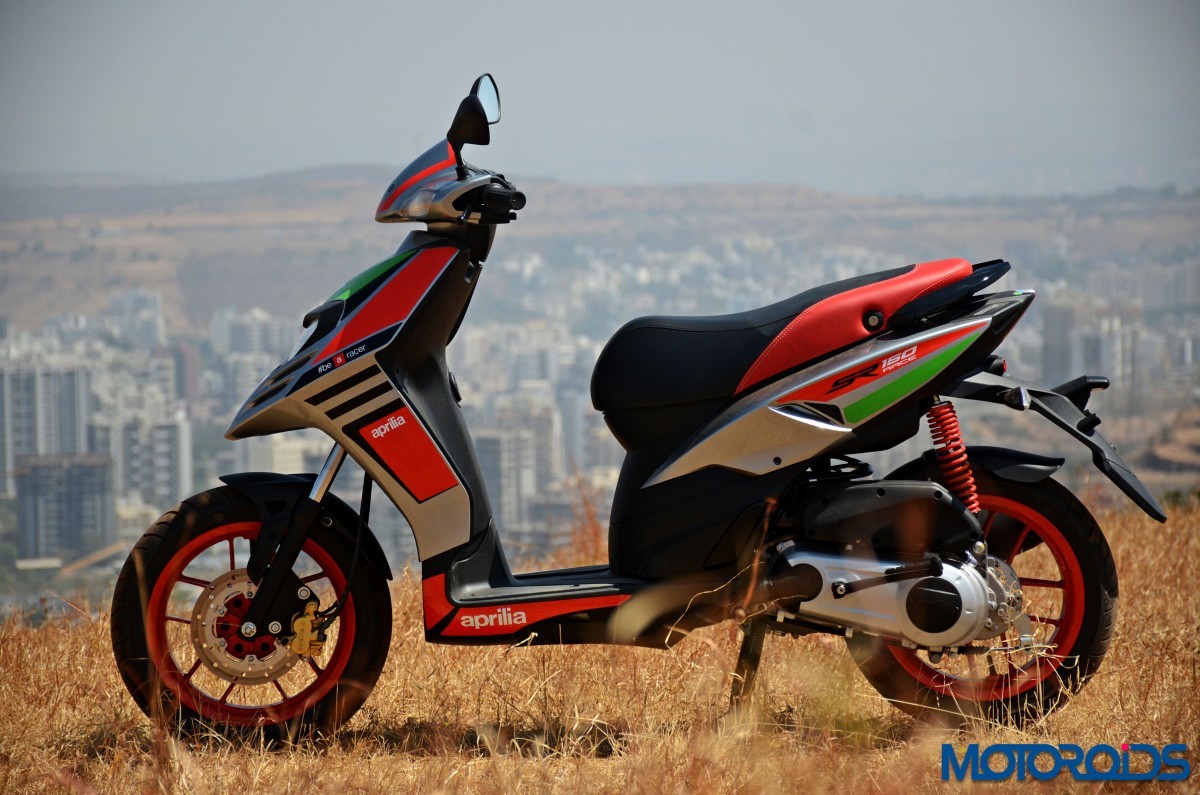 Does it look better than the standard SR150?

There are absolutely no changes to body panels here but Aprilia has strapped the sporty scooter with its MotoGP racing motorcycle – the RS-GP – inspired graphics. The Race edition is only available in maze grey paint and comes equipped with the RS-GP livery. Part of the front apron above the dual headlight dons the green, red and black stickers while the lower part holds the Italian flag. 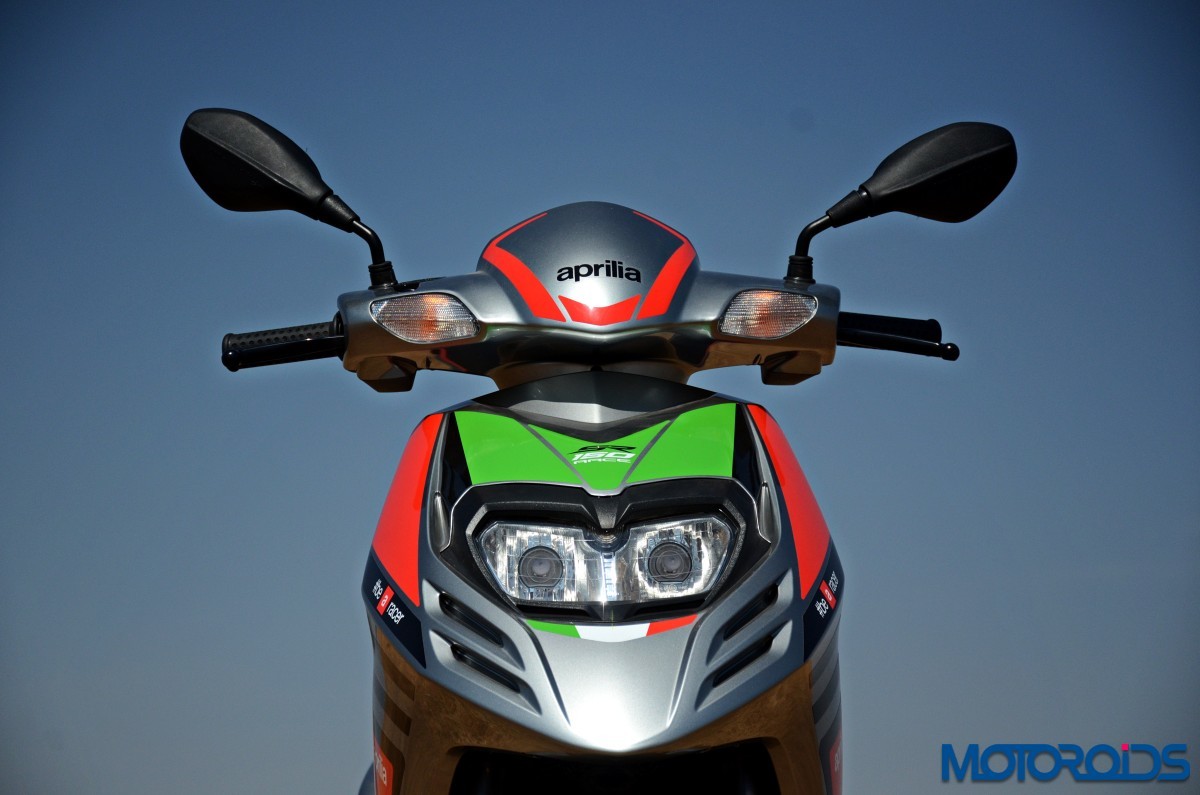 An SR150 Race badge sits in the centre, right above the headlight. A #BeARacer tag has been placed on both the sides of the headlight while the Aprilia branding can be seen on the footboard and on the lower side of the apron. The side panel continues with the RS-GP theme with a prominent SR150 Race badge. Apart from the new graphics, the scooter also gets Fluo Rosso (red) alloy wheels and suspension, and a gold coloured brake caliper upfront. 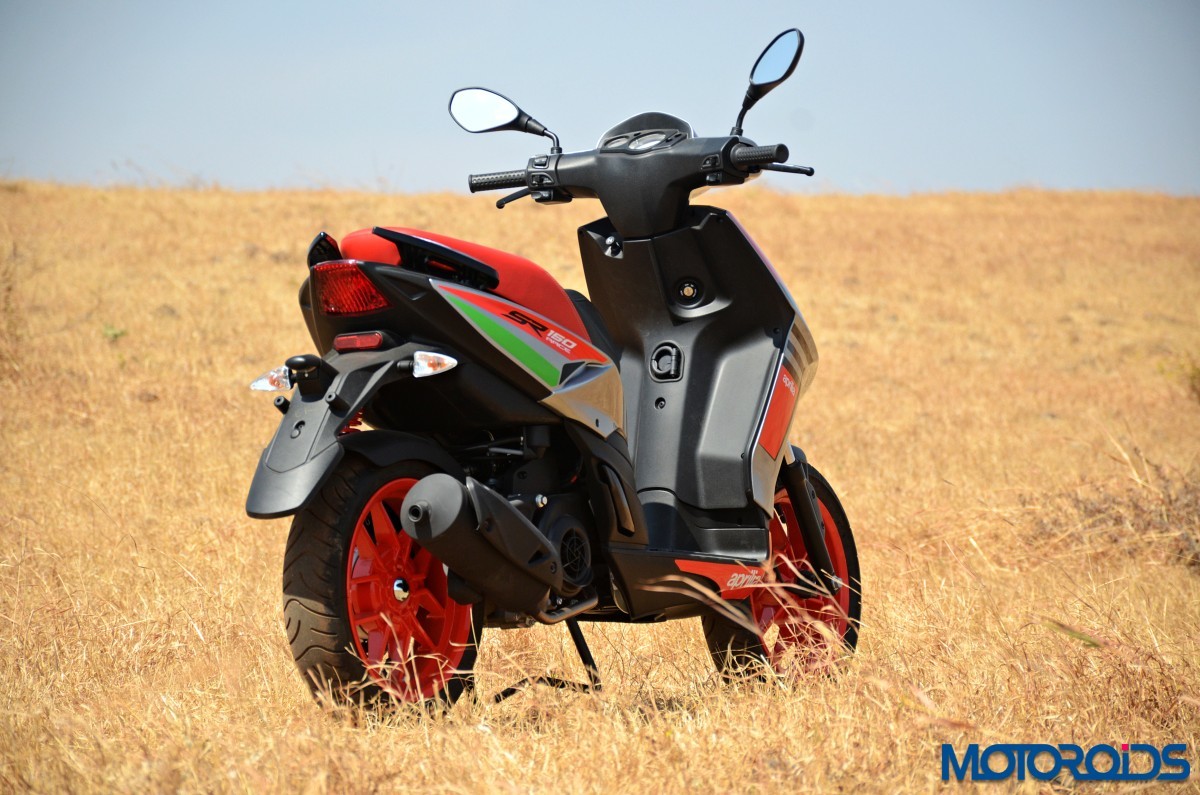 Besides the added graphics, new colour for the rims, suspension and the brake calliper, the SR150 Race remains identical to the standard model. There are no changes to the body panels, pillion grab rails, instrument cluster, the switchgear or the Thailand sourced Vee tyres. The build quality, finish and switches are finished well, built well, and we really do not have any complaints about them.

Does it look better than the standard model? Yes, if you have a thing for motorsport or such. Those with calmer sensibilities would found those bright colours too loud, but there would also be plenty others who would twist their necks for a second look. The crossover scooter looked fantastic in standard form and the Race edition is definitely more eye catching. The RS-GP livery looks jazzy and appealing to those who understand and appreciate motorsport. For those who don’t, probably you shouldn’t care if you’re buying this one here. 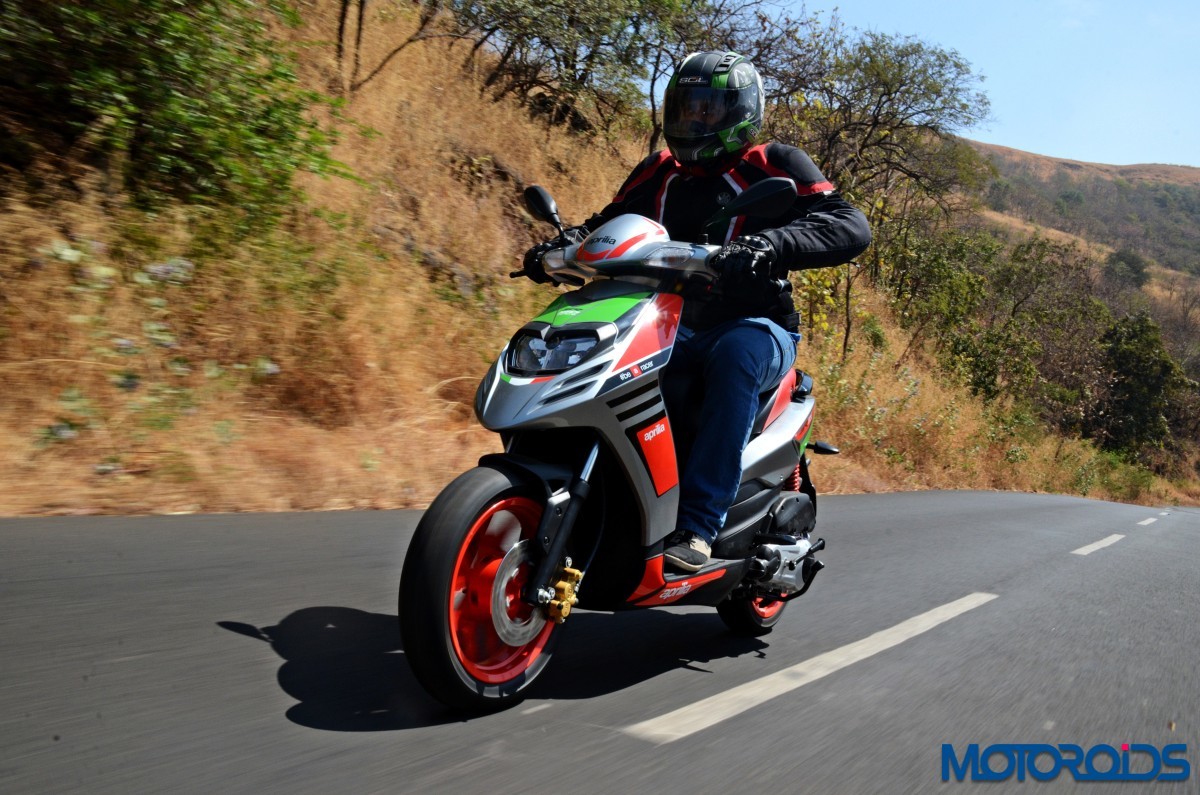 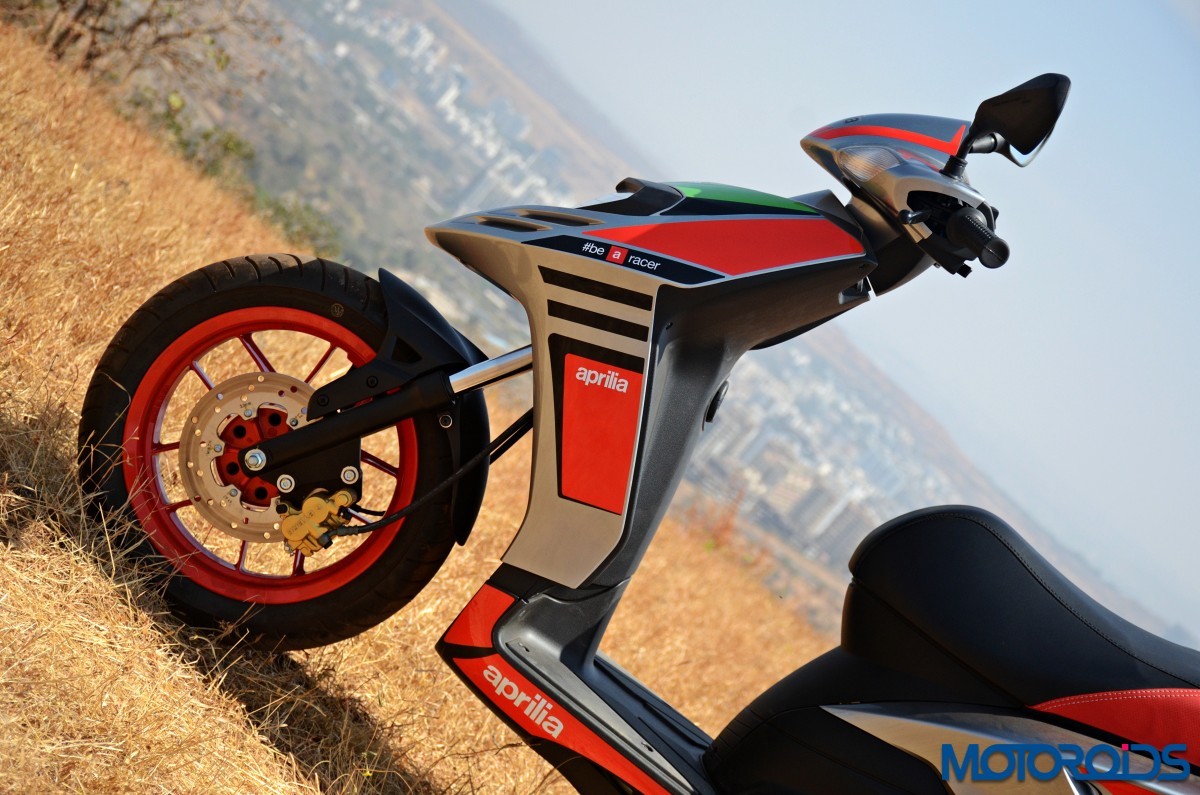 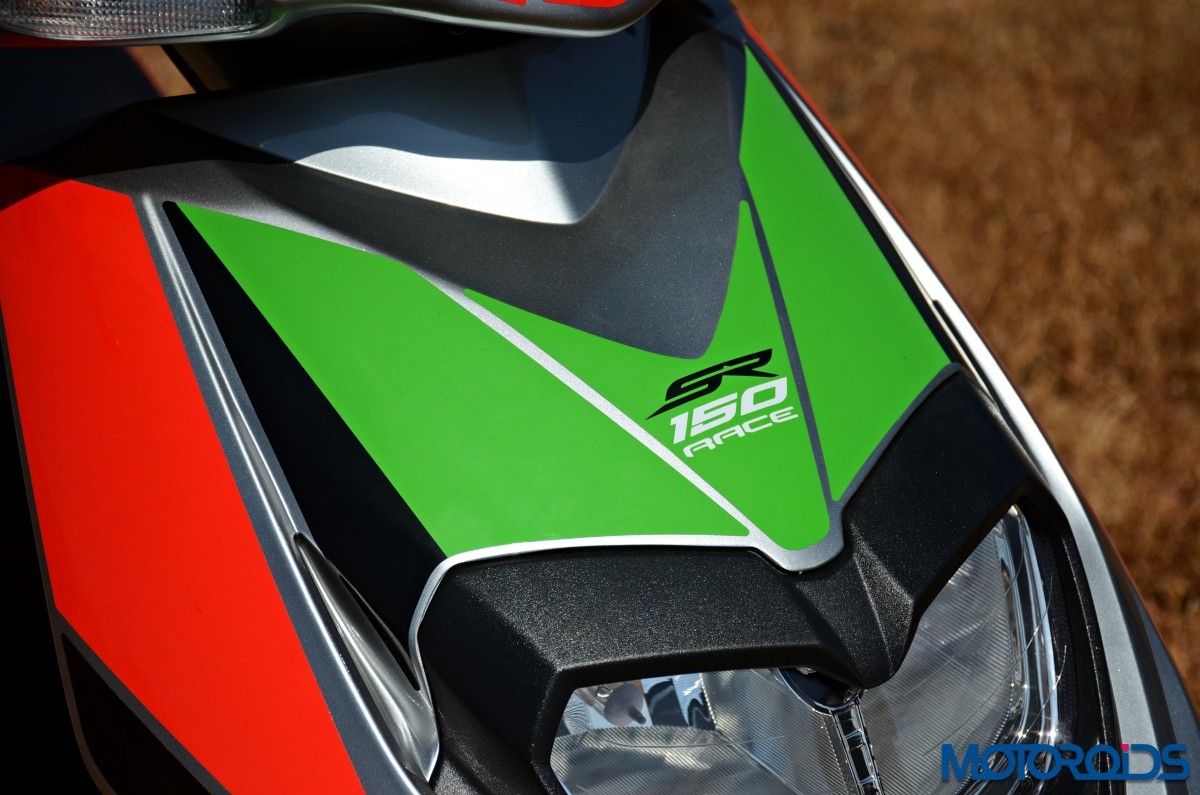 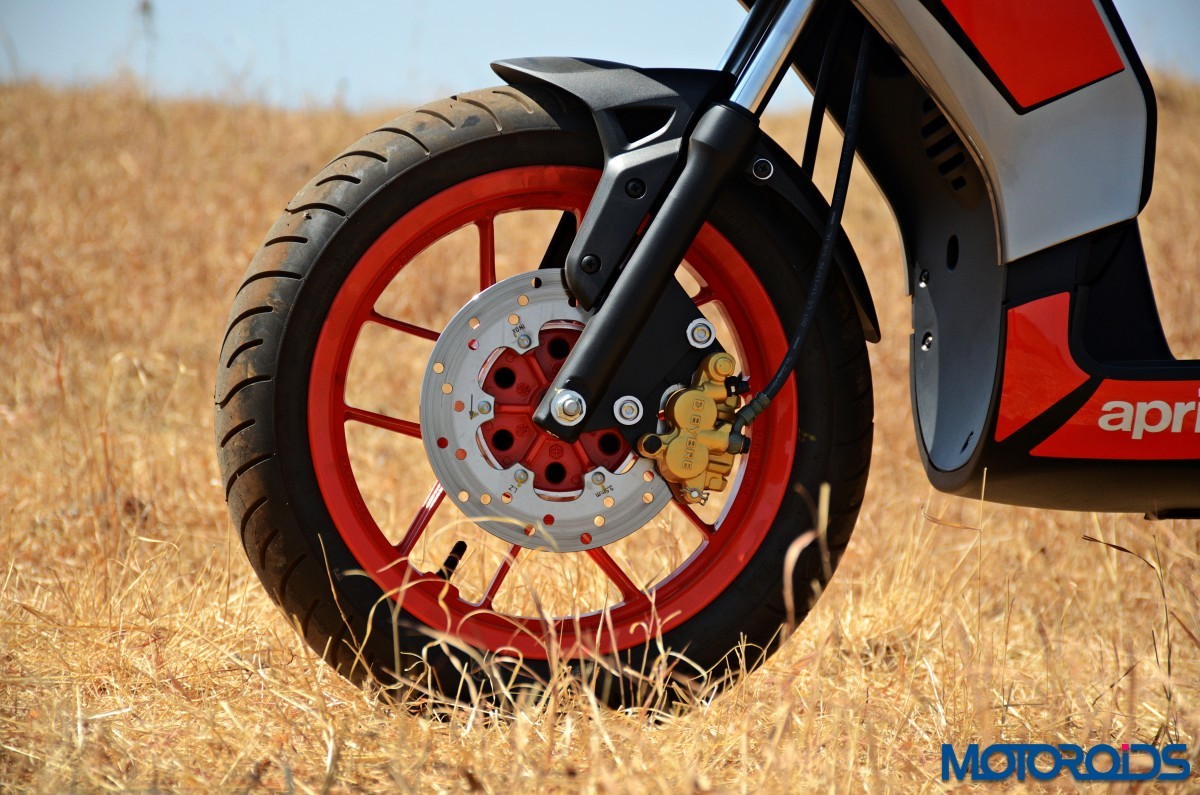 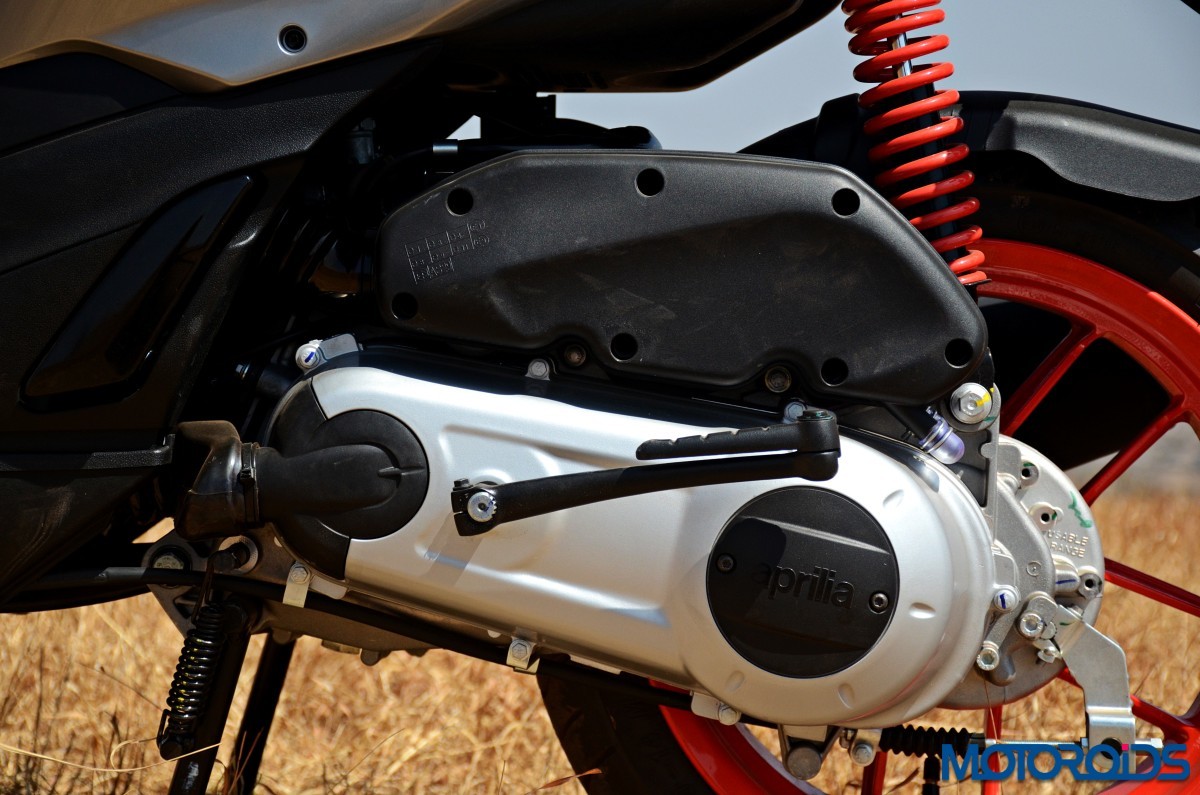 The CVT gearbox has been tuned for better initial acceleration. The feedback from the rear drum brake has improved too 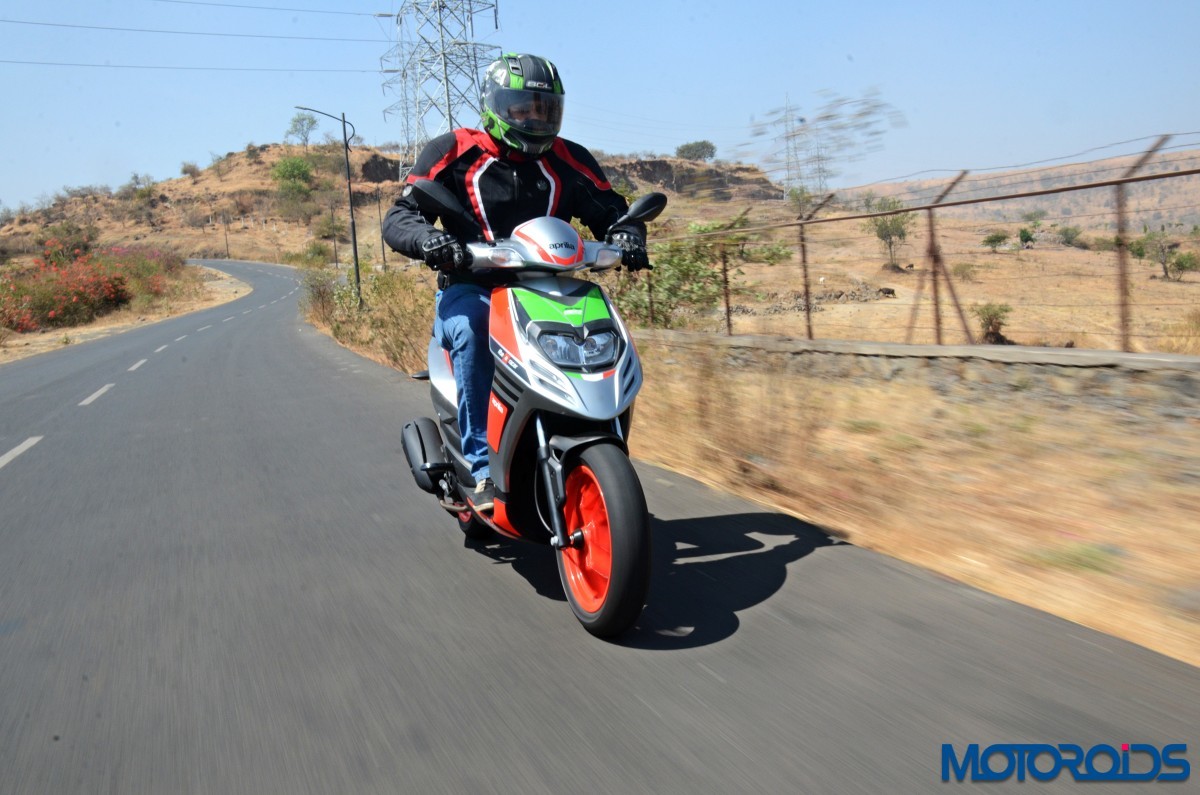 While we could not get the proper 0-60 kph and 0-100 kph timings, the Race version does feel slightly quicker than the standard model 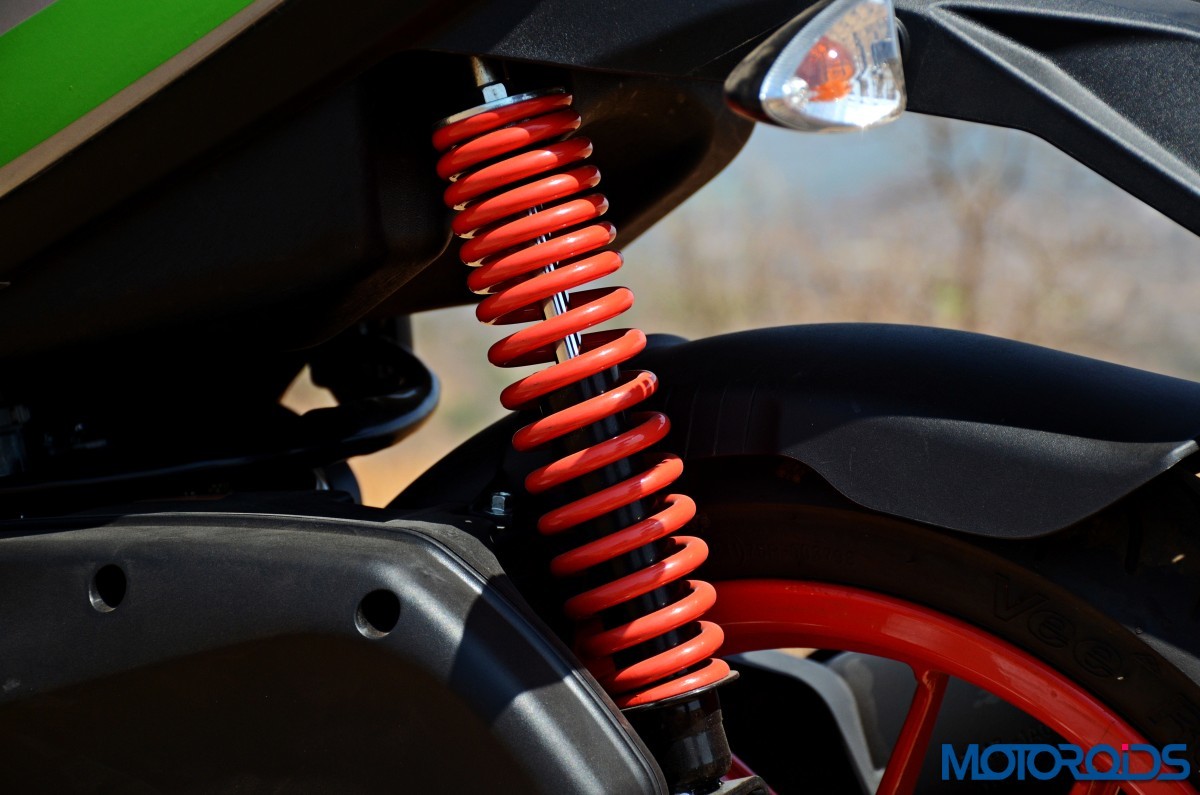 The suspension setting still tilts towards the stiffer side but that’s something that we can live with for its handling prowess.

How does it perform?

Let’s get the numbers out of the way before we talk about that new tune to the gearbox. The SR150 Race draws power from a 154.8 cc, single-cylinder engine which is tuned to produce 10.4 HP @ 6750 rpm and a maximum torque of 11.4 NM @ 5000 rpm. While the performance numbers are same as the standard SR150, the folks at Aprilia have re-tuned the CVT Gearbox for better low-end acceleration which translates into more pep and punch off the line – something every city rider seeks from his/her automatic transmission scooter. 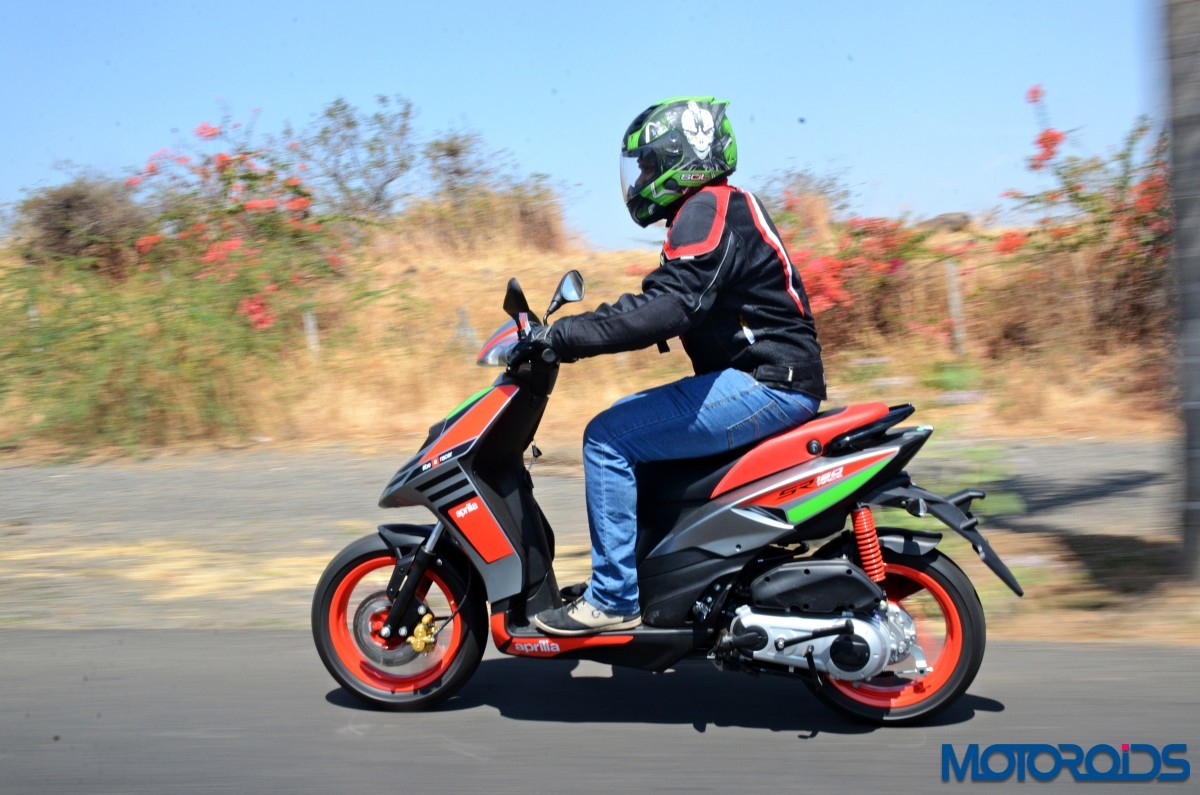 The Race version is claimed to be second faster in the quarter mile run, which is not much for a city scoot, but there is a difference alright. While riding, the SR150 Race does feel mildly faster than the standard model off the line. 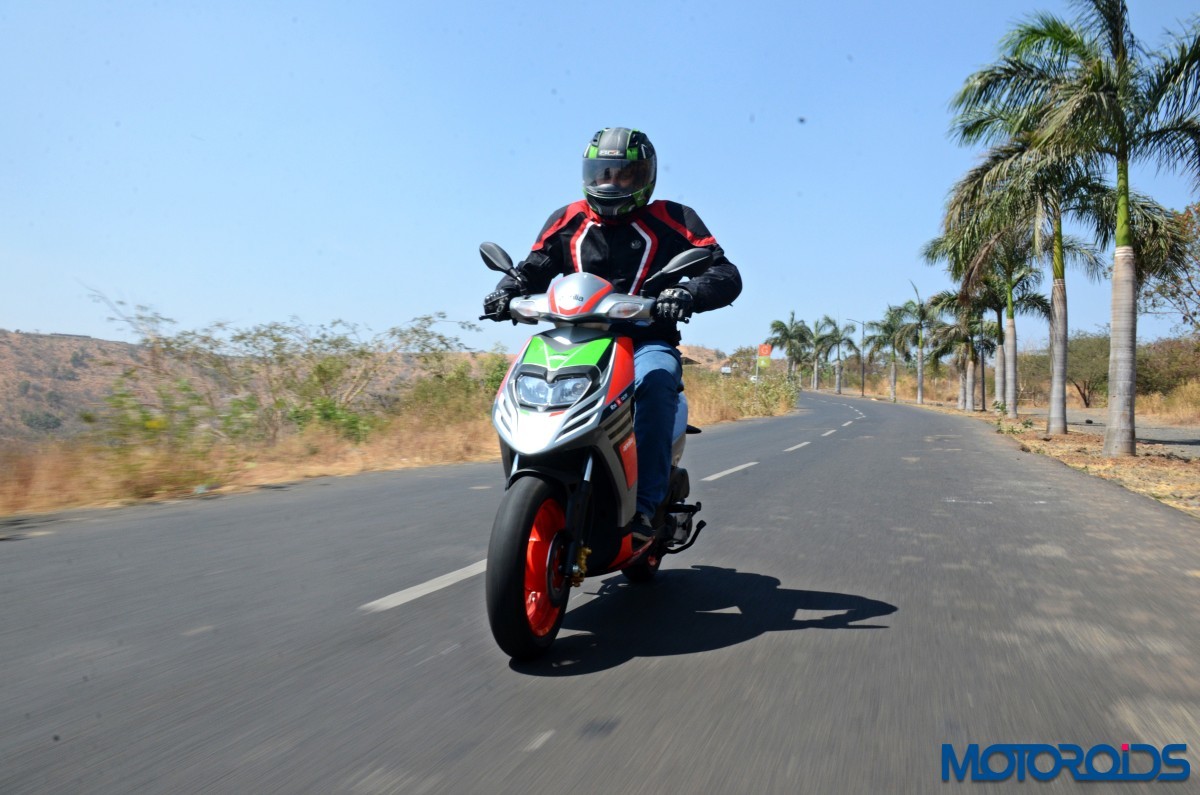 Stopping power is continued to be provided by a single disc upfront and a drum brake at the rear. So while it continues to deliver sharp response from the disc brake upfront, the rear now offers better feedback than the standard model we tested back in 2016. 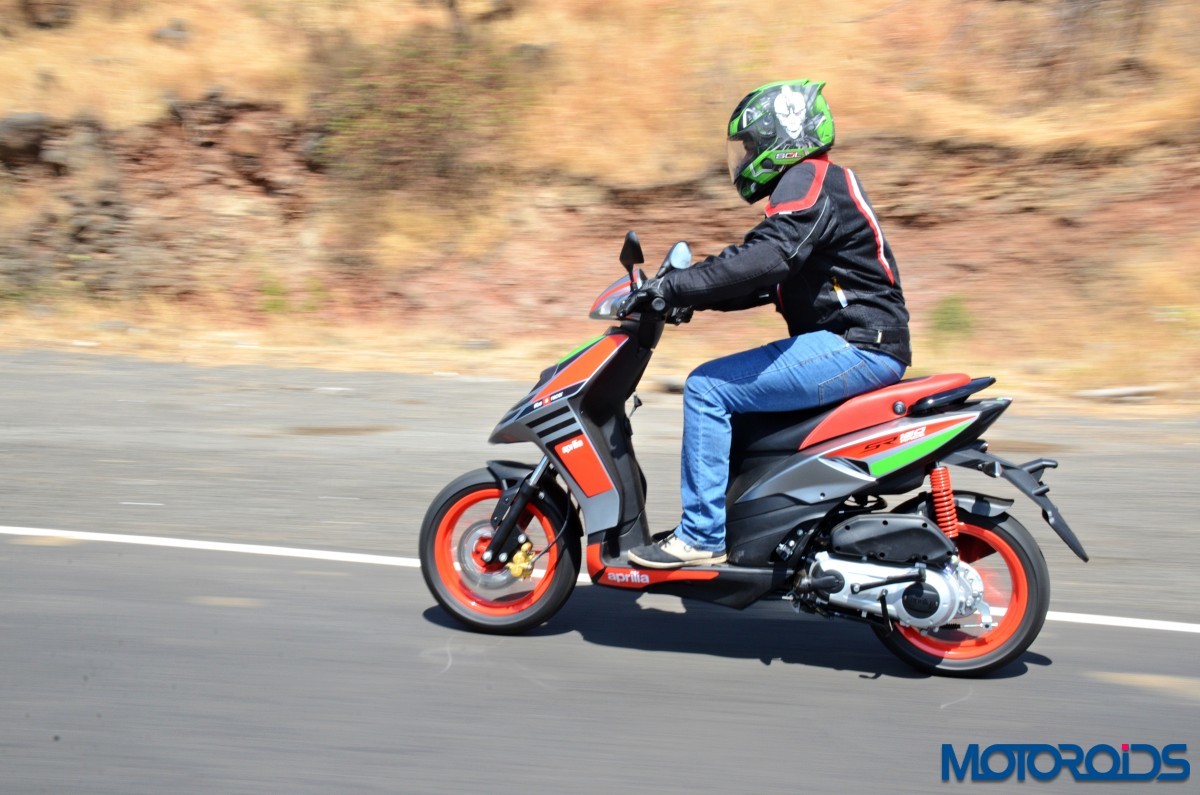 To be honest, the SR150 Race variant is more of a visual overhaul and we didn’t really expect a massive change in terms of performance. Meanwhile, Aprilia is considering to offer an aftermarket exhaust and a carburettor kit for the SR150 Race which will marginally enhance the performance. The folks representing the Italian bike manufacturer, however, remained tight-lipped about any estimates on the actual increase in power output. 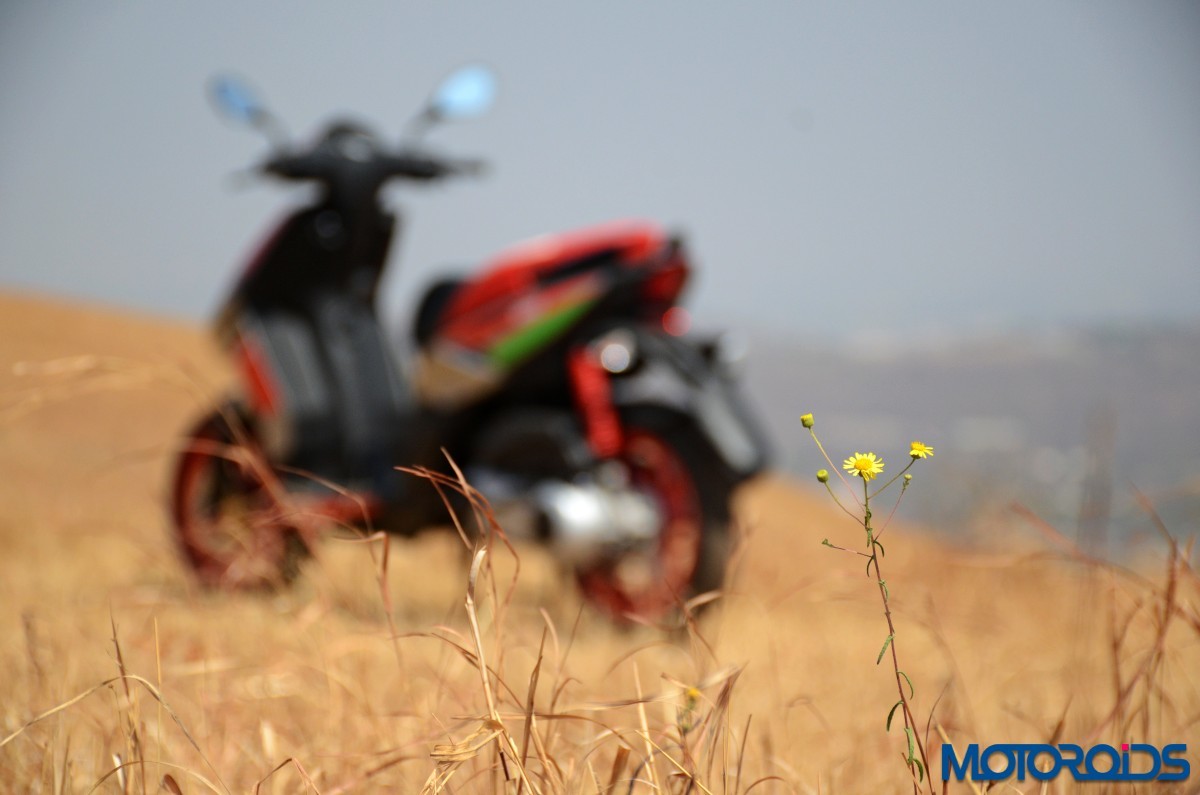 So should I buy the Race edition over the standard model?

As aforementioned, the SR150 Race is more of an aesthetic enhancement than a significant mechanical upgrade. The asking price for the SR150 Race stands at INR 70,288 against the standard model’s INR 68,803 (both prices ex-showroom) which is a marginal difference and it’s worth every extra penny over the standard SR150 if you are into aesthetics, and would prefer a racing livery for your performance scoot. The INR 1,400 you pay for new graphics, paint on wheels and suspension and the slight bump in the engine is a definitely worth every single extra paisa. To be honest, it’s a steal if you are a MotoGP fans and were looking to buy that scoot any way. 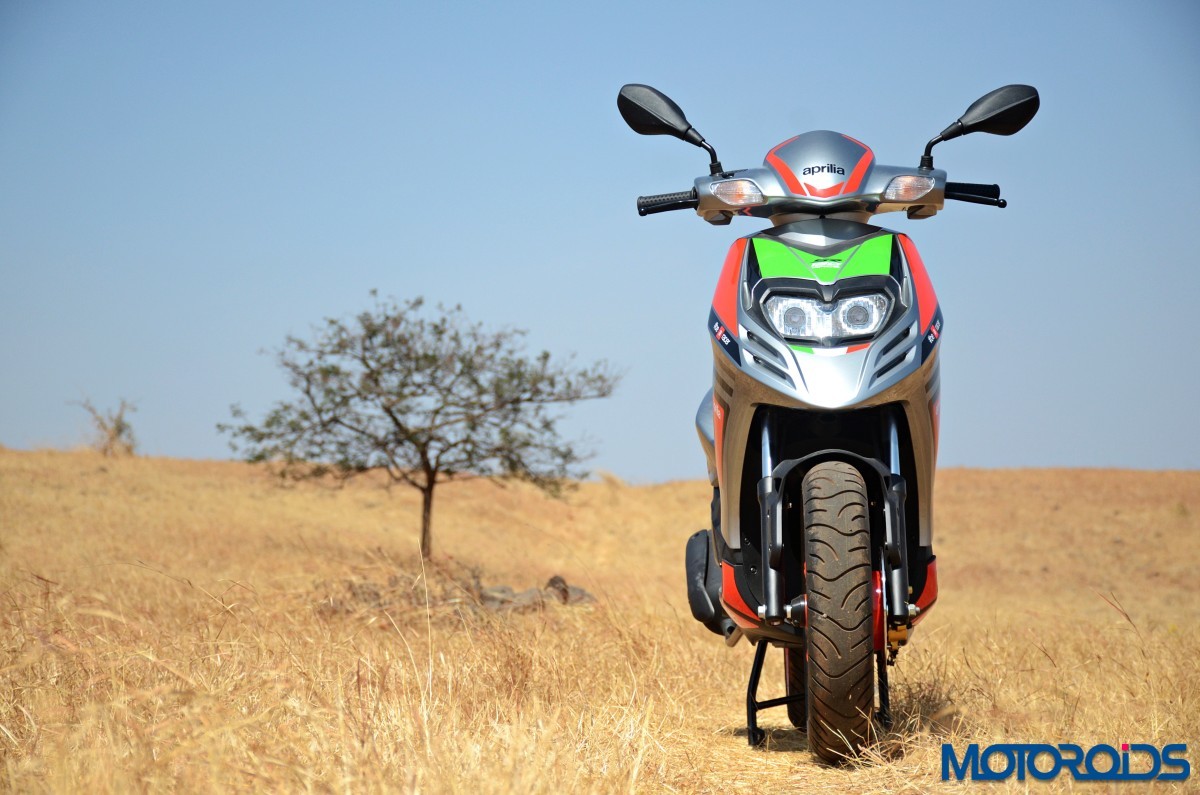 We’d be riding the scooter again for an exhaustive review very soon. Meanwhile, check out these snaps of the SR150 Race from our first ride review. Click on the thumbnails to expand.