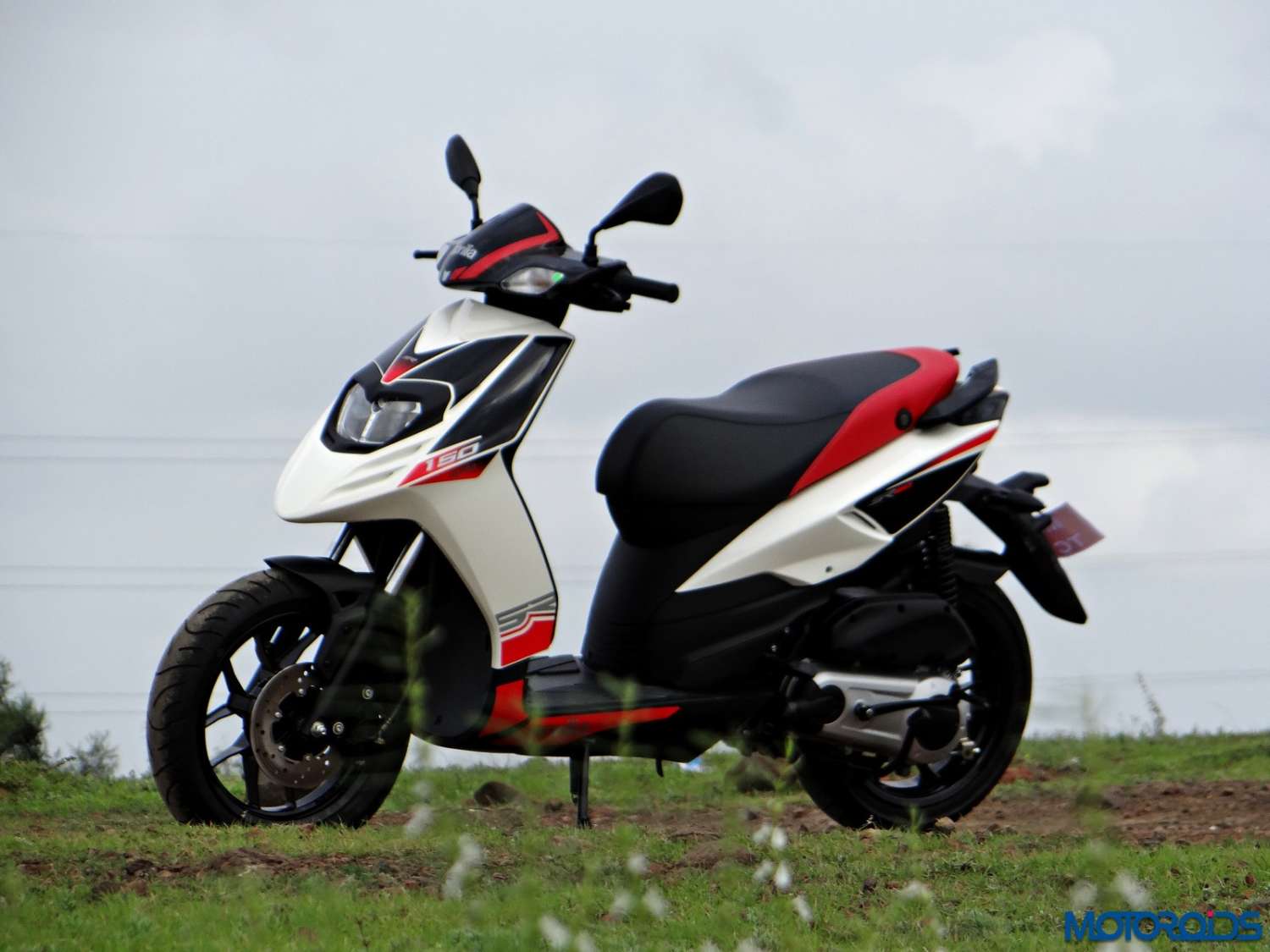 Most of us motor heads would’ve dreamt of owning an Italian ride at least once in our lifetime. Most such machines, however, built with utmost passion and character, have been adorning the bedroom walls or desktop screens as they are beyond the reach of most of us. In the past few years, however, some manufacturers have understood the importance of providing more accessible motorcycles and we saw some relatively affordable products being introduced by the Italian marquee like Ducati and Benelli. But the folks at Aprilia have taken the game to a whole new level by introducing their sharply styled, affordable scooter – the SR 150. 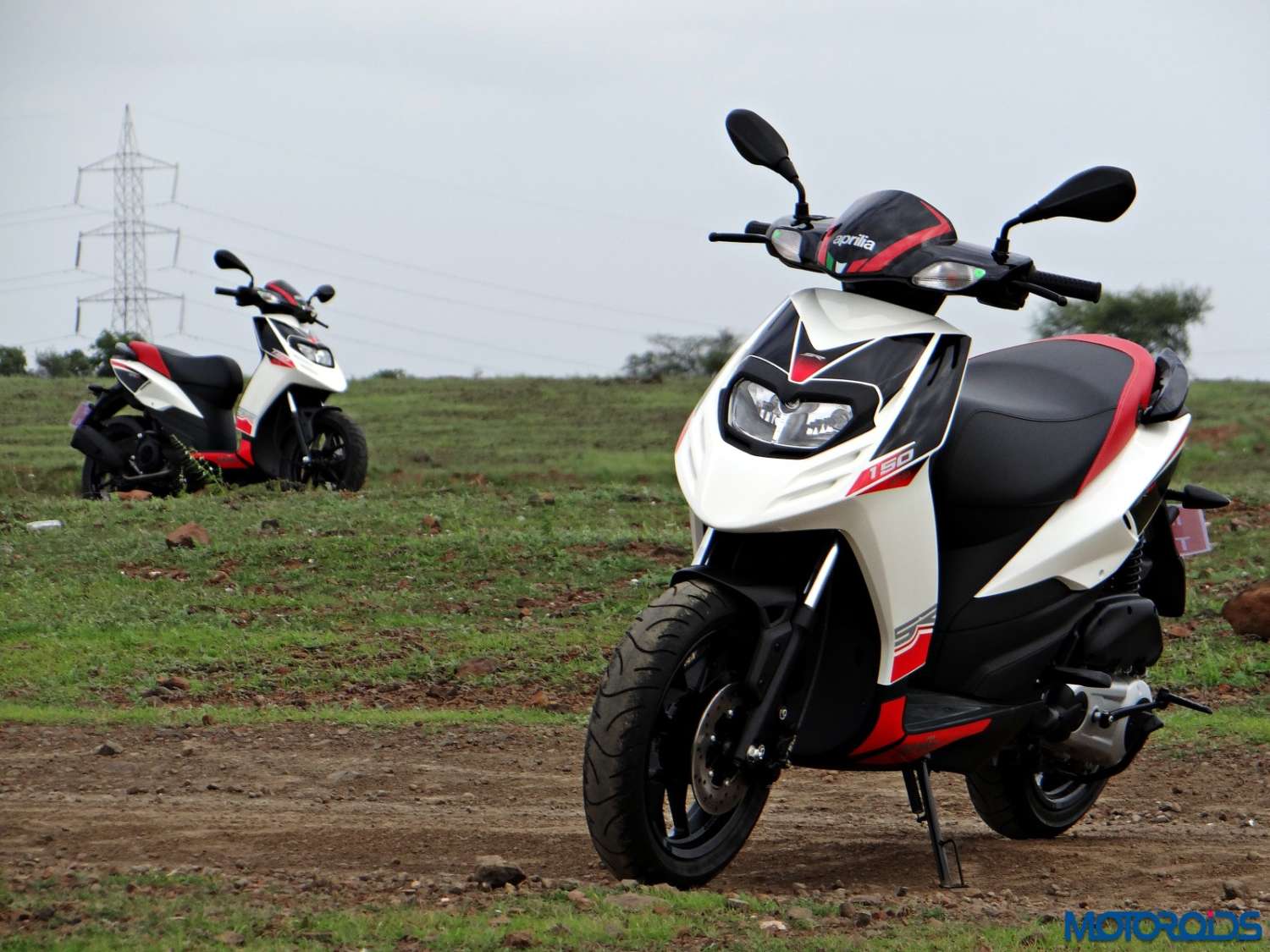 The SR 150 made its show debut at the 2016 Auto Expo in Delhi, and after a six month long wait, we finally got an invite from Aprilia to visit its Baramati factory to watch the new scooter roll off the assembly line and take it our for a spin too. Here’s what this sharply styled, exciting new machine is like to ride. 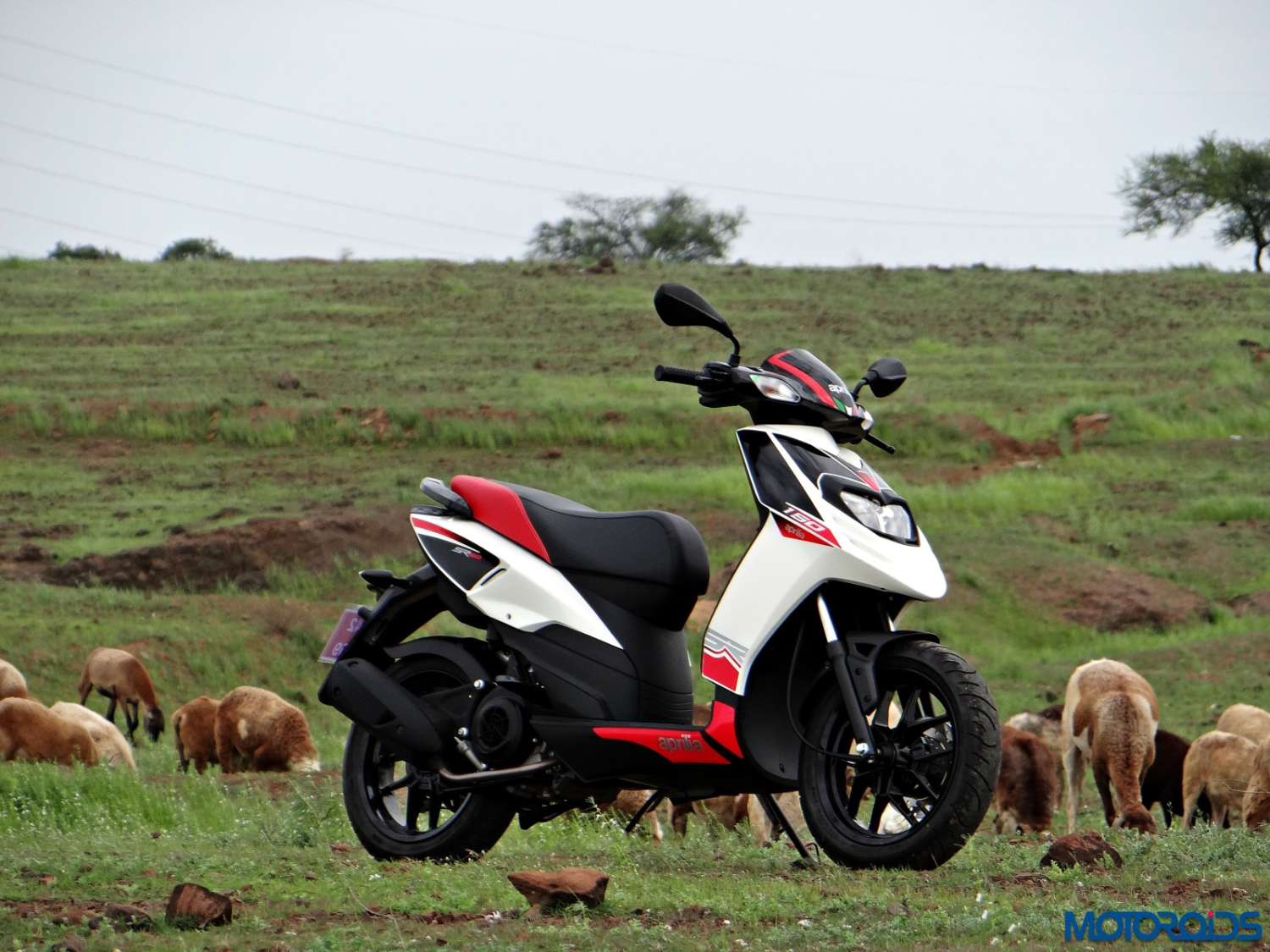 To start with, the new Aprilia SR 150 is one of the most appealing and sporty scooters in India today and there probably are hardly any products that come close to it in the segment as of now. The design reeks of Aprilia, right from those beautiful character lines to the well finished bodywork to the sporty stickers. Elements such as the footpegs (when closed) or the brake oil reservoir are neatly nestled within the body panel which gives this Aprilia a clean look. The scooter comes with two paint options – black and white – while the graphics remain identical on both the models. 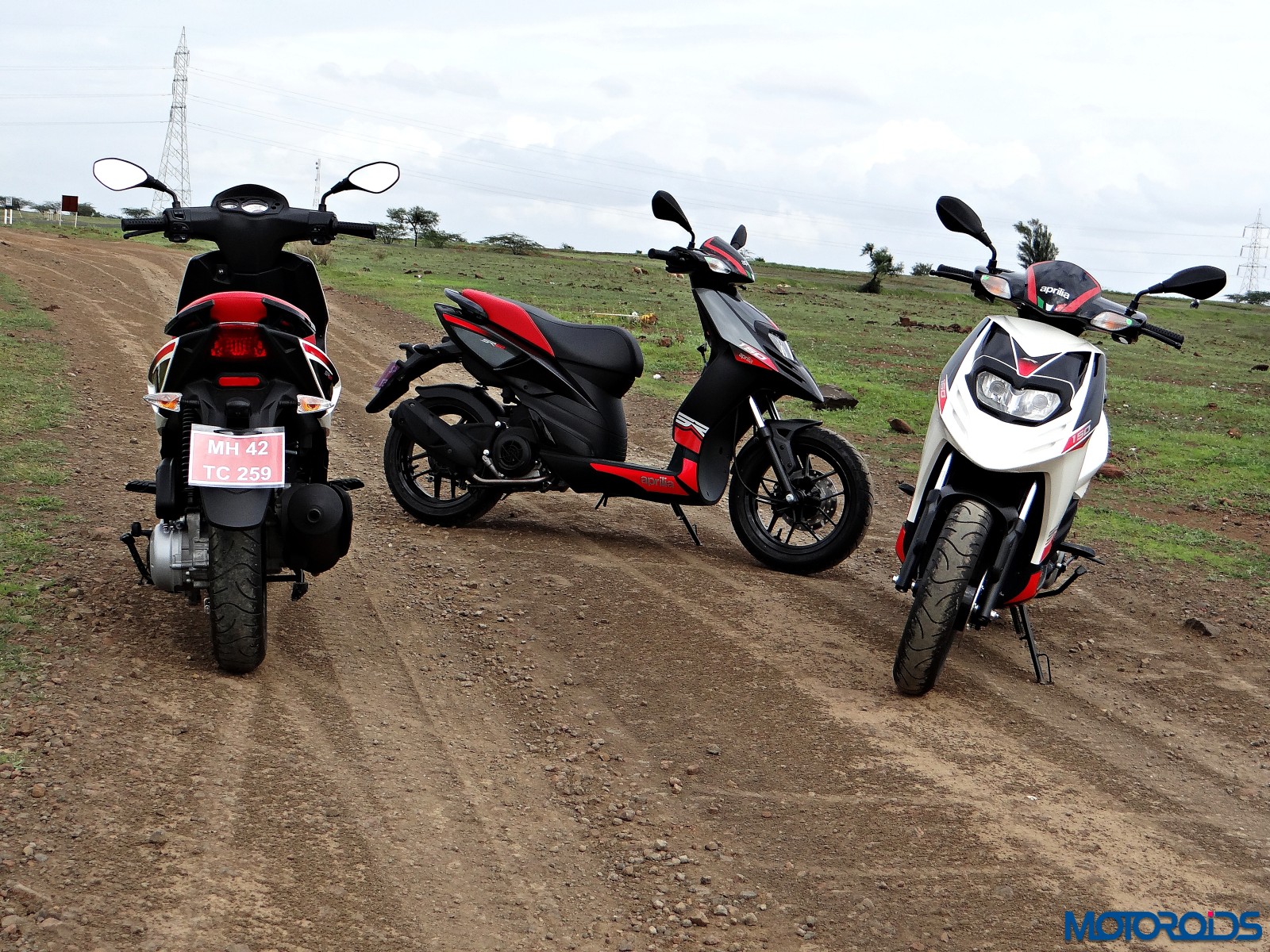 One of the highlights upfront is the apron mounted twin-pod headlight which is currently only available on the SR 150. The left pod works as the low beam while the right unit delivers the high beam. We could not test the illumination capabilities of the headlights, as rode the scooter only during the day. There is also a pilot lamp which, in my honest opinion, could have been more prominent. The rear view mirrors are identical to the bigger Aprilia motorcycles. The place where you usually see the headlight on a scooter get Aprilia branding with Italian flag colours surrounding it. The little fairing is flanked by handle-bar mounted turn-indicators. The beaky apron neatly overlaps the front fender, giving the scooter a minimalist design while the tall 10-spoke, 14-inch wheels hint at the SR150’sporty handling character. 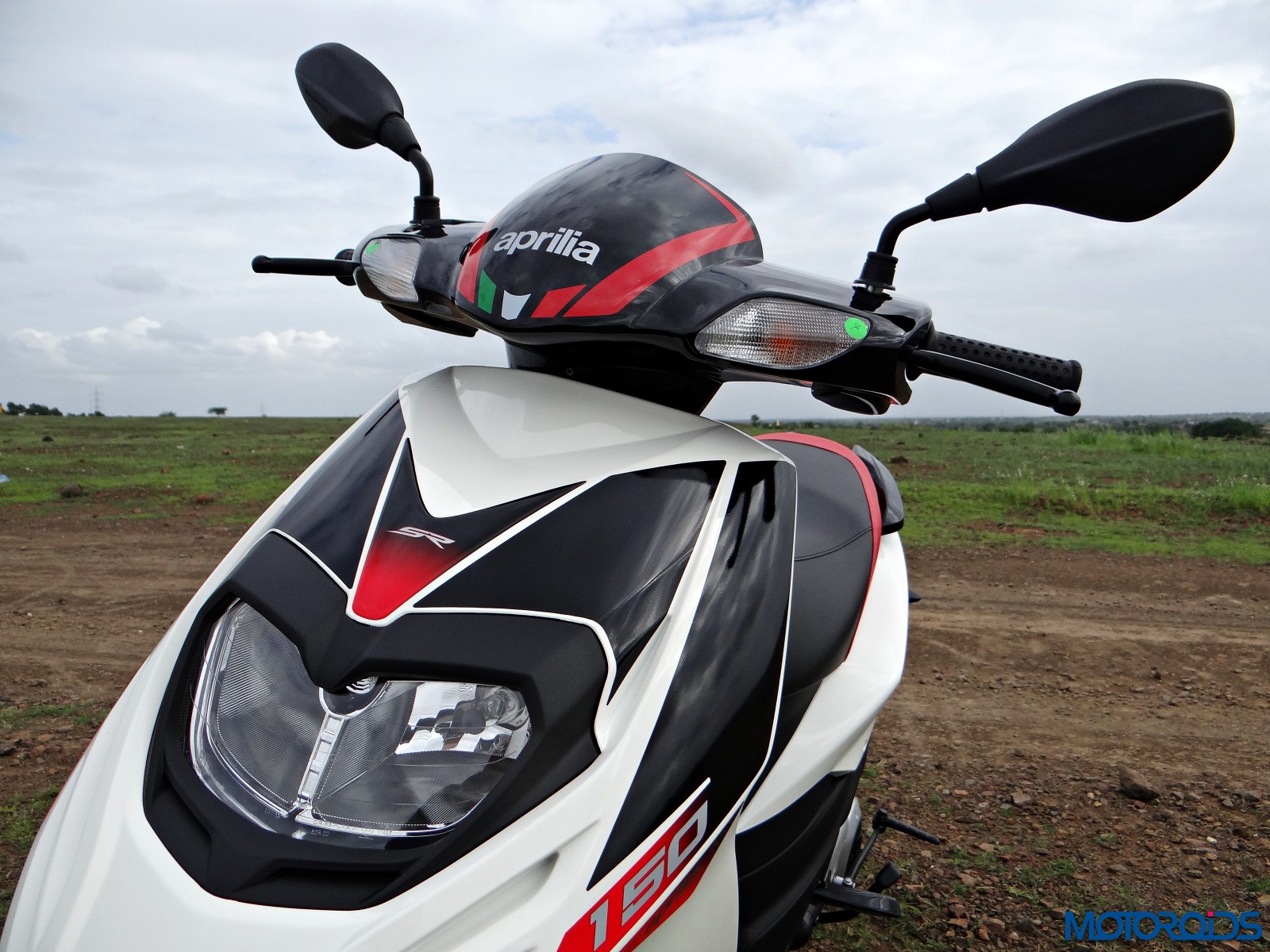 The dual tone seat is an absolute eye-candy. The seat mounted key-hole, which gives access to the storage, makes operation easy and lets you access the space with one hand. While the underseat storage isn’t groundbreaking, you can use it to store a few items. It isn’t, however, large enough to store a full face helmet. Unlike some of the new scooters, the test unit of the SR 150 did not get an underseat charging point but the feature is expected to be available as an optional accessory.

The dual-tone side panel is a mix of sharp lines and creases along with gloss and matte finish while the up swept, all black exhaust pipe with black heat shield provides a sporty appeal to the scooter. The small body panel also reveals various components such as the rear shock absorber that occupies the left side of the rear along with the engine. The big motorcycle like pillion grab bar, which appears to be a split unit, is actually a single piece hardware. The grab bar neatly surrounds the upper part of the tail light. The tail light itself is a conventional unit but the rear blinkers and registration plate illuminator units are identical to the bigger Aprilia motorcycles which is a neat addition. 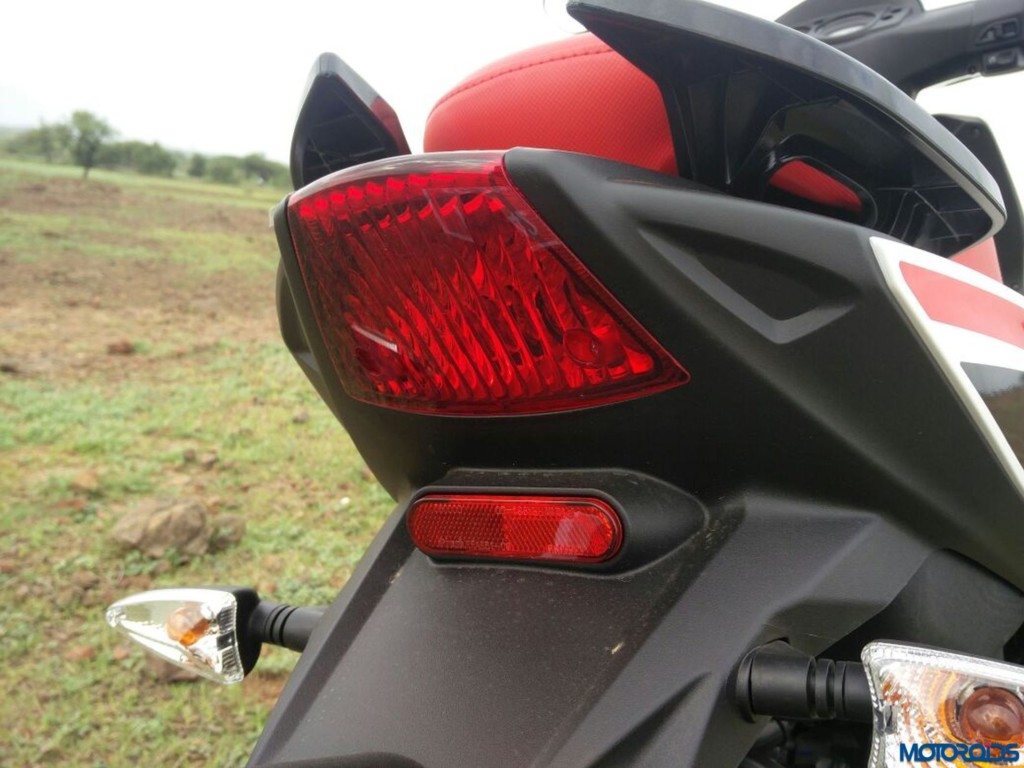 To sum up the design part, the Aprilia SR 150 gets a well built body and remarkable fit and finish. The body panels, paint quality and switchgear are some of the finest in the scooter segment. If I had to point out a few flaws, I would probably say that the instrument cluster could’ve had a tachometer and the ORVMs could have been slightly wider for a wider view. The headlight could’ve been sharper in design too which would have gone well with the overall design while the tail light could have been a LED unit. But I’m really nitpicking here and the Aprilia scores solid in terms of design and quality. 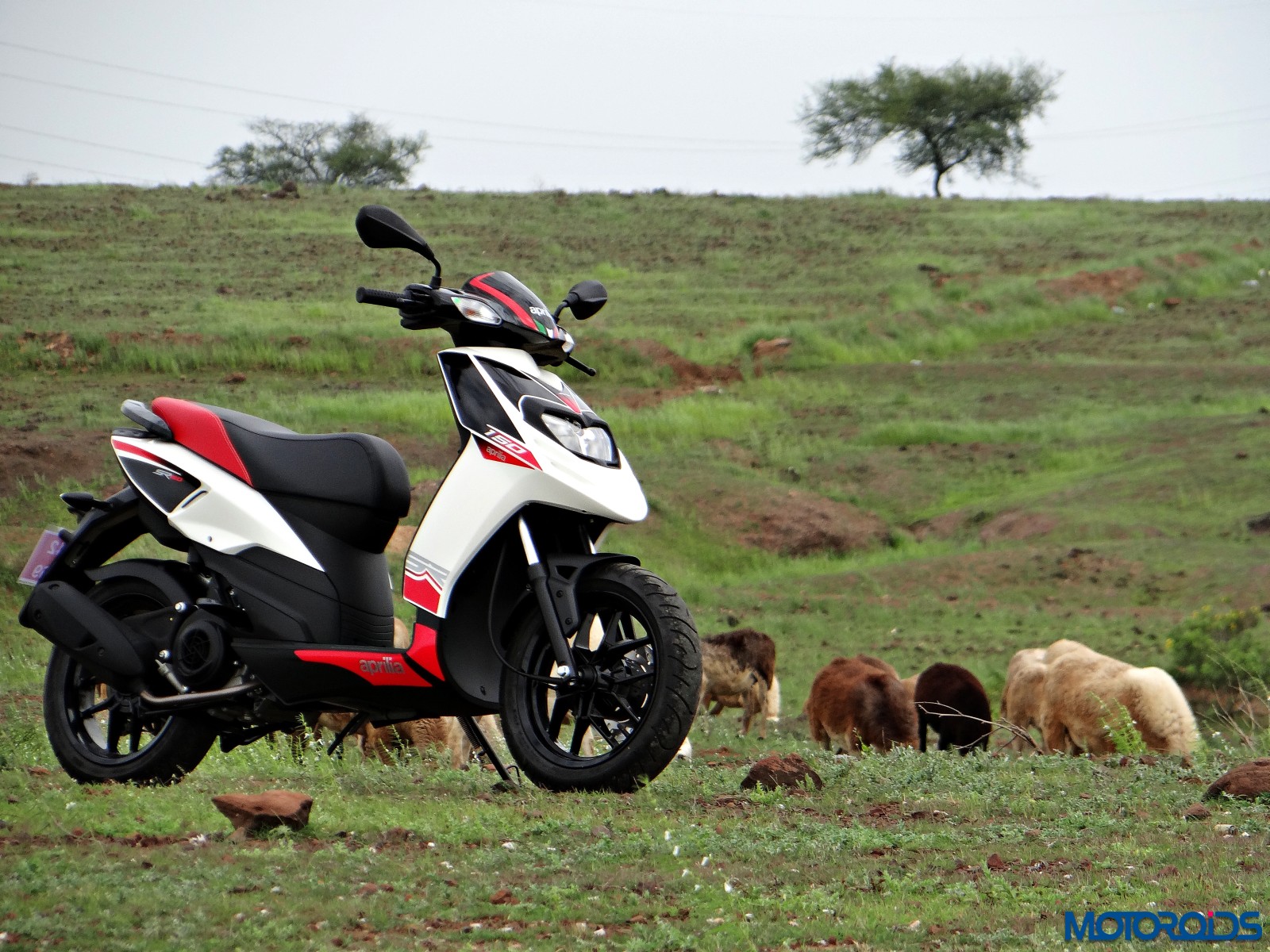 Meet the Aprilia SR 150 in detail: 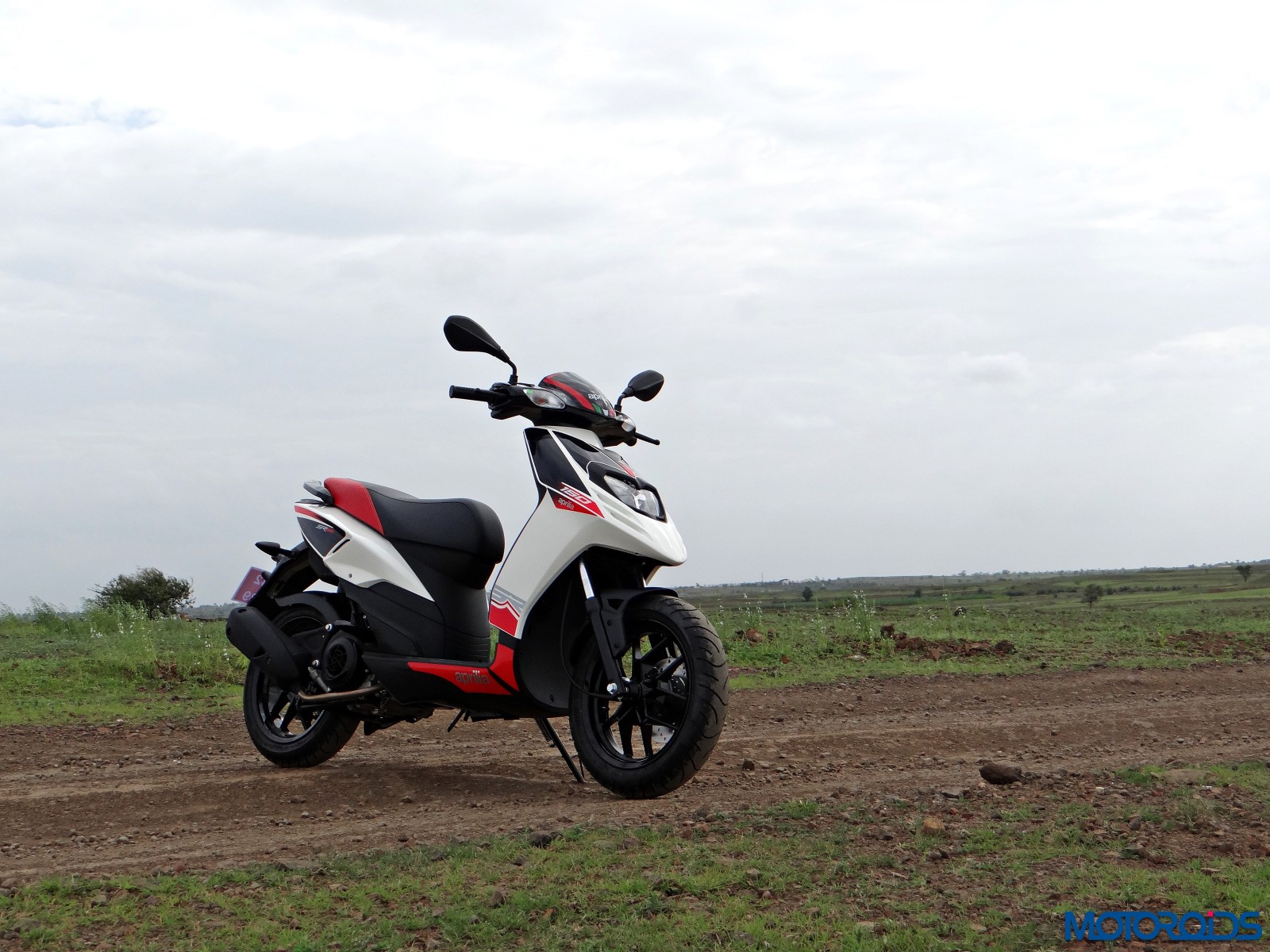 While the Vespa offers a retro styled ride, this one here, from the house of Piaggio is aimed to woo the younger audience who want a sporty scooter 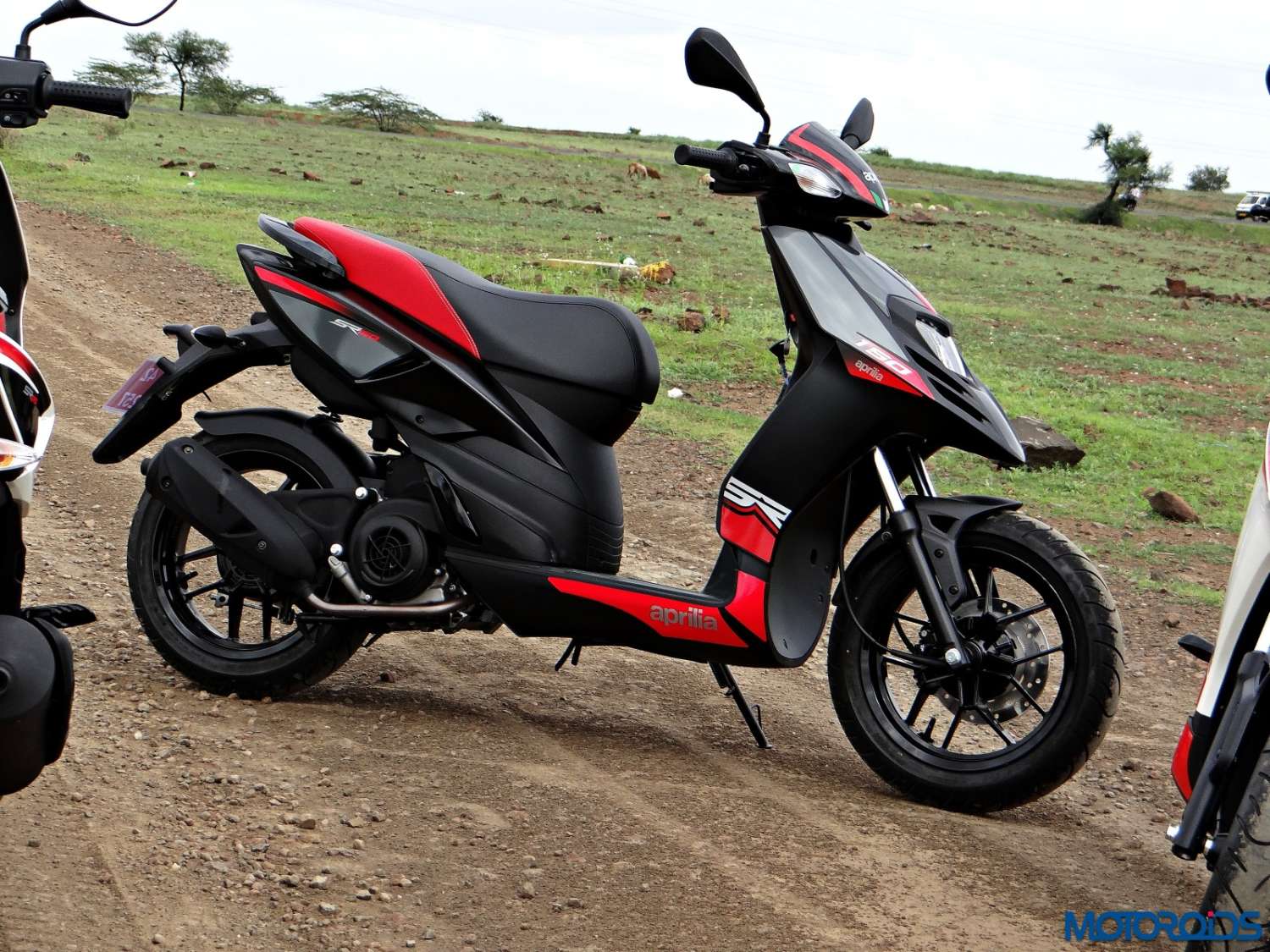 Honestly, I would buy the black variant any day. I mean just look at that thing

The twin-pod headlight should be really efficient after dark. We still have to test it. The sticker with the SR badge is thicker than the rest of the graphics and almost gives a tank-pad like feel

Those lightweighht 10-spoke 14-inch wheels strapped with Vee rubber look awesome. The suspension is set on the stiffer side which aids the scooter’s handling characteristics 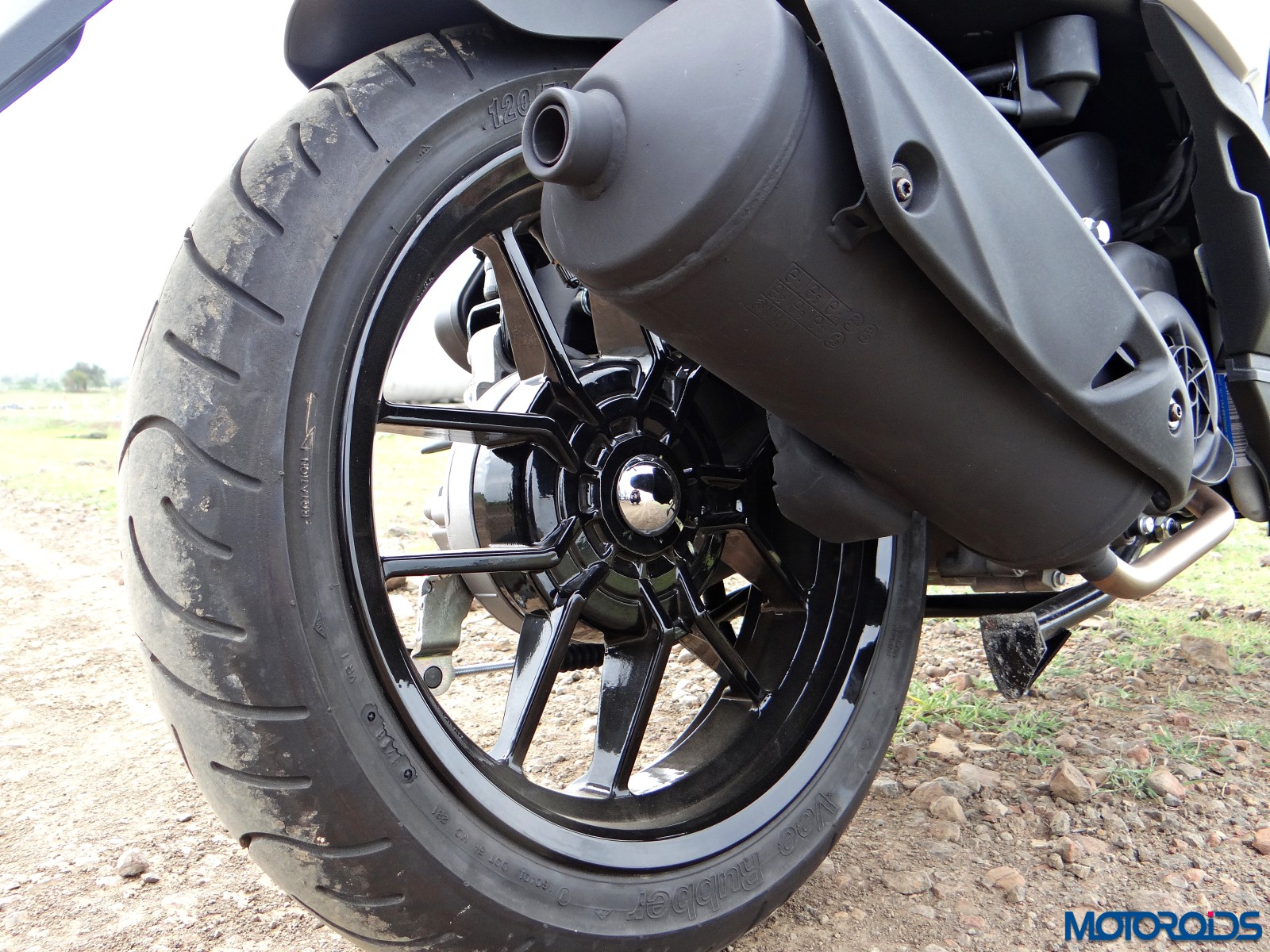 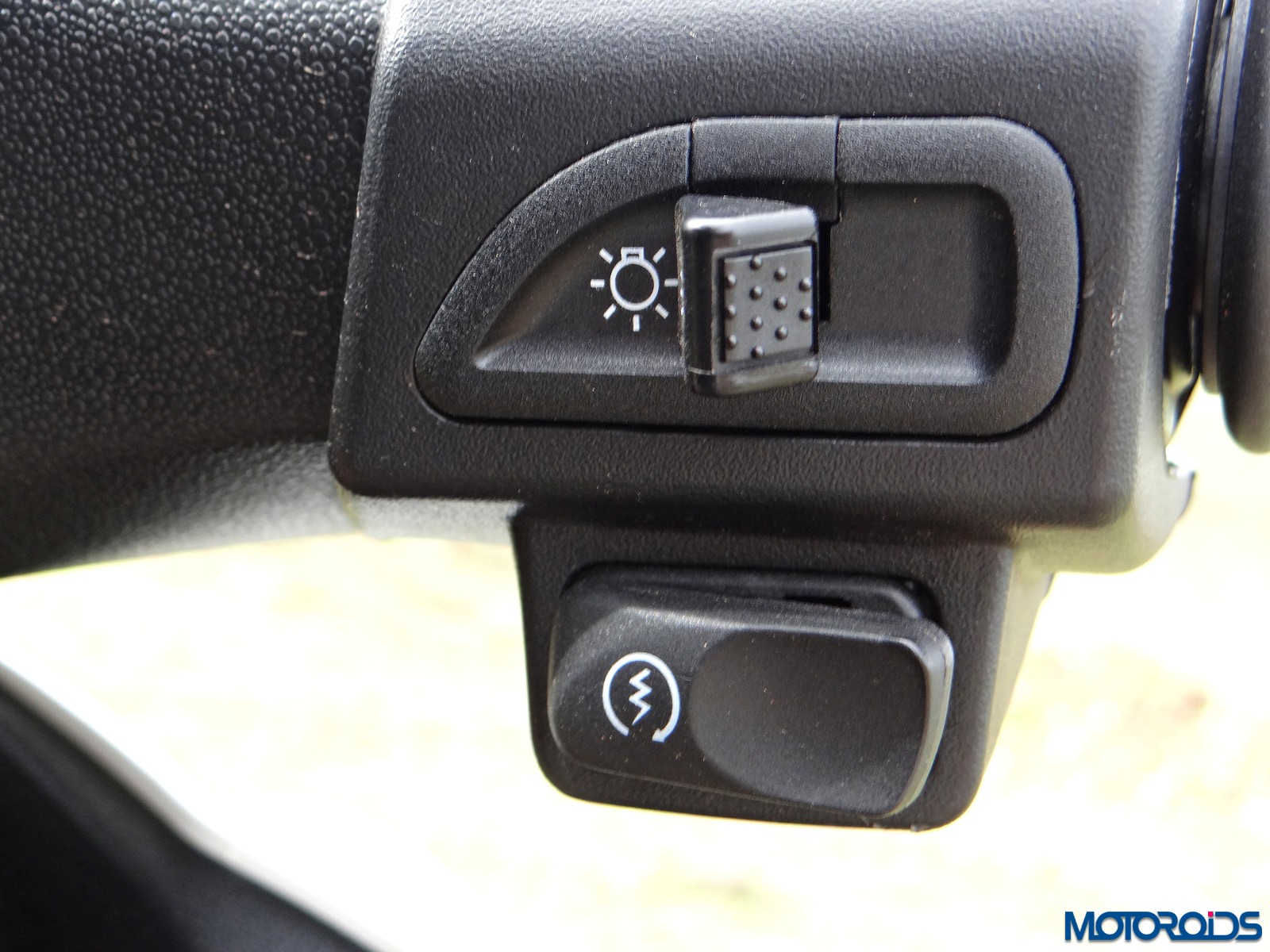 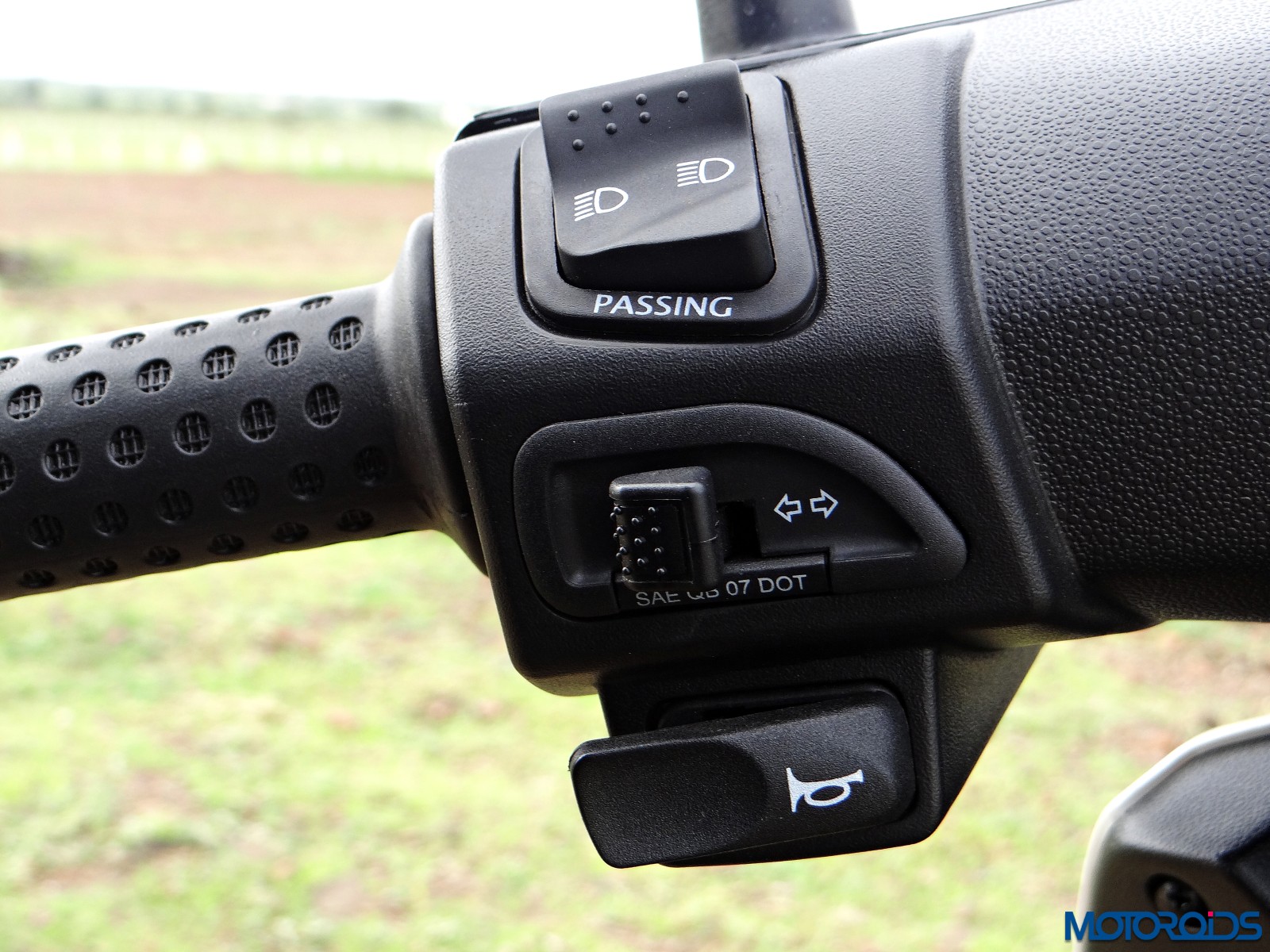 The switchgear quality is commendable 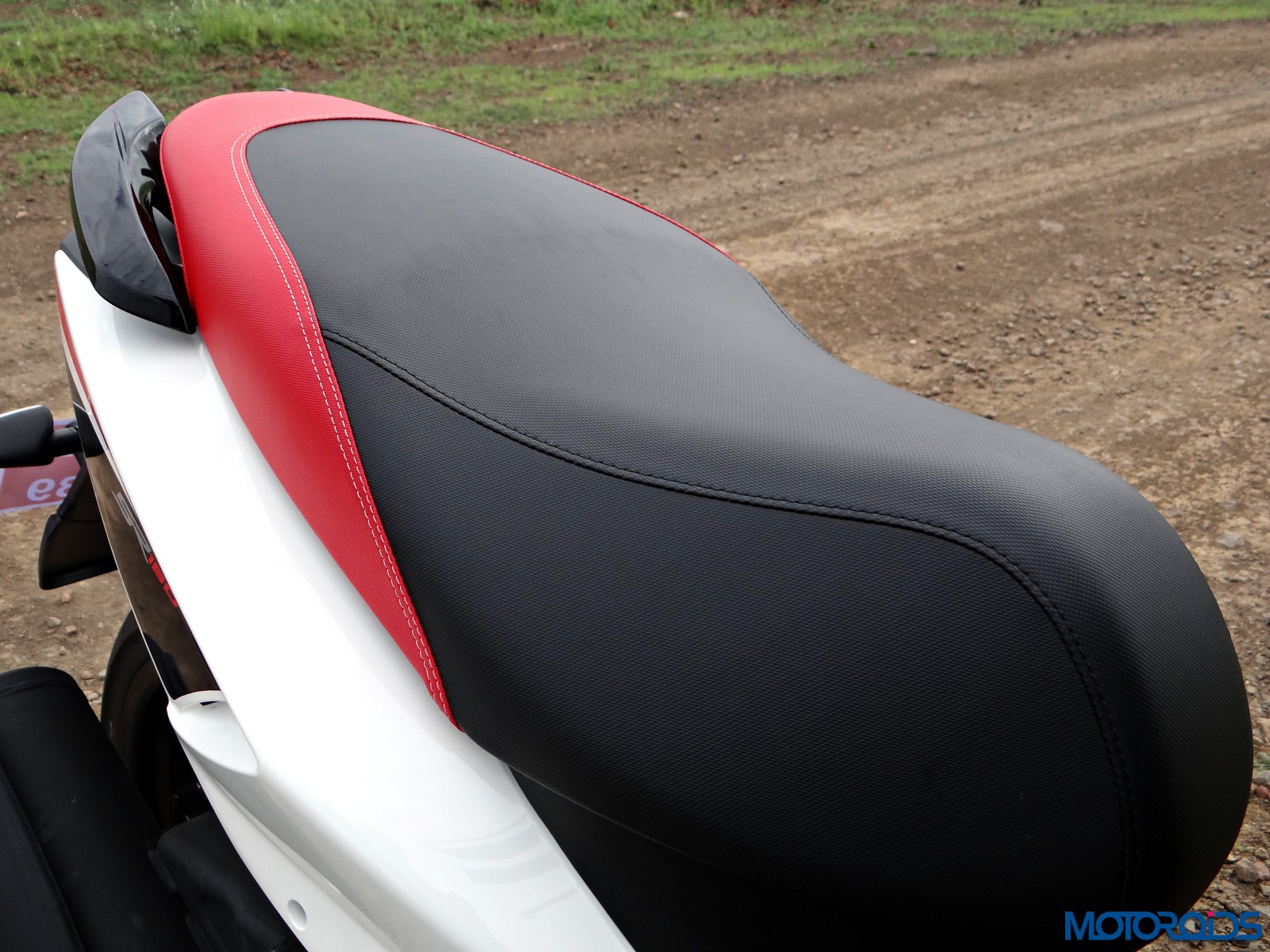 The dual tone seat is a treat to the eyes. Aprilia has selected the right colours 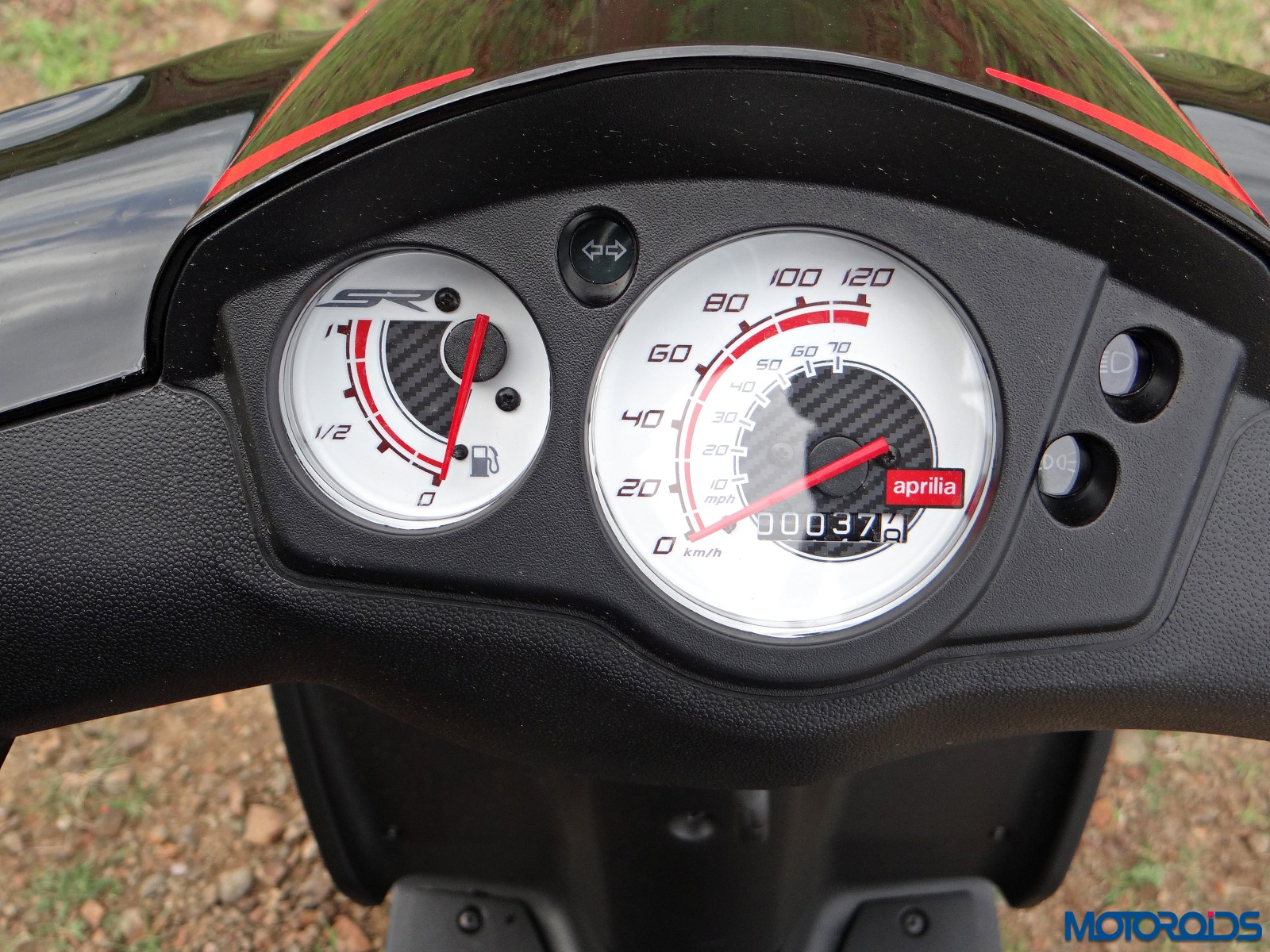 That carbon-fibre texture underlines the performance oriented character of the scoot. The set-up is all analogue, simplistic and devoid of any digital elements 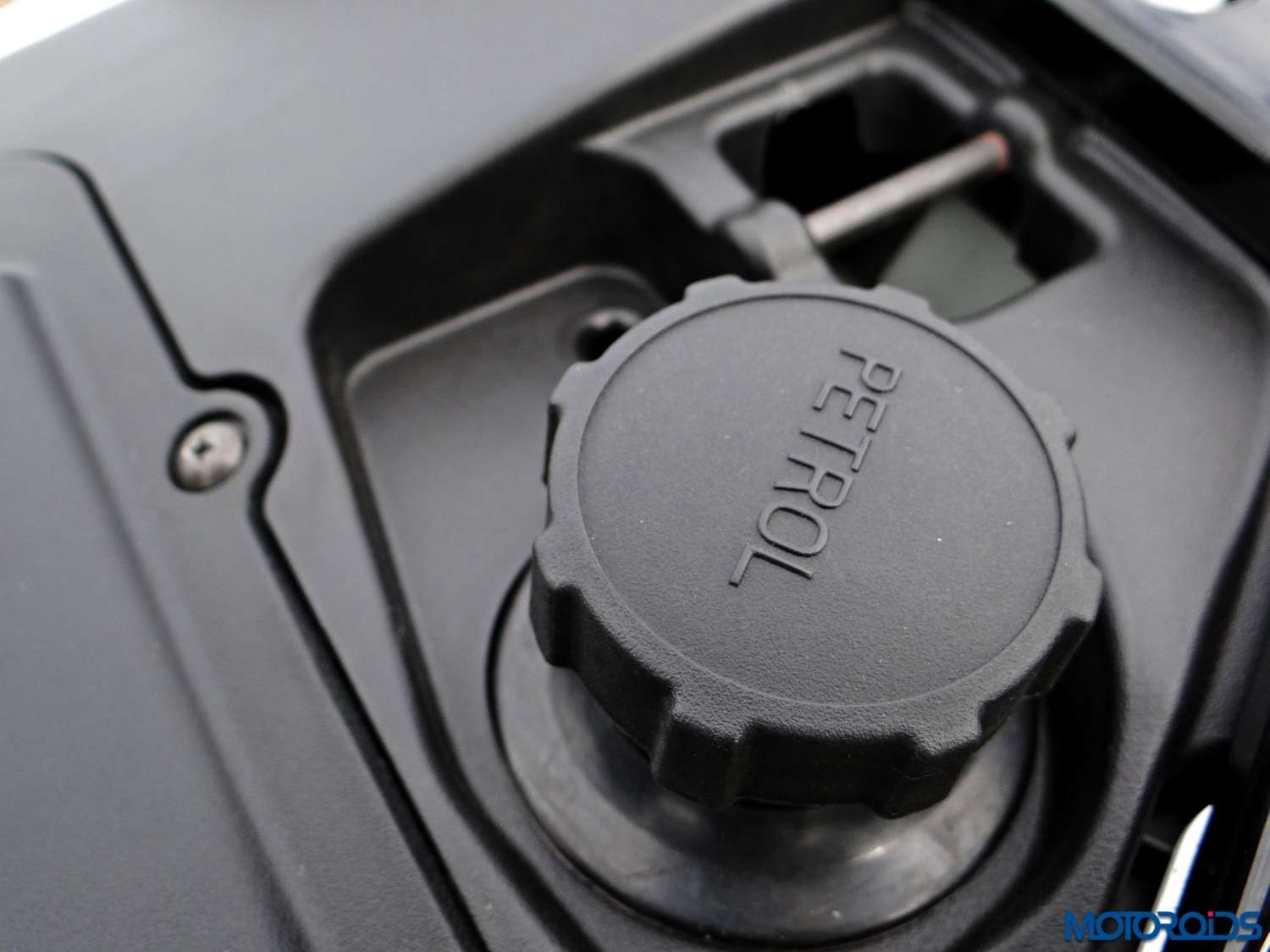 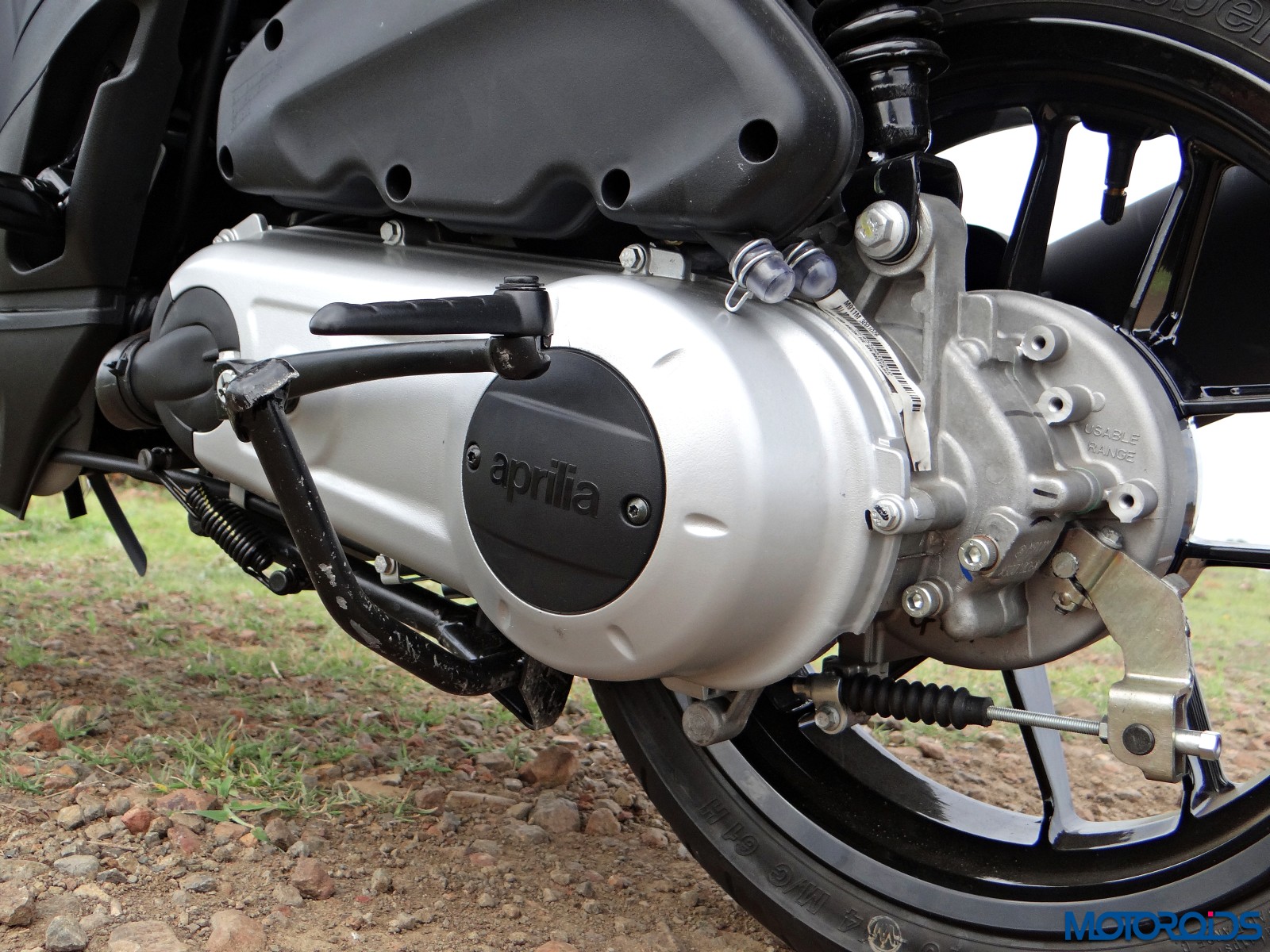 The motor is quite potent but it lacks that initial punch. That being said, you can eaily cruise on 70-80 kph or even venture into three digit speeds 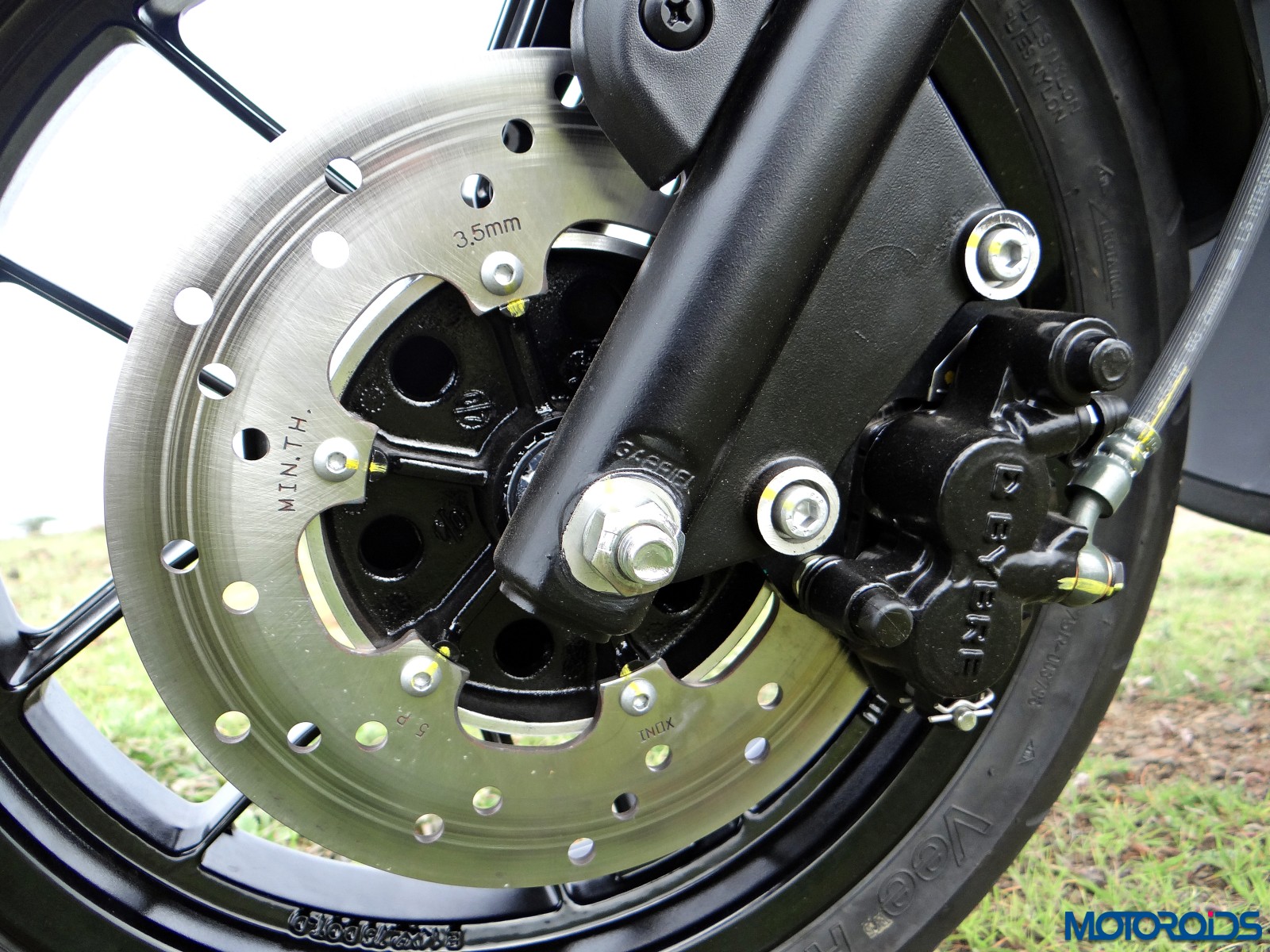 Those brakes can shed speed faster than you anticipate and you end up stopping much before your instincts tell you. ABS would be a good addition to the mix.

So we are awestruck by the design, but what about the performance? 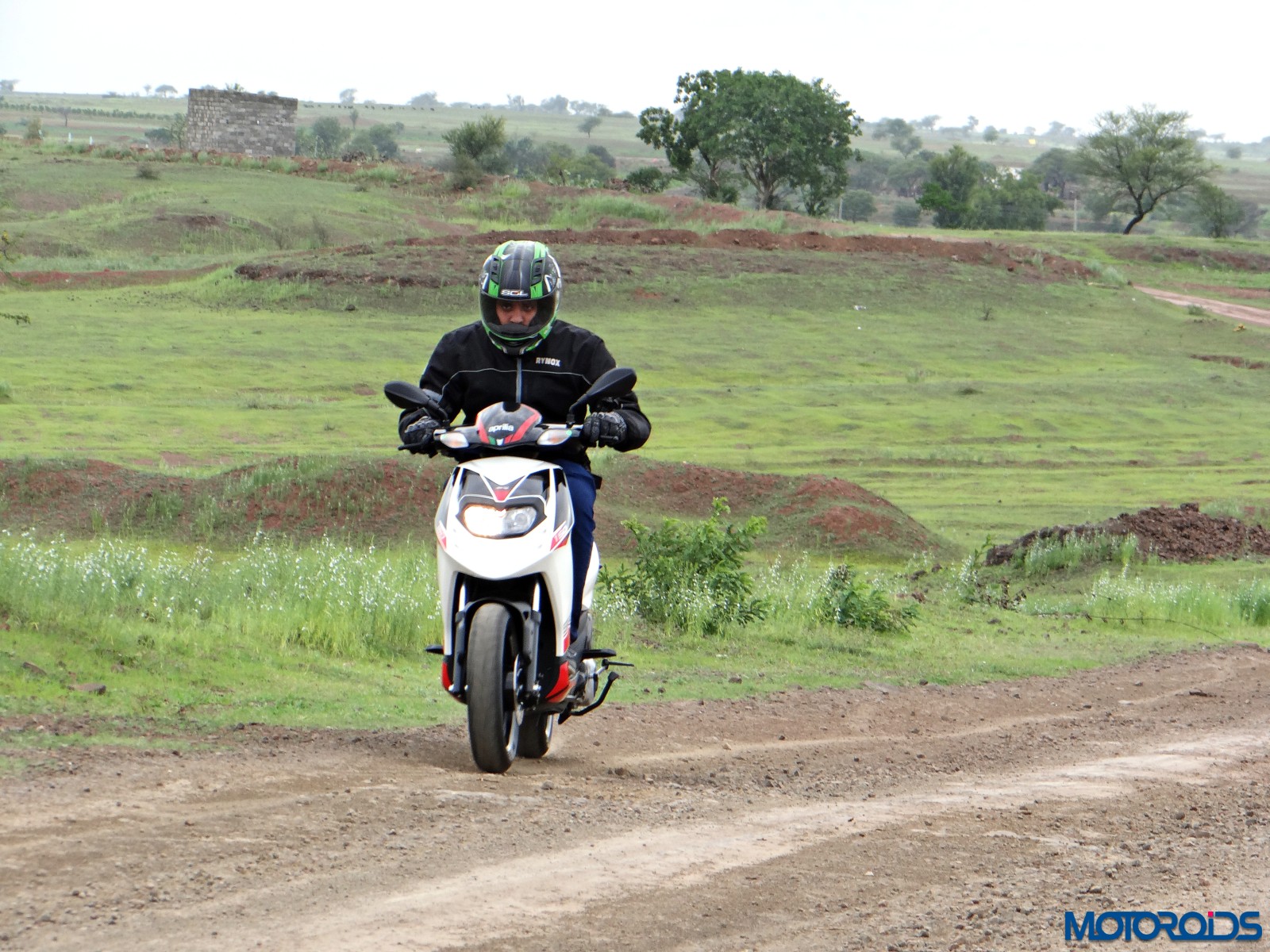 The Aprilia SR 150 draws power from a 154.4cc four-stroke air-cooled carburetor engine that duty on the Vespa 150 SXL and VXL as well. While Piaggio stayed tight lipped about the exact changes, the folks claimed that the motor has been tweaked and it now gets an improved gearbox and we have to say that this one definitely feels peppier. That being said, the numbers aren’t any different than the Vespa 150. 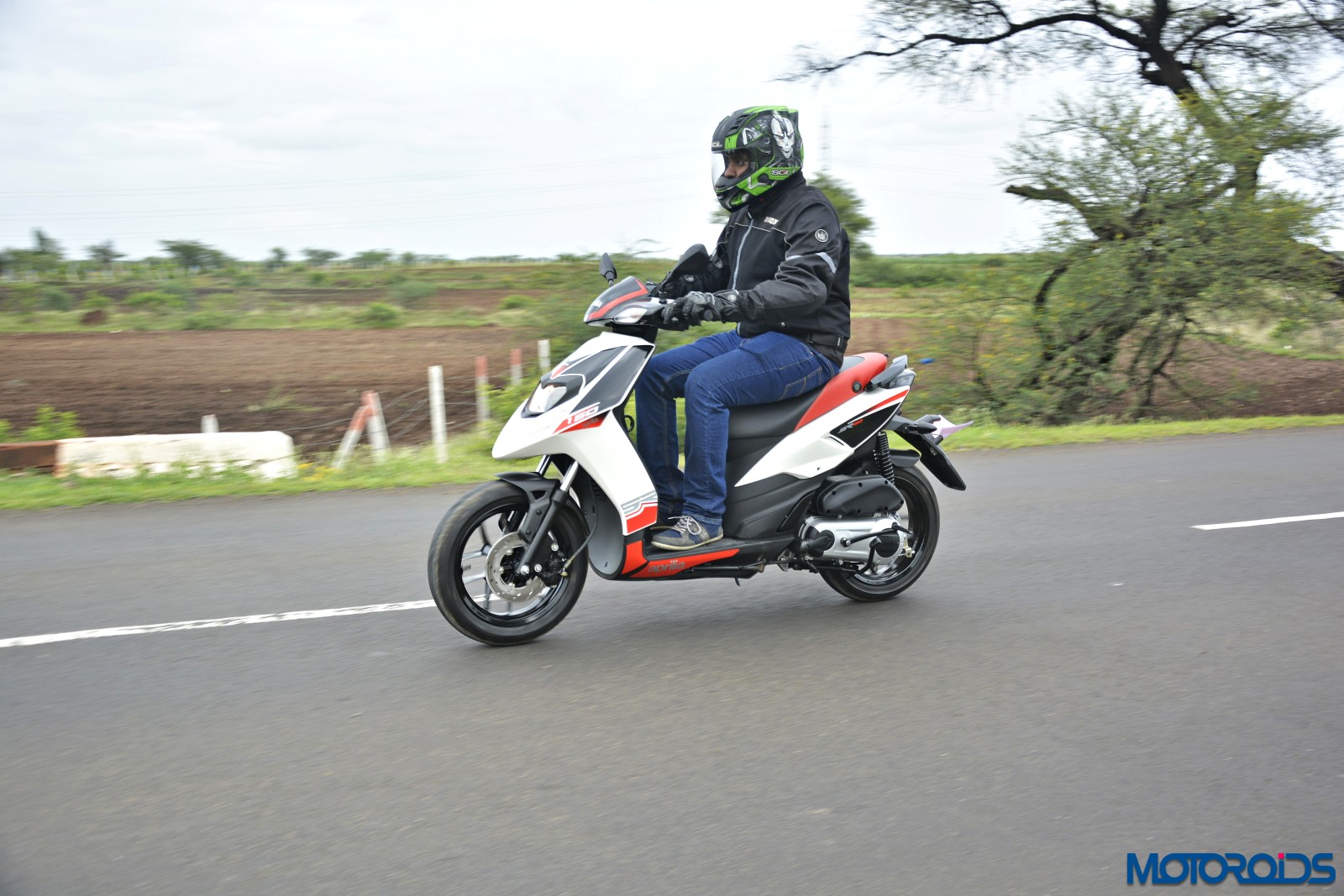 The motor churns out 10.4 hp at 7000 rpm and 11.4 Nm of torque at 5,500 rpm. The power delivery is linear but there isn’t that initial punch that one would like. The bike accelerates swiftly past the 70 kph mark, even till 80, although going into three figures requires crouching. Some of the fellow journalists who have better power to weight ratio than me have claimed to reach 110-120 kph on the speedometer. The engine feels stress free and long legged and can easily hold 70-80 kph without breaking a sweat. A slightly bothersome aspect was the vibrations at idle which were more than… um, ideal. The exhaust note is slightly throaty which feels nice.

The above figures are complimented with an equally potent braking system. Shedding speed was ridiculously easy thanks to a 220mm ventilated disc brake upfront with twin-piston calliper from Bybre and a 240mm drum at the rear. ABS is not available as an option but we are sure that would change once the new norms come into effect.

Overall, the performance from the scooter would leave a wide grin on your face, with that lack of a solid punch at very beginning being the only downside. That being said, the ease with which the SR 150 can hold highway speeds is remarkable and you would have a fun time covering your daily distance in much lesser time. 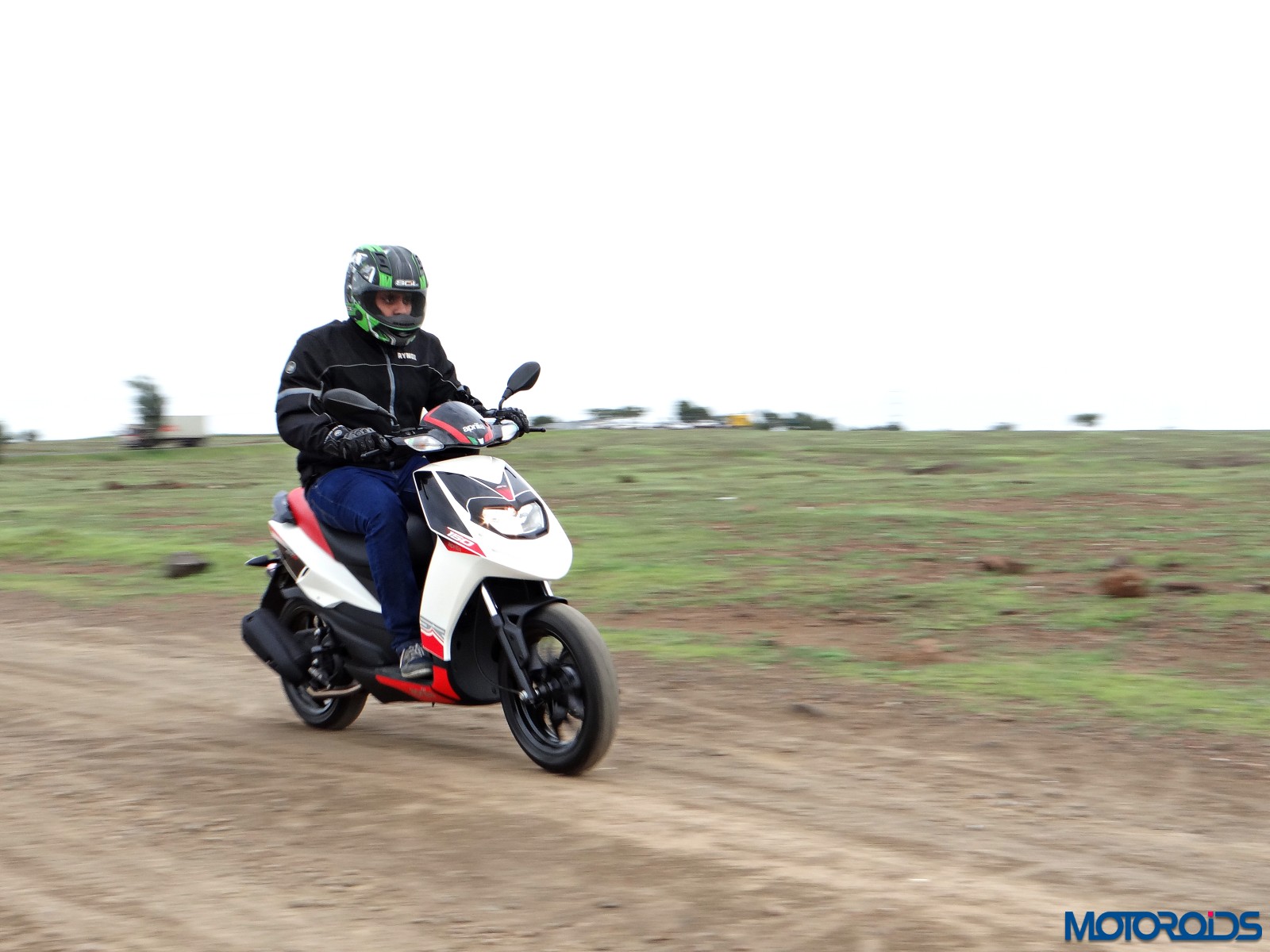 The 32 mm hydraulic telescopic fork upfront and hydraulic shock absorber at the rear are set on the stiffer side which matches the SR 150’s character perfectly. The stiffer suspension makes handling fun, with easy turn-ins which is further complemented by the excellent grip from the sticky, Made in Thailand, tubeless 120/70 – 14 Vee Rubber tires on both ends. The fun handling can also be attributed to the relatively large and segment first 14-inch wheels. Those 14-inch wheels also aided straight line stability and despite the windy day, the SR 150 was steady at 80-90 kph mark.

While the suspension is slightly on the stiffer side, it does not affect the comfort by much. The place where we tested the SR 150 had a well-laid tarmac but we took it off the road to test its absorption qualities and came back pretty satisfied. 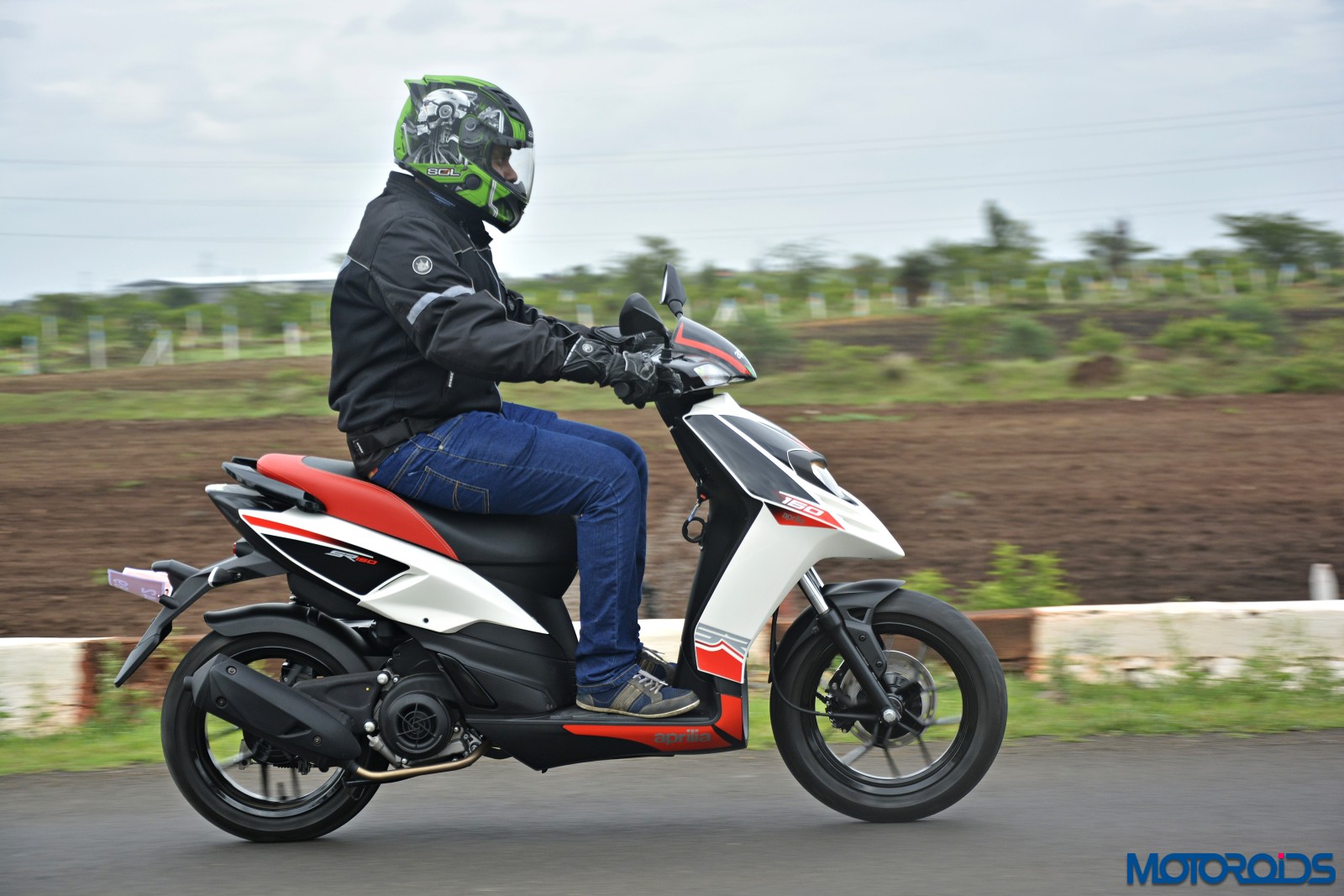 On the downside, the seat may not provide sufficient space for pillion. 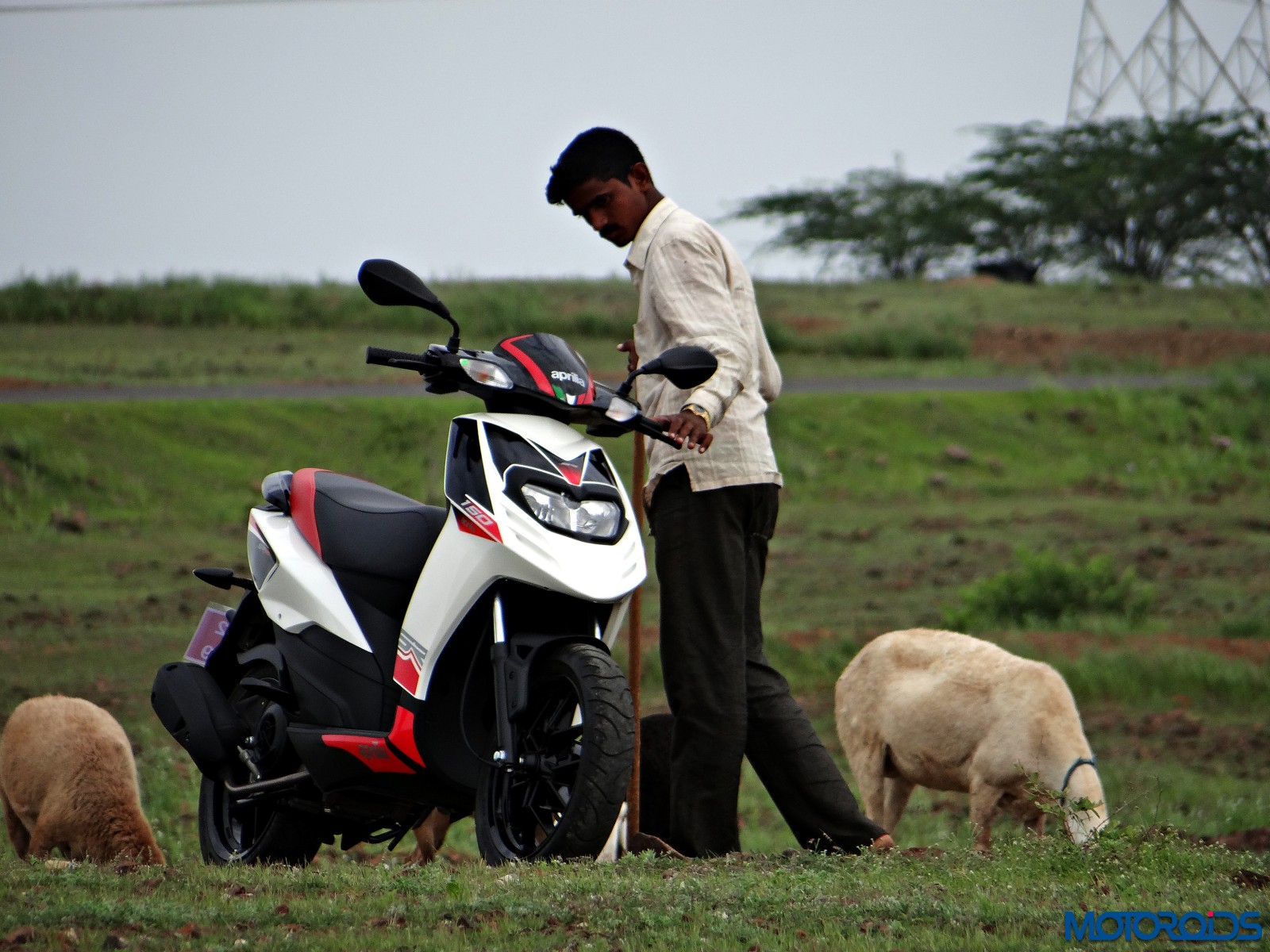 The Indian two-wheeler market is evolving and the products such as the Aprilia SR 150 are the evidence of how the scooter landscape in changing rapidly in the country. The build quality of the SR 150 is praiseworthy with equally good performance. The new Aprilia scoot also shines in terms of styling and handles like no other other scooter out there. It’s quite practical too with a big fuel tank and reasonable storage. The seat isn’t the largest we have seen, but this one isn’t targeted at the family guy who’d be riding with his wife in tow. 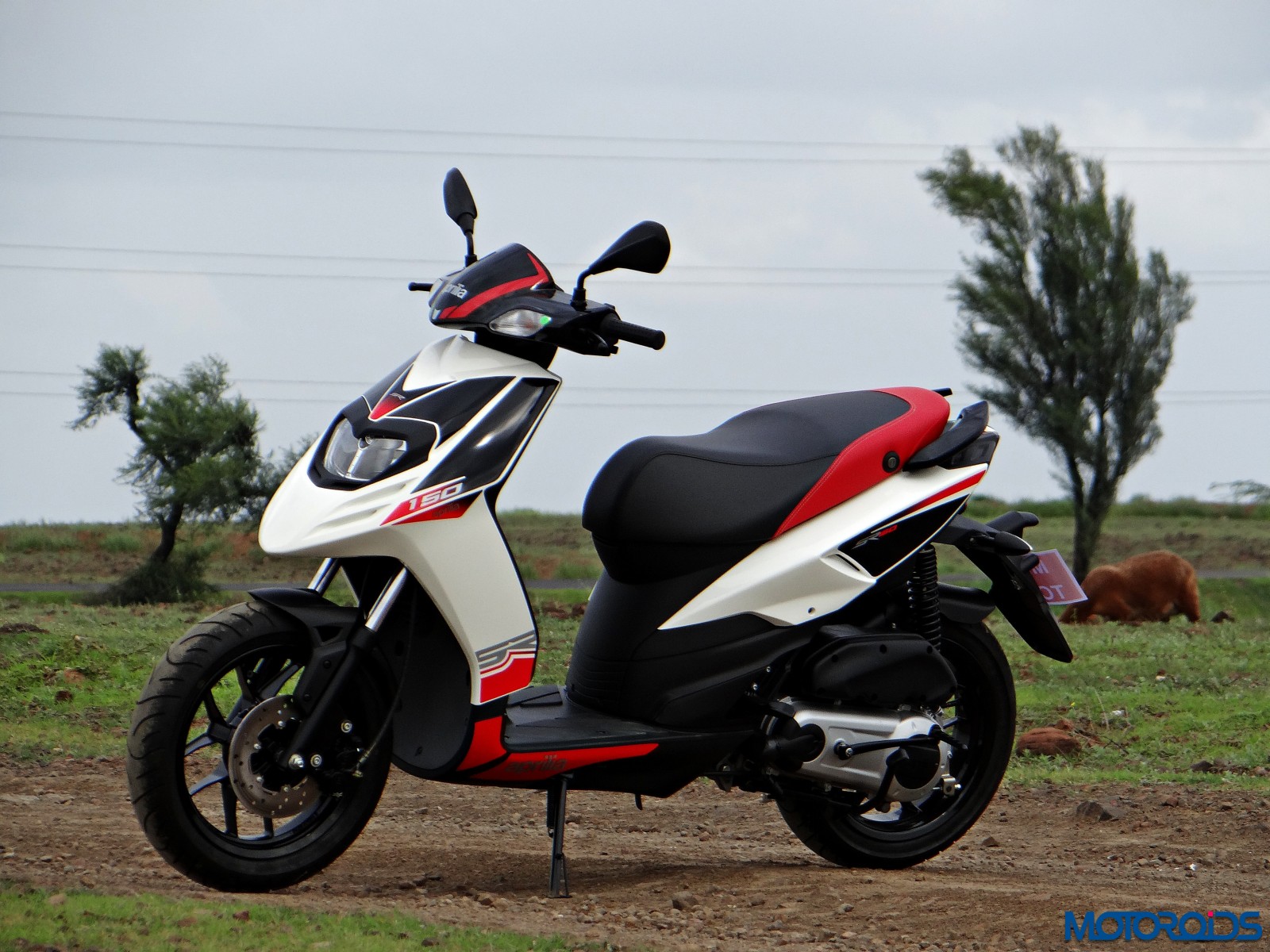 It’s a scooter for enthusiasts and you will have a seriously fun time astride its saddle. At INR 65,000 (ex-showroom) the Aprilia SR 150 is worth every penny of its price for the discerning buyer. There’s nothing that the SR150 does wrong, and it might just script a great success story for the brand in the country.

Here are the technical specifications followed by the detailed image gallery of the new Aprilia SR 150. Do let us know your views about the new scooter and the review through the comments section below. 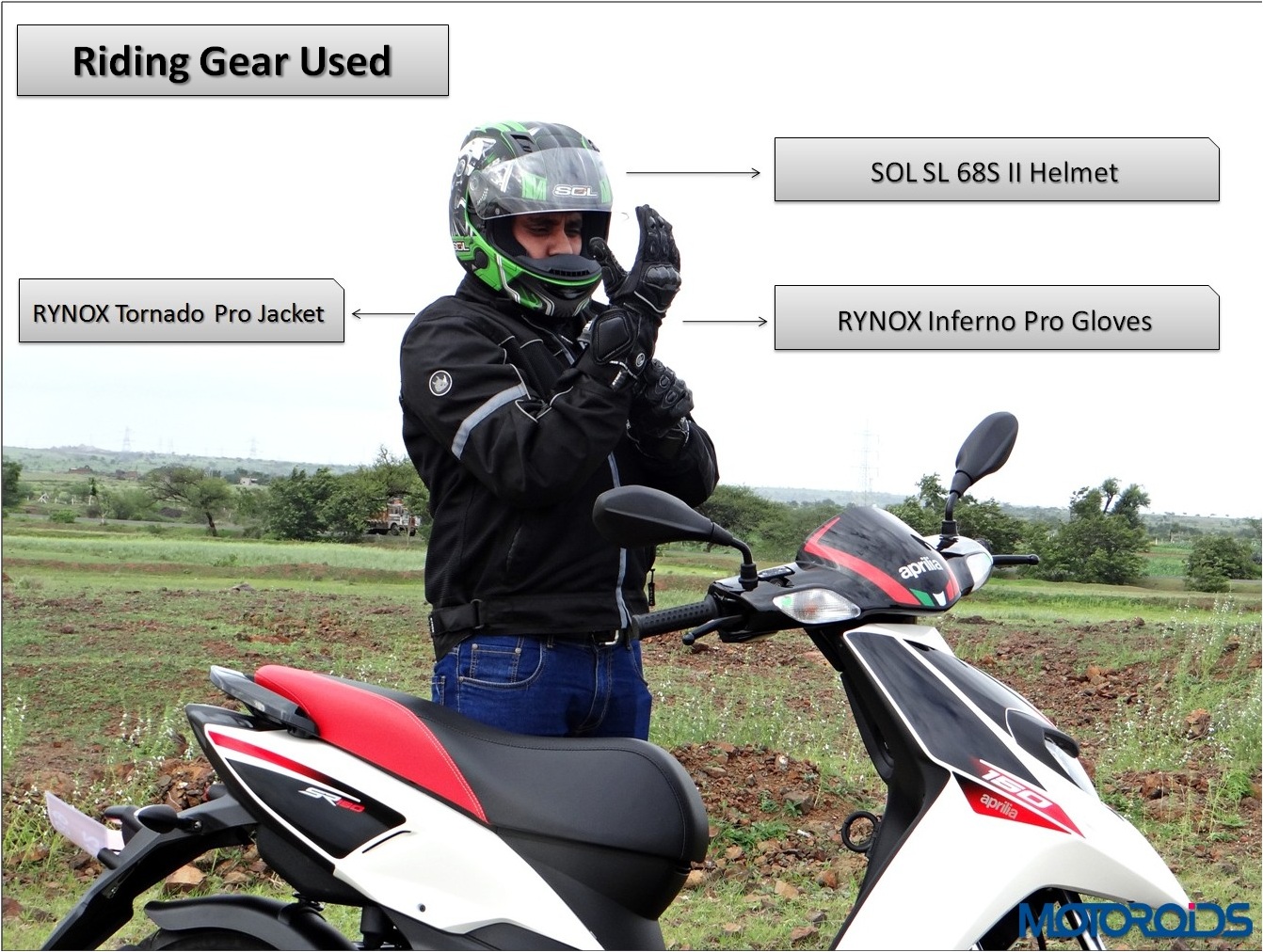