Aprilia introduced the SR125 scooter at the 2018 Auto Expo and launched it soon thereafter. While some wondered whether they should trade off the extra power and performance for the difference of a meagre RS 5000 over the bigger SR150, others welcomed the move. So does the SR125 need to exist? We try and find the answer after riding the scooter in Mumbai for a day

Well, the SR150 has been doing rather well for the kind of price it commands. It has sold more than 30,000 units since it was first introduced. The parent company, Piaggio also owns Vespa, another premium brand that sells only 30% of its scooters in the 150cc segment, which means 70% of the sales come from its various 125cc offerings. Get the picture? If the pattern can be replicated with Aprilia, the Italian bike maker may be looking at a sales volume of over 100,000 units with the introduction of the 125cc variant. 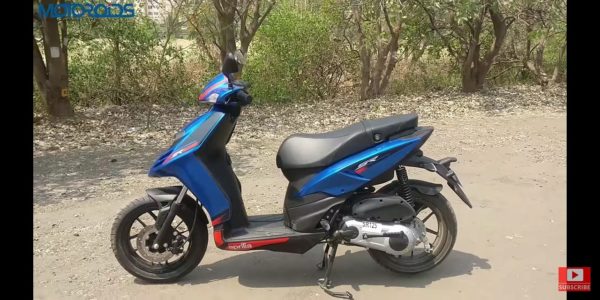 Aprilia has also received very convincing feedback from its sales points where the customers are turning back after stepping into the showroom as a 150cc scooter is too much for them. At a lower, more accessible entry point, offering more fuel efficiency and while still delivering comparable performance and almost similar handling, the Aprilia SR125cc does make for a very well thought out strategy. If successful, it’ll increase the brand’s sales and profits multi-fold. It’s also more accessible to a wider range of members within the family, is more efficient and more practical, which, like it or not, is going to be a deciding factor in the Indian context when a buyer chooses a scooter.

The biggest change, obviously, is the engine. So talking of specs and numbers, this one gets a 124.7cc single cylinder engine with 9.5hp of power and 9.9 Nm of toque. It’s about half an hp less in terms of power and 1Nm less in terms of torque – not a very big difference as you’ll notice. It sits on the same chassis-suspension-brakes setup and thus offers the same fantastic handling and poise as its bigger sibling. 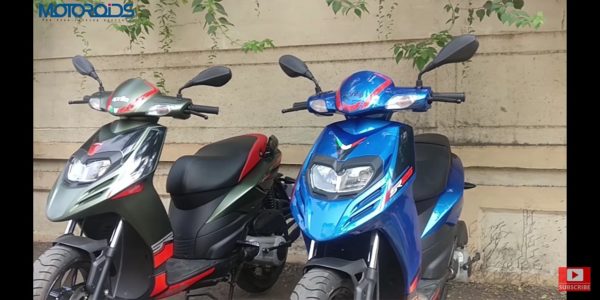 Visually, the SR125 is differentiated from its bigger 150cc sibling through its exclusive Blue and silver colour options. The Sr150 gets its own green, white and black shades. Also, the seat on this one is longer and finished in a single tone of black unlike the red-black, two-tone seat of the SR150. This one also comes with a grab belt over the seat for the pillion and a single piece raised grab rail at the rear which is more practical. Needless to say, the graphics on the two scooters are also differentiated.

Those changes apart, however, there’s no difference between the two scooters in terms of the platform they ride on, and the panels that cover them, and they are both equally well built with class leading handling, braking and a distinct sporty feel to them.

Aprilia SR125 – Has the performance suffered with capacity reduction?

They say there’s no replacement for displacement, and there sure is a minor difference in performance. However, the SR125 revs higher than the bigger SR150 to somewhat make for the lack of ceecee-s and succeeds too. The peak power is produces at about 500 revs higher, at 7250 rpm as compared to the SR150, while the peak torque is produced at 1250 revs higher at 6250. That’s how Aprilia have managed to cover the displacement deficit and the SR125 definitely feels like a step above its rivals. It does a 120km/h top whack on the speedo – which by the way is the maximum marked speed on the console and should translate into a true speed of 105+ km/h, which is fantastic for a 125cc scooter. 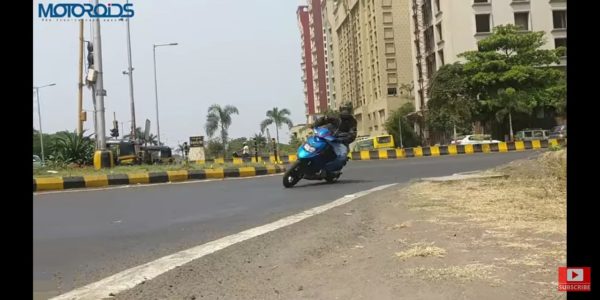 There could have been a bit more initial pep, but the scooter is strong in its mid revs and does pretty well in the higher revs as well. It’s a refined motor with no vibes and the good part is that the scooter feels fabulously stable and planted even at the top of its limit.

So while there is a very minor performance differential, the scooters are still quite similar in terms of performance and someone who has ridden the SR150 wouldn’t feel as though he’s riding something  which is perceptibly low powered.

By all means the SR125 is the stiffest riding scooter in the 125cc segment, and it also is the best handling one. It’s not a cushy, comfortable scooter to ride – it’s meant to be ridden sportily, and it doesn’t lose focus for a single moment on that count. 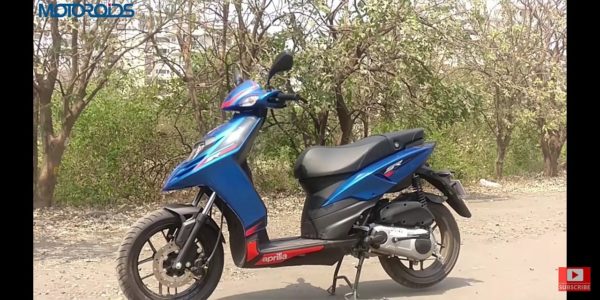 It’s singular focus in on handling, grip and control, and it delivers on that parameter, be it in a straight line, around bends, or under heavy braking. It’s taut, dependable and riding those 14″ wheels feels uncannily solid for a scooter. It doesn’t play second fiddle to the bigger SR1250 and is every bit as exciting to ride.

The Sr125 is claimed to deliver a real world efficiency of 40 kmpl, although the ARAI figure is higher. Practically, the efficiency should vary between 35 and up to 45 kmpl as two extremes depending on how you ride it.

The Sr125 delivers styling, brand image, performance and handling. It isn’t, however, a utilitarian scooter and doesn’t score very highly in terms of features. Heck, it doesn’t even have a trip meter. To cut a long story short, most other scooters in the segment have more features and more under seat storage than this one. Don’t expect the SR125 to check too many boxes in terms of features. This one scores on image and performance though, and no other scooter can match it on that count.

The Sr125 is a very well put together machine. It’s built solid and despite being ridden without relent we didn’t hear a single squeak or signs of resentment from the scooter. The quality of components and the overall solidity of engineering is commendable. The panels have been put together very well, the paint quality is good, the finish is good, and it looks and feels like a premium machine. We could however, have done with better plastics and quality in some places like on the handlebar panel, where the plastic and the quality of switchgear can be improved.

The ergonomics are sporty. The seat is high set and is tapered and sloping towards the front, which isn’t frankly the most reassuring setup. This scooter is not meant for very short riders and the seat itself isn’t the most comfortable. The pillion seat, however, is an improvement over that of the SR150 and along with the reduced price, should broaden this scooter’s appeal among mainstream buyers.

If performance, image and sheer sporty character is what you’re looking for in your scooter, look no further. We’d go to the extent of saying that it’s a genuine, less expensive, more fuel efficient and almost as exciting alternative to the bigger SR150. Want to wear your automotive enthusiasm on your sleeve, while riding a genuinely well engineered product? Go ahead and buy one. It’s a more than fair deal for what it delivers.

However, if you’re going to pinch pennies and compare all the scooters in the segment feature-by-feature – then this one is not for you. It’s a focused machine and only for those who are very clear about the kind of scooter they want to be seen riding. In all honestly, for the brand and the performance it delivers, it’s a very well priced machine.