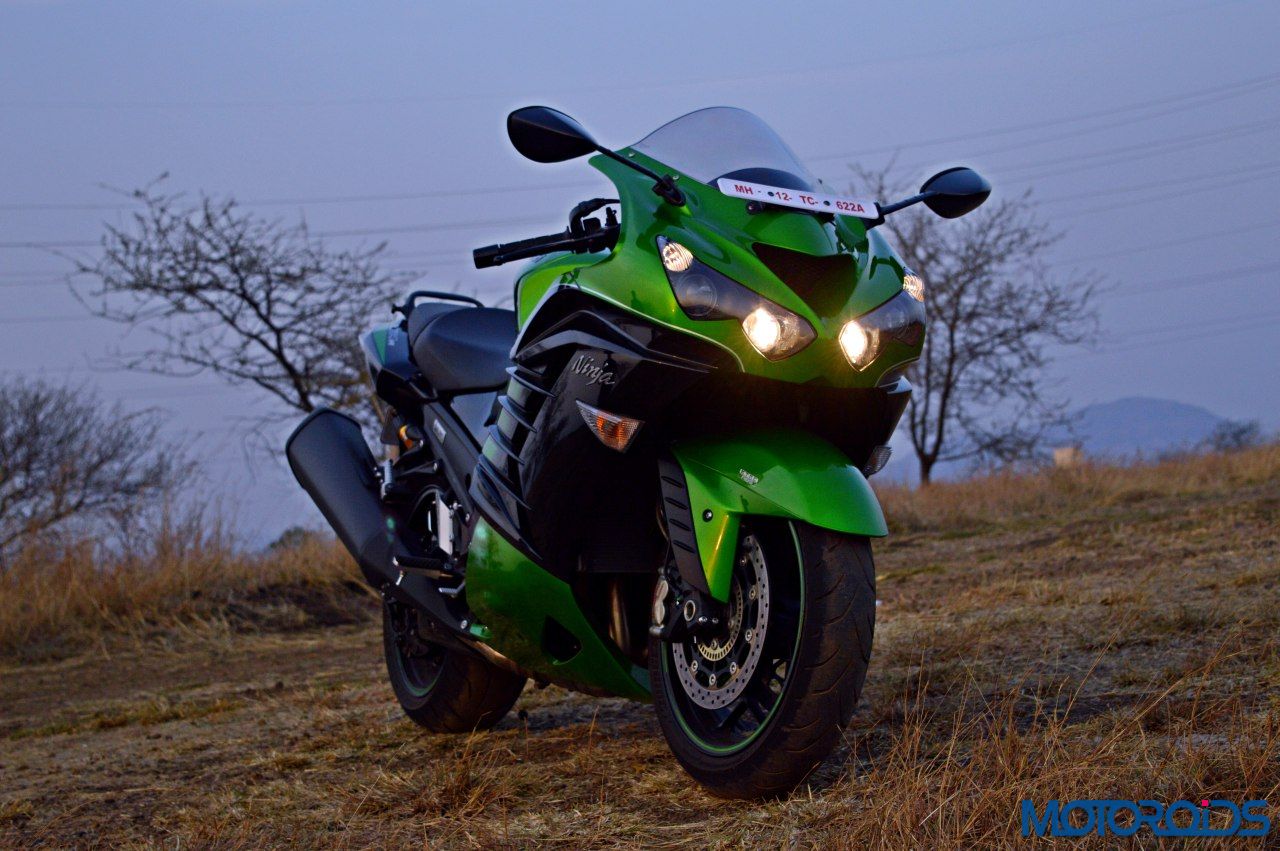 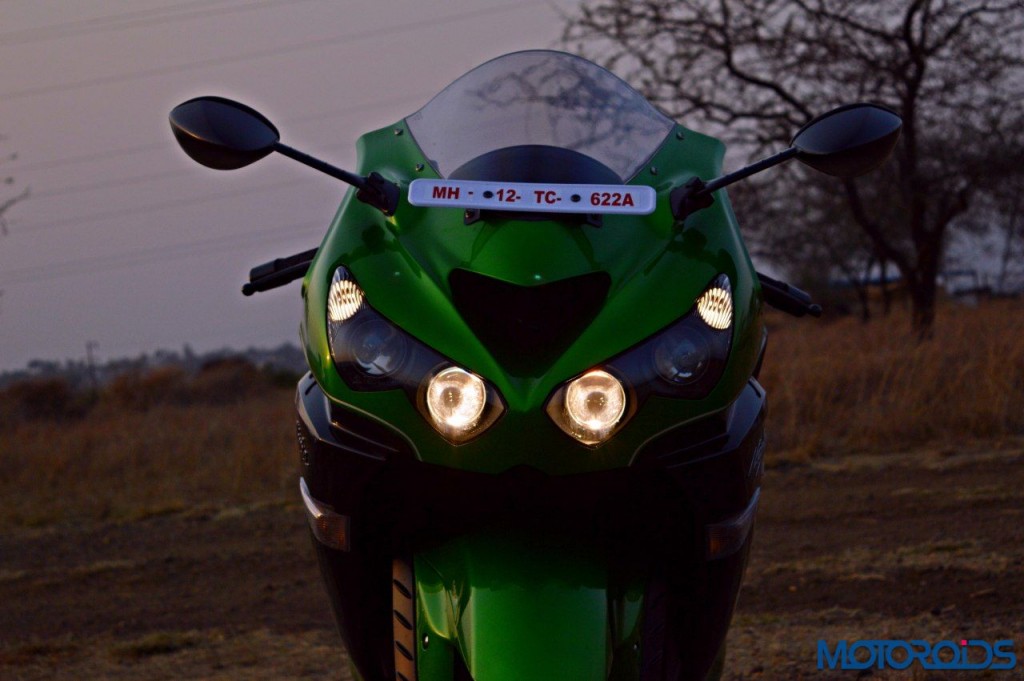 History has a bad habit of repeating itself, and almost all of us bear the brunt of this at some point. Your masculinity burns down into a blob of wax when something that you’ve been yearning for long, stands right there in front of you. More so, when that majestic, living monument of speed has been chipping away at your heart since it first left the sweetest taste in your mouth. (You may click here to read the earlier review). Although that same space suddenly feels parched and you find yourself numb, staring at that special someone like a defenseless animal. In our case, it was the 2016 Kawasaki Ninja ZX-14R, gleaming right in front of us, the sheen of its green testing the expansion of our eye sockets and the contraction of our sinking hearts. We knew it was about to tear us apart. We knew it would still keep us together. 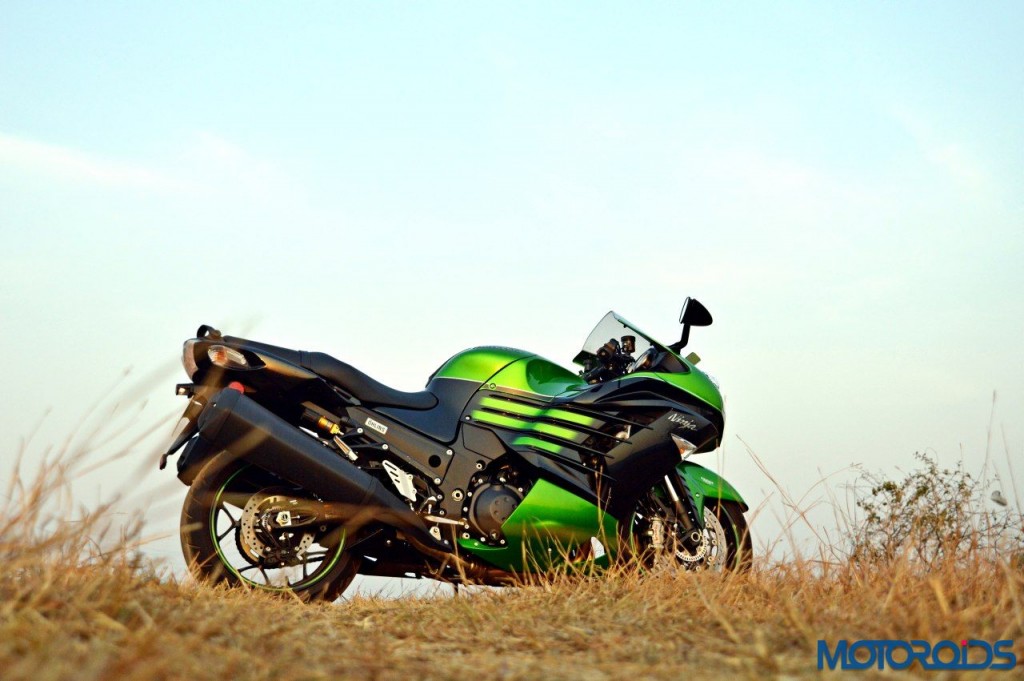 It has come back for a renewed assault with some new shields and swords this time around, still retaining every bit of that elegant monstrosity it is so revered for. It now wears its spaceship colours slightly differently, adding a little more black to its glittery fluorescence, three fingers striping some green camo near the air vents. 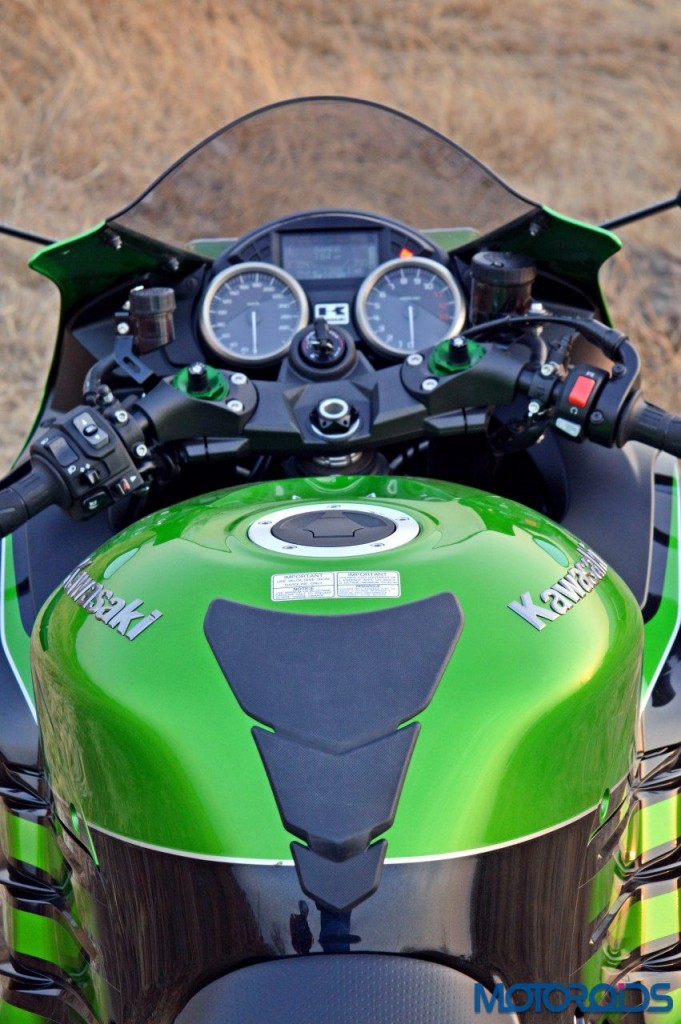 The steering setup has been slightly raised, pegs have moved a little further and the redesigned seat lets the commander get a better grip over things as he pilots this mission into outer space. It might not look svelte, but for form that follows function, this big Kawasaki is one of engineering’s beautiful monuments. 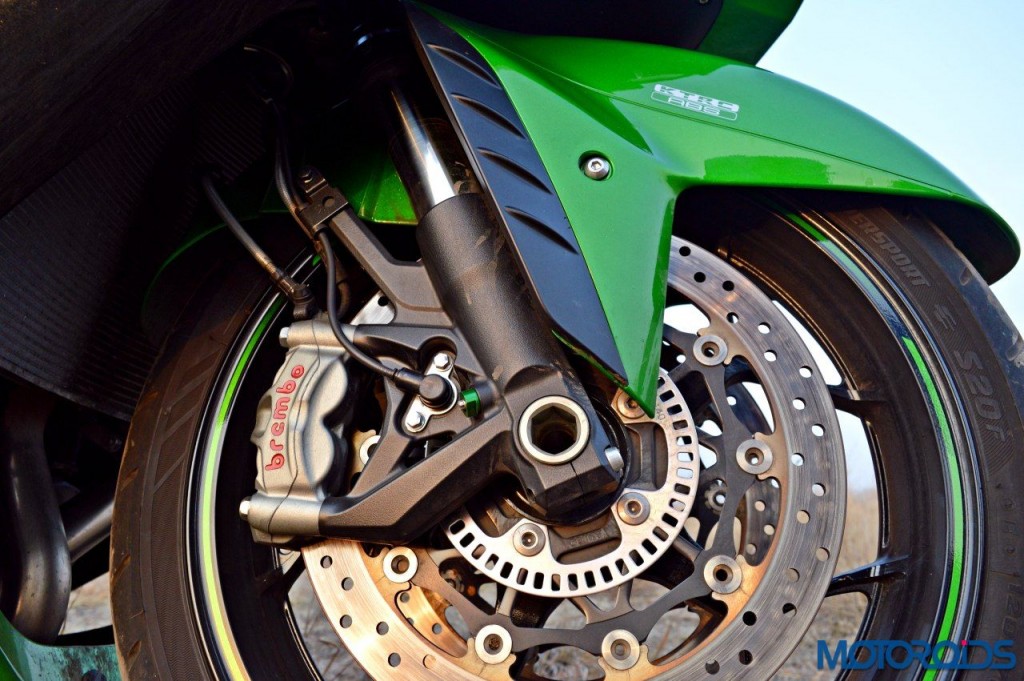 The 2016 Kawasaki Ninja ZX-14R also gets new monobloc braking hardware by Brembo at the front, which it shares with its supercharged cousins. 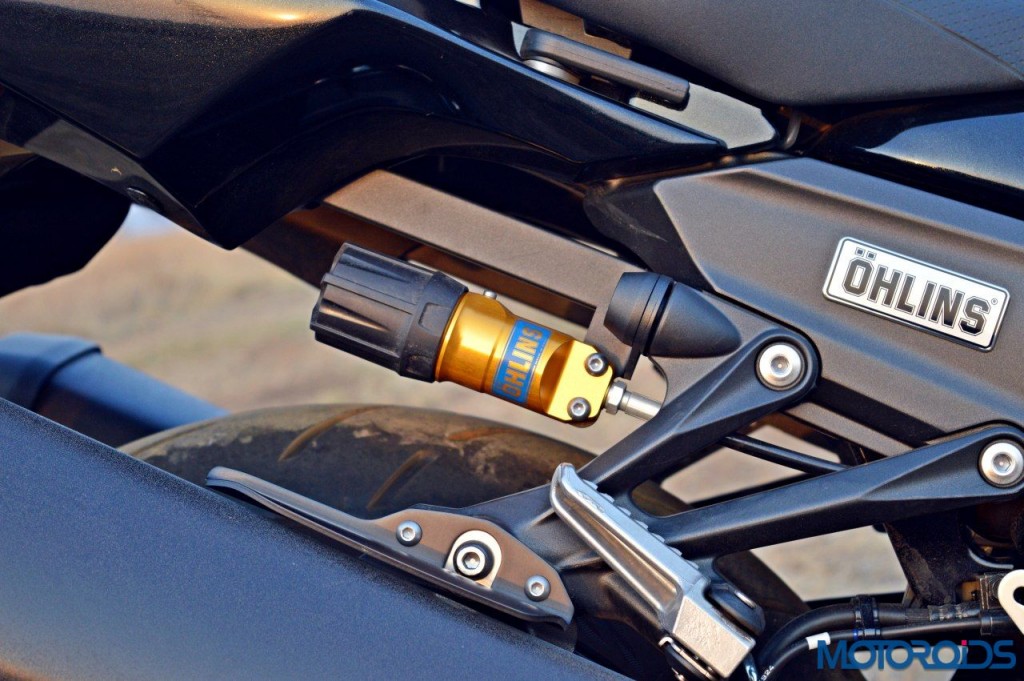 Then there’s a new Ohlins setup at the rear which offers remote adjustment for preload and lets you compensate for any living or non-living cargo you might carry on the rear seat. 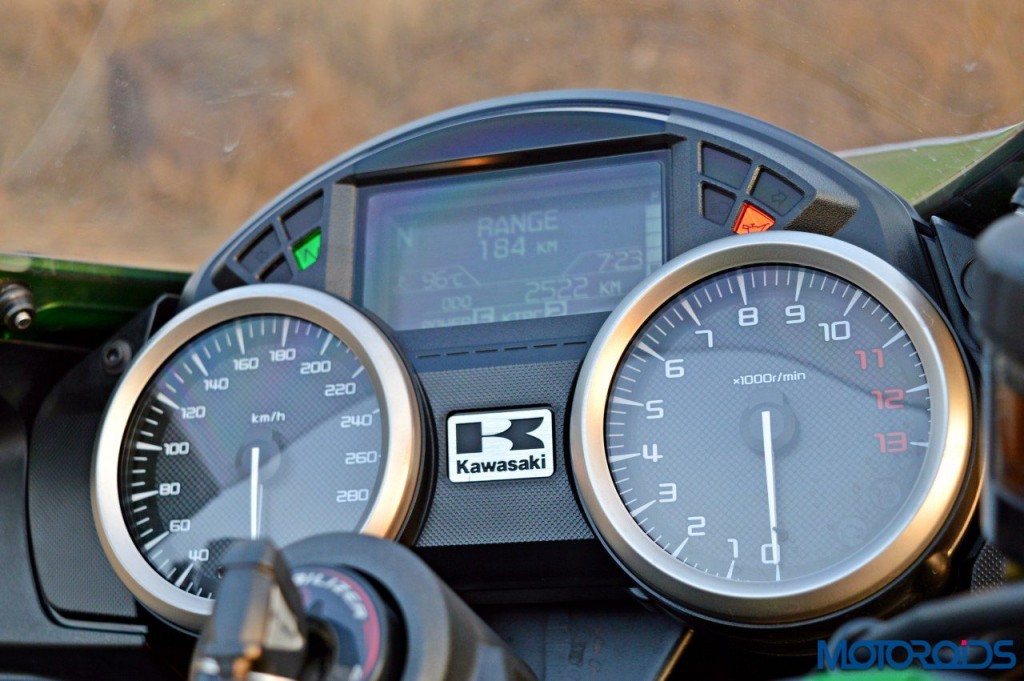 The large, informative screen can now switch between shades of black & white and there’s an ironic ‘Eco’ indicator if you’re just sailing around. 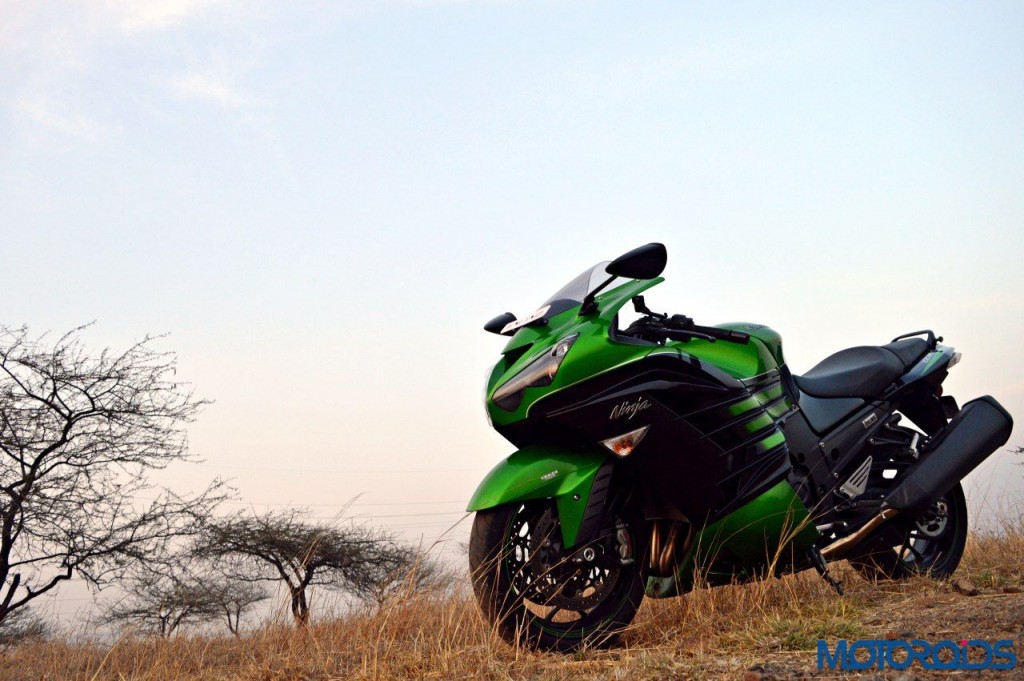 What could’ve made it more Cuban is the addition of a quickshifter, a steering damper and those Akrapovic cans it is available elsewhere with. Although, it still remains the World’s headiest mass produced Cigar that packs 210 PS (With Ram Air) of nicotine which spins your head at 10,000 clicks and 158.2 Nm of Tar-que to make your lungs bleed with joy at a puffy 7,500 rpm. 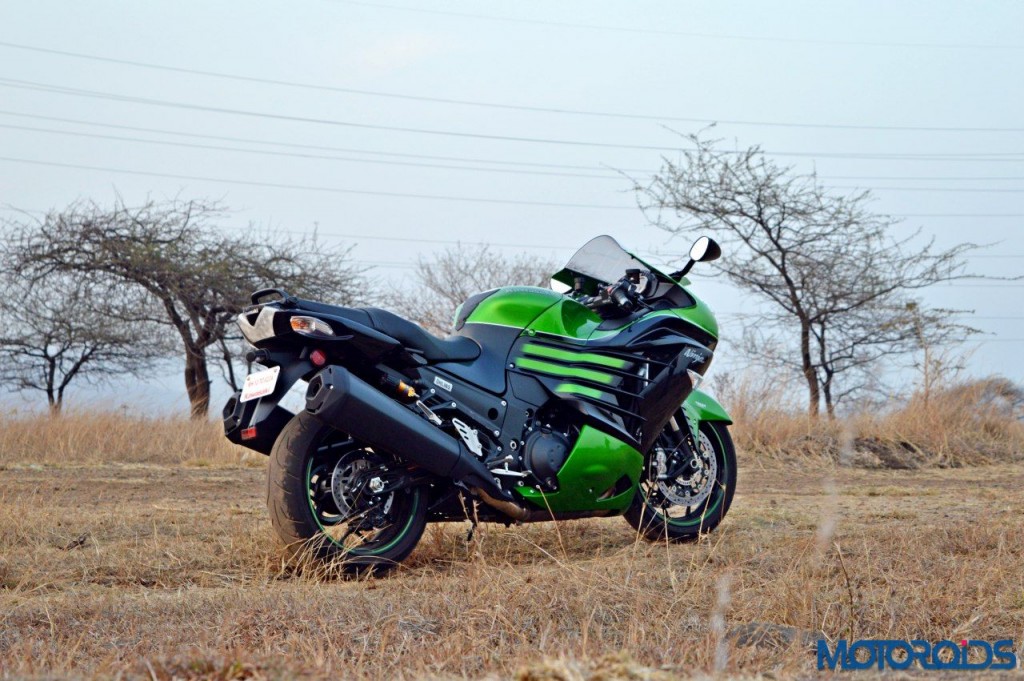 Our previous encounter still fresh, we know that this Ninja leaves a white screen of smoke behind in the wake of its velocity, terrorizes with its intensely carcinogenic performance and even when you slow down, it’ll let you enjoy the smooth after taste of an exclusive experience. Let’s strike a match then!

Light up and Smoke! 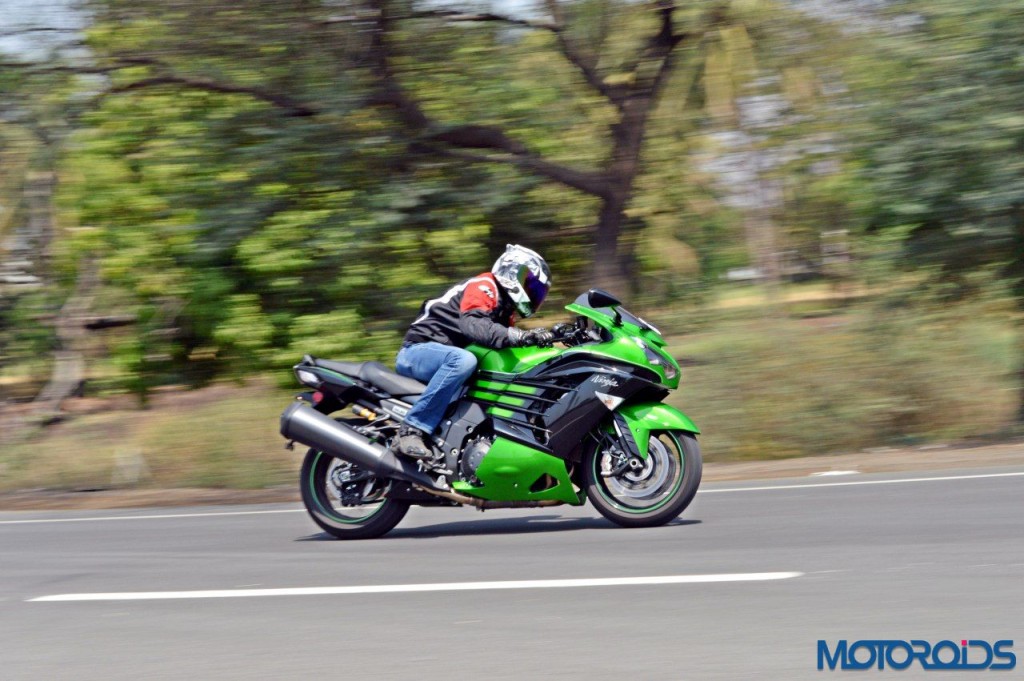 When something intimidates you visually, it takes a while to swing a leg over and let your adrenaline loose. The 14-R justifies the former part of the statement, but for the latter, it steams the sweat on your palms, the very moment you shift it into a ‘Stuttery’ first and come to terms with the turbine smooth motor. It wraps around all that visual might around you so effortlessly, you’re flummoxed when you realise that you’re astride a 269 kilo motorcycle. The clutch is easy on your wrists, heat dissipation is at its brilliant best even when the engine temperature shoots into the high 100’s and all the controls come to you like you have an umbilical cord attached to them. 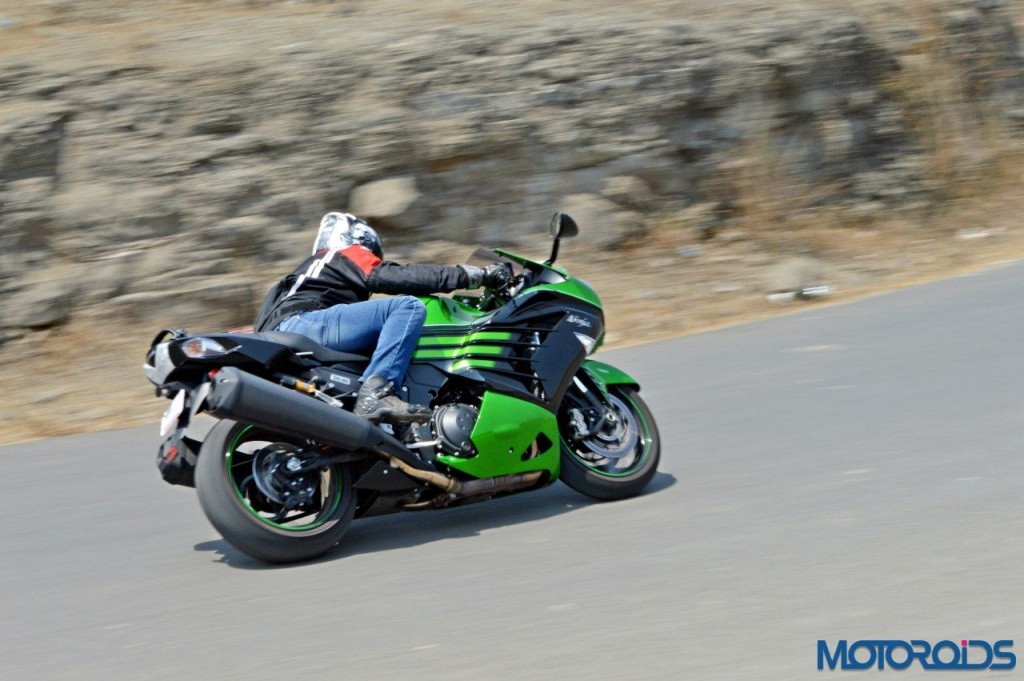 Since we knew that this motorcycle is as gentle as a mother if you’re a well behaved child, we wanted to revisit the Witch on the other side who presents the head of her own offspring as an offering to the Gods of Speed. Traction control switched off, power mode set to ‘F’, we were screaming inside the helmet as the tallish first gear would take it to somewhere near the 140 kph mark as the motor would hit its limiter. The sacrificial climb to the silly heights of velocity continued as we kept calling for the next gear, clutching the witch in Green, telling her we still love her. But for being possessed after 4000 clicks, her speedometer climbed towards the summit like a supernatural being and she took us right up to the molten edge of a volcano, ready to push us over.

Exorcism then, comes in the form of Father Brembo, who offers you a lever that makes some holy water run through to the 4 piston monobloc calipers. They grab the 310mm front discs by the hair and drag green Emily down from the ceiling in a whisker. If only the nature of these actions wasn’t as progressive though. The equipment sure is a fantastic life saver, but it would’ve helped if there was some more sharpness to the way things worked. The single rear 250mm disc didn’t leave much of a mark, but then since we’re front biased in our braking, it did its job fairly well to balance things out when called for a few times. 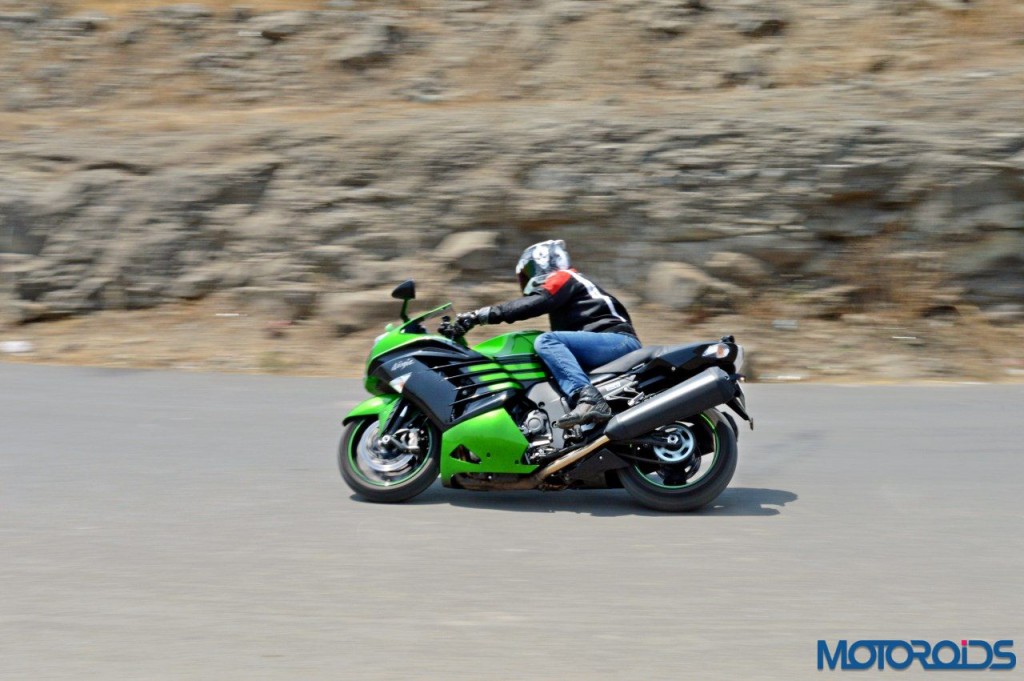 For the way the ZX 14-R handles, it shows a big middle finger to the laws of physics, general perception and the idiosyncracies attached with half wisdom. You look and it and you’re almost thinking that it hasn’t been built to do anything, but to go straight. But then the same weight vaporization magic slaps you hard when you’re attacking corners and it feels silly when something so mighty and with such a big wheelbase feels so nimble for its girth. 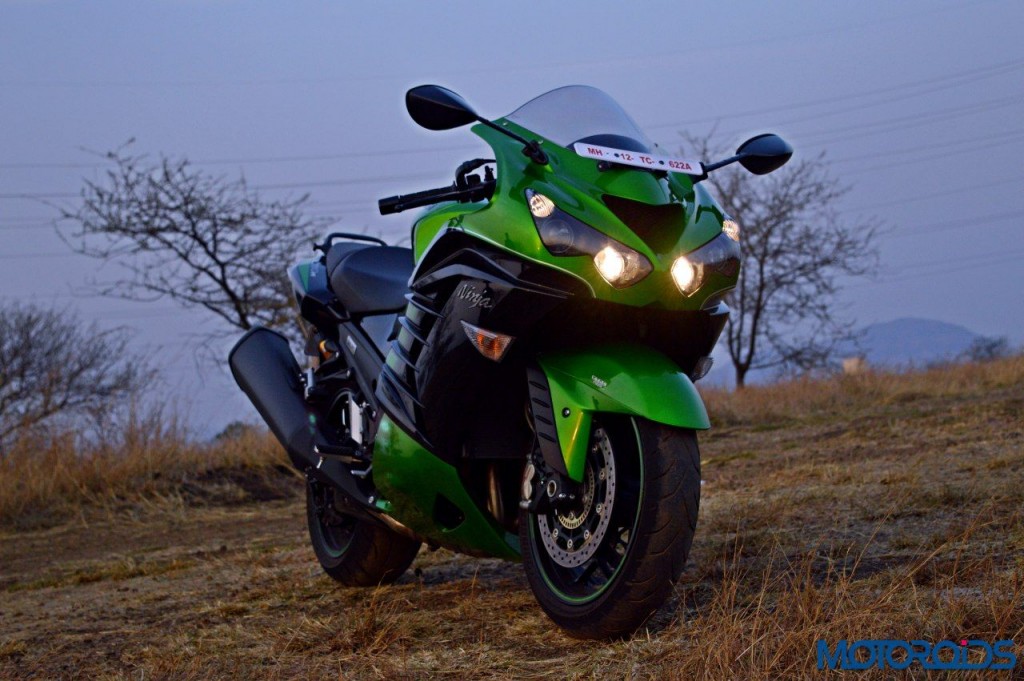 It isn’t as lithe through tight corners, but pick a line and it will oblige as you may, never communicating any unnerving feels back to the rider. Shifting weight as you pick and drop into S’ isn’t as much as a task as it might seem like, the spacious seat and centered gravity letting you have fun without testing the limits of your bravado. On long sweepers, the inherently well balanced chassis shines bright and stays put, helping you carry fast lean angles, where the trustworthy throttle plays a big part in letting you know just how much are you feeding this animal before it bites into your arm as well. 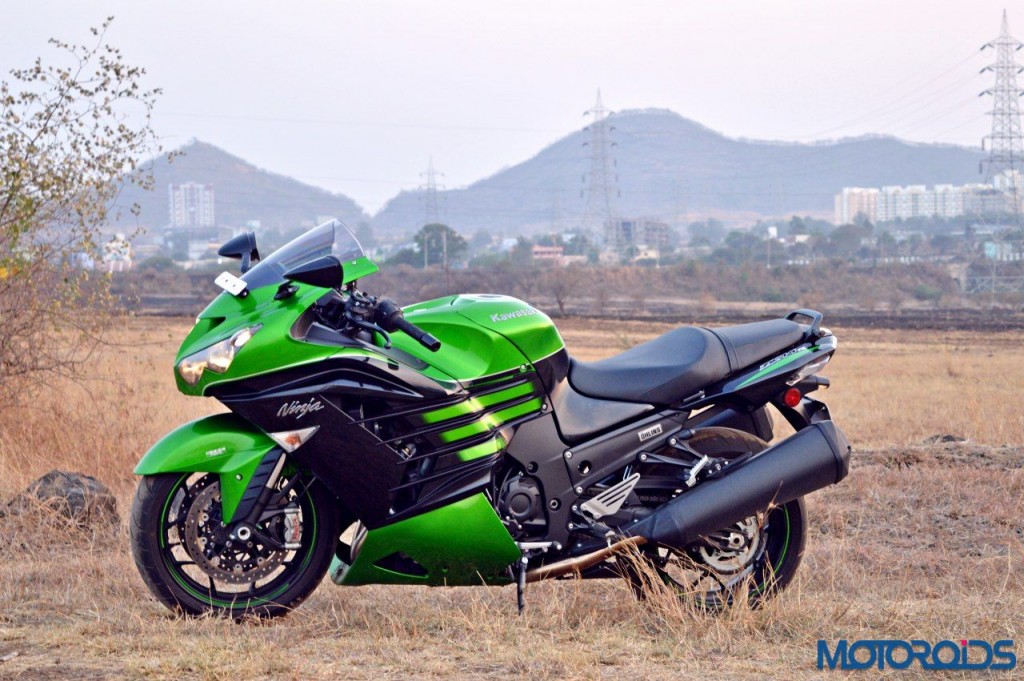 The front felt too talkative than what we would’ve liked, but it could’ve been just the tyre pressure. The suspension at both ends was set at halfway levels, just right for our conditions, which translated into the big Ninja travelling over undulations with utmost ease. Depending on your preferences though, you may change the rebound and damping at both ends according to taste and surface. 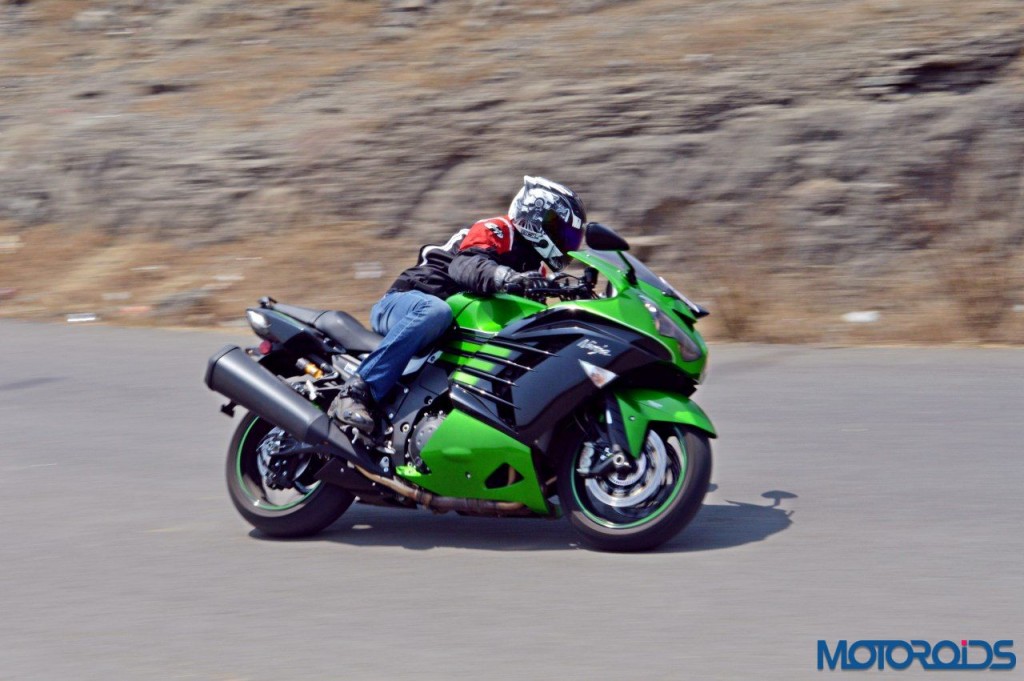 Which brings us to what makes this motorcycle truly special and stand out, even when there’s almost equally fast and brilliant machines out there one could buy. You see Mythological Heroes and their feats are etched in literature that gets passed on for many generations. There’d always be new characters who’d come and go, but the point where it all began is never forgotten. The Undercut and High Crop sure is in vogue, but the timelessly powerful enigma of swept back hair or a simple side partition will always be swooned over. 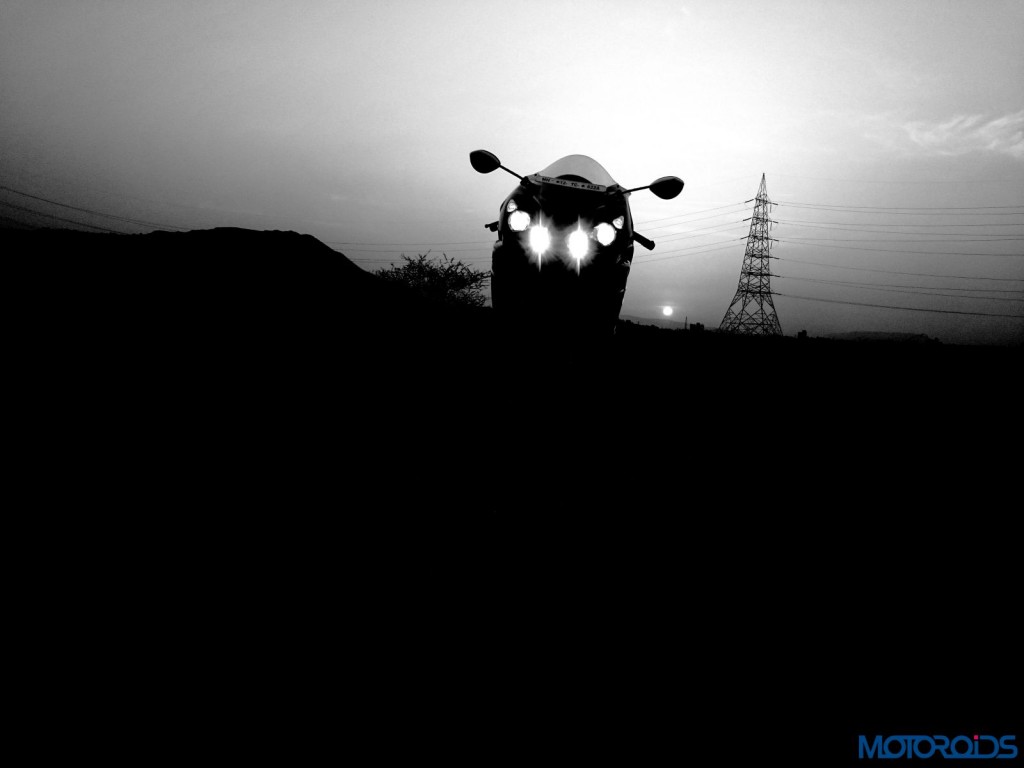 Motorcycles will become better, melons will taste like lemons, men will bear babies and menstruate, but our love for this machine will remain. Some species are originally evolved, brilliant at birth and anything beyond only makes them better. The Kawasaki Ninja ZX-14R is the original of that species. We aren’t very brilliant with our vocals, but if there was a single star we’d sing for, this will be it! 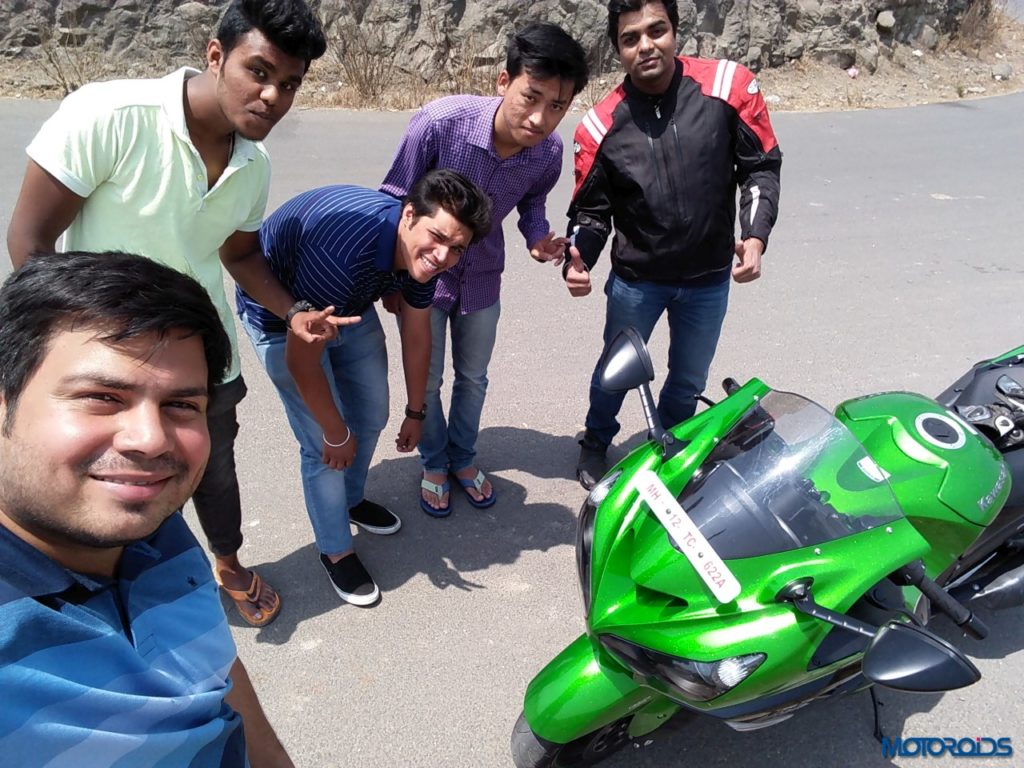 Big thanks to the trio of Eric, Sunny and Lamthoi from Pune for guiding us to a good location for the shoot. Look forward to meet you again, pals! 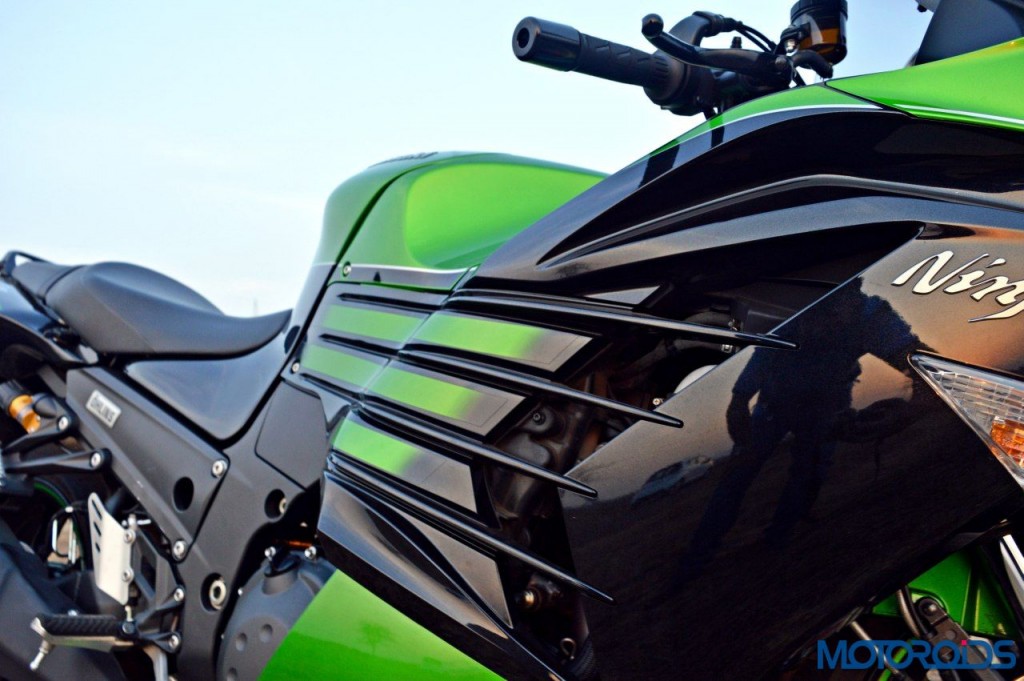 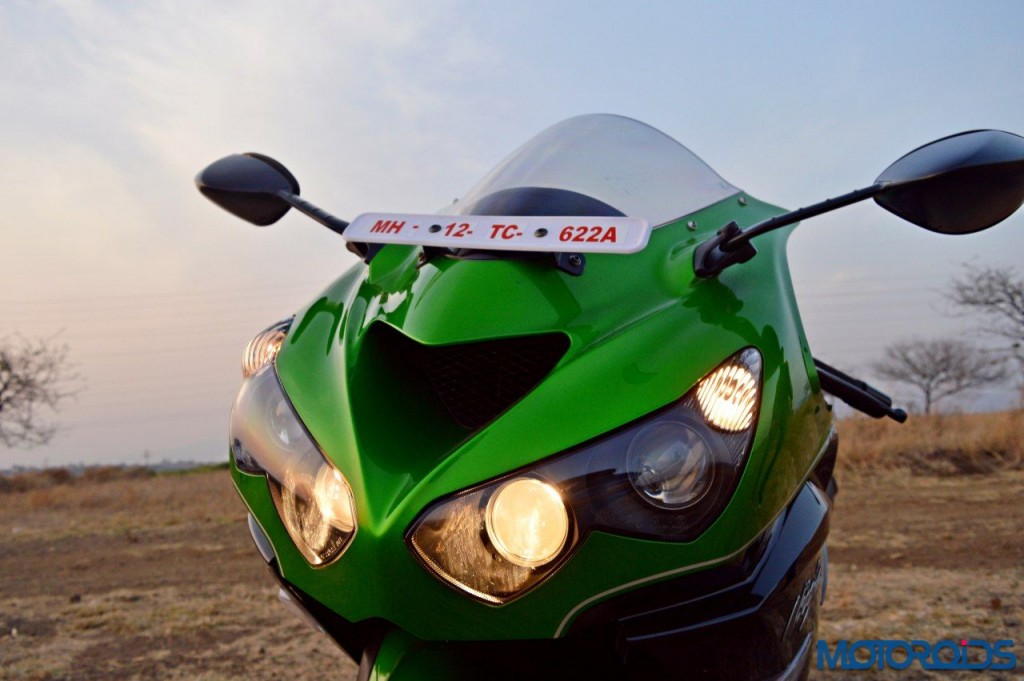 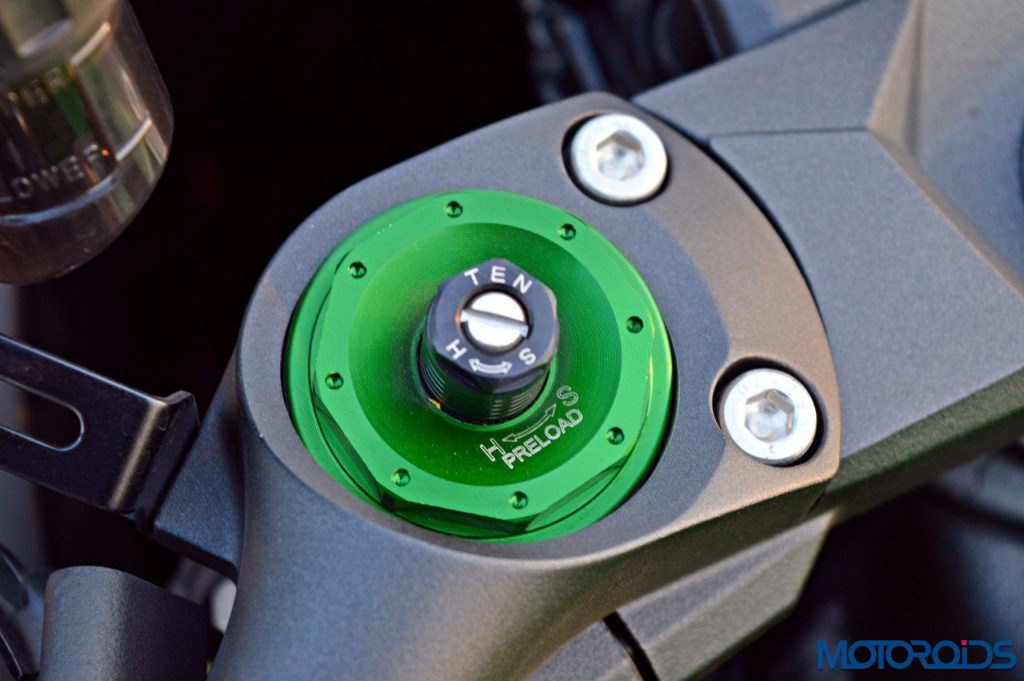 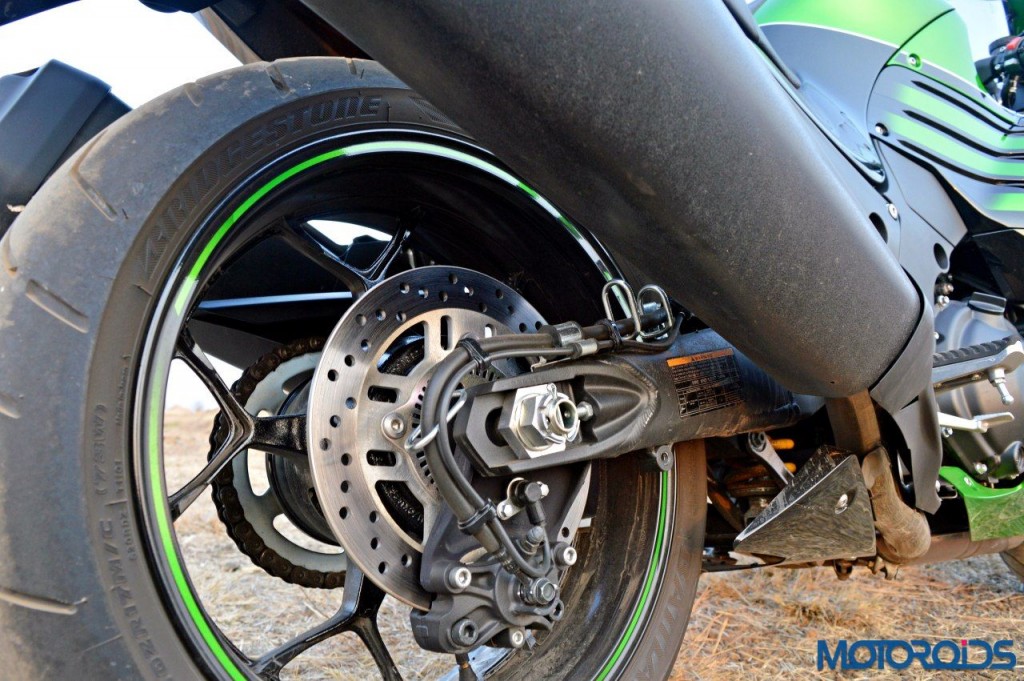