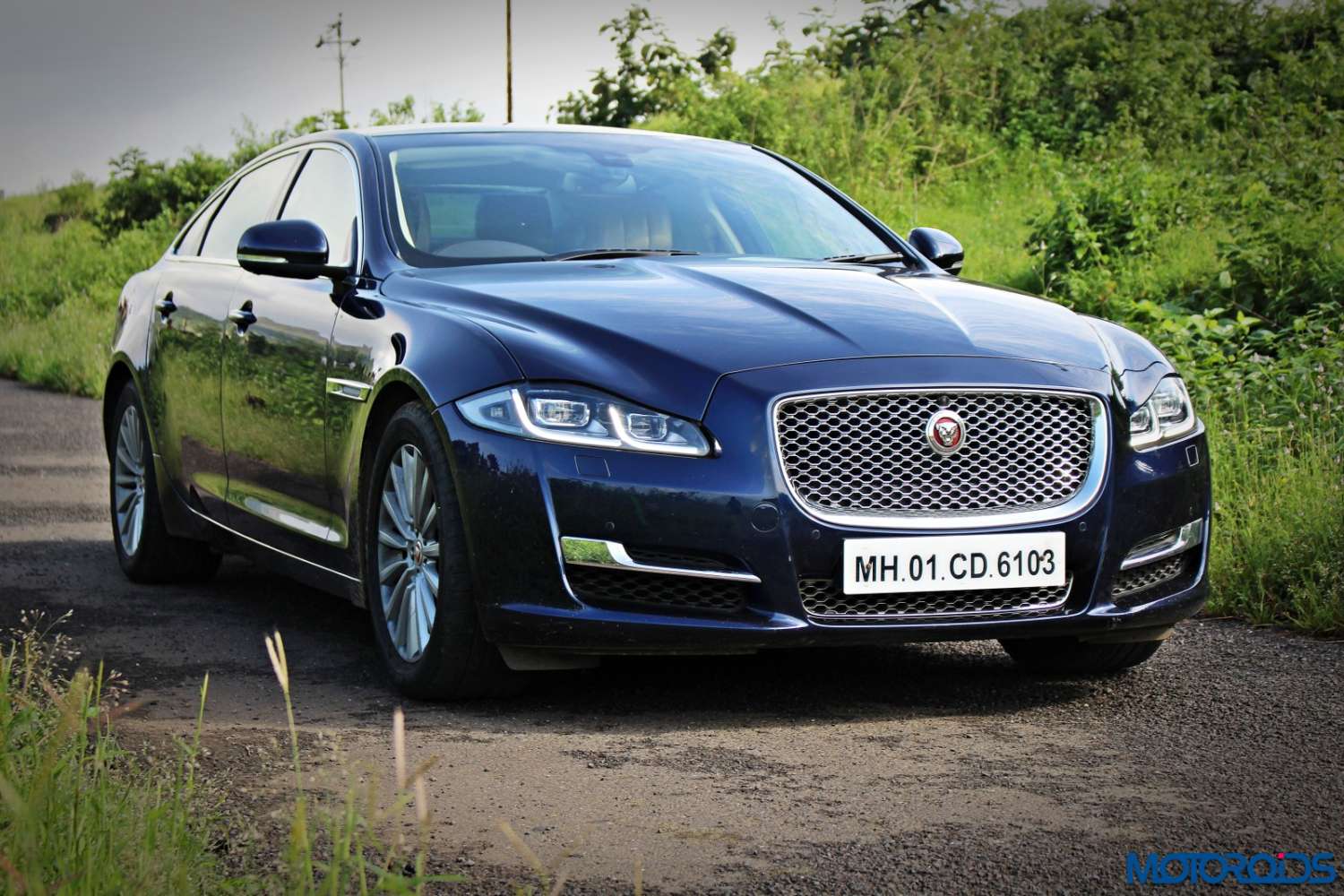 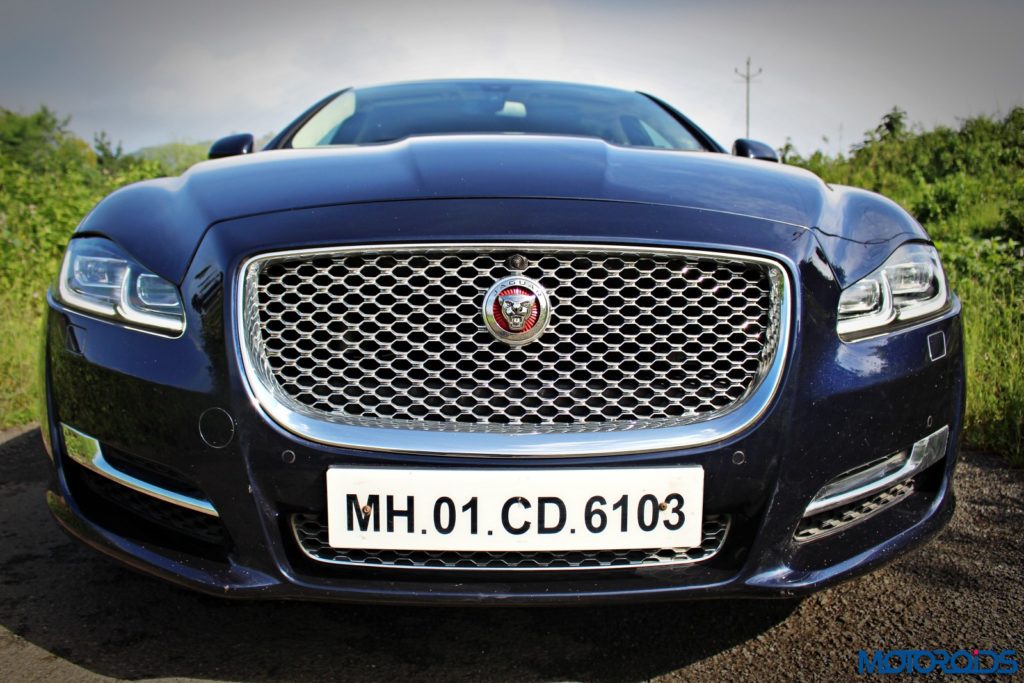 It was 2002. I had started to call the city home after my schooling stint in a sleepy town. Walking through the bylanes of Fort, lined with British architecture, I was making my way towards Sterling cinema to catch an afternoon flick. Something just as British then regally pulled outside Cathedral & John Connon. A gentleman and his little one stepped out and walked in a rich fashion towards the school’s gates. 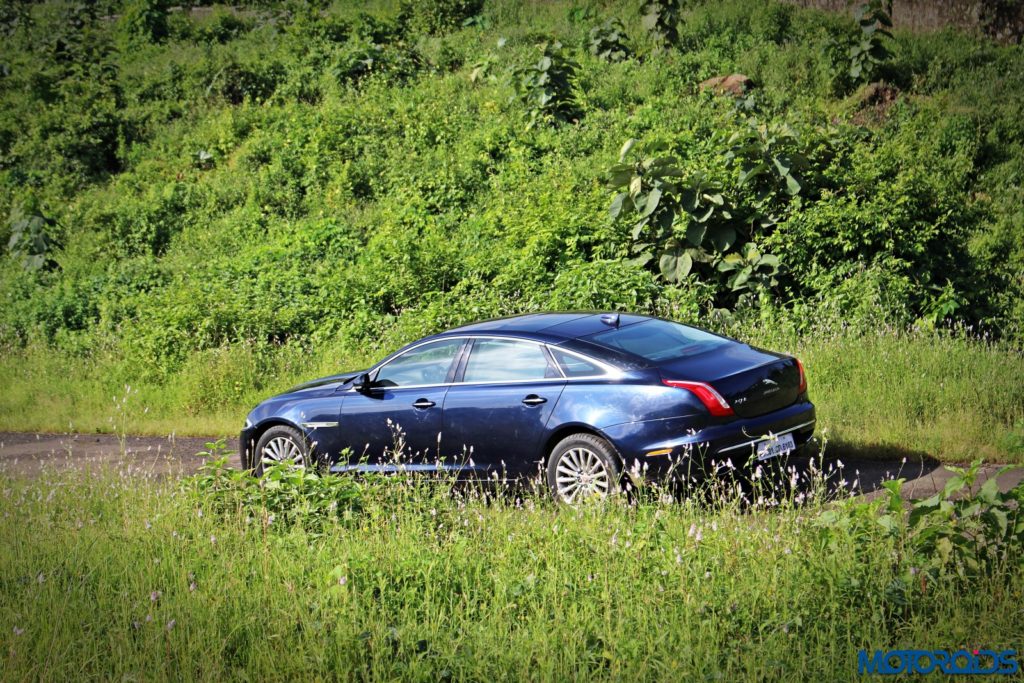 I remember I was munching on some cheap potato chips, and its crispness was suddenly dampened by the chauffeur’s appearance, who was wearing a crisp suit, a black hat and white gloves. He wore gloves! As I looked at life on the graceful other side, a British Green Jaguar XJ stood there and teased my humble life. 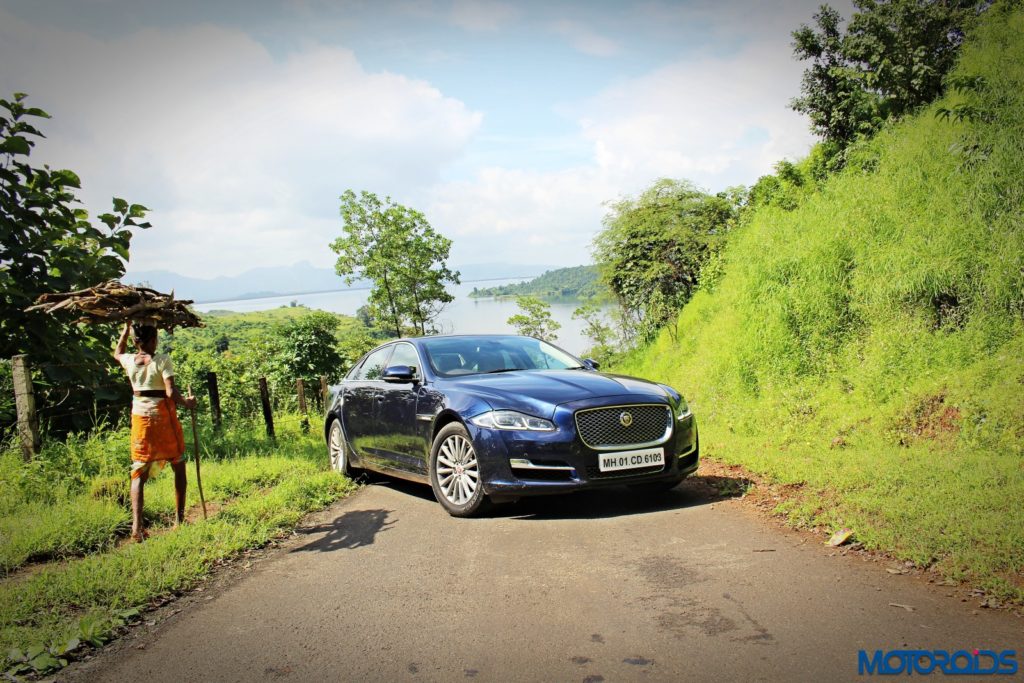 Fourteen years later, I find myself in one. Not in the backseat dressed in a Reid & Taylor though, but in my work denims and shirt, behind the wheel. That look on my face when I was young is replicated on another chap’s face this time, as he stares at me as I munch on my still cheap crisp fries. There must be something about fried food and Jags. Anyways, allow me to tell you more about the biggest cat from Britain. 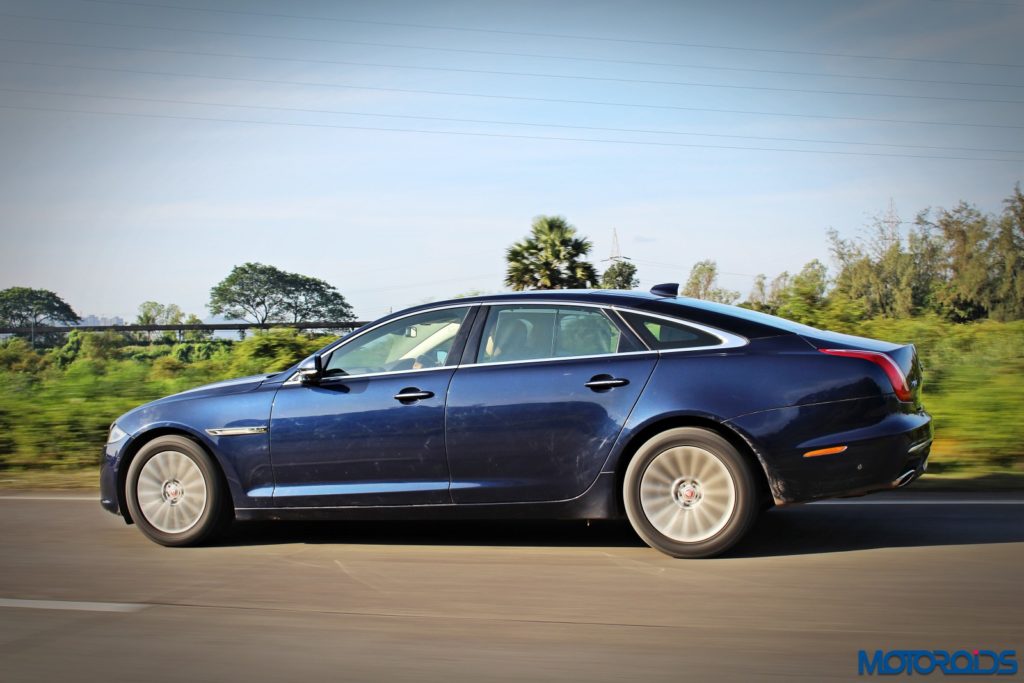 Once inside the yacht like cabin, thumb the starter to life and the drive selector presents itself in a princely fashion. It rises from that center console like it’s making its way to the podium to be knighted by the Queen. Yes Sir! And if her highness had to nominate a car for the Commonwealth games in the long distance running category, the Jaguar XJ will be right up there with the Ghosts and Flying Spurs from the isle. Powered by a 3.o liter V6, this diesel cooked haggis packs a 296 bhp and 600 newtons punch. It makes the XJ leap from naught to hundred in 6.2 seconds, while top speed is restricted to 250 kph.

Off the mark, the XJ takes off in an eloquent manner. Real progress is brisk for a vehicle of this size, but the effects of velocity are well contained and things feel relaxed and dialed down inside the cabin – just how things should be inside a luxe barge. Mash the pedal and you realise, that unhurried, yet brisk progress is courtesy of all those 600 newtons gushing in properly post the 1500 rpm mark. 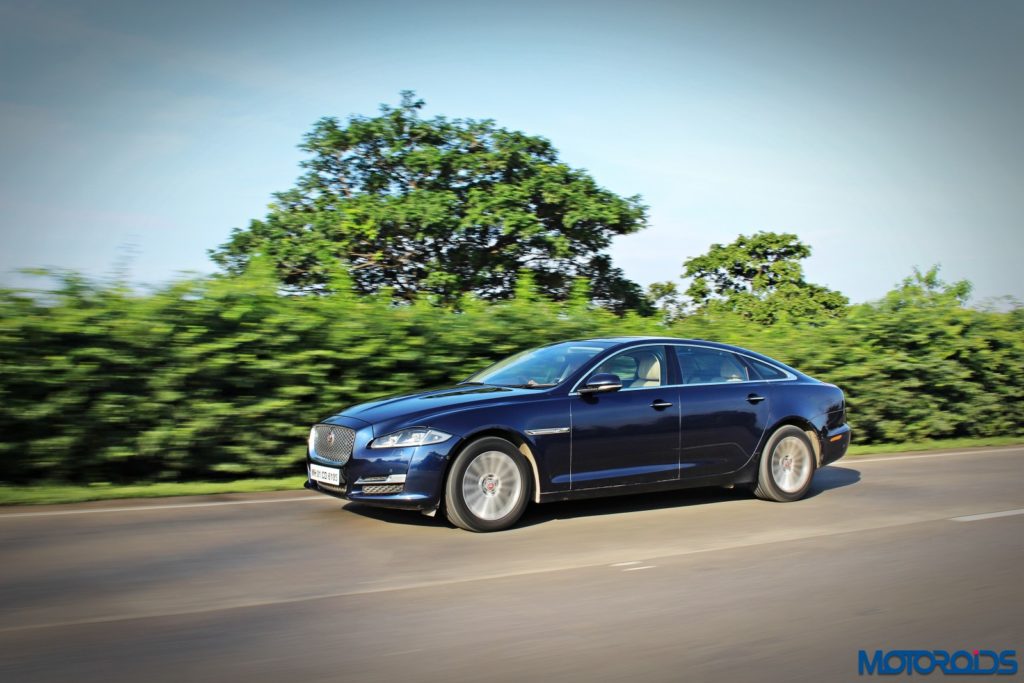 From there on, that V6 diesel revs quite freely if you like till about the 4k mark. Quarter pedal dabs will make that slick 8-speed box shift early and settle into a cruise. If you ask the box to suddenly shift from camper van to ariel atom mode though, there’s that very little hesitation to kickdown. But if you want that, you earned your money, but no wisdom, and you’re reading the wrong review. If you’re hellbent though, there’s a sport mode which turns things sprightly, makes the box hold on to ratios for longer.

For all its girth, this big cat has pretty good claws it digs into those brake discs. Slowing things down from high speeds is a confident affair and the system feels well modulated, while there is a connected feel that gets relayed to your foot when you push the pedal. 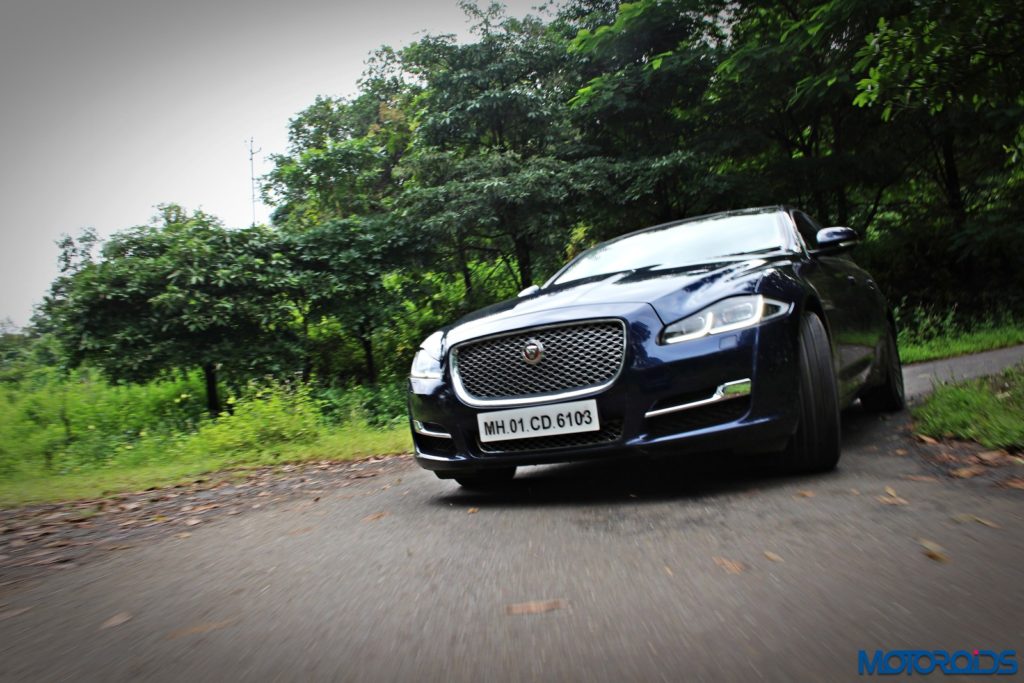 This isnt the sort of machine anyone would ever buy solely for the thrills of driving. Yet, I had no choice but to thrash it around some bends. Because I had a car the size of a British isle, all to myself, and a lot of time to kill. Surprisingly, for all its length and all that weight, the XJ felt like it had shrunk in size and feeling as though it swas the size of an XF around corners. It doesnt obviously feel as agile as a hare when shifting weight and changing directions, but it feels solid, flex free and poised, taking each turn at a time.

The steering system is surprisingly quick and precise, allowing you to place the car exactly where you intend it to. What’s noteworthy is that little smile which appears on your face when you power out of a corner and that feeling of things being propelled by the rear wheels makes its presence felt. 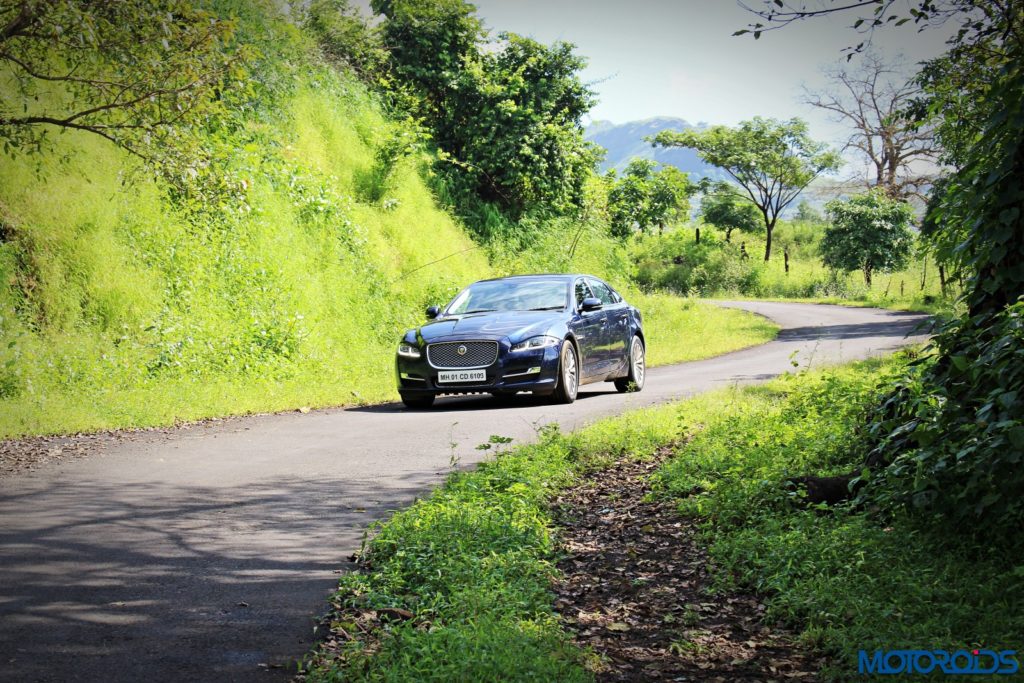 The XJ’s ride quality has that firm tinge to its plush. It glides over large humps and undulations at crawling speeds like there’s some air cushioning to things. As speeds build up, the suspension tautens its muscles, the steering gets some weight and no wonder the XJ makes a background appearance in these new Bond movies. Lessern know MI6 agents swear by it perhaps. The ride isn’t isolating like the XJ floats on clouds, especially when the car rolls over little things like section gaps on bridges and little ripples on the road. Everything else, it takes in its stride and dismisses. 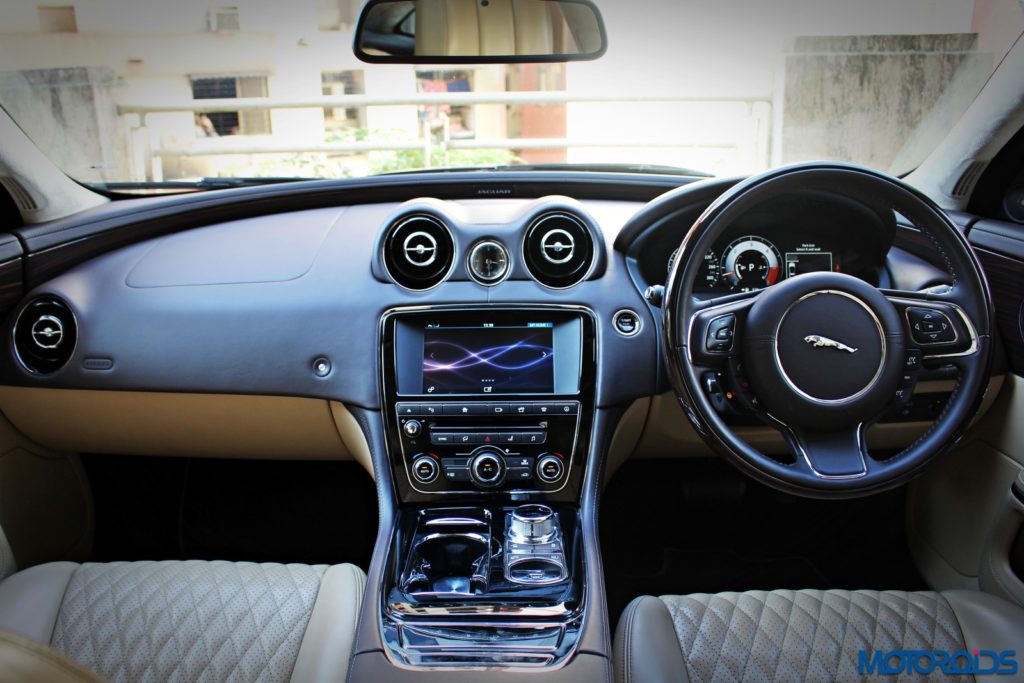 Once inside the cabin, there’s a lot of forest that greets you in the form of wood and hide. What catches your fancy is the swooping dashboard and an oval shaped wooden inlay that runs under the windscreen and seamlessly through the doors. The seats are supremely comfortable for all body shapes and all of them get a massage and cooling function for tired bones and musk filled sweaty shirts. 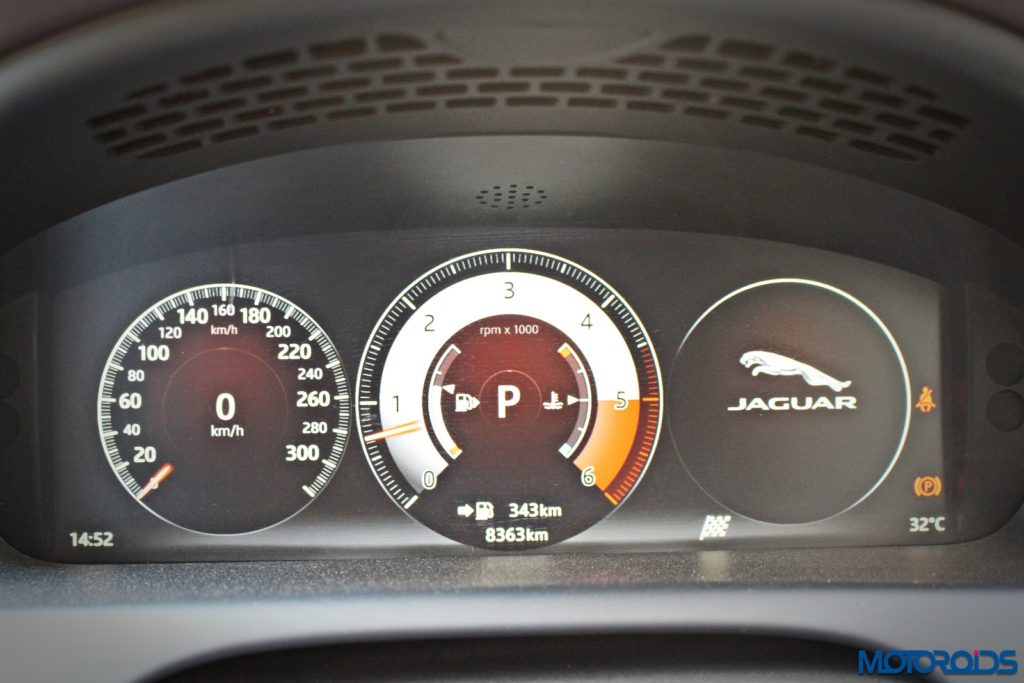 An electronic display fills the instrument console, offering all sorts of information that you’d need. Looks crisp and thoroughly modern. The same cannot be said about the central multimedia unit though. Although it lets you control the seat functions, multimedia, aircon, navigation and everything else, it lacks that modern touch somehow. Oh and the background looks like a straight lift from Sony Xperia phones. Could be the other way round. We don’t know. 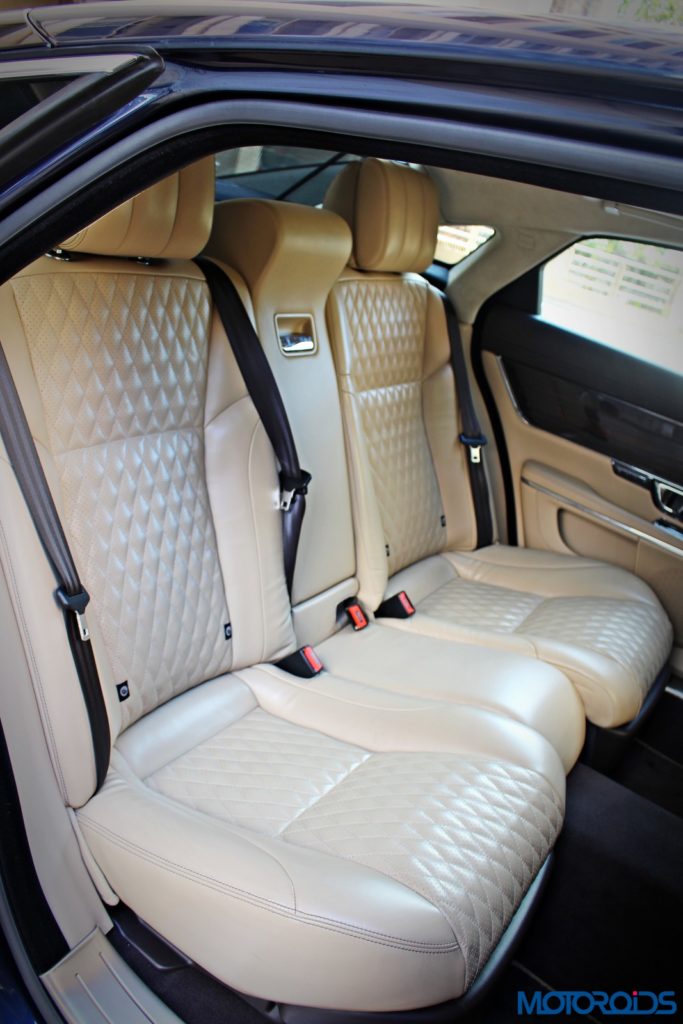 Moving towards the back, the seats on their own are supreme, but then the leg space isn’t what you’d call opulent for a car of this class. Adding to that is the foldable tray table, which fouls with your knees while you unfold it. Little things, sometimes they count, sometimes they don’t. There’s a dual stage moon-roof for you to reach the stars and two screens attached on the front seat backrest if you’re the telly type. 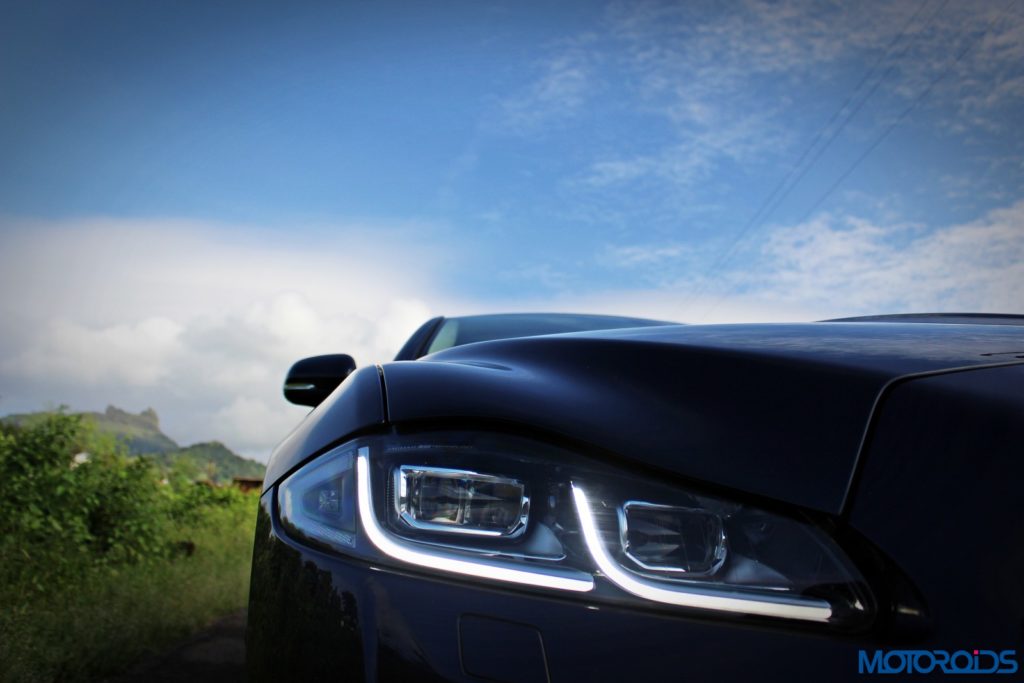 Not much has changed since the current gen XJ first came into production. It still carries that distinct grace in its bodywork and save for those Cadillac inspired tail lamps, cuts a real regal picture. New LED headlamps with twin L-shaped DRLs are now standard and add some more sharpness to that fearsome looking front. The XJ’s styling is vocal and expressive about its identity. There’s something about the styling that still makes people pause and admire its high born presence. 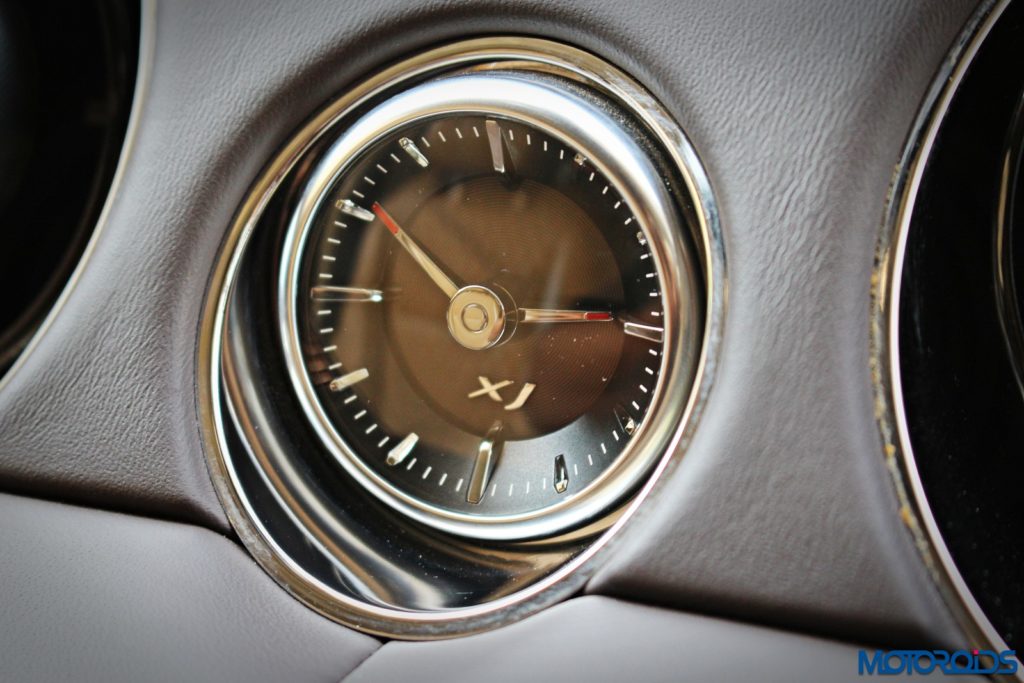 When time’s on your side 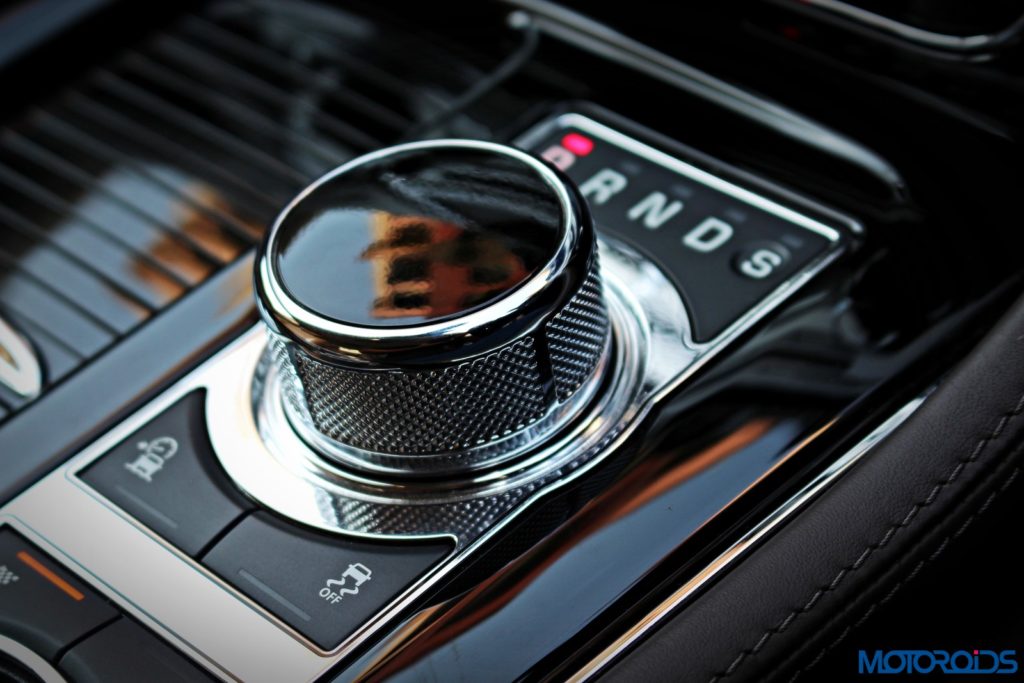 That thing has a thing for dramatic entries 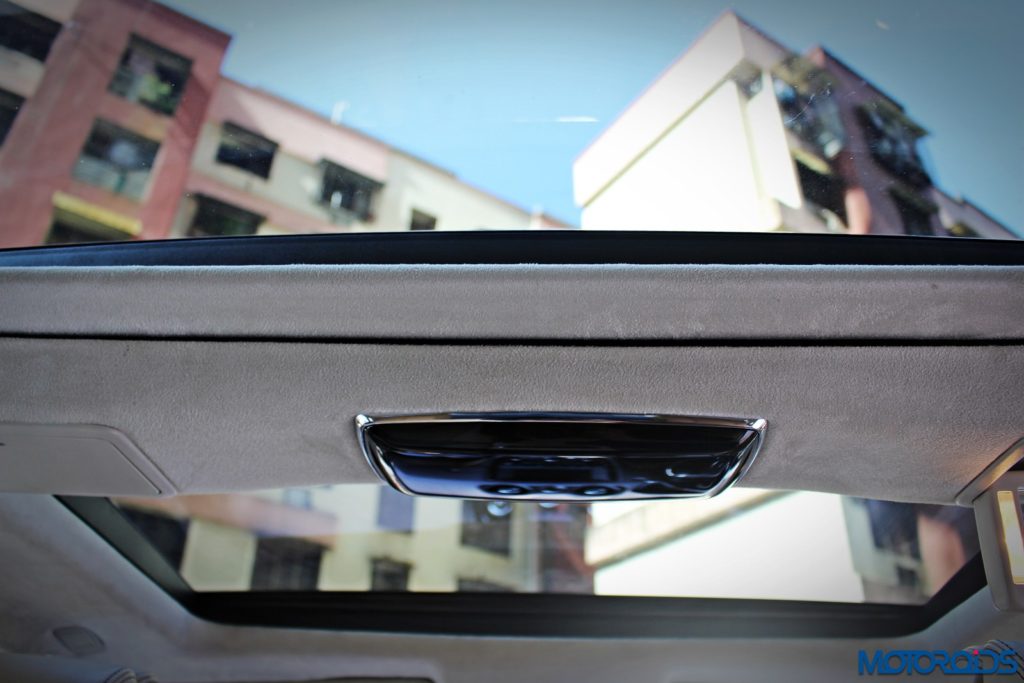 When one isn’t enough to reach the sky 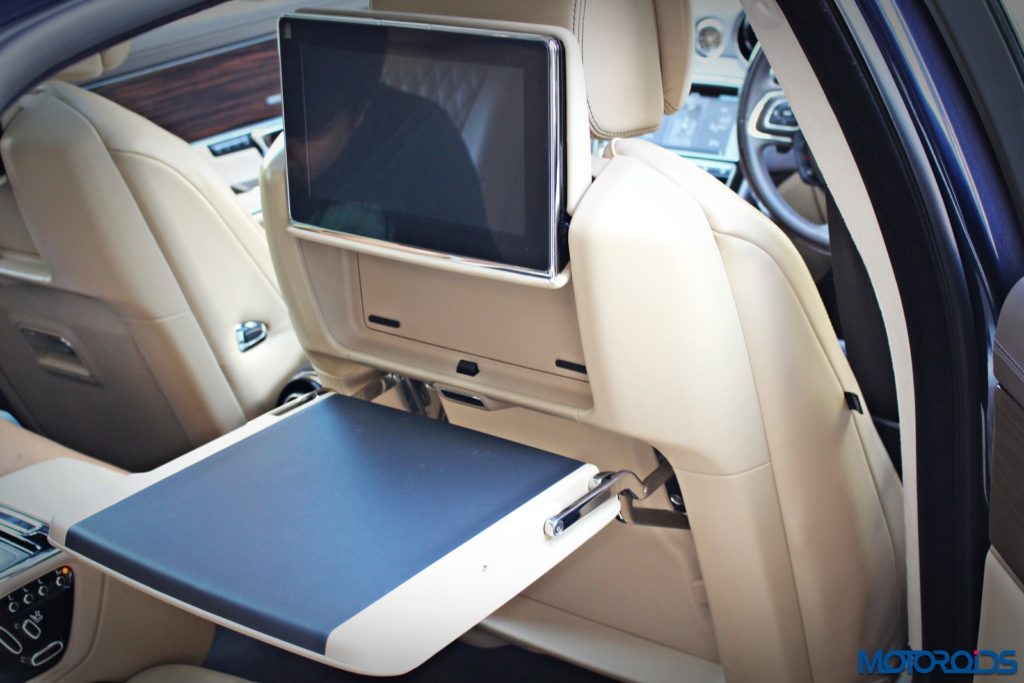 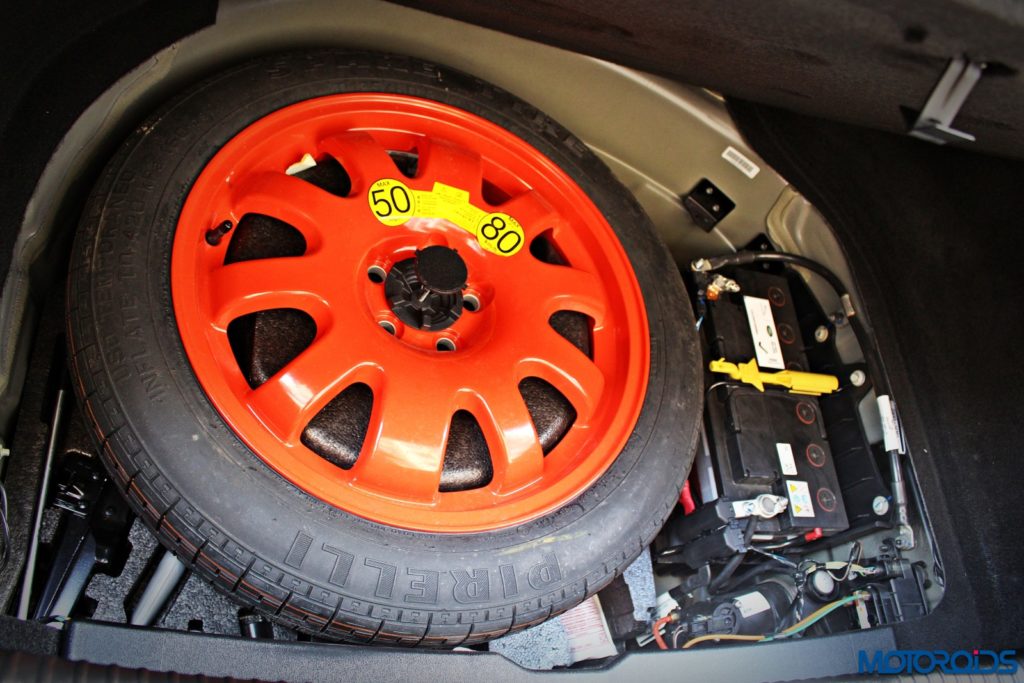 Space saver spare gets the battery to chat with 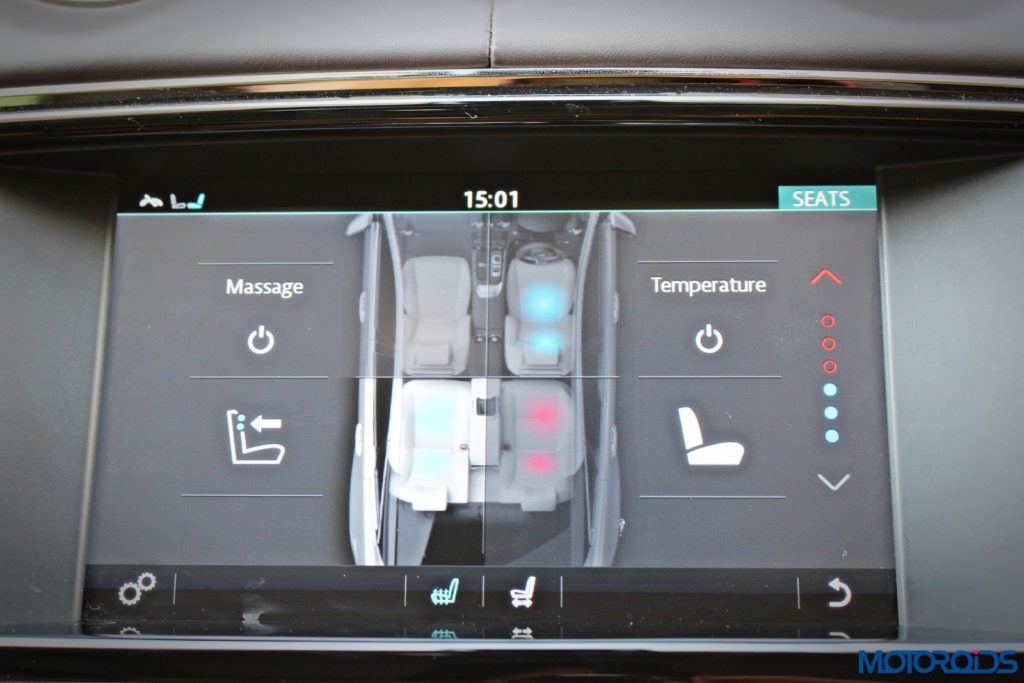 Tickets for four to Bangkok please! 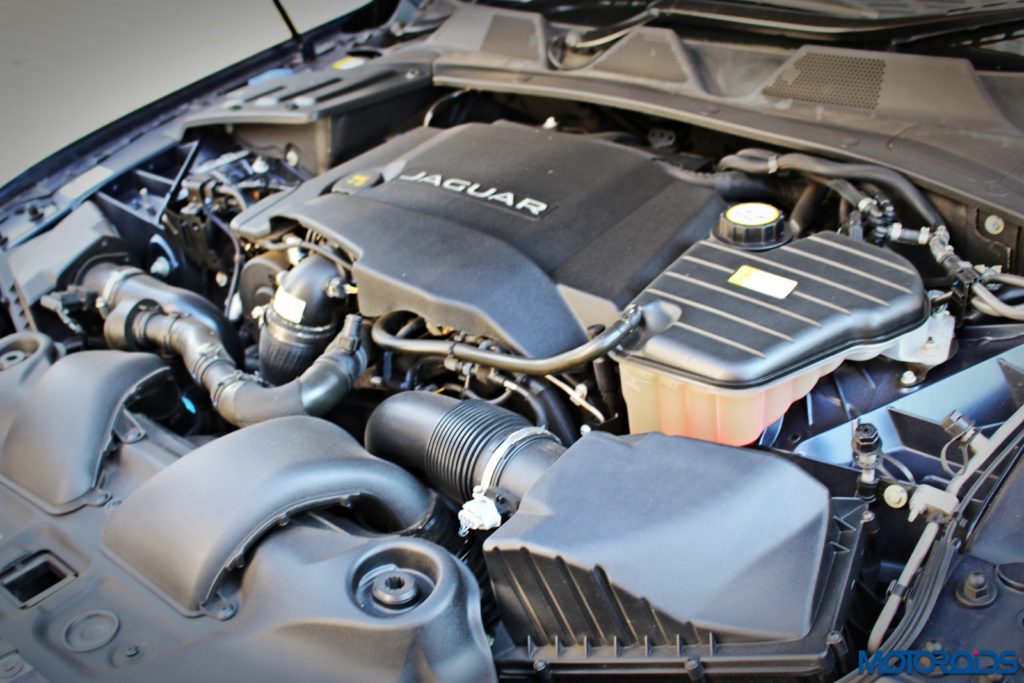 Punchy motor has enough grunt to push this 2.5 tonne cat like its a horse 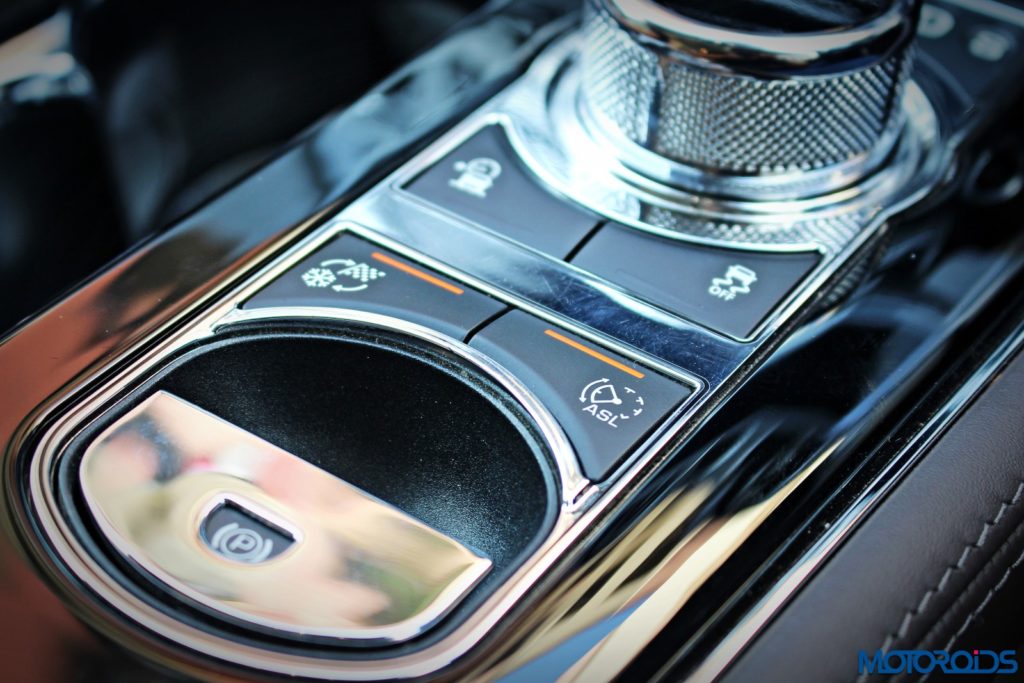 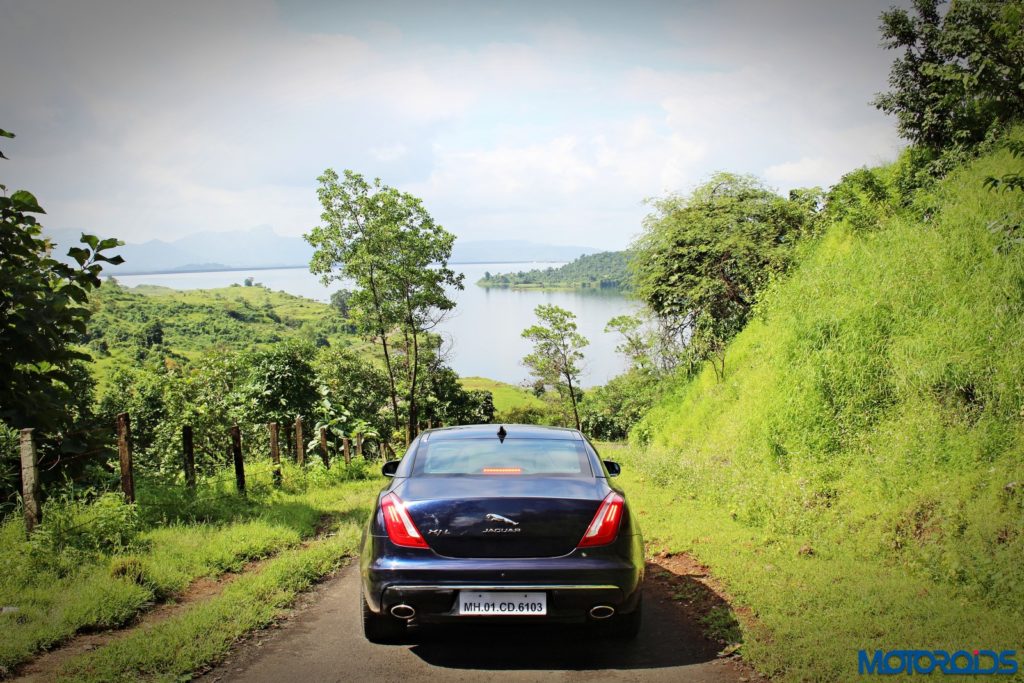 If you must’ve noticed, throughout the review, we haven’t mentioned any of the XJ’s competition. The reason? Unlike the all machined German trio, there’s a lot of soul to the XJ. It looks like the sum of many desires. Looks like the metallic culmination of all that sweat which will flow over the years. It wants you to get there. It is an inspiring piece of metal that way. These qualities stand in isolation and just cannot be compared. The XJ is a reason to get wealthy, and a strong reason at that.