Home News Yamaha YZF-R15 V3.0 render has got us all excited 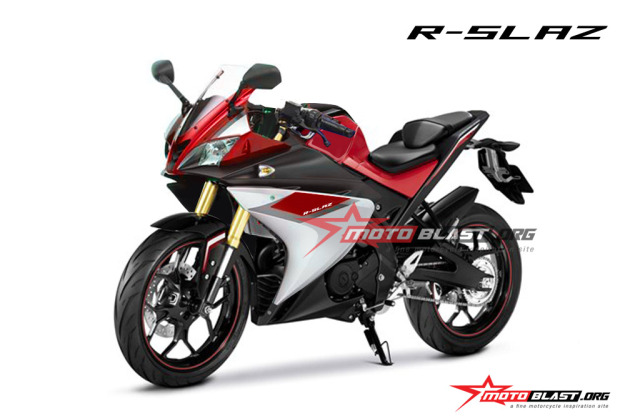 One of the most awaited motorcycles for 2015 was the third installment of the Yamaha YZF-R15. However, Yamaha decided to roll out a motorcycle with the first generation model’s design, clubbed with the mechanical upgrades of the version 2.0, and came out with the YZF-R15S. While the Japanese two-wheeler maker has remained tight-lipped about any further details about the YZF-R15 V3.0, motoring portal MotoBlast came out with their own speculative rendering of the 150cc motorcycle.

This speculative rendering of the third iteration of the YZF-R15 has been designed over the recently launched MT-15, the naked roadster version of this 150cc motorcycle with the tuning fork badge. The motorcycle will most likely share its mechanical bits with the MT-15 and thus is expected to come loaded with an upside down fork upfront – an equipment that was not seen on the previous models.

Moreover, the new R15 is also expected to receive an updated fascia which somewhat resembles the YZF-R125 and the YZF-R6. The sharper dual headlight is expected to come along with a faux air intake to enhance the aesthetics. The render also speculates that the wheels would be borrowed from the MT-15. But the biggest change visible is the lowered pillion seat, yet again borrowed from the MT15, on the upcoming model.

The third generation model is expected to carry forward the mechanical setup and continue to be powered by the same 149.8cc, SOHC, 4 Valve engine capable of delivering 17PS of power and 15Nm of torque. The engine will come mated to a six-speed gearbox.

While the render has created some excitement around model, we see the render as a rather underwhelming exercise in design. Except for those upside down forks, we find the current generation (version 2.0) R15 more exciting to look at. We’re sure many of you would have a different opinion, and we’d be glad to hear back from you if you do.

The motorcycle is due for an update and we really hope Yamaha comes out with some announcement at the upcoming Auto Expo in Delhi.