Volvo Cars has rolled out its first locally assembled car, the XC90 from its plant in Bengaluru. Earlier this summer, the company had announced that it would start assembly operations in India in 2017. The assembly operations is located near Bengaluru in southern India and focus on models based on Volvo’s SPA modular vehicle architecture. Apart from the XC90, more models on the SPA architecture are slated for local assembly and an announcement on the same will happen at a later stage. 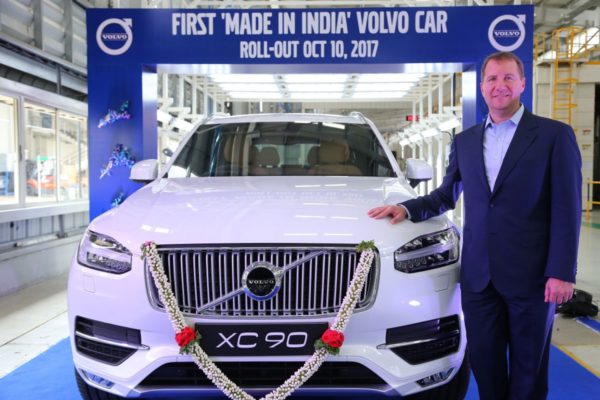 Volvo Cars is working together with Volvo Group India – the truck, bus, construction equipment and Penta engines manufacturer, for its assembly operations and is making use of the company’s existing infrastructure and production licenses near Bengaluru.

Speaking on the occasion, Charles Frump, Managing Director, Volvo Auto India, said that it’s a moment of great pride for all of them at Volvo Cars. The roll-out of first locally assembled Volvo Car speaks volumes for the company’s commitment to grow further in India. The last three years have been good for them in India and they have noticed a positive and encouraging growth in terms of increased segment share, world-class product and new dealer appointments. With global standards in quality, they are a formidable luxury car company in India and on-track to gain a bigger share of the segment.