After nurturing young and talented racers for six years in India, Volkswagen Motorsport India has announced a shift to MMSC FMSCI Indian National Racing Championship for next three seasons of the Volkswagen Vento Cup starting 2016. As part of this new association, MRF will be the new official tyre partner for the 2016 season of this premium one-make series from Volkswagen in India. 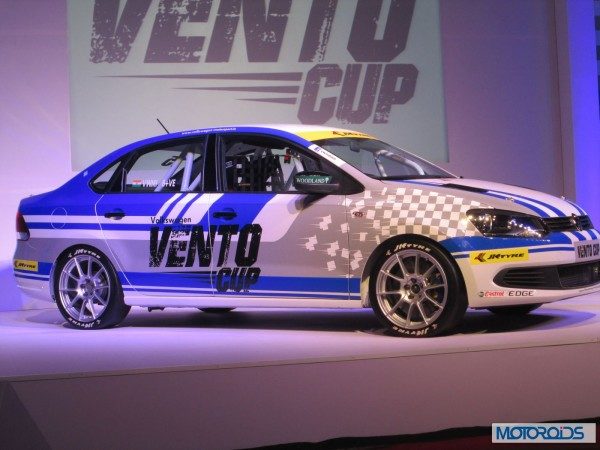 The Volkswagen Vento Cup 2016 will run on the same lines as the previous season with a total of 10 races across four rounds that will be hosted at the three racing circuits in India. In addition to Kari Motor Speedway, Coimbatore and Buddh International Circuit, Greater Noida, where the series was conducting races in the previous season, Volkswagen Vento Cup 2016 will return to Madras Motor Race Track, Chennai as well after a break of three years.

The basic format of racing in the Volkswagen Vento Cup 2016 will remain the same with focus on providing young racing talents a platform for showcasing and cultivating their racing skills. 20 drivers will be seen competing against each other over the championship season for the title honours across Junior and Professional categories.

The new set of drivers for 2016 will be selected through a new and wide-spread programme of go-karting. For the first time, the drivers’ selection will be conducted across seven cities and will commence from 20th January 2016. Interested drivers will have to visit one of the designated seven go-karting tracks and register themselves for the series. Once registered, the participants will have to clock their best time at the respective circuits and send it across to Volkswagen Motorsport India along with the registration form. The top drivers shortlisted from each circuit will then have to come to Pune for the final selection round. The designated circuits for the first round of selections are ECR Speedway (Chennai), Chicane Circuit (Secunderabad), Torq03 (Bangalore), Marina Kart Arena (Chennai), Meco Kartopia (Bangalore), Indi Karting Track (Pune) and Wonder Speedway (Noida).

Commenting on the announcement, Mr. Sirish Vissa, Head of Volkswagen Motorsport India said, “After successfully running our premium one-make series for six years, we are ready to explore new possibilities. MMSC and MRF have a long legacy with motorsport and we are keen to work closely with them and contribute towards strengthening the sport further in India.” He also added, “In 2016, we hope to accomplish the very things that Volkswagen Motorsport stands for – nurturing talent, cultivating racing skills and providing a strong platform for young racers in the country. So far we have nurtured over 75 racing drivers in India and have given international exposure through our global programmes to the champions and we are looking forward to extending this support to many more.”