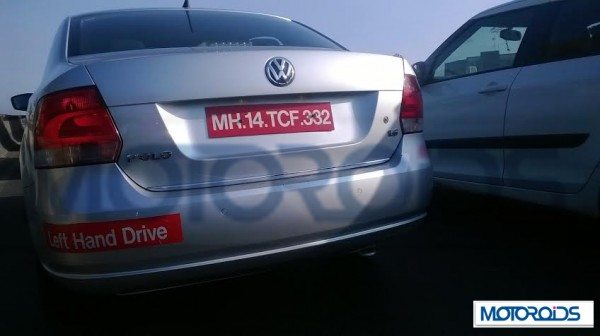 The Volkswagen Vento aka the new ‘Polo Sedan’, which is exported from India to countries like the Philippines, Russia, South Africa and Malaysia has been spotted on Pune-Ahmednagar highway by our friend Omkar Kulkarni.

The Polo sedan is being sold with two engine options in Russia, South Africa and Malaysia- 1.4 and 1.6, both of which burn the unleaded. The Philippines market gets the 1.6 litre oil burner. The car that has been spotted in Pune is a LHD 1.6 litre petrol engine variant.

The 1.6 variant that has been spotted is powered by the same 1.6 litre petrol engine that powers the India spec model. This engine has a max power-torque of 105PS-153Nm. The 1.6 litre engine variant comes mated to a 5 speed manual and a 6 speed automatic transmission. The 1.4 litre variant though, has a max power-torque of 88PS-132Nm and comes mated to a 5 speed manual transmission. This smaller engine variant makes the Polo sedan sufficiently potent to enjoy a 0-100kmph time of less than 13 secs. 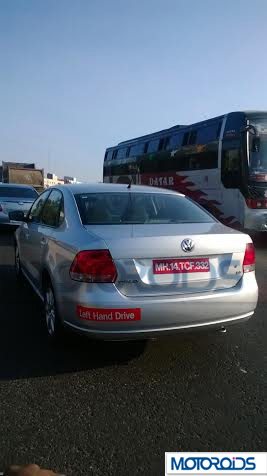 All the variants on sale in Russia come equipped with safety features like ABS with EBD and Airbags. While the new Volkswagen Polo Sedan is available in all the trim levels in most of the above mentioned markets, Philippines gets only the Highline model. Standard features available on Philippines-spec Volkswagen Polo Sedan Highline include- 15 inch mag wheels, ABS, dual-front airbags, four speakers and a music system with a single CD player, USB and AUX-in support. While the India-spec Vento Hihgline comes with a factory fitted auto aircon unit, the Polo Sedan for Philippines gets only a manual deal.