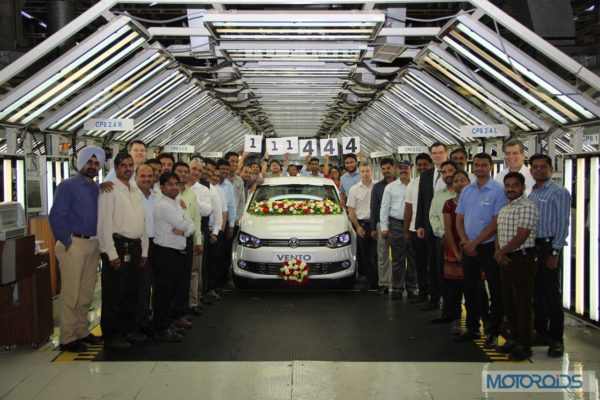 Volkswagen India achieved a new milestone of clocking total production of 111,444 cars in the calendar year 2014 at its facility in Chakan, Pune. Volkswagen Pune Plant achieved an increase of over 11.4% in production in 2014 as compared to 2013, greatly supported by the rising demand from its export markets.

Volkswagen Pune Plant produced a total of 111,444 cars which included the Volkswagen Polo, Volkswagen Vento and Skoda Rapid. With 67,010 number of units, the Vento was the highest produced car of the year followed by 33,547 units of Polo and 10,887 units of Rapid. The export volumes grew by 308% as compared to 2013 and contributed over 59.8% (66,660 units) of the total production. The other highlights for the manufacturing facility were the start of production of the new Polo and the updated versions of Vento and Rapid this year.

Speaking about this new milestone, Mahesh Kodumudi, President and Managing Director, Volkswagen India Private Limited said, “The growth was mainly driven by the export volumes that are being produced at our facility, especially for Mexico. Nearly every second car produced from our plant in 2014 was exported to Mexico. The export activities have helped our plant in tackling the volatilities of the domestic market as well as the currency fluctuations. Exports have helped us in creating a strong second leg of our operations in India. However, our main focus still continues to be on the Indian market which has a great potential to grow in the coming years.”

Andreas Lauenroth, Executive Director – Technical, Volkswagen India Private Limited added, “We have successfully achieved the highest production number at our plant this year without compromising on quality. The high acceptance of our cars to matured export markets such as Mexico underlines the international standards of manufacturing at our Indian production facility.” Commenting on the challenges faced in 2014, he further added, “We managed to shift seamlessly from previous versions of Polo, Vento and Rapid to their updated versions with smooth ramp-ups. This is a clear testimony of the high capabilities of our workforce.”