Home Motorsport Volkswagen flat out at the WRC finale in Wales 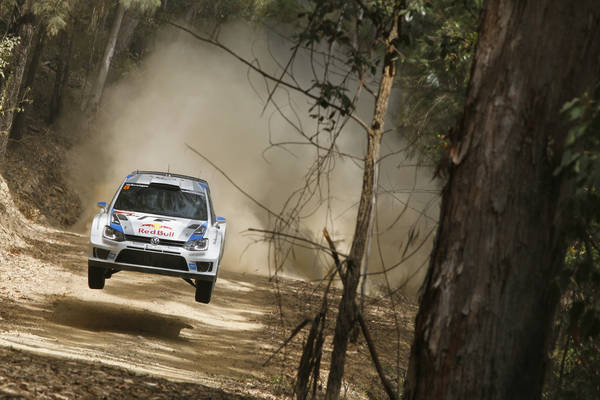 This finale is one that Volkswagen will thoroughly enjoy: the Rally Great Britain in Wales. Despite having won all the competitions in this year’s FIA World Rally Championship (WRC)*, however, Volkswagen will not be taking its foot off the pedal and lines up at the final round of the WRC Season from 14 to 17 November with no less motivation than the team has shown all year. Sébastien Ogier/Julien Ingrassia (F/F), Jari-Matti Latvala/Miikka Anttila (FIN/FIN) and Andreas Mikkelsen/Mikko Markkula (N/FIN) travel to Wales determined to head into the World Rally Championship’s winter break on the back of another strong team performance. The 2014 season gets underway as early as mid-January with the iconic Rally Monte Carlo.

However, before the rally classic in the French Maritime Alps, the World Champions* from Wolfsburg must first face an equally iconic and challenging rally, held primarily on the slippery gravel roads winding through the Welsh forests. Unlike in recent WRC history, this year’s rally will be based back in North Wales. This move also heralds the return of a number of popular special stages. None of the current crop of WRC drivers can call on any experience of stages such as “Gwydyr”, “Penmachno”, “Clocaenog” and “Penllyn”, which last featured as part of the British leg of the World Rally Championship back in the nineties.

“The Rally Great Britain is a prestigious round of the World Championship, which every one of the drivers wants to win,” said Volkswagen Motorsport Director Jost Capito. “The conditions are unlike any of the other WRC rallies and pose a whole host of challenges. We have won nine of the twelve rallies so far, and would love to use that momentum to take a tenth winner’s trophy back to Wolfsburg with us. Every single member of the team is up for the Rally Great Britain, and looking forward to a successful end to the season, without the added pressure of battling for the World Championship.”

Having won the past two rallies in Wales, they are now gunning for their third coup in succession: Jari-Matti Latvala/Miikka Anttila face a huge challenge with the Polo R WRC. The Finnish duo has set its sights on overtaking Thierry Neuville/Nicolas Gilsoul (B/B, Ford) in the overall standings at the season finale, and in doing so climbing into the runner-up spot in the Drivers’ and Co-Drivers’ Championship at the last minute. To pull this off, Latvala/Anttila must make up 14 points on their rivals – with a maximum 28 points up for grabs. Even if the duo were to triumph at the Rally Great Britain and win the Power Stage, for which additional points are up for grabs for the first three, they would still be dependent on other results going their way. With this in mind, their own Volkswagen team-mates Sébastien Ogier and Andreas Mikkelsen could offer valuable assistance.

Many of the special stages used in 2013 will be new territory for the current crop of WRC drivers, and yet they are integral to the history and reputation of the Rally Great Britain. Take the “Great Orme” special stage, for example. It takes the drivers along a winding road, right on the coast. Possibly the greatest difficulty is that this stage is tackled on the gravel tyres, although it is one of just two asphalt stages on this year’s Rally Great Britain. Furthermore, the route is lined by high, unforgiving kerbs – one mistake is enough to damage the suspension, and could mean a premature end to the very last stage of the year.

Over 32 kilometres long and a true classic: “Hafren”. The route starts out in the town of Hafren and initially heads uphill through thick forest. The trees are often shrouded in mist for long periods and the route becomes greasy and slippery when it rains. The middle section of the special stage is faster, with long corners winding their way through grass and moorland. Another rally icon is the “Sweet Lamb” special stage. Water crossing, jump, hairpin – and all within a section of no more than 500 metres. The spectator zones offer great views of almost the entire area, which is usually used for rally driving courses. This provides a great opportunity to compare the different driving styles on show.

This gesture is in recognition of the fans: Andreas Mikkelsen and Mikko Markkula will line up in Wales with a special livery on the number 9 Polo R WRC. Almost 4,000 photos of fans, gathered from the Internet, will adorn the 315-hp World Rally Car from Wolfsburg. The fans accompanying Mikkelsen as extra “co-drivers” in Wales can go online to zoom in on their photo, and can view the Polo R WRC from every perspective in 3D in the Fan-Look section.

Quotes ahead of the Rally Great Britain

Jari-Matti Latvala, Polo R WRC #7
“The Rally Great Britain is like a second home rally for me. I made my first start in the World Rally Championship in Wales in 2002. Despite the weather, which is often poor and challenging, I have very fond memories of the rally. The layout and rhythm of the stages are unique. I like quick routes – and this is definitely a quick rally. Sometimes you hope it will not be too slippery and muddy in Wales. That can sometimes be very tiring. This season the route is more to the north of the country, unlike last year, when we were primarily driving in the south of Wales. In the north there are more winding stages, which also makes them more technically demanding. On the whole, the special stages in the south were faster. I am really looking forward to the rally and can take a very relaxed approach. I would obviously like to be in contention for a podium, especially as second and third place are still up for grabs in the Drivers’ Championship. However, the most important thing is that we are not under any pressure, as we have already won the Manufacturers’ Championship*. I will drive as quickly as possible and just enjoy the final rally of the season.”

Sébastien Ogier, Polo R WRC #8
“I am sure we will enjoy the Rally Great Britain, as it is the first event of the season where we do not feel any pressure at all. No tactics, just full throttle from the word go. Volkswagen has won the Manufacturers’ title, and Julien and myself have secured the Co-drivers’ and Drivers’ Championship. The rally has never been my favourite, but with more and more experience my confidence to approach this rally is growing. Some features are not very welcoming: low temperatures, rain, fog and muddy roads through the Welsh forests. I know that this sounds like ‘rally paradise’ for my team-mates – and I have to agree with them. There is probably no better way to end a rally season with a win in Wales. So that’s my goal.”

Andreas Mikkelsen, Polo R WRC #9
“The Rally Great Britain is obviously a special place for me. I was just 17 when I started driving in rallies. However, I gained most of my experience the following year and in 2010, when we won the SWRC in Wales. There are a few new special stages awaiting us. However, that really plays into my hands – especially the ‘Great Orme’ special stage, which returns to the itinerary this season. We have held the record for this stage since 2006. It is a great feeling to return to this special place. The most difficult aspect is the weather conditions. The air is cold and damp, and there is a lot of rain. It can soon get colder than expected there, and can sometimes even be frosty. I hope we will avoid any snow this year. Generally speaking, the way the ground conditions change so rapidly makes the rally very tricky. We drivers need to show a really good touch to cope with this. It would be fantastic to end the season with a good result. I feel more at home in the Polo R WRC now than ever before.”