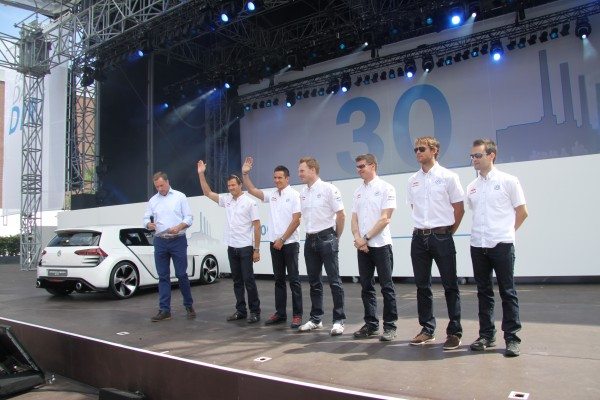 Over 100,000 employees in Wolfsburg celebrated the 30 millionth Golf in the presence of Prof. Dr. Martin Winterkorn, Chairman of the Board of Management of Volkswagen AG. Among them were the three Volkswagen driving pairs from the World Rally Championship (WRC). Together with stars like DJ Ötzi, Andreas Bourani and Earth, Wind & Fire, the Volkswagen drivers took the main stage to reveal their own personal Golf stories. While World Championship leader Sébastien Ogier was able to call a Golf IV Gti his own, Miikka Anttila has a first generation Golf Gti in his garage. From the ‘party mile’ in Wolfsburg, the six Volkswagen drivers and co-drivers set off straight to Sardinia, where the next round of the World Rally Championship takes place next weekend.