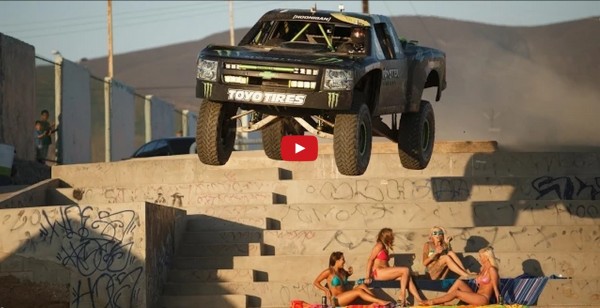 In this video by Monster Energy, Baja 1000 champ BJ Baldwin and his 800+ bhp trophy truck show some mighty acrobatics as they speed from the outskirts of Ensenada, Mexico, to a seaside party within just 20 minutes in an attempt to win a bet set by his friend, international playboy and InstaGram hero, Dan Bilzerian.

Jumping over bikini clad babes and intersections, going sideways in the sand,Baldwin redefines hooliganism in Recoil 2. And of course, all of this is captured in gratuitous slow motion- a fine demonstration in automotive stunting and flim-making!

Brian Scotto, creative director of Recoil 2 and chief brand officer at Ken Block’s(of Gymkhana fame) company Hoonigan , said: “I had always wanted to see BJ’s Trophy Truck taken out of its natural environment (the desert) and allowed to thrash through an urban setting.”

“We realised the best location was right under our noses – the start of the Baja 1000 (an event BJ has won back to back 2012-2013). The city of Ensenada loves off road racing and especially BJ Baldwin. It offers a great hilly landscape that provided us with excellent jumps and drop offs, as well as a great mix of tarmac and dirt roads to vary the feel throughout the film,” he added.