Home News Video: Vettel and Webber slug it out in Infiniti sedans at Nurburgring! 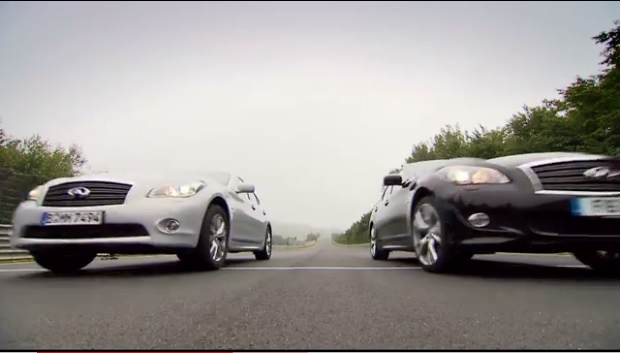 German GP is over, with Hamilton having trumped the home boy Vettel. However, Renault-Nissan, the power behind the Red Bull Racing cars which have been dominating the F1 races this season didn’t miss a chance to put their star drivers behind their cars, and create some excitement. Brand chosen was Infiniti – which is the luxury-cum sports arm of Nissan, and the two drivers were put in Infiniti Ms. There was a little catch there though. While Vettel was behind the wheel of the hybrid M35h, Webber got the M37 sport. Both were let loose on the Nurburgring Nordschleife or the Green Hell – the most respected racetrack in the whole wide world.

The team mates, currently leading the Formula One World Championship, were given the keys to a 3.7 litre V6 Infiniti M37s and an Infiniti M35h – Infiniti’s most powerful car to date and the fastest accelerating production hybrid in the world. They competed for one high speed lap around the legendary 14 mile (22.8km) track.

Now these are two different cars, with different characters, and of course different capabilities and behavior around the track. Right at the outset it’s clear that the weapons given to the two warriors were not equally lethal. On paper, the hybrid variant is quicker. So what was the outcome? Well, we have every reason to believe that the whole exercise was scripted, and the final results don’t matter. But it’s interesting to see the two racers battle it out nonetheless. Check them out!