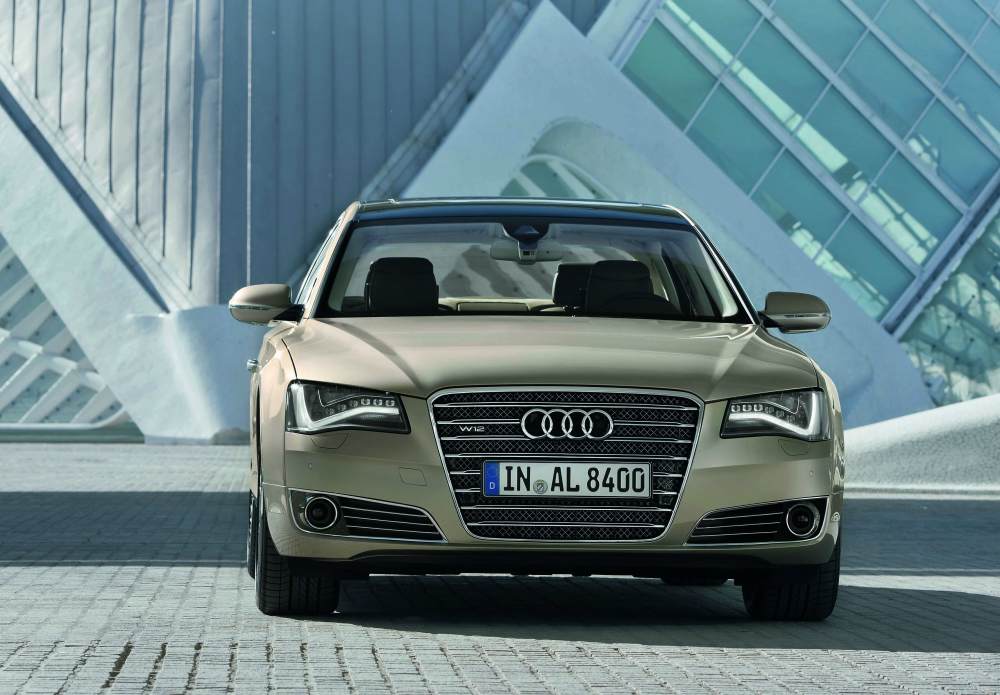 Discuss this topic in Motoroids Talks

Audi has introduced the new Audi A8 L W12 quattro – the top version of its flagship model. Equipped with a powerful 6.3 FSI petrol engine, the newest variant of Audi’s flagship boasts a whopping 500bhp and equally astonishing 625Nm of torque at 3250 rpm. That sort of power is good to propel even this mammoth of a machine from 0 to 100 km/h in a mere 4.7 seconds to effortlessly reach its electronically limited top speed of 250 km/h. The new Audi A8 L W12 will be priced at INR 12,656,000 (ex showroom Maharashtra).

Mated with that terrific engine is the eight-speed tiptronic tranny which shifts smoothly and quickly, with the individual gears closely spaced but with a generous overall spread from low to high. Gear shifts are performed electronically (“shift by wire”) from an elegant yacht-style selector lever or at steering wheel paddles. Equipped with a permanent all wheel drive Quattro, the new A8 on 19-inch alloy wheels with a 15-spoke design reserved for this model, with size 255/45 tires.

So how do you distinguish is luxo rocket from its lesser variants? Well, the radiator grille (sporting the W12 badge) with a high – gloss black paint finish and special chromed horizontal bars takes the lead to start with. Then there are chromed inserts of new design in the air inlets and on exterior mirrors. There is a W12 badge at the rear as well, and then those two trapezoidal-pattern tailpipe trims neatly integrated into the rear bumper re simply unmistakable.

The back seat is much more spacious than the standard version. Rear passenger comfort can be enhanced even more with rear seat executive package (optional). These can be heated, ventilated and adjusted in a variety of ways. There is also a fully adjustable lumbar support.

Between the individual rear seats, a full-length console can be ordered (optional); it can be specified with items such as a folding table or a refrigerator. Separate controls for the rear air conditioning are also standard. The luxury four-zone automatic air conditioning is controlled by no fewer than 25 adjusting motors.

A reclining seat behind the front passenger’s seat with massage functions, heating, ventilation and the luxury head restraint are integral features. A folding table, a refrigerator and a Rear Seat Entertainment system with two 10.2-inch screens are some other top-end luxury features.

Another optional extra, the panoramic sun roof, has two glass panels that allow plenty of light to reach the car’s interior. The standard Bang & Olufsen Advanced Sound System has an output rating of more than 1,400 Watts and 19 speakers. A Rear Seat Entertainment system with an MMI control panel on the console between the rear seats, provides access to all the infotainment functions on board.

Then there is the night vision assistant which uses a thermal imaging camera to identify persons on the road ahead. If it considers the situation to be potentially dangerous, the image of the person on the road is shown in red and a warning signal is heard.

“We have adopted an aggressive growth and product strategy this year with the launch of a series of class-defining models, beginning with the Audi A8 L, the super sports cars, Audi R8 V10 and Audi R8 Spyder, the design marvel, Audi A7 Sportback and the high performance Coupé, Audi RS5. We continue to be the market leader in the luxury SUV segment in India with Q5 and Q7 and in the super sports car segment with iconic R8. Globally too, Audi continued to maintain its No.1 position in Europe and China and is the fastest growing luxury car brand in USA and India. While China has overtaken Germany as the single biggest market for AUDI, we are also deploying some proven strategies from China to the Indian market, such as our product offensive, qualitative network growth and strong brand building process”, saidd Michael Perschke, Head, Audi India.