Home News VIDEO: Riding gear saves a biker after he gets stuck underneath a pick-up truck and is dragged along 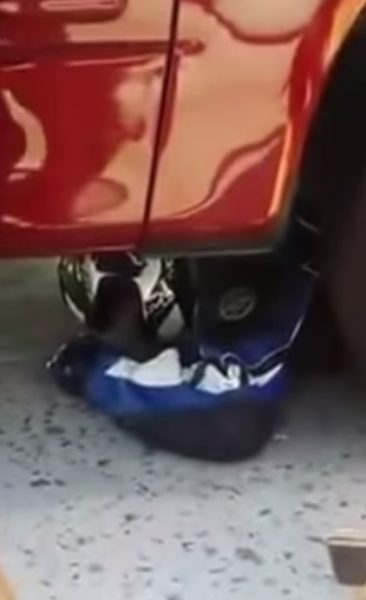 He was stuck there being dragged along, while passersby thought it was the front bumper of the pick-up. It was only until someone who was two lanes away noticed that a bumper couldn’t have moving legs and brought the vehicle to a halt. How did the motorcyclist get there? He came off the motorcycle for sure, but some say he was pushed. Thankfully, it was rush hour, traffic was moving at snail pace and the lucky man was wearing his riding gear.

While as bikers we often curse car drivers, after bringing the pick-up to a halt, a lot of them borrowed jacks to lift the rear axle and rescued the motorcyclist. The man must’ve thanked his stars and his common sense to gear up, as when he got to the hospital, it was only minor scrapes and bruises he needed treatment for. Here’s a reason why you shouldn’t skimp on wearing your riding gear even in this searing heat, even if it means the ride is for a short distance. You never know where you might find yourself stuck, praying to be noticed and rescued.