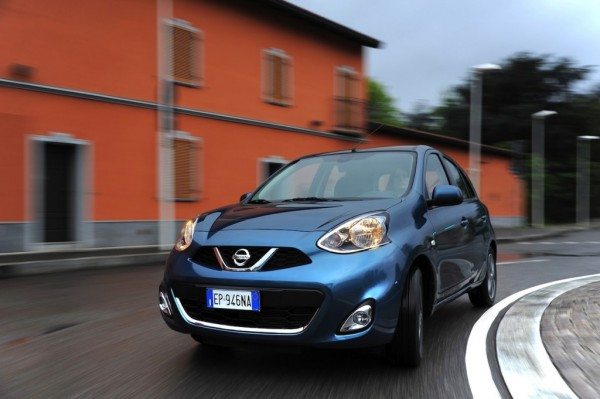 The Europe/India spec Micra facelift comes with a front fascia that is dissimilar to the one on the Thai spec car. The revised front end consists of a new bonnet, headlights, bumpers, grill and the fog lamp housings. The only change at the rear is inclusion of new LED taillights. The Micra facelift also gets new 15-inch alloy wheels, with an option to select 16-inch machine finished alloy wheels. The car also gets two new exterior paint options– Pacific Blue and metallic Platinum Sage.

On the inside, the new 2013 Nissan Micra facelift for Europe comes with a revised centre console and new design air vents on the centre of the dashboard. The centre console comes draped in a shade of glossy black, with the gear level getting some faux silver garnish. The interiors also get updated upholstery and USB and Aux-in support.

The car will also benefit from an updated Satellite Navigation system that has a larger 5.8-inch screen. The car also gets a Parking Slot Measurement system that helps the driver with parking the car.

The India spec car is expected to continue being powered by the same set of engines. This means that the petrol variant will be powered by a 75bhp 1.2-liter 3 cylinder petrol engine and the diesel variant will use the popular 65bhp 1.5 litre Renault sourced K9K four pot oil burner. The petrol variant is also expected to get a CVT automatic transmission with the facelift. The Euro spec Micra facelift will also get a supercharged 1.2-liter engine with an automatic Stop/Start system.