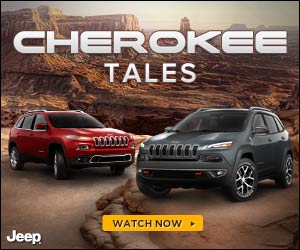 We reported in detail when the 2014 Jeep Cherokee was revealed earlier this year. As we told you back then, new 2014 Jeep Cherokee comes in four variants- Sport, Latitude, Limited and the Trailhawk. The Trailhawk is an off-road-focused variant which gets one inch of more clearance, improved approach and departure angles of 30 and 32 degrees respectively, and three bright-red tow hooks (with each rated for 8250 pounds.)

Jeep has now come up with a new video campaign that shows the 2014 Jeep Cherokee Trailhawk taming the brutal Hell’s Revenge trail in Moab, UT.

The power options for the new Jeep Cherokee include a 2.4-liter four-cylinder Tigershark unit with a max power of 184 bhp and a 3.2-liter Pentastar V-6 engine with a max power of 271 bhp. Both the engines are mated to a nine-speed automatic transmission. The new Cherokee is based on a modified version of the Dodge Dart’s platform. The Dart’s platform, in turn, has been sourced from the Alfa Romeo Giulietta.

It is being said that the new Jeep Cherokee’s styling is loosely based on that of the Fiat’s Alfa Romeo brand of cars. Here is what a WSI report says:

“The 2014 Jeep Cherokee, which makes its debut Wednesday at the New York Auto Show, is based on a design first developed for Fiat’s Alfa Romeo—a sharing intended to spare Chrysler hundreds of millions of dollars in engineering costs and shorten the time it takes to get new vehicles to market,”