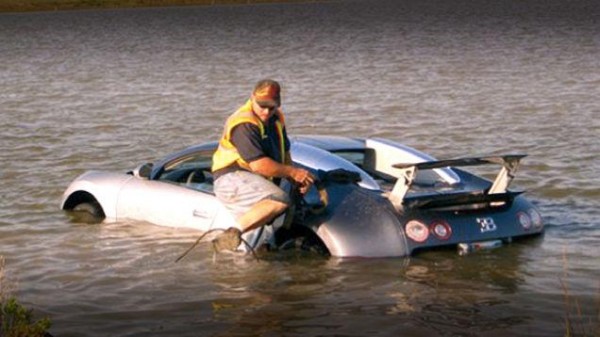 Insurance premiums, nowadays, are really high and people are always trying to find ways to claim their policies before the expiry date. But things turned ugly when a Bugatti owner tried to claim USD 2.2 million from Philadelphia Insurance for his crashed Veyron. Andy House, owner of Performance Auto Sales, an exotic car salvage yard, faces 20 years in prison for purposefully crashing his USD 1.6 million worth Bugatti Veyron into a Texas lake in 2009.

House, who was driving next to a lake in Texas, said that a low flying pelican caused him to turn the car and crashed into the lake. However, a video capturing the entire episode surfaced on the internet in November 2011 which showed that there was no pelican in the entire scene which was claimed to have caused the accident. House changed his statement and later said that he dropped his phone while driving which cause the accident to happen.

Philadelphia Insurance sensed foul play and sued House for insurance fraud, claiming that he had crashed the car intentionally to collect on the $2.2 million policy. The company also claimed that House had bribed someone to steal the car and burn it so he can claim the insurance. The trial which was supposed to have started yesterday has been postponed for unknown reasons. If the fraud case is proved, House faces 20 years in prison.

It is a heartbreaking sight to see such a beautiful piece of engineering getting treated like this. Do you agree with us? Share your thoughts through comments below.