Audi has been testing the 2015 R8 since a couple of months now and the car is undergoing its last phase of testing. Now, an Audi R8 V10 test mule has been caught on video doing the runs on the legendary Nurburgring racetrack.

The 2015 Audi R8 will ride on the same platform as that of the Lamborghini Huracan. The flagship sportscar from the Ingolstadt based car maker won’t look that much different compared to the current model as the designers have planned to make it a bit sharper while largely keeping the same appearance. The second gen 2015 R8 is expected to weigh up to 59 kg (130 lbs) less than the model it replaces and will adopt a very subtle evolutionary design enhancing the car’s sharp looks. 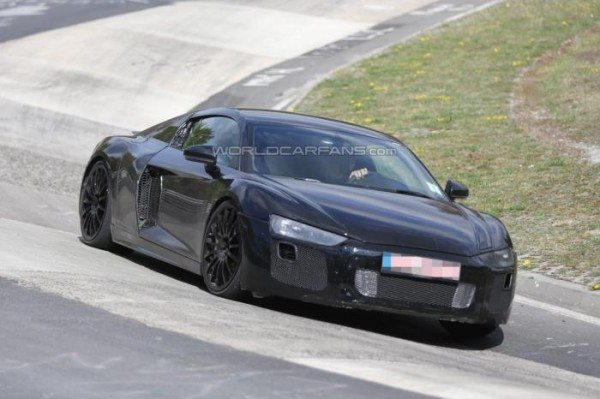 On the interior front, the sportscar is likely to be equipped with the 12.3-inch customizable digital instrument cluster from the third-gen TT and should also feature more metallic accents and an updated three-spoke steering wheel.

Upon its launch, the second-gen Audi R8 will be offered with the familiar naturally-aspirated V8 4.2-liter and V10 5.2-liter engines but most likely these will be updated to belt out more power. Later during the car’s lifespan, Audi will be equipping the car with a smaller turbocharged gasoline engine. All of these engines will be connected with a seven-speed dual-clutch transmission sending power to the Quattro All Wheel Drive system.

The model will allegedly be revealed in the months to come and we can expected it to be showcased at the Paris Motor Show in October this year. Deliveries are slated to kick off early next year.