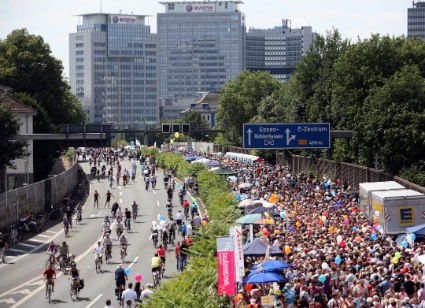 Germans love to party and party in style they do! Last Sunday night the grand party was staged out on a highway! And not just any highway, but the ever famous German Autobahn which was closed to auto traffic on a 60 kms portion between Duisburg and Dortmund to make way for 3 million party hoppers of which about a million came to the party on bikes.
And to make the mayhem just a tad bit comfortable, the party organizers lined up some 20,000 tables and 40,000 benches which were assembled by 140 forklifts and 50,000 helpers to create the world’s longest table! Oh, and there of course were some 100 cooling trucks to serve chilled drinks!
The event titled, ‘Still Life’ is a part of a wider culture festival celebrating the Ruhr region caused by the European union and this year the ‘EU’ choose, ‘Autobahn’ as the ‘European Capital of Culture 2010.’ As a result, the road on which automobiles easily averaged speeds to about 130 km/hr on any given day, boiled down to zero as party goers occupied seats on the 37 mile table.
News
,
Comments
Leave a Reply Cancel reply