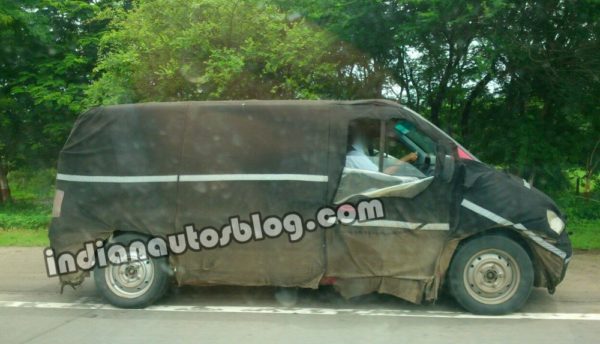 It is pretty much a well known fact that Indian auto manufacturer Force Motors is busy developing a new MPV that it plans to launch early next year.

We have already posted many details and spy pics of the upcoming Force MPV and now, the upcoming vehicle has again been caught testing, this time on the Mumbai-Pune expressway.

The upcoming Force MPV is based on the Mercedes Vito van, which was on sale in many countries from 1996 to 2003.

The Mercedes Vito derived Force MPV is expected to be powered by the same 2.2 litre FMTECH diesel engine that powers the One SUV. This Mercedes derived motor has a max power output of 140PS and has a good torque spread. The base variants of the Force MPV could get a smaller 129 PS 2.2 litre BS3-compliant diesel engine. This smaller diesel motor currently powers the Traveller.

The upcoming Force MPV would be a 9-11 seater and could come in various variants depending on the seat layout. The MPV won’t compete with the Toyota Innova or the Nissan Evalia as it would be much larger in size. We expect the upcoming vehicle to be priced around INR 10-12 lakhs.

Go to next page for more pics of the Force MPV