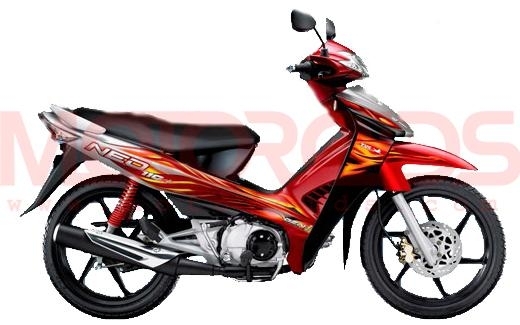 We were the first to reveal the possibility of the TVS Neo coming to India. Well, he country’s third largest two-wheeler maker will be launching the Neo by the end of this year. The Neo is currently produced in Indonesia and sold as a step-through in the South East Asian market. The step through will also feature an automatic clutch along with a rotary gearbox. This won’t make it mandatory for riders to pull the clutch every time they change gears.

TVS has been contemplating for the last few years about launching the Neo in India. The Neo had been showcased by the manufacturer at the 2008 Auto Expo. In fact, a few disguised Neo mules have been spotted undergoing routine testing in and around the company’s Hosur plant. The manufacturer even raced a few Neo’s at FIM Asian GP round held last month in Chennai.The Neo sold in the Indonesian market is powered by a 110cc engine producing 7.5bhp.  It also comes equipped with a 220mm front disc and five spoke alloy wheels. To attract buyers it also features stylish body graphics. The carburetted version of the Neo will be sold here unlike the Fuel Injected one sold abroad. It is likely to feature bigger wheels, forks and gas charged suspension at the rear enabling it to gently glide over our pothole infested roads.

TVS riders on Neo’s were in action at FIM Asian GP round held last month in Chennai.

The critical factors in deciding the Neo’s success will be its pricing and fuel efficiency. TVS will position its step through in the entry level executive segment. We reckon that if the Neo is priced around the Rs.40,000 price bracket, it will become a mark on the sales chart. TVS  won’t be the first two-wheeler manufacturer to offer a automatic clutch motorcycle. Hero Honda had first launched its Street which allowed riders to engage clutch less gearshifts. Bajaj had launched the M-80 which did gain some popularity among buyers. Kinetic had also launched a step through christened K4 100. Step through’s never managed to take off in India in a big way though they were popular among women riders and rural folk.