Motorcycle motorsports come in many forms – Road Racing, MotoCross, Trail Biking and others. But nothing comes close to stunting when it comes to excitement and being a spectator sports. It’s the T20 of the motorcycle sports world. But the irresponsible bunch stunting on public roads has given notoriety to this art form. However, with increasing awareness about safety and opportunities to perform in closed, controlled environment, stunting has gained some respect and caught attention. 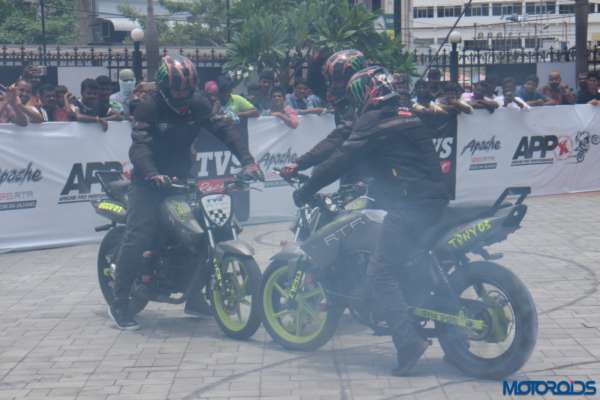 TVS has been at the forefront of motorsports on two wheels with their own racing team in both motocross and road racing. They have also been supporting motorcycle stunting as well. They decided to make their mark in this field by arranging for the longest stunt show in India’s recorded history – five hours of non-stop stunting. This feat has been acknowledged by the India Book of Records. The record was set during TVS Apache Pro Performance X. 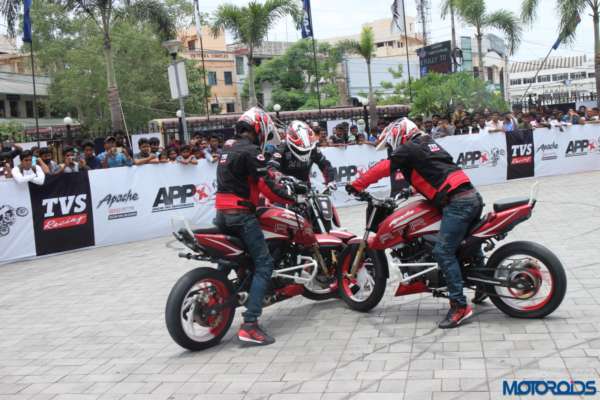 Anyone who has witnessed stunting would concur that it is not easy for any individual to perform for five hours. So what TVS Racing did is have five professional stunting teams to perform in succession. The five hours had 15 slots of 20 minutes each and the five teams performed three times in a rotational manner. All teams were supported by TVS Racing.

Let’s get to know the teams:

Team Balance Point Performance – Team Bangalore is one of the oldest stunt riding teams and has performed in over 300 stunt shows across the country, including a performance with five times World Champion stunt team ‘Chris Pfeiffer’. The team has also trained the Indian Army for the stunts performed at Rajpath on the January 26, 2017 (Republic Day) in New Delhi on the TVS Apache RTR 180. The team has five members.

Team Throttle Extreme – Team Indore is a professional freestyle bike stunt riding team which has performed in over 500 stunt shows in educational institutions. The team holds a Guinness World Record and has participated in the popular talent hunt show ‘India’s Got Talent’ in 2011 as the show promoter. It comprises three motorcycle riders, two bicycle riders along with five support staff.

Throttlers – Team Coimbatore is a freestyle stunt riding team and has performed in over 250 stunt shows across the country. The team has also performed with Freestyle Stunt Riding Champion Chris Pfeiffer during his India Tours in 2010 and 2011. This is the first team in India to perform drop Wheelie (without front wheel). The team has done over 150 stunt shows for the TVS Apache RTR. The team has over 50 members with seven pro riders and 10 rookies.

Steel Silencerz – Team Jaipur is a freestyle stunt riding team and has performed in over 160 stunt shows across the world. It is the first Indian team to perform stunts on international platforms. The team has performed at the Eurasia Moto Bike Expo 2014-15 in Istanbul. This team has also performed stunts for the Indian Army in Jabalpur. The team comprises of three experienced riders. 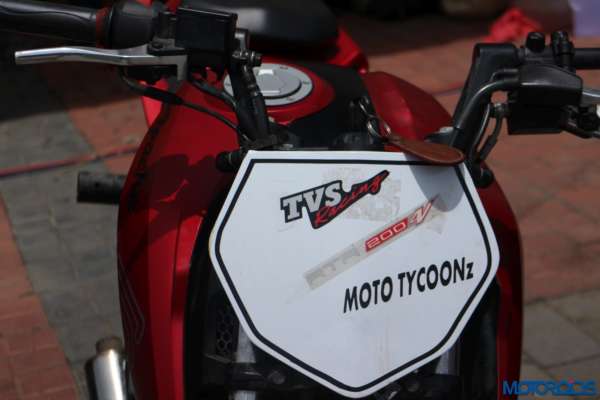 Team Moto Tycoonz – Team Delhi is a freestyle stunt riding team and has performed in over 150 stunt shows across the country. They are the youngest team performing today. The team comprises of three experienced riders. 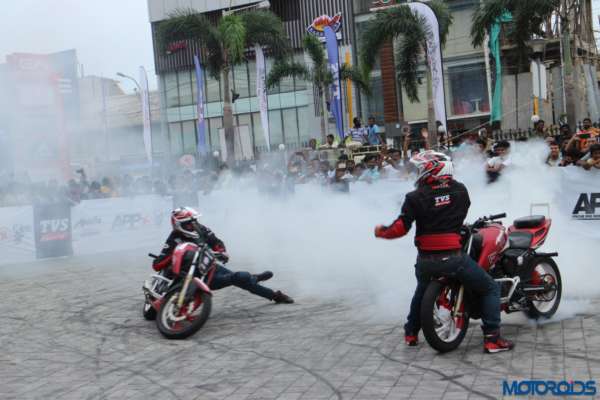 The teams prepped their bikes, and started practicing around 10:30 AM. All riders were sweating profusely under their riding gear. But they would rather sweat than bleed. Despite the smeltering heat of Chennai, the show started exactly at noon with Team Jaipur doing the first 20 mins. Riding Apache RTR 180’s, they gave a great show to a large crowd gathered to witness the record. The whole environment became a cacophony of sounds from loud free flow exhausts, music playing on large speakers and the emcee talking. Add to this the cheering from the crowd. However, while it was a cacophony in the ears, it was mesmerizing for the eyes with the three bikers coordinating their stunts and giving a great show. 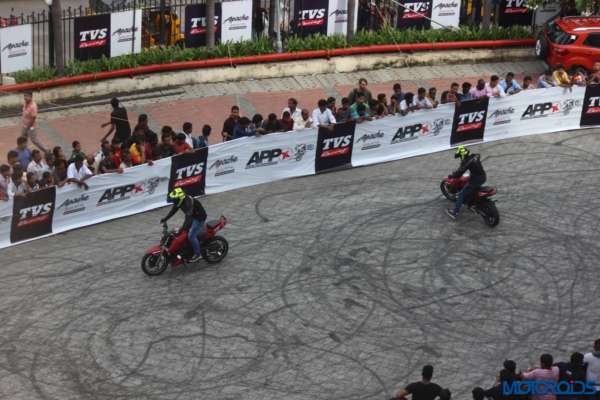 After 20 mins, the second team entered as soon as last rider was exiting the arena. The show went on with great precision with teams being ready to enter the arena atleast five minutes before their start time. I can barely stand at a red light under my full gear and these guys were more than happy to be part of it all. Each team had their own style. Among the five teams, just one were riding the RTR 180 while all the others had the new RTR 200. 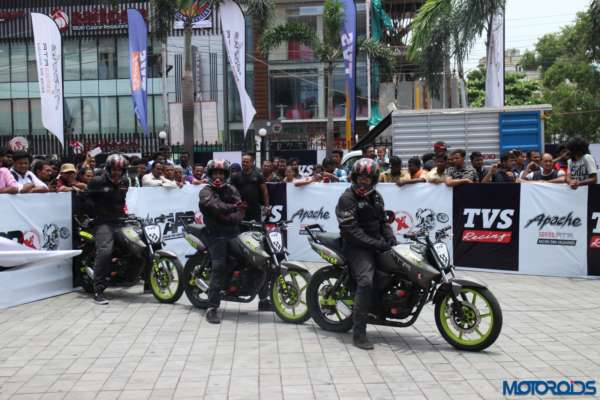 Now, remember that while we are used to riding our bikes for several hours in a day without a hitch, we ride them in a fashion which does not stretch the components too much. However, when stunting, there is a lot of stress on several of the components. There were minor falls which can break the levers and rearsets. However, with expert mechanic team from TVS providing the support, the bikes were tended to between the sessions with mechanics working in frenzy to fix broken parts.

Riders quickly grabbed some packed food and downed glucose and water to keep the fatigue away. The crowd did not thin out despite the heat and neither did the enthusiasm of the riders. As the clocked neared five hours of continuous stunting, the show came to a close but the environment was of excitement and enthusiasm. For the encore, all five teams, came into the arena and performed a group burnout. The smoke and smell of burning rubber created a cloud so thick we could barely see the bikes anymore. 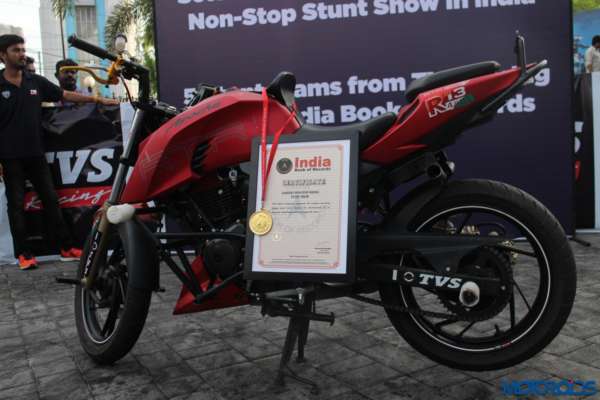 The feat was recognised by India Book of Records and certificate handed over to the TVS Racing and individual certificates to the riders. Having covered some races and several other events, I must say this one was one of the most exciting and I had a great time there.