The Salt Flats of Bonneville have been synonymous with top speed runs and land speed records. Needless to say, Triumph, though a British brand chose this legendary name for a fabulous motorcycle. However, the Brits being Brits, were not satisfied even after building a beautiful, classic, refined and very practical bike. A bunch of them went for a couple of cold ones to a pub one day and thought – why not start selling factory customs? We couldn’t have seconded them more. 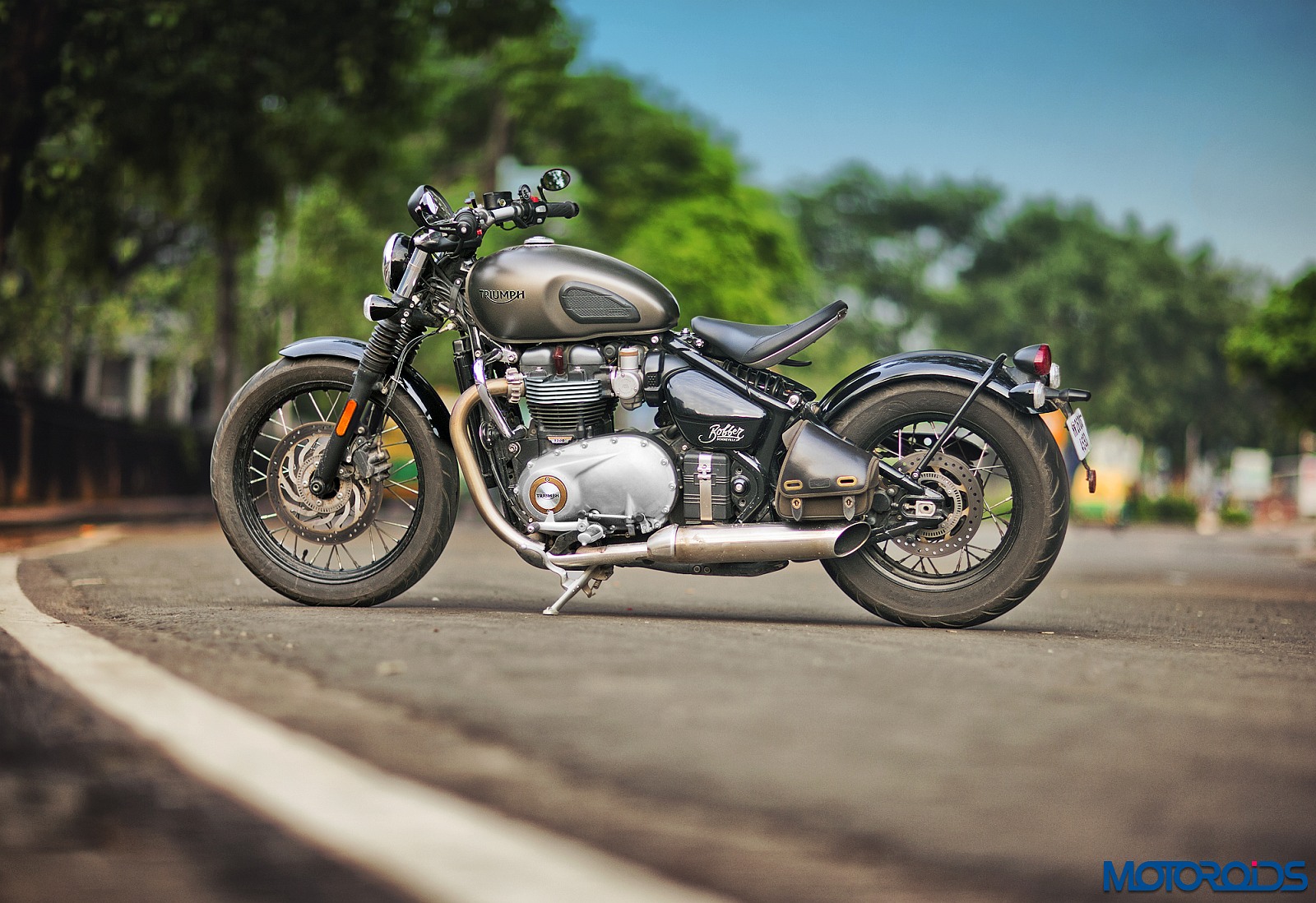 Custom bikes are all the rage worldwide and customisations come in many forms. One of them being a Bobber – where the bike is stripped of any unnecessary weight, is given a soft or even a hard tail, gets its front fender removed and wheelbase reduced. While the original purpose to strip these machines was to make them lose the extra pounds to go faster, modern bobbers do so more as a nod to the classic, minimalistic styling. The Bonneville Bobber, too, focuses on appearing lean, not for creating any records, but more for evoking a feeling of the much sought classic minimalism. And boy, does it succeed! Let’s take a closer look.

Triumph took their very popular Bonneville T120 and gave it a whole new look along with a retuned engine. To make their intentions about the stylistic treatment they planned for the motorcycle very clear, they named it the Bobber. So, what are the modifications made to the T120, you might ask? Quite a few! So much so, that unless someone points it out it would be difficult to find any similarities between the two siblings. 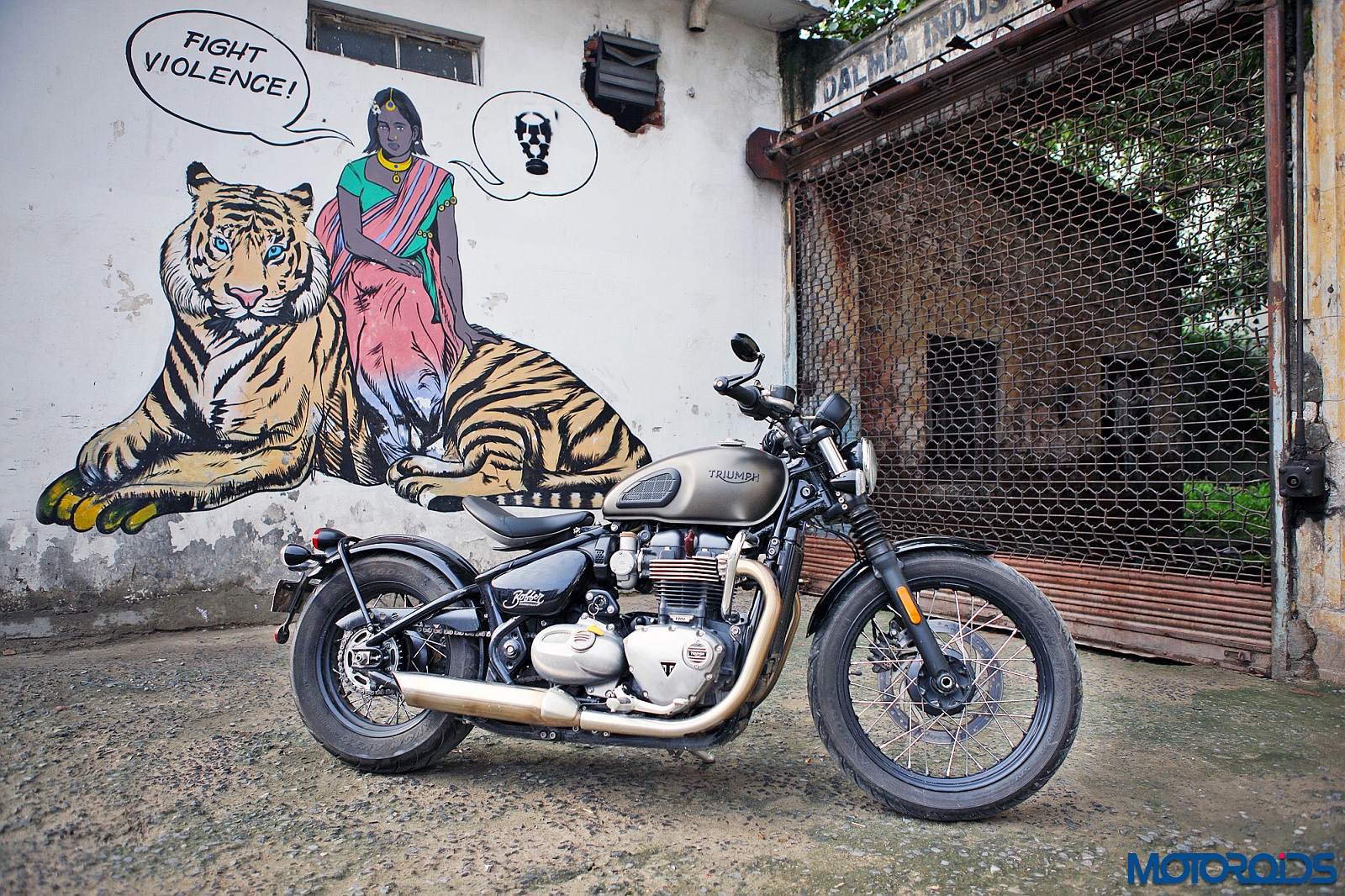 The essential brief with the Bobber is to look good. Now, being a motoring journalist, I keep riding several motorcycles and share their images on social media from time to time. However, when I posted the picture of the Bobber on one of the social networks, many of my friends actually called me to tell me what a beautiful bike it was. It does look desirable from every angle. The low single seat stance lends it a very distinctive appearance.

There’s beauty in every detail of the Bobber. Starting from the very front, the Bobber gets bigger 19 inch spokes instead of 17 inch ones on the T120, the suspension is also changed with just 90 mm of travel instead of 120mm on the T120. Bobber gets a new headlight cluster and a new speedo console, which can be adjusted. 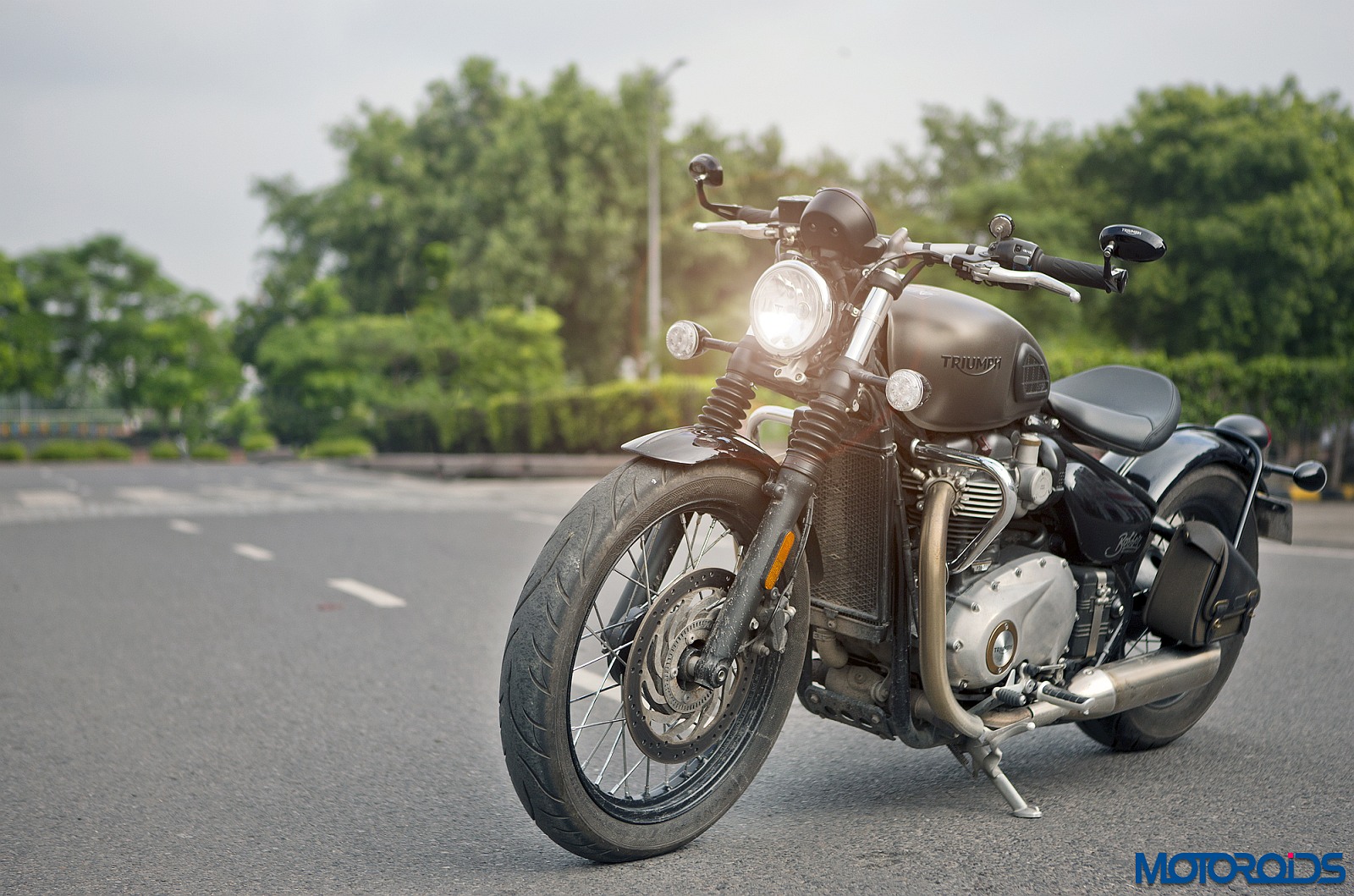 You get a more sculpted fuel tank with knee recesses. However, the capacity of the fuel tank is reduced considerably to 9 litres instead of the 14.5 litre tank on the T120. This seriously limits the range of the bike and may an issue for those who wish to take it out for longish rides. With an efficiency of about 17 kmpl that tank capacity translates into a sub 200 km range – which isn’t much.

You can see the beautiful parallel twin engine right below the fuel tank. I personally love the finish on the cylinder fins. A beautiful motif reading 1200HT adds to the finesse and detail of the beautiful engine. Then you see the well crafted carburettor which adds to the classic look. Now don’t go about adjusting the screws on it as it’s a fake. This is a fuel injected bike and the dummy carb is there to preserve the retro look. 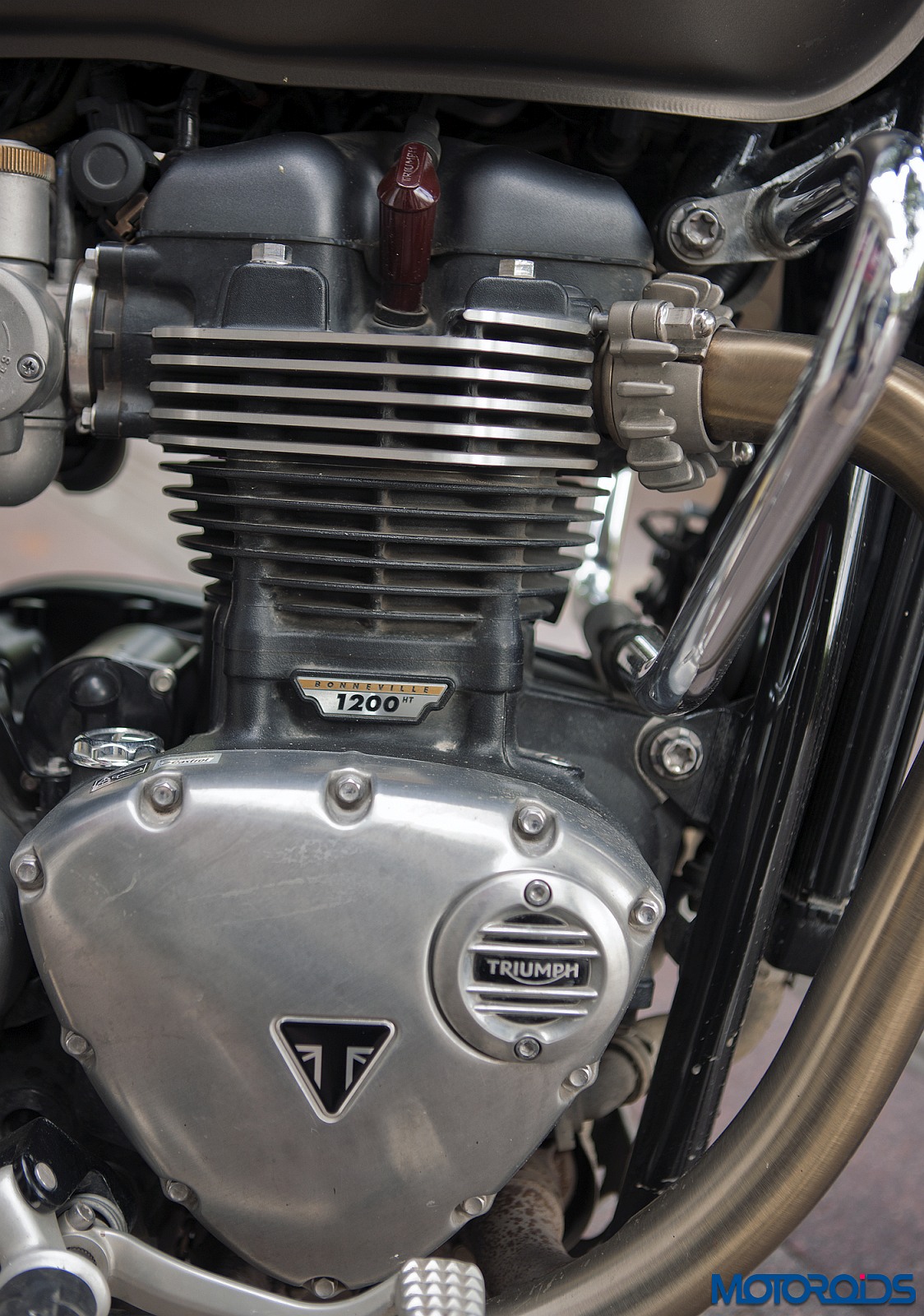 The cylinder sits on a beautiful, smooth-looking block with a Triumph logo adding to the detail. The bike has great detailing all across its bodywork. The side covers are new as well with a nice Bobber Boneville sticker and battery box right below it.

Let’s get to the most distinctive feature – the seat. The Bobber gets a beautiful floating seat which really meshes with the organic curves of the bike. It can be adjusted for height and reach. Neatly tucked under the seat is the monoshock. Well hidden mono shock gives the Bobber a hard-tail look. Talking about the rear suspension, you have to trade comfort for looks. The travel is now reduced to just 76.9 mm instead of 120 mm of that in the T120. And we do have to admit, it does make the ride rather hard. More on that later, though. 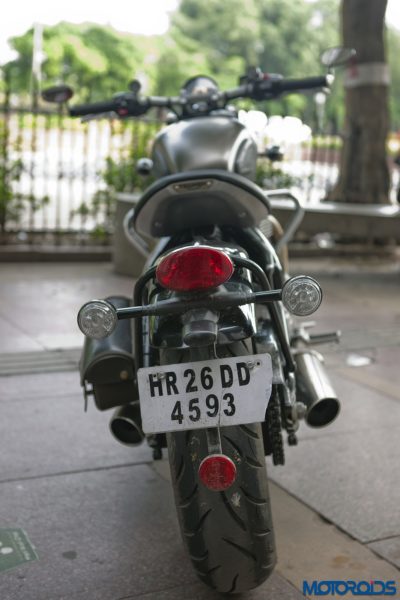 The rear fender is a clean unit with a large U bar holding it. Simple LED brake lights and white turn signals complete the fender look. It also gets a completely new swingarm. The box swingarm is replaced with a heavy V shaped tubular steel swingarm which is longer as well. So the overall wheelbase has increased to 1510 mm.

As we mentioned before, however, the Bobber is about form, and not about what the bobbers of yore were meant to do – shed weight that is. The Bonneville Bobber is 4 kg heavier than the standard Bonneville. 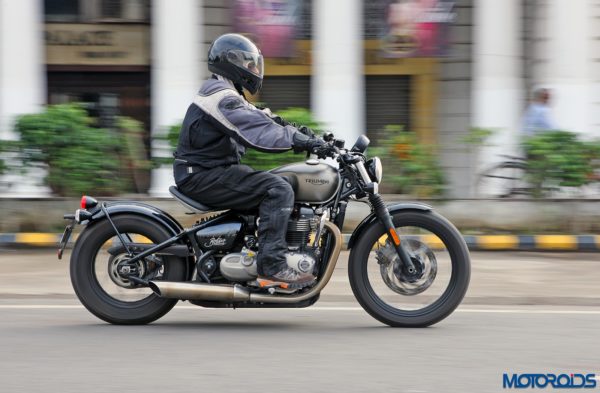 The 1,200 cc Parallel Twin Engine on the Bobber churns out 76 hp @ 6,100 rpm. Though the power is a little down from 79 bhp of the T120, it comes in at a lower RPM. The Bobber gets 106 Nm of torque @4,000 RPM, though, which is 1 Nm more than the standard Bonneville. However, this new tuning setup means the bike is quicker off the line. Vance &Hines exhausts create a beautiful sound track as you speed off into the horizon.

You can turn the traction control off on the Bobber if you so wish. That means, the rear would like to go and do its own thing under hard acceleration as you try to persuade it back in line. It’s scary when you do not expect it. Prepare for it, and it’s bliss! The traction control works though if you are one of those who’d preposterously want to push the limits on a classic machine like this, you can make the rear slide at the extremes. 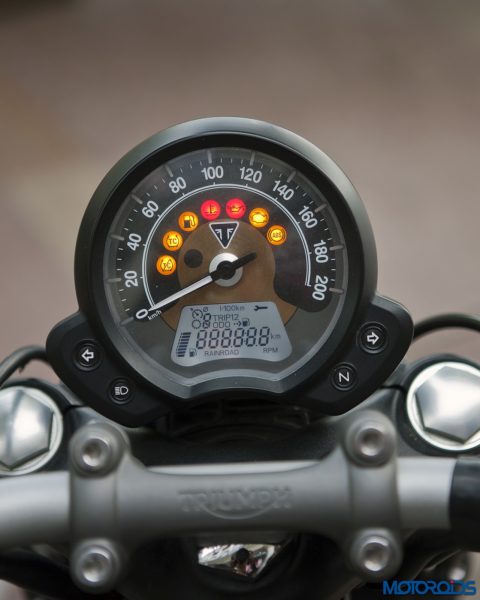 The small LCD screen on the Bobber let’s you choose another setting termed as ‘Rain’. It does not reduce the power but it does change the power delivery. The setting makes the power delivery more linear and throttle response is not as aggressive, making the ride safer under wet conditions. I did end up riding in rain and having that setting available was comforting. All you have to do is stop for a moment, press the selection button and you can choose between the Rain and Road modes.

Gearing is very sorted on this bike and one can putter around town without having to do too much shifting. That makes it a good city cruiser. However, once you hit the highway, just let it rev and it would show you her effervescent, pacy side too. 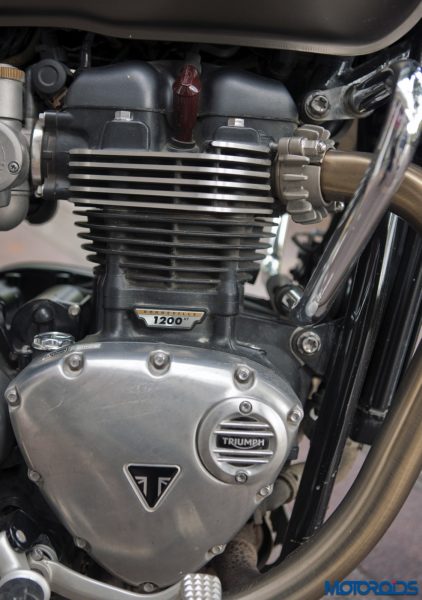 Gear shifts offer good feedback without being clunky. Being low slung, the sensation of speed is pretty phenomenal. I had ridden a very similar bike – the Indian Scout Sixty a few months ago and I must say that I liked the Bonneville Bobber better. The Bobber feels very connected to the road, and very much in control even at the upper extremes of its speed.

Handling wise, the bike will surprise you. You would probably want to think that with its long wheelbase, and a low slung cruiser stance, the Bobber wouldn’t be much of a leaner. Throw it around a corner, however, and any prejudice about its handling prowess would be left in the dust. It leans rather well into the corners and even changes direction wish ease. Needless to say, there is a lot of peg scrapping due to low foot pegs. The bike can definitely handle the curves and be more aggressive but for the low set foot pegs. 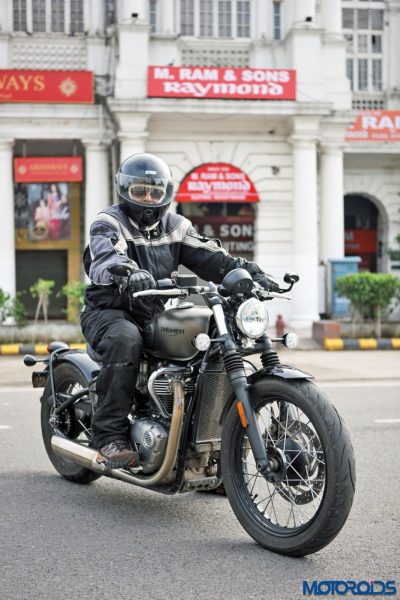 There better be good roads as you go around those corners. Because one place where this bike is really limited is the ride part. Due to much less travel suspension which have been setup stiff, you do get to feel the potholes and rough patches in a more than desired way. The saving grace here is the seat. The single floating seat might look stiff but is very comfortable and will does do its bit in covering up for the suspension. Added grace is the ability to adjust the seat as per rider’s comfort. So overall, you sit comfortably, look good but you’d be wishing that the government put your taxes to good use and give you smooth roads for most part.

The Bobber also rides low, and it does kiss quite a few of those speed breakers. Another issue while riding around town is the large turning radius. This is no traffic cutter but it was never meant to be. Despite its limitations, the bike is a good commuter but only if the roads between your workplace and home do not resemble the surface of the moon. 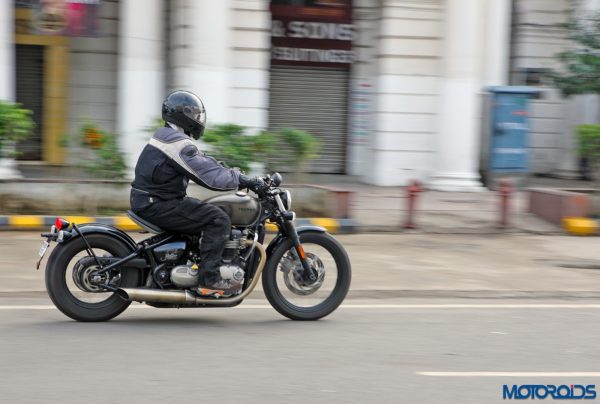 The ride is stable and bike stays put at speed without losing it line. It makes for a great highway cruiser with the rider looking majestic with the arms and legs stretched out riding into the wind.

Triumph Bonneville Bobber is an amazing bike if you want to look good on a Sunday morning ride, stand out and stay ahead of the riding pack but do not want to be bothered about running around your mechanic to get that custom job. Triumph has done a majestic job of creating a looker for those who care. But this should be the second or third bike in your garage and not the only one. It’s a special machine for those special occasions. For everyday practicality, you might want something less exquisite, something that has a pillion seat, higher ground clearance and more suspension travel. 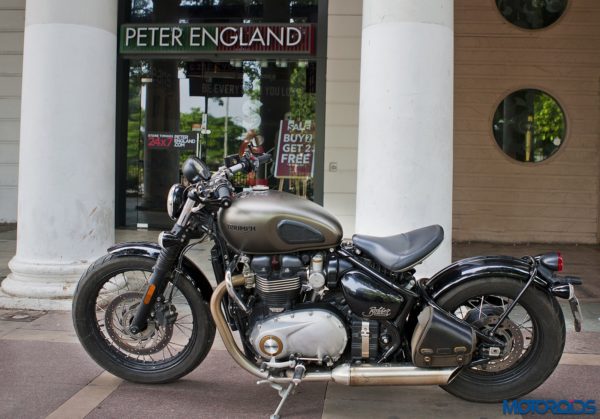 The Bobber is for the connoisseur. It would look pretty and earn you brownie points from everyone for your great taste. You would look smashing as you ride one on an open highway. And you can even choose from custom packages which are offered by Triumph to make your Bobber even more distinct.