Home Features Travelogue: A Drive Through Kerala In The Rains – Day 4

Like all ardent photographers got up before sunrise and packed my cameras, tripod and lenses and went down to the jetty, but unfortunately it started pouring heavily and the sky was dull and overcast and judicious use of umbrella with the camera on the tripod allowed me to get a few shots of the early morning boat traffic. Back to the house for a hot cup of tea followed by a typical Kerala b’fast of appam and kadalai. The rain had stopped by then so walked up the small path in front of the Zacharias’ and  got a few shots of some a very pretty bungalow and other residences and got to see the Onam decorations by wave of buntings and flags. 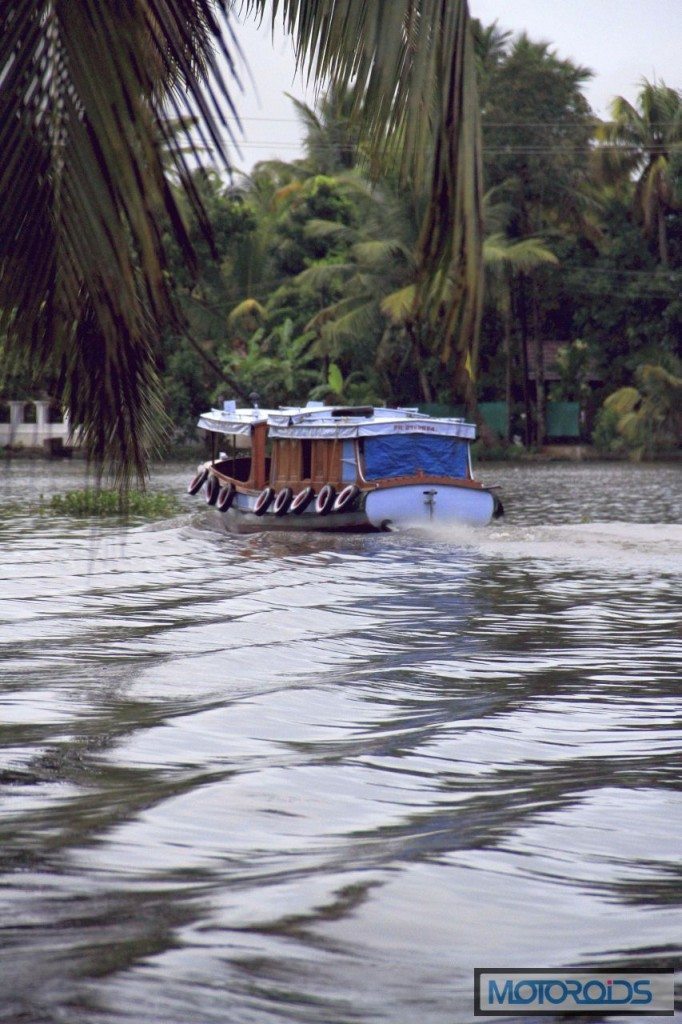 At 8.30 am sharp, the launch “Kuriakose”, captained by James awaited us at the jetty to take us around the backwaters. It was a beautiful, 10 seater, diesel engine launch with well polished teak paneling in the passenger’s seating area and a movable canopy at midsection which gave an excellent all round view if one stood there. By this time the sun had come out in full Kerala glory so it promised to be a great day. And a great day it indeed was – with the lush and verdant greenery of the paddy fields, interspersed with the houses set amidst – what seemed like a burst of greenery ! The backwaters teem with everyday life much like any other village in Kerala, except the centre of life seemed to be the waterways. People washed clothes, dishes and themselves by the canals/waterways. Innumerable pedestrian bridges criss-crossed the waterways, all of them sufficiently arched to allow the boats of all sizes to pass underneath. Some of the newer bridges were broad enough to allow two wheelers to pass over them. Lots of churches and some temples; passed a cemetery too. The equivalent of bus stops were the boat stations where people patiently waited for the route launches to come by. Boats of all sizes and shapes from the luxurious Kettuvellams or rice-boats to 100 seater service boats, 5 man paddle boats, single seaters and door to door fisherman selling his wares. Fisherman casting their nets from boats, to gentlemen at leisure fishing by their doorstep with a rod and line was common site. Crowded and narrow waterways merged into broad canals and rivers which opened out into Kattakayil and Meenachil lakes which stretched into the horizon. Again clear stretches of water interspersed with areas where water hyacinth practically blocked the entire surface of the water. A visual feast for the senses. Got back to the home-stay for a sumptuous lunch followed by a short siesta. 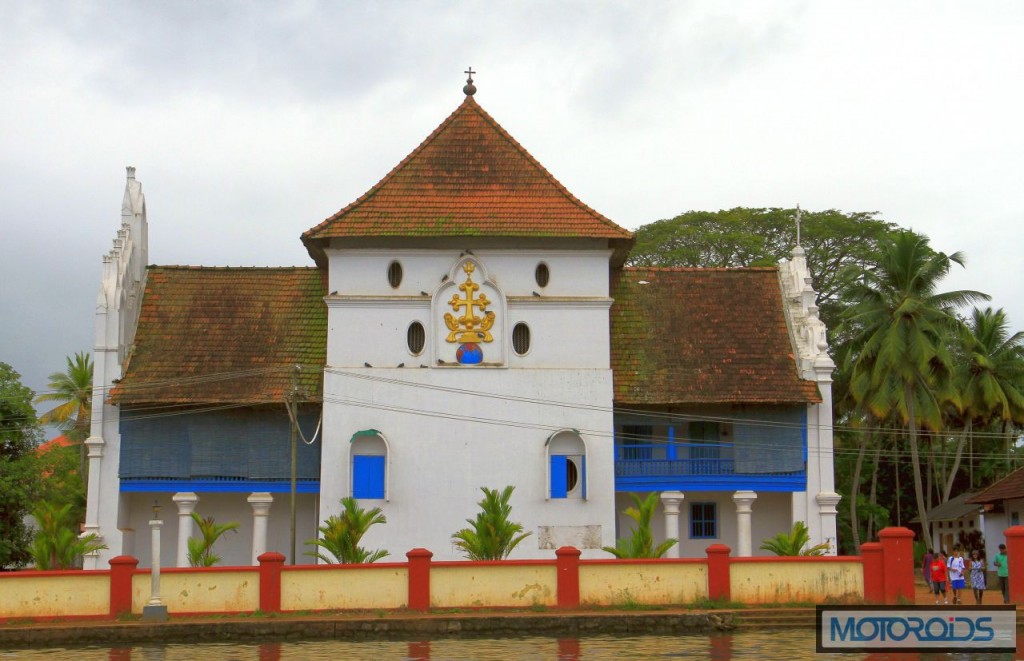 Afternoon saw us travelling 6 km away to Champakulam, another village close by and the ancestral home of Varghese. Took us about 20 mins to get there. Our first stop was at James Mullaserry’s handicraft shop – James being Varghese’s classmate from school. James’s father was the late master sculptor Chacko who was famous for his religious sculptures in wood and the tradition is being maintained to this day by his brother and nephews. Their workshop was behind the handcraft shop where we saw Mr.Chacko’s brother at work on an unusual crucifix which was being sent to a church in Calgary, Canada. Next door was the famous ST.Mary’s Forane Church or the Champakulam Kalloorkadu church. This church is one of the oldest catholic churches in India and is believed to have been established in AD 427 and is considered to be the mother of church of all the Catholic Syrian churches in Alaphuza district. The open air rock cross at this church traces its antiquity upto 1151 AD from etchings on its base. This church was at one time a part of the Niranam church founded by the Apostle St.Thomas.

The current church is probably from the Portugese era and large parts are of wood like the staircases and two large verandahs onto which open windows at the upper level of the church. The pulpit is supported at its base by a trunk like pillar which curves into the mouth of a fish set into the wall. There are no pews and the congregation sat on mats on the floor. The pulpit was very elaborate and in the style of the churches in Goa. The other end from the pulpit opened out into a long and narrow hall with closed sides. This space was used to seat people with communicable diseases in the past. The front of the church was flat sided and faced the river. 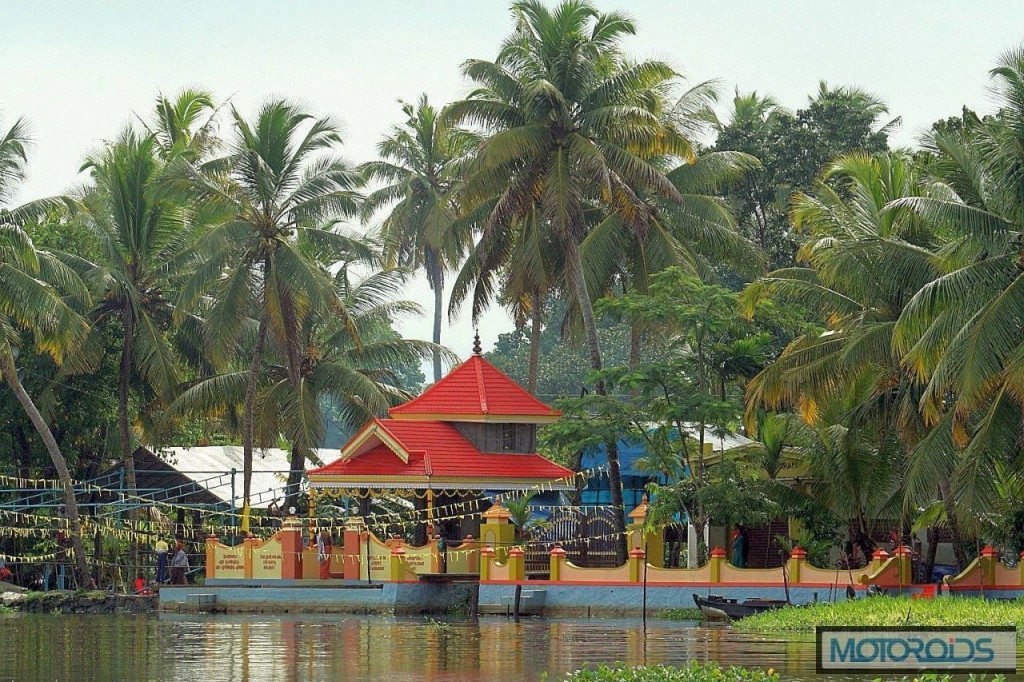 Next to that was a Dwaja Sthambha like a Hindu temple, except that the top had a cross, but for that it was like any other Dwaja Sthamba, complete with the brass/copper sheathing covering the pole to the little yard arm at the top. The other side housed the open stone cross. Towards the rear was the parish hall and had photographs of past bishops and one was a Porukara – Varghese’s family name! Another interesting object is a life sized concrete house boat lined on the inside with stainless steel. During the St.Mary’s feast in Feb. donors fill this hollow portion of the boat with sambar, to be eaten with the mass distributed appams. Next to this was a small cemetery. A brief visit to Varghese’s brother’s home across the river rounded off our visit to Champakulam.