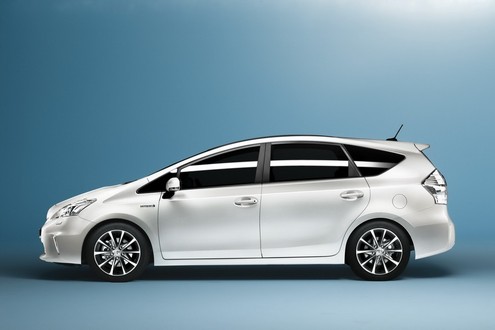 Finally we have a 7 seater hybrid. The Japanese have cracked the code giving birth to the Toyota Prius Plus which is a 7 seater MPV. Yes it’s the rarely seen Toyota Prius with an extended wheelbase to accommodate that extra row of seat.  Toyota was working hard to make the Prius Plus happen and they have managed get the job done by using  lithium-ion batteries  instead of the traditional nickel metal hydride pack which was used in the Prius.

Toyota has not released any specifications that has left us at Motoroids thinking.  On the exterior we have a Prius similar body with sharpened headlights, flat vertical aero corners that reduce air turbulence, enlarged lower grille for better aerodynamics. The Prius Plus will run on the latest generation Hybrid Synergy Drive.

All in all it’s a car which was needed in the segment, considered to be the most efficient in terms of fuel consumption this one will set a new standard.  Toyota Prius Plus will be available in the European markets in the first half of 2012 in three variants EV, Eco & Power.