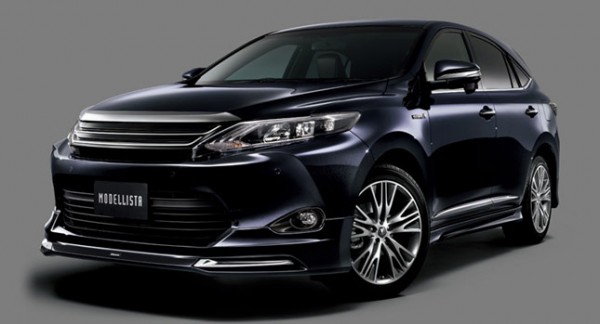 Showcased at the upcoming 2014 Tokyo Auto Salon is the new Toyota Harrier, which is one of the newest models in Japanese auto major’s model line up, The new Harrier SUV went on sale in Japan earlier this month and will most probably get a hybrid variant next year.The new Toyota Harrier SUV will be among the manufacturer’s chief models that will be showcased at the 2014 Tokyo Auto Salon.

However, the Harrier SUV that will be showcased at the performance and styling show won’t be your regular models. Instead, the manufacturer plans to come up with two tuned editions.

The first of these two models is the Harrier Sportivo Concept that comes straight from Toyota Racing Development (TRD team. This model will be based on the 2WD variant and will come kitted out with a lowered sports suspension, a ground effects kit, revised front grille, 18 inch mag wheels and a sports end-can.

The second model will be a blue colored Harrier Modellista, which is based on the petrol variant. This variant is powered by a 149hp (151PS) 2.0-liter petrol engine that comes mated to CVT. This model too will be a two wheel drive.

Visual enhancement on this model will include a protruding front apron, side skirts, rear apron, 19 inch mag wheels, a tail-gate mounted spoiler and some chrome. This model also gets LED lamps inside the lowered suspension.

Both the tuned models of the Harrier SUV will most likely soon make it to the showrooms as standalone trim models in Japanese Domestic Market.

Stay tuned to Motoroids for more updates on the upcoming 2014 Tokyo Auto Salon and other cars to be featured at the show.