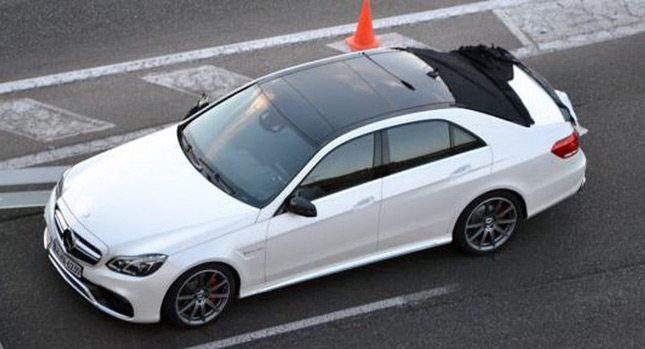 We have been regularly posting about the developments related to the upcoming 2014 Mercedes Benz E Class facelift. The 2014 Mercedes-Benz E-Class sedan, which will be the facelifted version of the current E Class, has been seen undisguised on a couple of occasions. The car was seen near hotel Chamartín in Madrid, Spain.

The revamped E-Class seen here might very well be the AMG version as bigger wheels, red brake calipers and enlarged air vents on the front bumper can be clearly made out from the pic. The photographer also says that he saw the “V8 biturbo” logo on the front fenders.

The 2014 Mercedes Benz E Class facelift will come with a single headlamp units on each side (replacing the current two units on each side) and the car will no longer sport the pontoon-style rear side panels (which we think were a neat retro touch).

The car, as expected, also gets a new front grille, new bonnet and revised bumpers, doors & fenders. On the inside, the car gets a new three spoke steering wheel and a revised instrument binnacle.