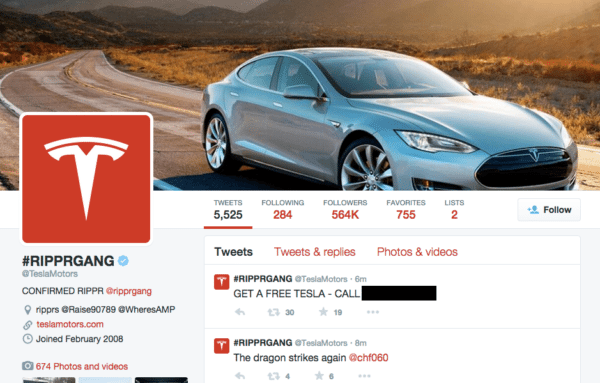 The website and Twitter account of electric car manufacturer Tesla Motors, along with the Twitter account of it’s CEO, Elon Musk, were simultaneously hijacked briefly on Saturday (25 April). It all started with a tweet from @TeslaMotors at 1:52 P.M. pacific, which declared that the account was now under the control of its attackers – a hacker group called Lizard Squad, who claim to be behind a series hacks of Microsoft and Sony gaming networks last year. Tesla’s account’s name was also changed to “#RIPPRGANG”. 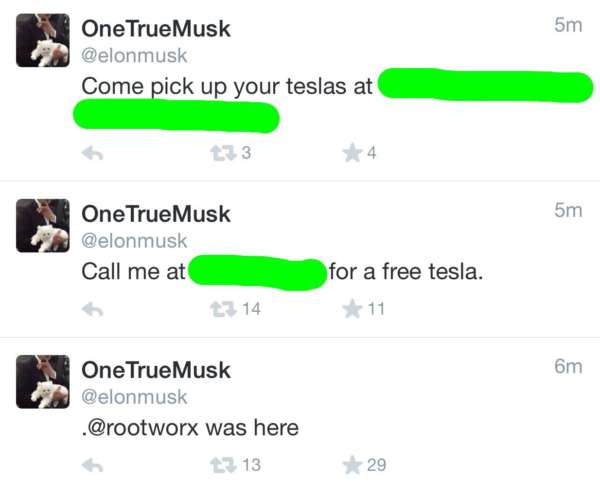 Minutes later, the hackers tweeted about offering free Teslas to those who followed certain accounts or to those who called a certain phone number, which, apparently belongs to a computer repair shop in Illinois. Following that, Tesla’s official website was also compromised, and was edited (below) to declare that it’d been hijacked by the same hackers. The attackers also hacked Musk’s Twitter account (OneTrueMusk/@elonmusk) and abused it in a similar fashion. At around 2:45 P.M pacific, Tesla’s Twitter account was restored. Things have now been sorted with Tesla’s site as well.

Off late, Twitter accounts of prominent celebrities or big brands have been under attack. Singer Taylor Swift’s account, for instance, was hacked weeks ago. Though for the most part, these kinds of acts are more about defacing property and gaining publicity, rather than pilfering important information. Purportedly, the hackers also redirected traffic from the Tesla website to a defaced website using DNS redirect hack.

via TechCrunch and autoevolution