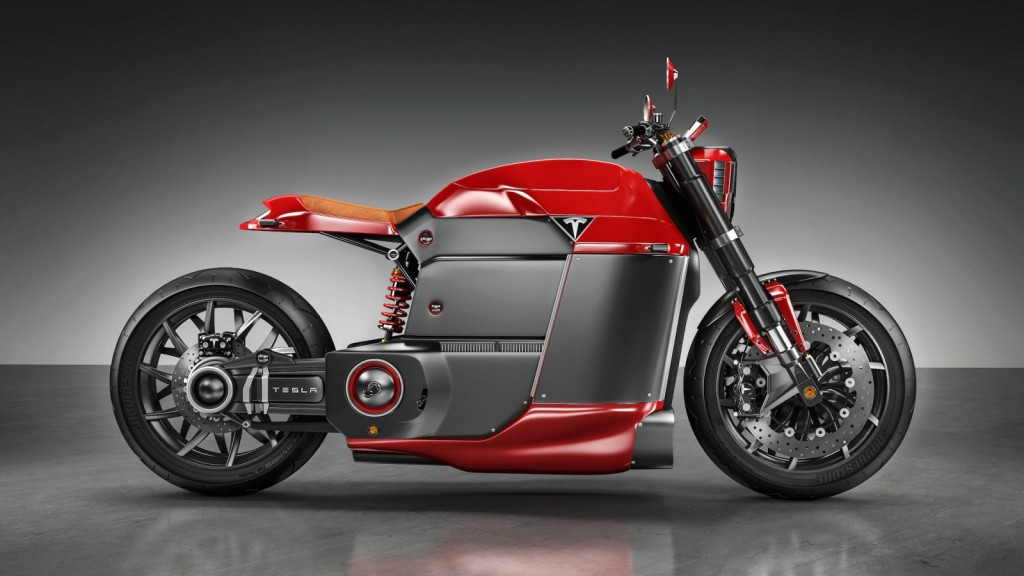 Now Tesla Motors isn’t into motorcycles yet. But that didn’t stop ace designer Jans Slapins from imagining what a electrically propelled motorcycle wearing the acclaimed Tesla badge could out like. The Model M only exists in the realm of the digital space, but the design exercise accurately conjures up the Elon Musk led brand’s two-wheeled ambitions.

It’s futuristic power-plant, with its orgasmic flurry of electrons, can’t hide its mildly retro styling cues. The shape sums up to a heavyweight cafe racer, with the single seat, handle bars, instruments and rear view mirrors given the period treatment. Most of the visual girth comes from the massive battery pack nestled in the midst.

This Model M concept is powered by a 150kW electric motor, fed by a stack of lithium-ion batteries mounted as low as possible within the aluminium frame to keep centre of gravity as close to the ground as possible. The Model M can be ridden in four computer controlled modes: Race, Cruise, Standard, and Eco.

The Model M doesn’t need gasoline, so the space left over by a conventional fuel tank’s riddance has been intelligently used as a water-tight storage compartment. It is cavernous enough to engulf a backpack, along with a laptop and a full face helmet.

The wheels are crafted out of carbon fibre to reduce unsprung weight, while suspension duties are taken care of by a mono shock at the rear and upside down forks up front. Like all electric vehicles, the Model M is devoid of any transmission, as electric motors produce 100% of their torque from 0 rpm itself.