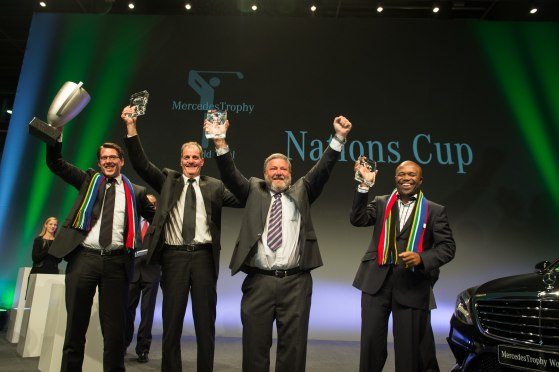 The MercedesTrophy is a series of premium tournaments for amateurs, in which over 60,000 players from more than 60 countries took part this year. Teams from all over the world, each made up of three players, contested the 24th MercedesTrophy World Final.

The highest individual points scores in the MercedesTrophy World Final were achieved by the following players: Jonas Madsen from Denmark was the overall winner with 72 points who won also Class A with 75 points. Class B was won by Nkosinathi Ngcobofrom South Africa with 73 points and Eamonn McCann from the United Kingdom won Class C with 75 points.

“The tournament is an excellent opportunity for us to welcome our customers from all over the world to Stuttgart, our brand’s home,” explains Lueder Fromm, Director of Global Marketing Communication Mercedes-Benz Cars.

“The 24th MercedesTrophy World Final served up outstanding performances on the course, memorable experiences off the course, lots of enjoyment and a worthy winner in the team from South Africa. Many congratulations!“

In addition to the sporting activities, the MercedesTrophy finalists had an opportunity to visit the Mercedes-Benz Museum. The finalists also visited Mercedes-AMG in Affalterbach, a tour of the Mercedes-Benz plant in Sindelfingen, and test drove the current Mercedes-AMG models. Furthermore, the guests were treated to an exclusive presentation of the new S-Class S 63 AMG, which celebrated its world premiere two weeks ago at the Frankfurt International Motor Show.

Those participating in the MercedesTrophy World Final were battling for the final place in this year’s special competition Drive to the Major, with Fred Walters from Canada coming out on top. Everyone taking part in the MercedesTrophy worldwide has the chance of participating in another unique golfing event. Contestants can win a place in the qualification tournament for the “Monday After Event” in the “Straightest Drive” competition.

The special competition “Nearest to the Pin” was sponsored by Laureus Academy members and Brand Ambassadors Franz Beckenbauer and Boris Becker. In addition to receiving the amounts donated during the MercedesTrophy World Final, the Laureus Sport for Good Foundation also benefited from all the donations at the MercedesTrophy qualification tournaments played around the world. Mercedes-Benz is a founder member of the foundation, which tackles social challenges world-wide using funds raised through sport. It currently sponsors over 140 social projects worldwide, primarily aimed at helping children and young people affected by poverty, homelessness, war, violence, drug misuse, discrimination and AIDS.