Home News Tata to launch Aria in the near future! 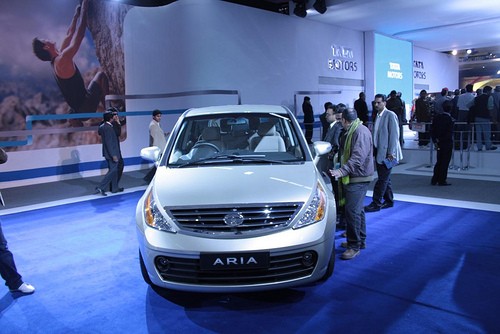 The Aria from the Tata stable which is a seven seater crossover will supposedly be launched in the near future. According to various sources, it will be just few more months until the car hits the streets. The car was spied a month ago during which it was revealed to be a cross between a MPV and a SUV.

The car will sport a 2.2L direct injection common rail diesel engine. This engine is the same one which powers the Safari and Sumo Grande. The Aria is reported to be one of Tata’s most sophisticated vehicles.

“The Aria should be launched most likely in May or June. We are going according to our plans. As for exporting it, we will make all our cars available outside the country depending on their need or relevance,” said a Tata Official.

In India, the car will come with a price tag between Rs. 12 lakh to Rs. 14.5 lakh. According to various sources, the car will make its way to the US, UK and European markets within the next decade.

The Aria will sport various features similar to those of the Toyota Fortuner, Chevrolet Captiva and Ford Endeavour. It is believed that the car will provide all luxuries available in the mentioned cars at a much lower cost. The car will also feature a 4WD and 2WD option as a variant.