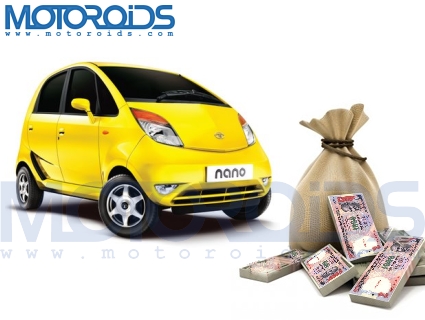 We told you earlier that the Tata Nano was about to increase the sticker price across all its variants due to the rising inputs costs (refer to the text below). Well, the imminent has happened. Yesterday, the Pune-based carmaker has confirmed the increment in the Nano’s ex-showroom price, which has now gone up by Rs. 6,000. We feel that the hike in the price tag is not unjustified nor is it too high for the current crop of customers to bear. Tata has further clarified that initial 1-lakh pre-bookings for the Nano are protected from the price hike, which means those customers will get their Nanos at the same price they booked it at. For the rest of the customers who have booked the Nano, Tata has started intimating them about the price hike. “Despite a steep increase in input prices, their Tata Nanos are being priced only 3-4 % higher, depending on the model, than the price announced at launch,” the carmaker said in a statement issued to the press.

Furthermore, Tata  Motor also announced that they would reward customers for bearing with the company through a delay in delivery time due to capacity constraints. The statement added, “As a gesture of goodwill, the company has announced a choice of one-year free annual maintenance contract, or free accessories worth Rs 4,000, or an extended warranty.”

We told you a few days back that the Nano is going to be available directly off the shelf without the need for a prior booking. However, the car may not cost the same anymore. This is because Tata Motors seems to be contemplating a price hike for the Nano. If incorporated, the hike will range between Rs. 5000 to Rs. 15,000 depending on the variant. This comes in as no surprise, since Tata, during the launch of the Nano, had hinted towards a probable price hike once they deliver the initial one lakh orders. With the deliveries of these bookings likely to be completed by July end, the Nano may boast of a higher sticker price in order to increase the earnings for the component manufacturers. The Nano was undoubtedly a challenge for the OE industry which the succeeded in achieving but it barely gives them any margins. As Tata puts it, ‘though the vehicle manufacturer manages its cash flow well, its the supply chain that takes a big hit’.  Also add to this the fact that the raw material prices have gone up yet again, forcing most carmakers to hike their pricetags for the fourth time this year! In fact, Maruti Suzuki, Ford Motor India, Toyota Kirloskar and Mahindra & Mahindra are all set to announce a price hike for their vehicles in the coming week. So you see, the common man’s vegetables like onions and potatoes are not the only ones going through a price hike, its the common man’s car that will face the brunt too. Probably Tata should indeed chop off the Nano’s roof to save metal costs and launch a cheap convertible version of the Nano that we showed you a few days back. Let us know what your thoughts are by posting in the comments box below or starting a new thread on the Motoroids Forums.