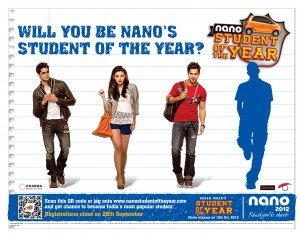 Tata Motors has launched the ‘Nano Student of the Year’ contest for all college students in India. This event is in association with one of Bollywood’s biggest releases this year, ‘Student of the Year’, a romantic comedy, directed by Karan Johar. Tata Nano is the on-ground promotion partner for the movie.

The Nano Student of the Year will be awarded with a Rs. 3-lakh scholarship, the first runner-up will get a Tata Nano and the second runner-up will receive a Macbook Pro.

In the first round, students will be judged on 4 parameters – Academics, Culture, Sports, Social life. The top 8 finalists will be declared on the website on October 2, 2012. The top 8 finalists will compete for the ‘Nano Student of the Year’ title and will perform 6 tasks. Viewers & Tata Nano fans can vote for their favourite student on the website.

A star-studded finale will be held with the young and vigorous movie star cast, Varun Dhawan, Siddharth Malhotra and Alia Bhatt, who will be judging all the 8 participants. Points given by them will be added to the viewer’s votes. The student with the highest number of votes will be bestowed with the title.