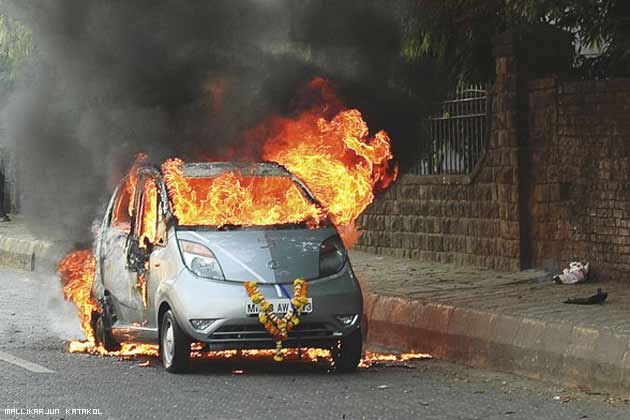 India’s cheapest car to own is in news yet again and for reasons which Tata Motors absolutely detest. Yes, another Nano caught fire recently. This time the incident took place at Vadodara’s Subanpura locality.  The car belonged to Mr Mayank Doshi and according to the Fire Officials the engine of the Nano caught fire near the Samta police outpost in Subnapura locality gutting down the front seat.

We have reported to you in the past such incidents where the Nano was engulfed in fire. Till date there are 7 such cases and it is surely not a small number. Tata should look forward and work towards what really goes wrong as these cases are increasingly becoming common with the Nano. What’s more, even Motoroids have been exclusively reported about a car catching fire by its owner. We will bring you more news on this, once we have some concrete evidence.

We’re still not able to figure whether the car that caught fire was ‘mended’ by Tata Motors for additional safety. It would be prudent to recall that Tata Motors had asked all its customers to bring the Nano back to the service stations so that the company could make some changes to the vehicle for additional safety against fire. If the car that caught fire rolled out after the recall exercise, or if it was already treated for better safety, then it should be a serious concern among current and prospective Nano buyers.

We’ll try to get in touch with the owner, and bring you more information. Stay tuned.