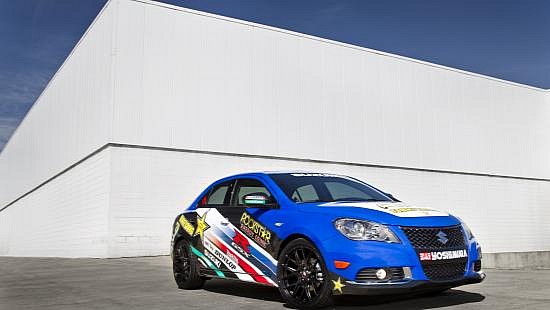 A few weeks back we told you that Suzuki is planning to take the Kizashi to ‘a new level’ at the New York Auto Show. Now the company has revealed two new versions of the sedan at the ongoing NYAS.

The First of the two versions is the Kizashi Apex concept. A performance oriented concept, the Apex is  “the link between Suzuki’s automotive division and its championship-winning motorcycles” according the blokes at Suzuki. The Kizashi Apex Concept is to be powered by a 2.4-liter DOHC engine capable of producing upto 300bhp of power. The turbocharged engine will be mates to a six-speed manual transmission.

The design and livery of the Apex concept is inspired by the Suzuki GSX-R Superbike. The company wants to introduce the performance sedan first in the US market for the performance crazy enthusiasts.

Another Concept unveiled by Suzuki at the show was the EcoCharge, which unlike its performance based sibling, focuses on the green and clean theme. The EcoCharge is propelled by a 2.0-liter gasoline engine with 16 horses mated with a liquid-cooled 15-kW electric motor/generator unit.  A 115-volt air-cooled lithium-ion battery also forms a part of the system.

Apart from the hybrid trick, Suzuki have also incorporated regenerative braking, a stop-start system, fuel cut off during deceleration and low resistance tyres. All this, Suzuki claims has helped increase the efficiency by 25 percent.

The Ecocharge will only remain a concept for now as there has been no official announcement about the production version.