It has always been a pleasure bringing superbike ownership experiences of riders in India to our readers. From a humble Harley Iron 883 to the Devil from Deutschland- the BMW S1000RR, we’ve not only tried to bring across notions of riders but also an informal set of data that revolves around the ownership.

Today we speak to Jeet Oswal- a superbiker from Pune and one of the prominent members from A.C.E.S. (A Club of Elite Superbikers). Like many, Jeet started his motorcycling journey on a modest Yamaha RX100 before jumping to a Royal Enfield. His superbike dreams hit reality when he took custody of a 2006 Honda CBR1000RR Fireblade.

Since then he has hopped from the Blade to an Intruder to a Gixxer and again to a Fireblade which still remains. But the litre class Honda isn’t the only toy under Jeet’s ownership- there’s a big daddy encroaching upon major of the Blade’s parking space. Something which one our team-mate Yatharth refers to as “A truck, and not a motorcycle”. A legendary machine, which by its sheer colossal persona makes the best of superbikes parked next look like- well, mopeds! A proverbial “Living Room” on two wheels and probably one of the best, if not the best long distance touring machines on this planet. So here’s Jeet Oswal sharing all he could about his ownership with the mighty and glorious Honda Goldwing. 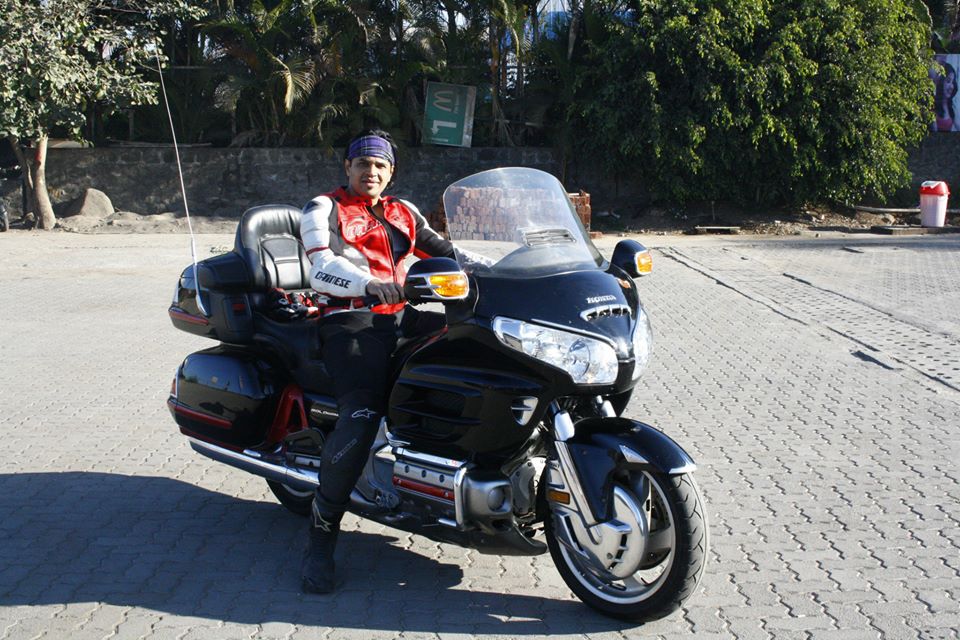 1) When did you buy your Goldwing?
The fascination started a decade back but the opportunity of actually owning one came on September 21, 2012

2) Which bikes did you own prior to the Goldwing?
Pune is a city of two wheelers and I started my biking career with a Yamaha RX 100 followed with a Royal Enfield upgrading to a 2006 Honda Fireblade undertail moving to a cruiser, the Suzuki Intruder along with a track bike, the Suzuki GSXR 600 and finally settled for the Honda CBR1000 RR (Fireblade) along with the Honda Goldwing Interstate! 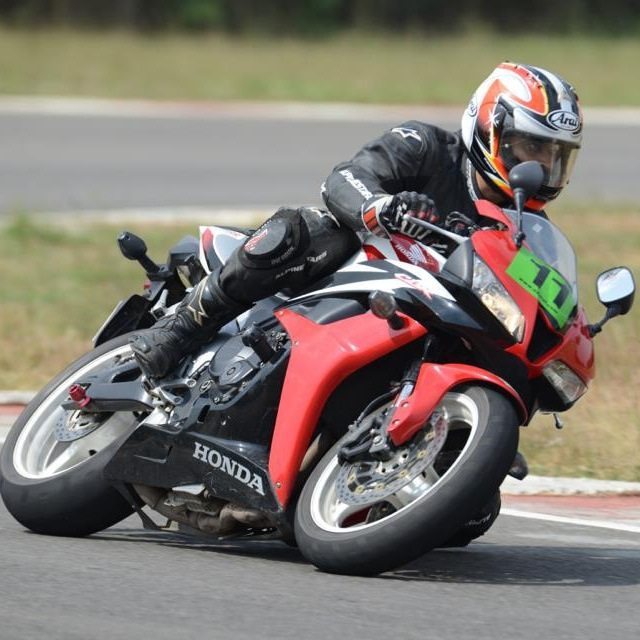 3) Which other bikes do you own apart from the Goldwing?
Currently I have a super-sport which is the Honda CBR1000 RR alongside the Honda Goldwing 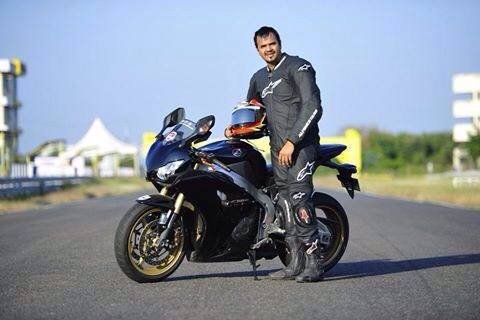 4) Why only the Goldwing? Did you consider some other bike while making a purchase decision?
I have always been a fan of cruisers and my first real cruiser was the Suzuki Intruder 1800. The bike did have presence but it lacked the riding pleasure on ghats and steep corners. With the low ground clearance, broader wheel base and wider rear tyre cruising on straight patches and city was fun but the riding in the ghats was a pain.

I was looking for a change when a very close friend Prakkash Pawar introduced me to the Goldwing. He always said the Goldwing was designed by aeronautical engineers, I do not know how far that is true but I believe it when I ride the Goldwing. It is an engineering wonder. The sheer presence of the bike is show stopping. But the public attention is not the only appeal, it is the riding pleasure too. In the US it is called the Honda Goldwing Interstate and I can tell you why? The bike is designed for superior cruising. The ground clearance and suspension is just perfect even for Indian conditions. For its weight, the bike seems like a toy to ride. Enough storage, a music system with radio and 4 speakers, a motor driven reverse gear to make parking easy, Cruise Control, Anti Lock braking, ABS and perfect weight distribution make the ride comfortable and easy. People who have cruised with me as a pillion rider have always felt the Goldwing to be more comfortable than a luxury sedan. I rest my case with saying the Honda Goldwing is the S Class of cruisers in the world. 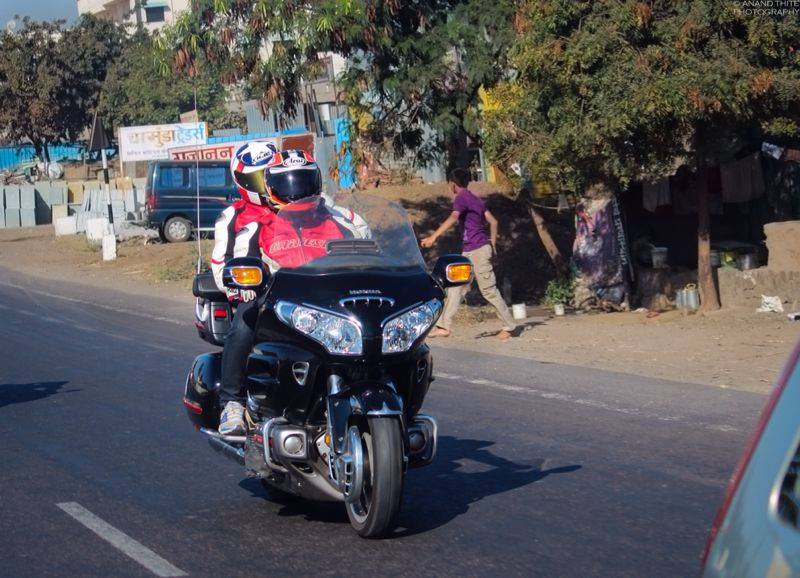 5) What is the best part you like about your bike?
The list is never ending so let me explain with an example. I am part of a group of superbike riders called ACES (short for A Club of Elite Superbikers). We do Sunday rides to various destinations in and around Pune. Most of the bikes are super-sports starting from 600 cc to a liter class and more. These superbikes have tremendous torque and are designed for high speeds. The riders we have are seasoned with most of them having track experience also. It is not easy for cruisers to keep up with these superbikes who average a speed of 170 to 240 Km/hr on a regular Sunday ride to Mahableshwar or Aamby Valley. With the Honda Goldwing, I have never felt outside the family. The bike is engineered to perfection. Let it be the initial surge of speed or the maneuvering at corners, the Goldwing fits in like a glove in hand for an able rider and finally, wherever we park, the bike shows an attitude towards the crowd. The Honda Goldwing is the BIG DADDY of all superbikes  🙂 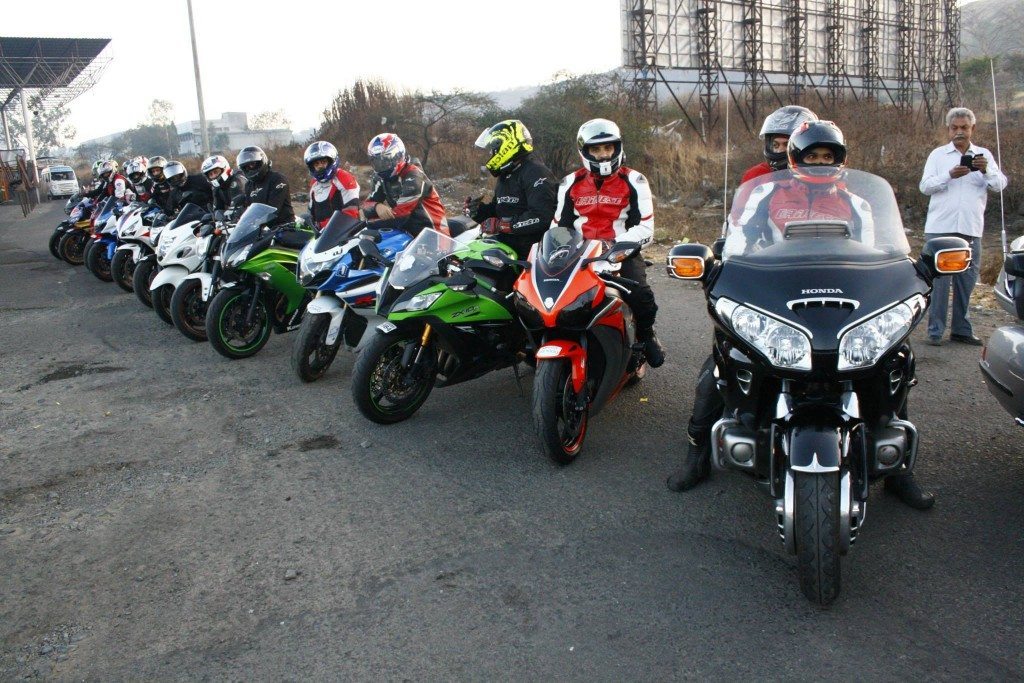 6) And the worse part?
The worst part of owning a Honda Goldwing is the wait for riding again 🙂

7) What has been your longest ride?
My longest ride has been to Goa for two consecutive years, once with a pillion.

8) How has been the after sales experience?
Since the bike is an import there is no expectation of service from the company. But we have some very good mechanics in Pune and till date I have not experienced any problems.

9) How much on average do you spend on service including consumables?
The bike needs a change of Oil, Coolant and Brake pads at regular intervals. An average service costs me around 6000 to 10000 rupees max at an interval of 3 months (though that depends on the kms a rider clocks) I would classify it as a low maintenance bike

10) Any independent service centre/ mechanic you would recommend?
For Pune, one should try Yogesh Mishra. He is a qualified mechanic with all the tools and experience for servicing a Honda Goldwing. Moreover, he speaks with the Honda Service team in US in case of exceptional problems and I would rate him among the best individual mechanics in Pune. He has been servicing my bike since I bought it to my complete satisfaction. 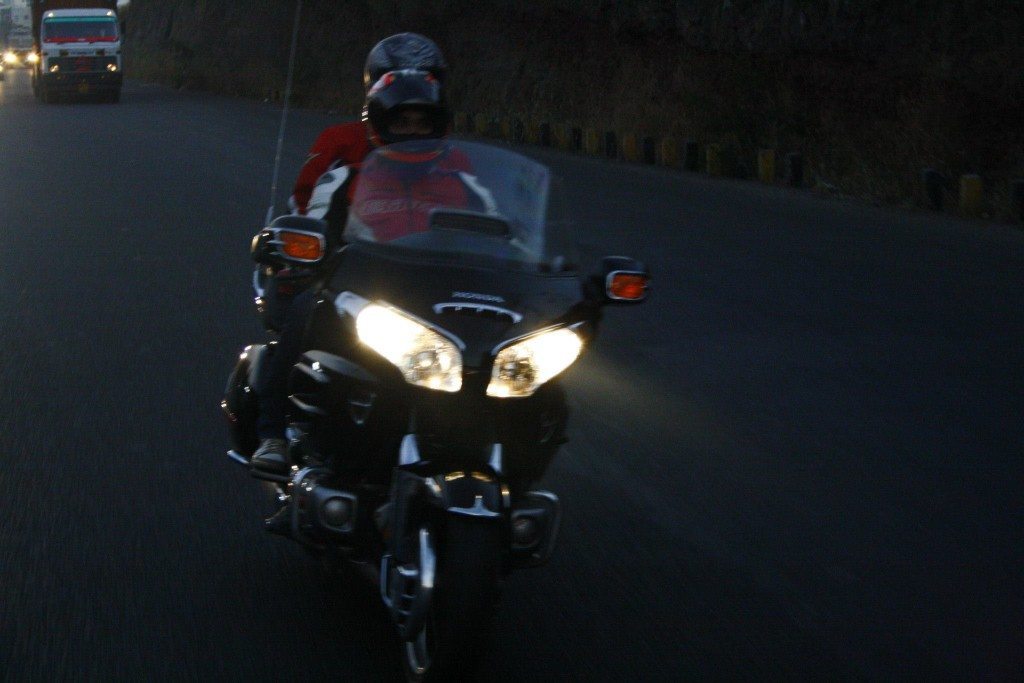 12) What modifications have you done to the bike? What difference has it made?
I have some fitted in some aftermarket LED lights just to add to the look of the bike. Personally, I do not feel the bike needs any modifications at all

13) What makes up your riding gear?
Riding is a dangerous sport especially in India where we lack the basic knowledge on rules of the road. At A.C.E.S safety is not an option- IT IS A COMPULSION! When on the Goldwing, my riding attire is:
– Arai helmet
– A Dainese leather riding jacket
– Alpinestars riding pants (with proper knee protection)
– Alpinestars riding shoes (Full length)

Without riding leathers, shoes and certified helmet being a part of our riding group is not possible

14) Have you ever faced issues from cops since lot of bikes out there are grey imports and inappropriately documented?
There were some issues on grey imports a couple of years back but personally I have not faced any problem

15) What would be your next bike?
I am eagerly waiting for HONDA to officially launch the next genre Goldwing in India 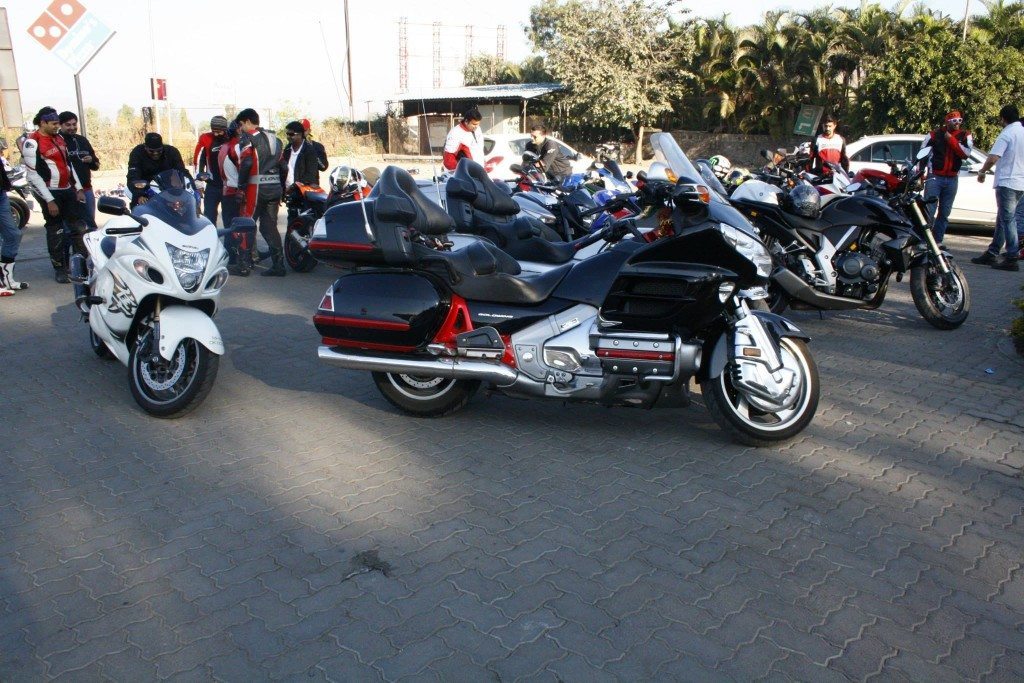 16) Any pointers on parking in public places?
Superbikes catch a lot of attention and so one has to be very careful with parking the bike. We usually do not leave our bikes out of our sight and usually ride to places which provide secure parking. The bikes are heavy and if fallen can cause severe injury to a curious person and to the owners pockets.

17) What tips would you give to prospective superbike owners?
Owning a superbike is easy but we should not take it for granted. Understand the power of the machine and your capability of handling the power. I always say, it is easy to open the throttle and let the RPM blow out, but the challenge is to control the stop the bike when situation goes out of hand. Always remember, while riding there are a lot of things which are out of our control so always be protected in riding gear along with a helmet and take it easy for at least 10 rides to understand the dynamics of a superbike. I would also recommend superbikers to do a California Superbiking School basic course if and when the opportunity arises.

18) And finally the question that we Indians love so much.. ‘kitna deti hai’? 😉
I am smiling while I say “Mind blowing satisfaction 10 km per liter deti hain” 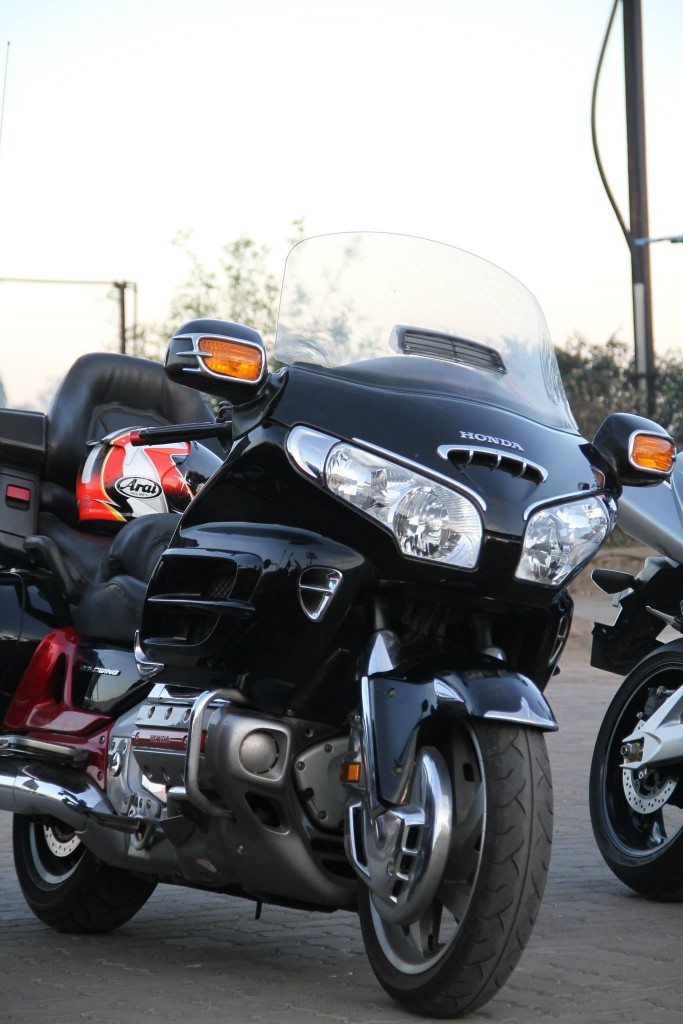 So that was it! Jeet’s ownership experience of the gigantic Goldwing does speak a lot about the bike which is generally referred to as a bulky set of wheels restricted to long hauling blacktops. The numbers revealed are no less than mindboggling (4,80,000 kms…..gosh!) and the mileage figures were indeed on the higher side than what we had expected from the six cylinder 1832cc motor that lugs around nearly half a ton!

We at Motoroids wish Jeet the best of times with his Honda Goldwing Interstate and hope his riding stint surpasses that magical mark of 4,80,000 kms!