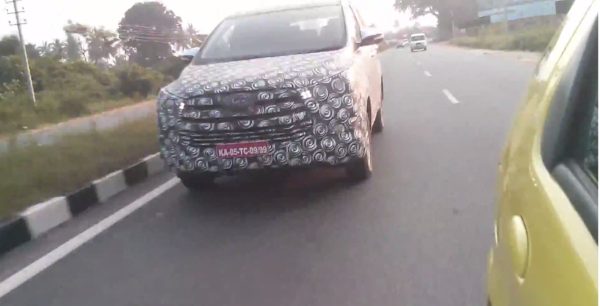 Japanese car major Toyota will upgrade its class leading MUV, the Innova very soon. Many test mules of the upcoming 2016 Toyota Innova have been spotted several times. The latest details come from Sanjay Rao who posted a spy video of the test mule of the 2016 Toyota Innova on his YouTube channel. This time, the test mule was spotted with LED daytime running lights that were placed vertically between the headlight and the front grille.

The 2016 variant will be based on the Innovative International Multi-purpose Vehicle (IMV) platform. So, the 2016 Innova will continue to come with the ladder-frame chassis. The front gets newly designed headlights that are likely to be loaded with projector setup. The front bumper also seems to be slightly bulkier than the current generation Innova. From rear, the upcoming variant will receive a reworked tail light and a redesigned bumper. Mechanically, we expect the 2016 Toyota Innova to come with a more powerful engine along with an automatic gearbox. The current generation Innova comes with two engines, a 2.0-litre petrol unit and a 2.5-litre turbocharged intercooled diesel. The petrol engine laden Innova makes 130 bhp of power and 181 Nm of torque. The diesel motor makes 100 bhp of power and 200 Nm of torque.

With the rising competition in the MPV segment, and moreover from the compact SUV space, this upgrade will be crucial for Toyota Innova. Do you agree with us? Share your thoughts and opinions with us through comments below.