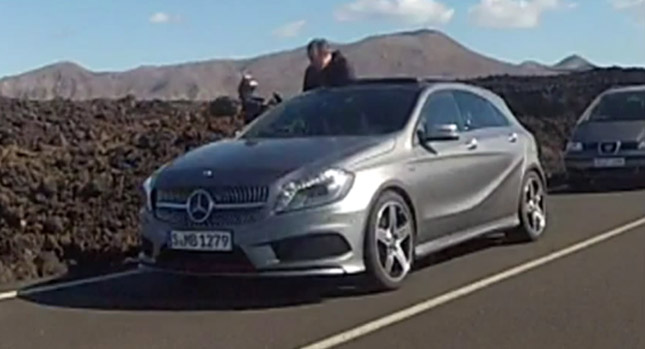 Recently, a bicyclist (!!) managed to capture on video tape the all-new 2012 Mercedes Benz A Class hatchback. The cyclist was riding from El Golfo to Playa Blanca on the Spanish island of Lanzarote in the Canary Islands.It is very likely that the German biggie was at that location to film the new model of the car.

The five door hatchback should be the first variant of the new A-Class to be introduced to the world.  Mercedes had earlier confirmed that this 5-door hatchback will make its debut at the fast approaching Geneva motor show. Our sources say that a sporty 3 door version of this car should hit the market next year. The same sources also claim that the AMG version of the A-Class will feature all-wheel drive with power coming from a high-performance four-cylinder turbocharged petrol motor producing as much as 300HP.

From what can be seen in the video, A-Class seen here is either the much talked about upcoming A25 AMG or the regular model fitted with an AMG sports package. What with the front bumper with the stretched out side pockets, the large alloy wheels and the side skirts? The BMW 1 series has suddenly started looking pretty ordinary. Thanks to the newbie here.

If not the S class Pullman, the good Lord should at least buy me this Merc Hatchback here.
https://www.youtube.com/watch?v=lTYewqhf6i8&feature=player_embedded
Story References: Youtube/Ogottnl via Autoblog.nl