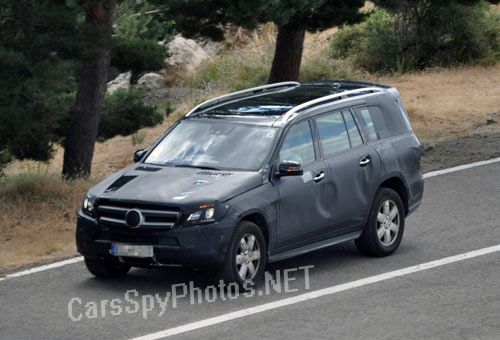 After launching the 2012 M-Class Mercedes had to look after its sibling which also was due for makeover, the larger GL-Class crossover. The 2012 GL-Class, which we can be seen in the spy shots appears longer and slightly narrower than its previous model.

We do not expect Mercedes to overhaul the model entirely, and so do these spy pictures reflect. The changes seen will be meager with new set of headlamps and LED taillights along with the day time running LED lights. Insides will be made more plush with better and comfortable seats wrapped in high class leather. There might be an additional bonus of a better music system and with the longer looks we can expect slight increase in the leg room.

Under the hood, the new GL may showcase the same old engines, namely the GL350 turbo diesel V8 and GL550 V8. For the V8 model the 5.5 lit petrol engine is likely to be replaced by the 4.6 lit new twin turbo powerplant found in the other 550 Mercedes Benz models.

The GL-Class is expected to make its debut later this year. Stay tuned for more updates