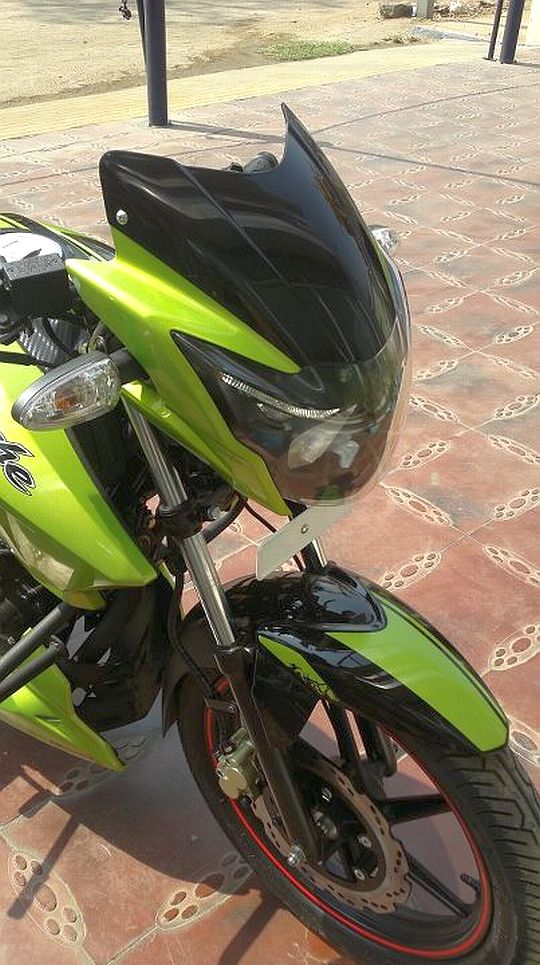 Only a couple of days ago, we became one of the first few to come up with images of TVS RTR refresh. Billed by some as the new 2012 model, this upgrade was being said to be developed only for the 180cc version. However, latest images at TVS facebook page reveal that the facelift is applicable for 160 as well and the images clearly show that TVS seems to have got a tad too inspired by the modus operandi at our Hero Motorcorp and has decided to play a fair bit with cosmetics to come up with a bike that looks a fair bit like the Bajaj Pulsar! The good thing is that the guys from down South have not gone overboard with the graphics. The bad thing is. . .well. . we are just getting started.

The teaser that TVS had released on RTR 180’s website made us feel that TVS is almost ready with an answer to the upcoming Bajaj Pulsar 200NS. While many got a bit misled due to the twin lights seen in the teaser, we were quick to make out that the lamps shown are the pilots and not the main beams. Our sources also informed us that the upcoming version of the Apache RTR is merely a cosmetic upgrade as the mechanicals remain largely the same and one should not expect a lot from it.

Now, the refreshed bike gets a LED treatment for the pilot lamps, some ‘carbon fibre lookalike’ graphics, new tank extensions & side panels, new crash guard & mudguard, new & repositioned footpegs, 3D Apache logo (a la Pulsar 220) and . . hold your breath. . .an Indian flag on either side of the tail. As we mentioned above, there is no upgrade in the performance and the bike remains essentially the same.

We feel that TVS lost a huge opportunity here and has left not just us but every Indian biker pretty unimpressed. The teaser seen by us got a lot of hype within no time and now that we have seen these pics, we dare say that all that publicity was undeserved.

Like we earlier mentioned, a Pulsar 200 NS rival the upcoming version of Apache should have been. However, the only Pulsar this bike challenges is the aging Pulsar 180.