We have been reporting in details about the upcoming Ford Ecosport rival from India’s largest UV maker- Mahindra and Mahindra. Now, the good folks at 99cars.com have managed to get their hands on the spy images of the Mahindra S101 when it was doing its usual test runs in Chennai. The test mule wears heavy camoflauge and hence we can safely infer the launch of the sub-4 meter SUV is still some months away. 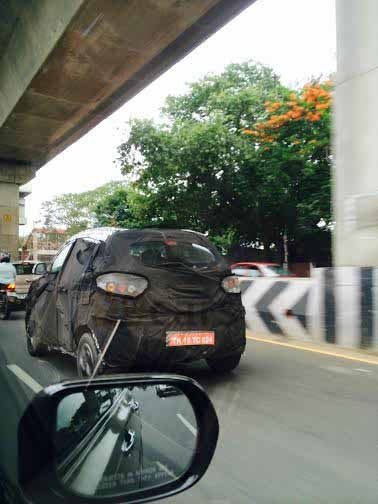 Reports suggest the Mahindra S101 will carry over design cues from its bigger sibling- the Mahindra XUV500. Also, the S101 would be dubbed as XUV300, what with all Mahindra models ending with “O”,  except the Mahindra Thar. The interiors on the S101 will also be somewhat similar to the XUV500 and will get some features found in the bigger sibling. Features like the infotainment system, automatic climate control, a multifunctional steering wheel will included in the package. Also on offer would be a host of safety tech which will include ABS, EBD, ESP and airbags.

The Mahindra S101 will use a monocoque body shell. Under the hood, the S101 will receive the 1.5-liter, three-cylinder, twin scroll turbocharged oil burner from the Quanto. Also on offer would be a newly developed 3 cylinder petrol engine. The diesel motor will have a fuel efficiency figure of around 22-23 kmpl and will be one of the most fuel efficient sub-4 metre SUV’s. Also, with the length under 4 metres, it would qualify of the lesser excise duty which will ensure competitive pricing.

Stay tuned to Motoroids for more dope on the Mahindra S101 Launch and other details.