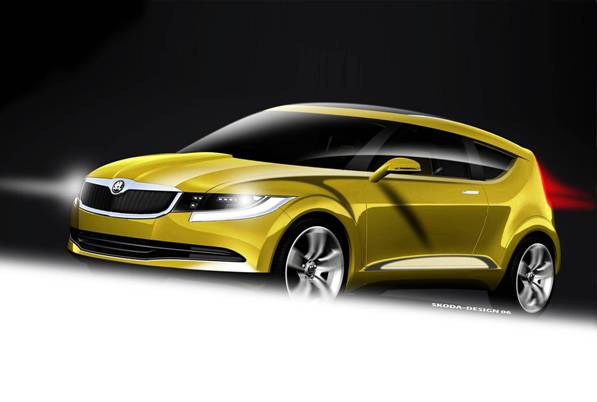 Skoda is readying the smallest car in its line-up yet for emerging markets like India as well as for developed markets like the UK. It the reports on some of the international magazine sites like Auto Express are to be believed, the company is almost ready with a prototype and test mules are running around doing reliability runs.
The new Skoda will be known as the Joyster, and will be based on the cheapest VW platform yet – the Up! The car will be the cheapest and the most fuel efficient Skoda made till date. The Up!, which was originally thought out to be a rear wheel drive car was later converted to a FWD setuo to reduce cost of development and for optimal cross-branding with Skoda, SEAT and now Suzuki.
The small car will rival international small cars like the Toyota iQ and Peugeot 107, and in India will challenge the WagonR, the Santro and the A-star. Engine options will include a 1.0-litre 3-cylinder petrol (K-series?? After VW’s recent tie-up with Suzuki) and a 1.2-litre diesel engine.

The engines will be sufficiently powerful and will deliver exceptional fuel efficiency as well. Expected the car to be introduced internationally after the launch of the much awaited VW UP! in 2012, Expect an India entry later in that year.